Posted in Latest Developments on March 20, 2009

e announce changes to the Magic Banned and Restricted lists four times every year. This quarter's B&R announcement is available here. Today I'll discuss each format that has been either been played seriously or experienced changes since the last announcement, and I'll introduce a new Magic Online–only format that will launch later this year. If you're unfamiliar with any of the previously existing formats I talk about today, this page contains information about all of them.

I used this column two weeks ago to talk about how excited we are about the state of Standard. Unsurprisingly, the DCI has chosen to change nothing.

The Top 8 of Pro Tour–Kyoto was diverse and full of reasonable decks, and the rest of the field was also quite varied. We are thrilled about the way Standard has developed since last year's World Championships. Four of five decks that went undefeated in the Swiss at Worlds were Faeries, and five of the Top 8 decks were also Faeries. There was lots of variety among the decks that went 4-2 or better in Standard at Worlds, but that variety did not show at the very top of the standings. A combination of Conflux powering up many other decks and Volcanic Fallout dropping fire on creatures the world over has hurt Faeries enough that it is just one of many available decks, and the top of the standings at Pro Tour–Kyoto reflected the diversity that was always there just below the surface.

We're having fun watching and playing Standard, and we hope you are too. We are also looking forward to seeing the Standard format in person at Grand Prix–Seattle in May. Many of us from Magic R&D will be around to observe, mingle, and perhaps even play. We hope to see you there!

Extended had a rocky start this season at Pro Tour–Berlin, where six of the top eight decks were Elves. I wrote an article after that event that acknowledged that the format looked broken, but asserted that Extended's huge card pool would give players plenty of room to adjust their decks to beat Elves. In the Extended portion of last year's World Championships, we saw exactly that. Elves was still playable, but it was very stoppable when everyone came prepared. Those six rounds at Worlds transformed Extended from a solved puzzle to a wide-open expanse of possibility, with Faeries, Zoo, and Elves as the most common players.

The Extended-format Pro Tour Qualifier season that qualifies players for Pro Tour–Honolulu is now winding down. It has been a fun season to watch, and we've seen even more variety in the qualifier Top 8 decks than we did at Worlds. There are tons of reasonable decks to play. The list of decks that people are succeeding with includes Elves, Blue-Red Storm, Life from the Loam, Zoo, Elves, and blue decks of various sorts. We like to see lots of variety in our Constructed formats, and that's exactly what Extended offers.

The format is still moving as you read this. For example, blue players are still debating whether their decks should contain Tarmogoyf or be dedicated to Faeries. The introduction of Conflux has also shifted the environment. Path to Exile is seeing play, and Knight of the Reliquary has motivated Life From the Loam-based decks to add white. If you haven't yet earned your invitation to Pro Tour–Honolulu or you want to experience high-level Extended before this season ends, your time is running out. The list of events is here. Maybe we'll see you at the Pro Tour!

We do not often get the chance to see Legacy played at high-level events. The last time we saw it was the team rounds at last year's World Championships, so we were excited to see the results of Grand Prix–Chicago. We were nervous going into the event because cards like Lion's Eye Diamond and Dark Ritual still roamed free. Magic developer Erik Lauer expressed his fear that the tournament would end up being a fight to the death between Dark Ritual and Force of Will where nothing else could compete.

Happily, this is not what happened. The results of Grand Prix–Chicago suggest that Legacy is in fact wide open. The Top 8 contained three decks each that played Dark Ritual and Force of Will, but there were significant variations among those sets of three decks, and another two players made it to the elimination rounds with neither of those two cards.

I spent some time perusing the top 128 decklists and got lost in an endless sea of variety. There were plenty of blue decks, but everyone disagreed about what they were supposed to play alongside their Force of Wills, Brainstorms, and Dazes. Some played Phyrexian Dreadnought and Stifle to win the game with. Others played Tarmogoyf, sometimes with Dark Confidant. Some eschewed creatures almost entirely and instead played Standstill alongside Mishra's Factory and Mutavault. Some players even went tribal with Faeries or Merfolk.

Of course, that's just the blue decks, and there were plenty of other decks running around. Non-blue tribes were represented by Goblins and Elves. There were decks built around both Life from the Loam and Survival of the Fittest. Some decks with as many as 43 lands were played on Day 2, as were storm combo decks with as few as 13. We are excited about the format's variety and how it plays, and we look forward to supporting it with more high-level events in the future.

We already showed you that Demonic Tutor would be part of Duel Decks: Divine vs. Demonic with a wallpaper of the week. We sell duel decks online as well as in paper, so we had to figure out what to do about Demonic Tutor in online Classic. A critical mass of seriously efficient tutors can do terrible things to a format, and Classic has followed Vintage's lead by restricting Vampiric Tutor and Imperial Seal. We knew that Demonic Tutor would be restricted eventually so we decided to do it now rather than wait until June 20.

In some sense, this is just another "No change" because the card we restricted isn't even in the format yet. I'd still like to talk about Classic a little more, because I've had an enormous amount of fun playing it in my free time over the past few months. It often feels reminiscent of Legacy. However, powerful cards like Necropotence, Demonic Consultation, and Skullclamp that are banned in Legacy continue to run free in Classic. There also aren't truly insane restricted cards like Black Lotus running around, unlike in Vintage. This means that the format is powerful, but the cards that actually decide games are almost all legal as four-ofs. Also, for a format full of ridiculous cards, it's shockingly balanced and healthy. Magic Online Classic is a unique and fun experience that none of our paper formats replicate, and I highly recommend it to anyone who hasn't played it before.

The Nekrataal and Reaper King avatars were unbalancing Standard vanguard. We have chosen to reduce the starting hand sizes for each of them by one card. This change will take effect on April 8.

less to cast. Here's an example of a tournament-winning Nekrataal decklist. Thanks to the Nekrataal avatar, Prickly Boggart and Nightshade Stinger are free, and two mana creatures can drop into play on turn one. The more frightening starts, however, involve Frogtosser Banneret. With one of those in play, Rogue and Goblin creature spells cost

less, which makes Oona's Blackguard, Oona's Prowler, and Squeaking Pie Sneak free. It also makes Stinkdrinker Bandit free to prowl, which conveniently can happen on turn one from the Banneret thanks to its haste ability. Effective April 8, the Nekrataal avatar will move from seven cards and 16 life to six cards and 16 life. At those numbers it will still be playable, but very explosive starts will be less common.

The Reaper King avatar's ability gives each creature you control +1/+1 for each of its colors. This Standard Vanguard premier event Top 8 has many examples of powerful Reaper King decks. The theme common to all of them is cheap multicolored creatures from Shadowmoor, Eventide, and Shards of Alara. Thanks to Reaper King, cards like Nip Gwyllion and Steward of Valeron become one mana 3/3s and two mana 4/4s, which are simply unheard of in normal Magic. Effective April 8, the Reaper King avatar will move from six cards and 15 life to five cards and 15 life. As with Nekrataal, taking one card away will decrease the explosiveness of Reaper King–fueled aggressive starts. 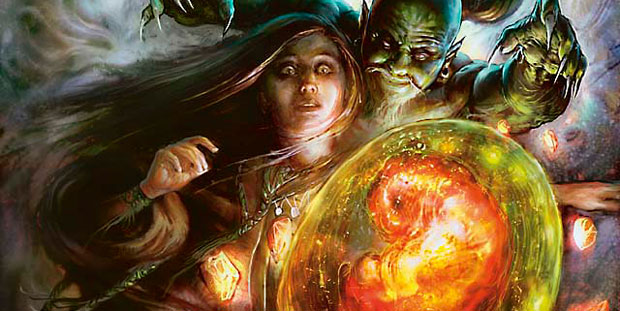 Kaleidoscope is a new Magic Online-only Constructed format. It uses the Extended card pool with the exception that all nonland cards in a Kaleidoscope deck must be multicolored. This includes gold cards, hybrid cards, and most split cards.

The format will begin with a one-card banned list. In most Magic formats, Glittering Wish only lets you choose a small subset of cards. Unfortunately, that subset of cards is exactly the nonland cards that are legal in Kaleidoscope. Glittering Wish is not quite as strong in Kaleidoscope as Demonic Tutor would be—because it requires you to put cards you want to wish for in your sideboard as opposed to your maindeck—but strong tutors are often problematic for Constructed formats. The DCI suspected that it might have to ban Glittering Wish eventually, so it decided to ban it now rather than risk destabilizing an established format later.

Kaleidoscope is not yet ready for launch on Magic Online. Official support for Kaleidoscope will begin sometime in April. We are announcing it now because it is our policy that banned list changes are announced only on the twentieth day of March, June, September, and December.

Developers in Magic R&D take the health of our Constructed formats very seriously. We love Magic, we love that you do too, and we want it to be as fun for everyone as possible. We also take very seriously the promise that we have made to change our Constructed formats only at regularly scheduled times, and we think it's important that you understand our reasoning when we change them.

Thanks for reading and thanks for playing, and I'll see you next week.

Posted in Latest Developments on March 20, 2009