Posted in Latest Developments on December 14, 2007

a little Lorwyn question that leads to a bigger one: Why does Kithkin Mourncaller help Elves? Why does Wellgabber Apothecary help Kithkin? In a tribal set like Lorwyn, there are tons of Kithkin who just help Kithkin, and Elves who just help Elves. So isn't it awfully random for Kithkin Mourncaller and Wellgabber Apothecary to affect tribes besides their own? Looking at these as individual cards, it seems incredibly arbitrary. But if you know where to look, you can see that these seemingly random cards are actually the result of a carefully connected network of tribal "bridges" connecting Lorwyn's different colors and tribes. Let me take you behind the scenes to show you how it all fits together. 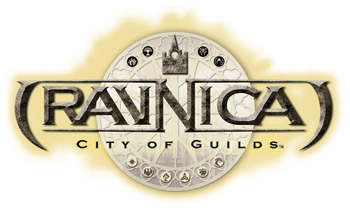 Let's back up a moment to Ravnica: City of Guilds. Ravnica's big structural theme is having four two-color guilds:

Boros. We put in enough cards emphasizing those color pairs that when you open ten packs of Ravnica, or play a Ravnica booster draft, you definitely see that these four color pairs are emphasized in Ravnica in a way that the other six color pairs are not. Ravnica's powerful gold cards in those color pairs greatly reward you for playing into the set's theme and playing decks of those colors. And each color pair has several potential strategies available, from Boros's famous beatdown side with Boros Swiftblade and Rally the Righteous to its slower control side with Sunhome Enforcer and Brightflame. Even if you always played exactly-two-color Ravnica decks in Limited and Constructed, always using exactly one of these four two-color combinations, you would still have a lot of deck diversity.

But just "a lot" of deck diversity in limited and constructed isn't good enough for Magic R&D—We want to have "tons and tons" of deck diversity in Limited and in Constructed. That's why we put so many tools into Ravnica to encourage you to also be able to build three-color Limited and Constructed decks, or even four- or five-color decks. There are tons of common mana-fixing Selesnya Signet and Dimir Aqueduct that help you build three-color decks. We built in tons of synergies between adjacent guilds, so that Selesnya Evangel can crank out tons of 1/1 Saproling tokens for your Golgari Rotwurm to chew up to drain your opponent's life. Clever players even discovered synergies between non-adjacent colors and guilds, with blue-red becoming a popular triple-Ravnica draft archetype among skilled players abusing Galvanic Arc with the underdrafted Drake Familiar. Cards like Ravnica's Helldozer even encouraged you to build mono-black decks, opening a whole new category of constructed deckbuilding.

Why is deck diversity so important to us? Because more deck diversity leads to more fun replayability over time. If there were only four possible draft archetypes in Ravnica, then once you had played each one against each of the others a few times, it might start to get a little stale. But if there are over eighteen draft archetypes in Ravnica, as there certainly were by the time Ravnica-Guildpact-Dissension came out, then every deck-on-deck matchup you play is probably pretty different from every other matchup you've played. Then you get to experience new card interactions you've never seen before, and you get to enjoy that sense of discovery and newness all over again. That deck diversity makes you eager to draft the full block for the twentieth time because you know you'll have tons of different experiences than you have before. And it's important to us to make Limited and Constructed play as fun for the fiftieth match in a format as it is for the first.

Much like Ravnica, Lorwyn's structure brings strong rewards for playing particular color combinations: those of Lorwyn's eight tribes. Once you draft the white race-matters Merfolk Harpoon Sniper, there's a definite incentive to start taking blue Merfolk as well. Encouraging people to draft white-blue by drafting lots of Merfolk is something that the designers set out to do, and one the fun parts of Lorwyn's design. But now that we had successfully accomplished that, what could we do reward people for sometimes exploring other paths?

One strategy was supporting Elementals as a five-color tribe. If you get Mulldrifter, Aethersnipe, three Briarhorns, and two Smokebraiders, you're well on your way to a red-green-blue Elemental deck.

Another strategy was sprinkling cards with clash (Fistful of Force), enchantments that care about clash (Rebellion of the Flamekin), and cards that help you win clashes (Ponder) throughout all the colors. If you follow where they lead, you can end up in color combinations having nothing to do with the tribes.

Another strategy was providing enough multi-color enablers to give players the option to go wherever they wanted, including commons Springleaf Drum, Wanderer's Twig, and Shimmering Grotto, and a cycle of uncommon five-color Vivid lands.

And another strategy was seeding in "color bridges" across non-tribal color pairs.

Across the Color Bridge

The Lorwyn tribes encourage their color combinations quite a bit. We knew green-black would be a popular Lorwyn Limited combination because of Elves and Treefolk both sharing the colors. And we knew red-green wouldn't come up as often because no Lorwyn tribe connected them. Green-black decks coming up a lot was cool - it matched the block theme of races moving into two colors. And it made sense that red-green came up less than black-green. We just didn't want red-green to come up never.

So we looked for opportunities to add a "color bridge" to the color combinations that had no tribe connecting them. They didn't need to be numerous, and they didn't need to be powerful. They just had to give players another reason to think about putting those color combinations together, and a tiny reward for doing so. We didn't want the rewards to be so large that they overshadowed the main tribal combinations. Just a little bonbon. Specifically mentioning "red and green," like having a green card with a red mana activated ability, didn't make sense in Lorwyn. As in many other cases, the language of Lorwyn isn't colors; it's tribes. So we did it using tribe-matters text. Look at the list again with the "color bridges" added in:

: Quill-Slinger Boggart (a black card that works with white Kithkin)

: Boggart Sprite-Chaser (a red card that works with blue faeries)

Blue-green is the one combination that doesn't have an explicit color bridge connecting it. Interestingly enough, Scryb Ranger is enough of a powerful green faerie "color bridge" in standard that blue-green Faeries is one of the more popular Standard format Faerie builds.

Connor and the Cloudgoat Ranger

Once you have these "race bridges" in place, the above draft example might change to something like this: Connor drafts 3 Wizened Cenn, 3 Surge of Thoughtweft, and 2 Goldmeadow Stalwart. Now all he cares about is getting more Kithkin. Then he sees a "race bridge" Cloudgoat Ranger, and he takes it for three reasons: the card is inherently powerful, it makes a lot of Kithkin creature tokens that will pump up his existing Kithkin tribal effects, and all his existing Kithkin might mean he can "double jump" the Cloudgoat Ranger by tapping six Kithkin, making the Giant a 7/3 flier. Now that Connor has the Cloudgoat Ranger, he sees a Giant Harbinger and takes it because it fetches Cloudgoat Ranger. Then he sees Thundercloud Shaman and takes it because it's powerful and he can fetch it with Giant Harbinger. Then he takes Avian Changeling because it's powerful and it combines well with both his Wizened Cenns and his Thundercloud Shaman. In this example, a single "race bridge" card like Cloudgoat Ranger sends Connor's whole draft in a whole new direction than it might have gone if he had opened no race bridges, or had opened a different race bridge or color bridge sending him in a different direction.

Across the Race Bridge

The Lorwyn development team wanted to encourage that deck diversity by encouraging all the different draft combinations I just described, giving people reasons to build decks that go beyond a single tribe. Again, those rewards don't have to be super-powerful, and we wouldn't those reasons to overwhelm the overall themes of "play blue-black Faeries, play black-red Goblins," and so on. It's enough just to have those cross-tribe rewards be present in some way.

The design team had already provided a variety of these "race bridges" when they handed off the set. The development team analyzed the ones that were there and added new ones to fill in many of the gaps. While the color bridges encourage players to bring together offbeat color combinations, the race bridges focus on linking up two tribes that share a color. We probed whether each tribe had cards that connected it to the other tribes that shared its colors. If there was no connection, we talked about adding one. In many cases, adding a new "race bridge" meant something as simple as rewriting Silvergill Douser from "...where X is the number of Merfolk you control" to "...where X is the number of Merfolk and/or Faeries you control." As long as we filled in a lot of the race bridges, we knew we didn't have to force the issue by filling in every single one.

Treefolk – Green Tribe (with splashes of white and black)

Color Bridges and the Big Time

I've heard people say you can't draft red-green in Lorwyn because there's no tribe connecting them. Personally I disagree, and Lightfoot seems to disagree too. What's the tribal connection that brings his red-green draft deck together? It's his three Elvish Handservants, with six red Giants plus Woodland Changeling, Fire-Belly Changeling, Crush Underfoot, and two Blades of Velis Vel to trigger them with. It's eleven triggers in all, plus whatever Giant or changeling spells his opponent plays. This is a perfect example of an intentionally designed color bridge, Elvish Handservant, doing exactly what it is supposed to: reward players for occasionally building offbeat color combinations by letting them pull off cool, powerful tricks, even at the highest levels of Magic. Thanks to these color bridges and race bridges, as you play more and more triple-Lorwyn drafts, you'll find deck diversity and replayability waiting for you.

The policy change in tournament-legality dates makes a lot of sense to me. It was my first "Explain the Wizards Policy Change" article, and I'm glad it seems to make a lot of sense to you as well, with over 90% of voters in the top two boxes.

Posted in Latest Developments on December 14, 2007