Posted in Latest Developments on April 10, 2009

he Shards of Alara block is built around five separate worlds, and including one planeswalker in the block for each shard felt natural. Brady Dommermuth's proposal was to include a planeswalker for each shard other than Grixis in Shards of Alara itself, then complete the pattern with Nicol Bolas, Planeswalker in Conflux. He thought that the incomplete pattern would make players expectant for what was to come, and that it would build excitement for when we finally printed Nicol Bolas, Planeswalker, the biggest, most badass planeswalker in the Multiverse. The developers and designers thought that this was a cool idea, so we agreed to go along with it.

When Conflux development began, we had to do our part to make sure that the payoff was worth it by making Nicol Bolas, Planeswalker into an awesome Magic card. This was not easy and took a lot of people a lot of work. We had to ask ourselves many questions as we worked on it, and today I'll walk you through a few of them.

What Does Nicol Bolas Do?

As the Conflux lead developer, Mike also included some requests. He asked that the designs represent what Nicol Bolas means to the designer, that it be casual friendly, and that it read totally awesome. It turned out that just about everyone wanted to help make Nicol Bolas, Planeswalker, and we got tons of submissions. 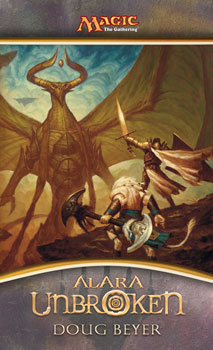 The first part of the card that was finalized was the Ultimate. Two Ultimates that almost made it came from Mark Rosewater and Brady Dommermuth. Mark's matched the character of Nicol Bolas quite well. However, it was possible in some situations for it to go off and have the opponent come back quickly. Nicol Bolas is far meaner than that. He thinks nothing of erasing one of his own minions' minds if it learns too much about his schemes, and we decided that the things that he does to a planeswalker enemy should be far more horrific than that. Few entities in the Multiverse should be strong enough to survive when Nicol Bolas is done with them. We still liked Mark's ultimate, though, so we decided to save it for a planeswalker who wasn't quite as ruthless, evil, and cruel as Nicol Bolas. Brady's submission was much crueler and meaner, but also had a playful quality to it that Mike Turian thought didn't feel quite right.

One of the other submissions had the germ of an interesting idea. When the Legends version of Nicol Bolas hits you, you take 7 damage and you discard your hand. Why can't this one do that too? Mike liked the throwback but wanted something more, so he changed "your hand" to "seven cards" and added "then sacrifices seven permanents." That ultimate received tons of positive comments from everyone who saw it, so Mike decreed that this was the final Ultimate.

How Much Does Nicol Bolas Cost?

When I started working here at the end of June, Nicol Bolas, Planeswalker cost

. A combination of his high mana cost, fluctuating abilities, and obvious Timmy appeal kept me from taking him seriously in Constructed until his abilities settled down. I then built a green mana ramp deck that used Rampant Growth, Fertile Ground, and Garruk Wildspeaker to pump out big spells quickly, and I knew that I should be playing some kind of super-expensive bomb in it. I started with Violent Ultimatum, but when that worked out pretty well I realized that I could have been playing Nicol Bolas, Planeswalker instead for a similar cost. The call of elder dragon planeswalkers was too powerful, so I moved from four Violent Ultimatum to three Nicol Bolas, Planeswalker and a Conflux.

At one point, the following playtest card was floating around in the Conflux Limited pool. 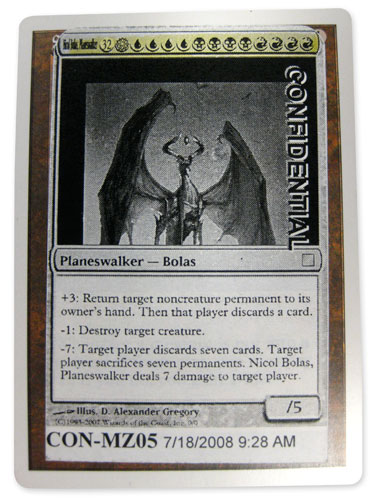 One of the following things is true:

A few people were interested in costing Nicol Bolas, Planeswalker at

to match the Legends version. Del Laugel, our ever-vigilant editor, brought us back to reality by telling us that that the name "Nicol Bolas, Planeswalker" only gave us room to use five mana symbols. The creative team really liked that name, so we stayed with

so that they could keep it.

I kept testing the card in the same deck at eight mana and found it to be just barely clunky enough for me to not auto-include it. It was still fun to play with, though, so I kept one in the deck and told myself that it would be okay because I would never draw two.

How Many Turns Does It Take to Ultimate?

The first version of Nicol Bolas, Planeswalker that we played with started at five loyalty. His plus ability was +3 and his Ultimate was -7 to match up with the other sevens in the Ultimate's text, so that meant that there was only one turn of ticking between his arrival and the annihilation of the opponent's hand and board.

Some playtesters weren't thrilled with this even at eight mana. It played very much like a sorcery with the text box "Target player peeks at the top card of their deck. If it is not totally awesome, that player loses the game." I was one of the playtesters who was uncomfortable with that game play. I enjoy games of Magic that go back and forth, and I argued that one more turn of possible topdecks would increase the feeling that Nicol Bolas, Planeswalker was a planeswalker, not a complicated Cruel Ultimatum variant.

The big thing standing in the way was the feedback that we had received about Nicol Bolas, Planeswalker from members of the company outside of R&D. The two features that received the most positive comments were that his plus ability was a whopping +3 and that it only took one turn to reach the Ultimate. Mike values the feedback we get from outside the pit and was concerned about taking away one of the most-loved parts of the card, but eventually the pressure to give the extra turn was too great.

Can We Make This Card More Awesome?

In the final Conflux development meeting, Mike and the rest of his team made two last-minute changes to Nicol Bolas, Planeswalker that made him both more powerful and even more cruel. They decreed that instead of returning noncreature permanents to their owner's hands, Nicol Bolas, Planeswalker would outright destroy them. They also decided that instead of destroying creatures, he would gain control of them. These changes made him more powerful, but also much more ruthless and unyielding. After all, why would an elder dragon planeswalker merely put off what he could deal with now? Why would he destroy a creature when he could instead rewrite its mind? 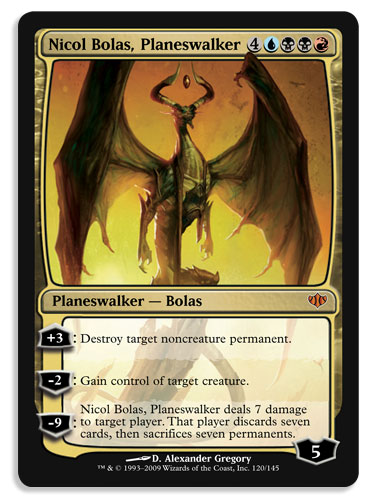 The Conflux team also decided to put the cost of Bolas's Ultimate at -9. They needed to choose a cost that kept Bolas's Ultimate from going off after one turn, but wanted to avoid double digit numbers because that would have read much worse. The only number they could choose was 9, so they went with that. These were the last changes to Nicol Bolas, Planeswalker before he went off to print.

I am personally quite happy with where Bolas ended up. He is expensive enough to keep him from ending games in the same way over and over, and it takes two turns to make him loyal enough to use his Ultimate. Because of that, however, the Conflux team was able to make him even more impressive and dominating while he is in play. That's exactly where I hoped the card would be, and we're glad that the world has embraced him so happily. 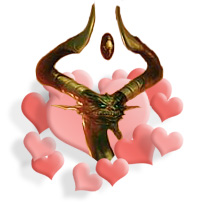 No one! This was only the second theme week dedicated to a single character that we've ever had on this site, but Nicol Bolas deserves it. He was the centerpiece of Conflux from the very beginning of its design, and we put in a lot of work to make sure that the wait for the Grixis shard's planeswalker would be worth it. I hope you enjoyed Nicol Bolas Week, and make sure to come back next Monday for the beginning of Alara Reborn previews!

The Magic web team put in tons of work to make this year's April 1 update happen. The "totally normal" draft viewer's back-end programming, joke writing, and images combined with the text and images for the From the Vault: Vaults announcement represent many man-hours of work, and we hope you enjoyed it. I was excited to have a poll that both showed off their work and was dripping with dragony goodness.

Personally, I'm in the minority that likes the original the best. I've always enjoyed nontraditional interpretations of fantasy tropes, and there's something about an enormous dragon calmly reading in his library that makes me very happy. Of course, a Dragon Plains is also pretty awesome, and that was almost enough to pull me over to that camp. I'm glad that many of you liked the humorous split card, and as always, thanks for voting.

Posted in Latest Developments on April 10, 2009