A Card Is Born

Posted in Latest Developments on September 20, 2013

The card didn't start out like this, though. Most don't—very few cards are identical from the point of creation all the way to seeing print in actual boosters. This is the tale of how just one card went from design, through development, and eventually into the booster packs that you all will be opening starting this weekend.

The story begins about a year and a half ago, with a mythic rare hole in Theros. Design is constantly recreating its file, and as it locks down the various mechanics and themes of the set, it often has to remove something that already exists and work as a team to fill that hole. I don't know who exactly created the card, but Ethan Fleischer added it to the cardfile on April 5, 2012, hitting the top-down Greek theme of the character Typhon.

Typhon, the Father of All Monsters
4RR
Creature – Dragon
Flying
Monstrous – XRRR: Put X +1/+1 counters on CARDNAME. Untap all creatures that attacked this turn. After this main phase, there is an additional combat phase followed by an additional main phase. Activate this ability only once per game.
3/3

As it moved into July, there was some unhappiness with the design.

Del 7/6: As written, the monstrous ability can be activated at any time but gives an additional combat phase only if activated during a main phase.
Mago 8/2: Weird that I can activate the ability for RRR.
Max 8/2: 3/3 is small for a Dragon.

Erik Lauer designated the card as a Dragon hole. We still wanted to have the spot for a Dragon in the set, but this exact design wasn't right. The card was doing the appropriate job of being a bomb in Limited, so it wasn't actually blocking progress. The primary focus of the set when development starts is Limited, and unless the card is so bombastic that it is winning every Limited game it is cast in, it can wait. Work needed to be done on the commons and uncommons first to get Limited into better shape before there was time to fix cards at higher rarities.

On August 26, Erik and his team came up with a design they liked more:

Typhon, Father of Monsters
4RR
Monstrous – 6RR: Put 5 +1/+1 counters on CARDNAME. Until the end of the game, CARDNAME gains "When this creature attacks, it deals 3 damage to each creature without flying opponents control and each opponent." Activate this ability only once each game and only any time you could cast a sorcery.
5/5

It should be noted that at this time, we were testing monstrosity at working only at sorcery speed. One of the big questions on monstrosity when the set was given to development was how much of the ability's fun was tied up in the combat trick, and how much was in the transformation. The two could probably be costed differently, with the sorcery version as a whole able to be a bit cheaper. While most developers preferred the instant version, there was a lot more to be learned by trying at sorcery speed and seeing what came out of it. As expected, between it and bestow, too much of the set operated at sorcery speed, and it was reverted to being at instant speed.

This card was then flagged for the first art wave. The way that art waves work in a nutshell is this: it takes time to produce art, and we negotiate with artists to find out about how many pieces we can send them at a time. We break up the set so about half of the art needs to be done in each of the two art waves that time permits us. The first art wave happens pretty soon after the set is sent to development, and so it is the lead developer's job to flag all of the cards that he or she is pretty confident are close enough to be concepted. That doesn't mean that they can't change, but the changes should work within the concept. Gaining flying, wildly changing size, or the like, are just not going to work with the art. We get to cheat a little in that large sets have twenty basic lands that count toward the total, generally several nonbasic lands, as well as Planeswalkers whose art don't heavily reflect their abilities. There is some extra room in later art waves to change cards if it has to happen, but it's good to use as little of that resource as possible—it's better to save it for cards that need to change for FFL reasons.

On September 8, Jenna Helland filled in the concepting field in the card and the name. The creative team is tasked with using their talents to create a cohesive world through the art and flavor of the cards. They do this by making sure that each card reveals something about the world it appears in. Well before the set gets into development, the creative team spends months working on an overarching style guide for the world, creating the broad strokes of what our many creature types look like on this world, and giving it some flavor. On an individual card basis, they write about a paragraph framing the action they want to see on the card, and giving that information to the artist to work from.

The concept for the card art is as follows:

Color: Red creature
Location: Your choice
Action: Design a mythic rare dragon based on Typhon, the Father of All Monsters in Greek mythology. He is massive—at least 30 feet long—with giant wings. Lightning shoots out of his mouth (or mouths—you can give him multiple heads, if you like). In mythology, he has the long, coiling body of a viper, but it's yours to decide. He should have four legs in addition to his wings. Maybe he's seen against a blood-red sky with a ring of black mountains in the background. Storm clouds move across the horizon in his wake.
Focus: The mythic rare dragon
Mood: The most fearsome of all dragons, inspired by Greek mythology
Notes: http://en.wikipedia.org/wiki/Typhon

This information is sent to the artist whose art style would best match what we are looking for. On October 22, 2012, Jeremy Jarvis selected Slawomir Maniak as the artist to do the work. He was sent the art description and any other information he needed from the Theros world guide.

In early November, we got the first sketch back from Slawomir. Everything looked great on it, so he was given the go-ahead to use that for the final art. 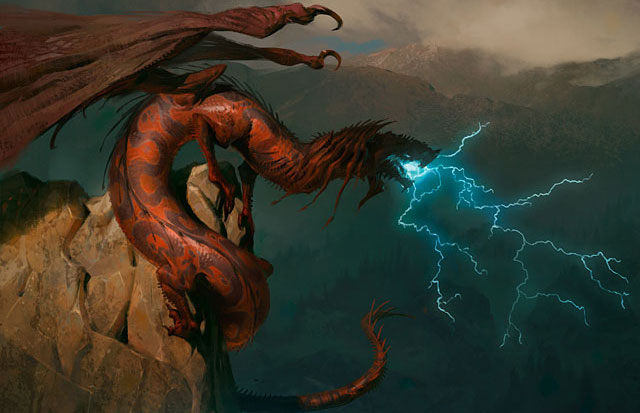 In October, the set fully entered the Future Future League for testing in Standard. As Theros matured in the FFL, we started looking for cards to change to improve the Standard environment and react to the previous year's cards. In this case, we wanted a card that could act as a foil to the Sphinx's Revelation control decks that were very popular—and which were not losing many cards in the next year's rotation. Looking through the file, we wanted to find something that wasn't doing important structural work elsewhere. The Dragon came up as a card that could change, and we were able to develop a concept that would give it an ability that would be good against the cards we were concerned about.

All of this led to perhaps the most drastic change of the Dragon's life—from a big dragon that wrathed your opponent's board into the faster and more pointed threat he is today.

Stormbreath Dragon
3RR
Creature – Dragon
Flying, Haste, Protection from White
Monstrous 2 – 5RR (5RR: Put two +1/+1 counters on this creature. Activate this ability only once.) When CARDNAME [monstrifies], it deals two damage to target opponent for each card in that player's hand.
4/4

But back to the dragon. We talked with creative, and they agreed that the ability we thought up for the dragon matched their creative vision for the card.

EVL 12/6: New Design
ID 12/10: This is a super exciting Spike card now. Players seem to be enjoying that Thundermaw is a thing, so I don't think it's a worry that this rotates in as Thundermaw rotates out. I will be testing this extensively in FFL.

On January 16, Kelly Digges, the lead editor of the set, did a pass on the file, and touched up the card to better line up with how cards are templated. He left the following comment:

KD 1/16: Order of abilities based on Akroma.

and updated the card to:

Stormbreath Dragon
3RR
Creature – Dragon
Flying, protection from white, haste
Monstrosity 2—5RR (5RR: Put two +1/+1 counters on this creature. Activate this ability only once.) When CARDNAME [monstrifies], it deals damage to target opponent equal to twice the number of cards in his or her hand.
4/4

On February 14, the card changed once again in an attempt to better fight against Sphinx's Revelation. The idea was that at

, it would be much harder to actually get the ability to go off, especially if you actually wanted to cast other spells. We reduced the monstrosity cost so that you could more easily still hold the mana up against Sphinx's Revelation decks, but also reduced the damage since before it was a little bit over overkill.

Stormbreath Dragon
3RR
Flying, haste, protection from white
1RR: Monstrosity 1. (If this creature isn't monstrous, put a +1/+1 counter on and it becomes monstrous.) When CARDNAME becomes monstrous, it deals damage to each opponent equal to the number of cards in his or her hand.
4/4

This version ended up teaching us a few things.

Stormbreath Dragon
3RR
Flying, haste, protection from white
5RR: Monstrosity 3. (If this creature isn't monstrous, put three +1/+1 counters on and it becomes monstrous.) When CARDNAME becomes monstrous, it deals damage to each opponent equal to the number of cards in his or her hand.
4/4

Of course, even beyond these comments here, there were even more small steps, conversations, and playtesting that this article couldn't begin to cover. Each and every card in a Magic set passes through a number of hands, each of which adds something to it, until it ends up where it does. While this work is most obvious on the flashy mythic rares in the set, like Planeswalkers, a similar article could be written for a card like Hopeful Eidolon or Lightning Strike, and a tale could be told about how that card came to be. Some cards may be more flashy than others, but each one plays its role in the set as a whole.

Posted in Latest Developments on September 20, 2013