Cards That Will Never Be

Posted in Latest Developments on July 8, 2005

article is a complete change of pace from my normal routine. I'm switching from dry, defensive rambling to something akin to humor. Hurray!

As developers, we tend to come up with lots and lots of cards on the fly. Something doesn't work right, make up a replacement. Environment needs a way to deal with enchantments, make something up in a meeting. Of course, not everything we come up with is usable in real Magic sets, and a good chunk of it isn't even suitable for printing in an Un- set! Today I'm going to show you a few of these cards that could never be, stuff that my coworkers and I created in fits of madness during our many hours of development. 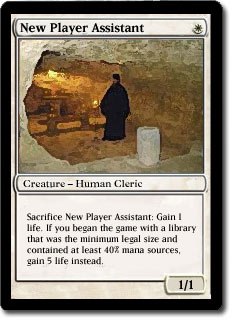 New Player Assistant
W
Creature – Human Cleric
1/1
Sacrifice CARDNAME: Gain 1 life. If you began the game with a library that was the minimum legal size and contained at least 40% mana sources, gain 5 life instead.

R&D is always discussing how we can make the new player's experience better. How can we get them up to speed on deckbuilding? By incentivising them with their most favoritest thing in the whole world—life gain! This card would have even the greenest neophyte building tight decks in no time. 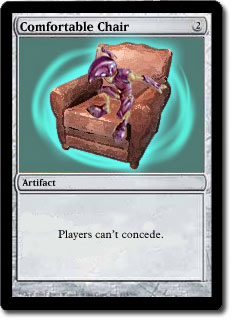 Here's an idea for our friends that get frustrated in the casual rooms in Magic Online. Drop this little gem into play on turn 2 and see what happens. If your opponents don't quit right away, you'll have a captive audience as you Stone Rain, Counterspell, and Isochron Scepter them into next week. 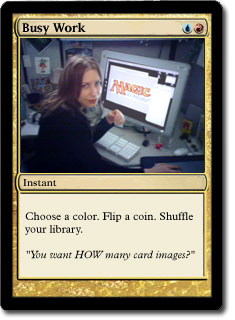 Busy Work
UR
Instant
Choose a color. Flip a coin. Shuffle your library.

Developer Mike Turian came up with this gem one day while we were talking about cards that had rinky-dinky little effects. The sad thing is, this card isn't totally useless. 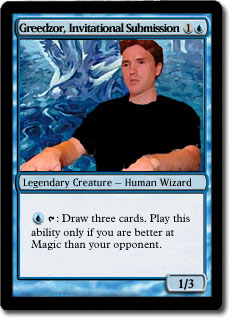 Greedzor, Invitational Submission
1U
Legendary Creature – Human Wizard
1/3
U, T: Draw three cards. Play this ability only if you are better at Magic than your opponent.

Developer Matt Place made this joke after we had looked over the card submissions from this year's Invitational participants. Most of their cards are attempts to generate huge amounts of card advantage in ways that the average player wouldn't really appreciate (at least Shadowmage Infiltrator was straightforward!). Pretty funny. 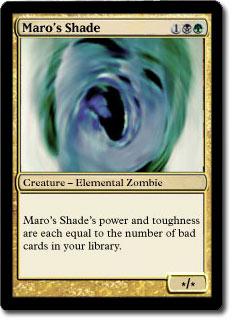 Maro's Shade
1BG
Creature – Elemental Zombie
*/*
CARDNAME's power and toughness are each equal to the number of bad cards in your library.

This creature would supply Rosewater with another bullet in his gun regarding why we print bad cards. Maro's Shade gives every bad card ever made a reason to exist! How bad can Mudhole be?! It gives this guy +1/+1 for free! 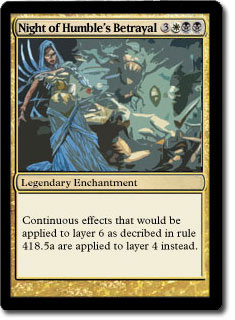 We had a long discussion in R&D about whether or not Humble could be used as removal if Night of Soul's Betrayal was in play. I don't think it can (ask Carter), so I made up this card. Now it all works just fine! 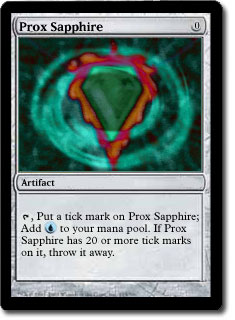 Prox Sapphire
0
Artifact
T, Put a tick mark on CARDNAME: Add {U} to your mana pool.
If CARDNAME has 20 or more tick marks on it, throw it away.

With the booming success of Vintage proxy tournaments, many players have asked us how we could get powerful old cards into the hands of new players without lessening the value of the originals. That's a tough question, considering almost all the power is protected by the Reserve List. Here's a nice attempt to find some middle ground. 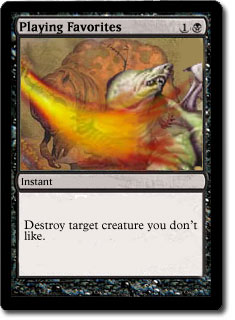 Playing Favorites
1B
Instant
Destroy target creature you don't like.

Everyone has cards he or she doesn't like playing against. Of course, your dislike never actually gets you anywhere. But what if we made the game a little more subjective? Don't like Slith Firewalker? Take a stand! Say it loud, and then off the little sucker with this card! 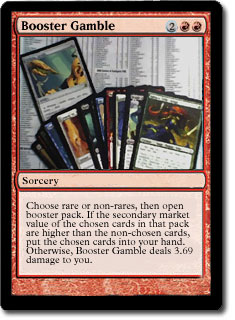 Booster Gamble
2RR
Sorcery
Choose rare or non-rares, then open target booster pack. If the secondary market value of the chosen cards in that pack is higher than the non-chosen cards, put the chosen cards into your hand. Otherwise, CARDNAME deals 3.69 damage to you.

Every time you open a pack, the big question looms… Did you get a good rare? Why not work that anticipation into the game? 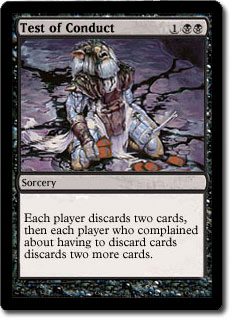 Almost every multiplayer group has that guy that complains about any little thing that happens to him. What if we made a series of cards that punished the whiny? Would it end, or only get worse?

If you enjoyed this little bout of silliness, say so on the message boards or drop me an email. Perhaps I'll do it again sometime.

Interesting. Some of us thought the number of home-sleevers would be very low, while there was one person (whose name I will not share) who was convinced almost everyone sleeved their decks almost all of the time.

Posted in Latest Developments on July 8, 2005