Posted in Latest Developments on September 19, 2008

agic R&D went out to lunch last Friday to celebrate my induction into the 2008 Magic Pro Tour Hall of Fame. In the spirit of celebration, we were telling stories about playing Magic together when the conversation turned to a subject that was extra interesting to me in particular: stories about charms!

What Makes a Charm?

Before Shards of Alara, Magic has had 25 charms. Each color has had four charms, and Invasion had five gold charms. Charms always have three different abilities, and you always get to choose one. They are always instants, and have always cost one or three mana until Planar Chaos had three two-mana charms (Dawn Charm, Evolution Charm, and Fury Charm). The three mana charms were all from Invasion and cost CDE (in R&D speak, that means one colored mana and its two allied colors of mana).

So with 75 different abilities, you would expect some repeats on abilities. In a testament to how much design space exists in Magic, there are only these repeats on charms abilities:

Bonus points if you can name the pairs of charms that share abilities. You are a true Magic encyclopedia! Go ahead and post the answers in this article's forum to show off your Magic knowledge.

If you can't, I'll give you one hint to help you figure out the pairs: Planar Chaos intentionally used abilities from other charms to show off the color-shifting and nostalgia themes of that set.

Bant Charm shares one of its three abilities with the above list.

What Does a Charm Offer?

Charms' biggest feature is their versatility. While most Magic cards offer just one option when you play them, Charms offer three. Look at Darigaaz's Charm as a good example.

, you can play a Raise Dead (black), a Lightning Bolt (red), or a Giant Growth (green), at instant speed. You pay for the options, however, as Lightning Bolt, Giant Growth, and Raise Dead each only cost one mana, while Darigaaz's Charm costs three. Options are powerful, since they mean you can get the perfect effect for any given instance.

At the celebration lunch, Aaron Forsythe talked about a Magic player who loved how Chaos Charm had three awesome abilities! The kid loved Chaos Charm so much that he traded away a Pox to get one. He must not have been happy that Pox did three things only one-third each. This story also shows why colored expansion symbols to denote rarity are such a good idea.

Mark Globus told a story about playing to qualify for the Pro Tour. He was playing versus Randy Wright. Mark was playing his Battle of Wits deck in Extended. In the deciding Game 3, Mark's 200+ card deck had offered up a turn-four Battle of Wits. Randy Wright, with Horn of Greed in play, needed to get his single Emerald Charm from his graveyard into his hand, to kill the Battle of Wits before Mark won the game in the next upkeep.

Nate Heiss offered a story to make Mark feel better about being top-decked against. Nate had borrowed Japansese Emerald Charms from me for a local tournament. He was playing a really cool deck that had Spike Weaver, Spike Feeder, and the fatty Spike, Spike Hatcher. First he would load up the Spike Hatcher with counters. Then he would combo the Spike Hatcher's regeneration ability with Nevinyrral's Disk.

In the match to make Top 8, Nate was in bad shape. Nate didn't have out a Spike Weaver, and needed one to stay alive against next turns lethal attack. He had an Emerald Charm in his hand, and drew Nevinyrral's Disk! Unfortunately for Nate, he only knew one of Emerald Charm's three abilities: destroy target non-Aura enchantment.

If only Nate had an English Emerald Charm instead of a Japanese one, maybe he would have read it and discovered that it could have untapped his Nevinyrral's Disk and won that game!

The discussion at lunch was great for me. Little did they know that I had a special preview card for this week's article...

What Is Today's Preview Charm? 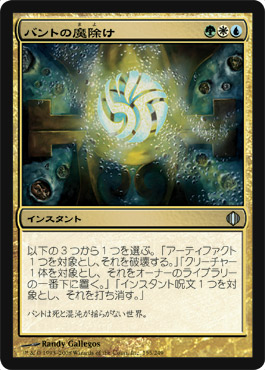 Haha! (Unless you speak Japanese, in which case, well played!) Did you know that Magic is printed in nine different languages? That is pretty cool.

Don’t worry, I’ll show you the English version. But first, an interesting tidbit about foreign-language charms.

Mark Purvis is one of Magic's Brand Manager's. In his Magic Dossier Mark ends by talking about how much of a hardcore collector of Magic he is. While it was part of his drive behind making From the Vault: Dragons an awesome product, it also means he has a lot of cool collectible misprints. Here is his ultra cool German Ebony Charm: 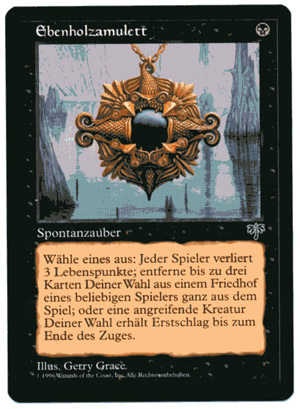 For a short while, German Ebony Charms were being produced with incorrect abilities. The correct Ebony Charm's rules text reads, "Choose one — Target opponent loses 1 life and you gain 1 life; or remove from the game up to three target cards in a single graveyard; or target creature gains fear until end of turn." This German version gives you the choice of dealing 3 damage to each player, removing a card in a graveyard from the game, or giving target creature first strike.

Quickly after the mistake was discovered, the proper translation replaced the incorrect version. Since there were now two versions of the card out in the wild, players needed to know which one was the right version, so the decision was made to add the reminder text "(correct version)" on the 'fixed' charm. To this day it is the only Magic card in any language printed with this reminder text! 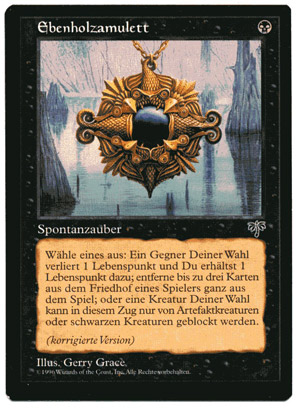 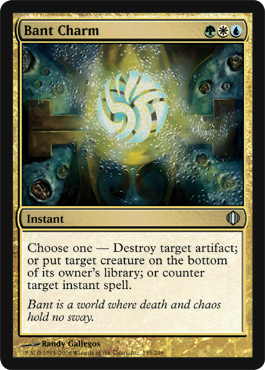 From the art concept:

Color: Green, white, and blue spell
Location: Bant, but minimal or no background
Action: Show a small, shimmering mass of magical energy about the size of a fist. The energy glints with gold, green, and blue. Its shape should symbolically suggest Bant's look/feel somehow -- up to you what that means (pristine, somber).
Focus: the small mass of magical energy Mood: An elusive treasure. Notes: This is not an object. It's a spell.
**It cannot look like a solid thing.**
Tight cycle, would benefit from all 5 to a single illustrator.

Just as Brady and his team use the concept to show that the Bant Charm contains green, white, and blue, as developers we show off the cards color with its mechanics

In the color pie, Green is the second best color at killing artifacts. This ability is descended from Oxidize (a descendant of Crumble, as they both prevent regeneration) and Naturalize (which also destroys enchantments).

The simplicity of the ability is a big reason that it has shown up on two other Charms. Hearth Charm and Crosis's Charm both used it as a red ability.

With Esper's permanents being entirely comprised of artifacts, the option to destroy an artifact will be powerful in Shards of Alara.

White – Put target creature on the bottom of its owner's library.

Condemn from Dissension was added into Tenth Edition to show how this type of ability has been added to white's color pie. While Condemn is a more specific effect, only targeting attacking creatures, for Bant Charm we bent the rules and let it target any creature.

In an older version of Bant Charm, it would give the controller of the creature life equal to that creature's power. This was done as a nod to the Alpha Swords to Plowshares. Much like Condemn this fits stronger into the white color pie, the idea of "fair trades". As development continued we looked for ways to both power up the Charms and simplify them. In that push, the life gain "fair trade" was removed. For each one of the charms, the middle color is supposed to be the most powered up effect, so we gave white a little extra shot, and Bant Charm can now hit any creature.

We are always looking for fun ways for Magic cards to interact. With a cycle of five charms in Shards of Alara, we wanted to make fun game interactions. The ability to counter the other shards' charms with Bant Charm was too good of an opportunity to pass up.

For the charms in Shards of Alara, we looked for abilities that would complement the individual shard. Bant's keyword mechanic is exalted. Since it isn't always possible to make the cycle of five charms complement each shard specifically, we wanted to make sure that at minimum, each shard's charm wouldn't go against what the shard was trying to do.

For instance, exalted encourages the Bant mage to attack with exactly one creature. So a bad charm ability to do would be, "Each attacking creature you control gets +2/+0 until end of the turn." The blue ability synergizes with exalted, in that you will often be able to protect your single attacking creature from a combat trick that would otherwise waste your entire attack phase.

Blue has had this ability from cards like Flash Counter from Legends. It is a classic blue ability, often combined with countering sorceries. Bant Charm doesn't counter sorceries because charms (in general) don't have "and" or "or" effects. For example, the two charms that give +1/+1 and trample until the end of the turn are actually "four ability" charms. We try to make sure charms only have three abilities to emphasize the "choose one" aspect of charms, letting us do cool "choose two" Commands as awesome rares.

Last week, I thought it would be fun to do a "meta-poll" to let the readers decide what this week's poll question will be. Here are those poll results:

I'll be back next week with the final preview card before the Shards of Alara prerelease events.

Posted in Latest Developments on September 19, 2008