imited in general, but especially drafting, was one of the most important additions made to Magic in its early days that has helped keep it strong and vibrant for over twenty years. It not only creates a way to showcase new and interesting things each set without requiring them to compete with the most powerful mechanics and cards of all time, but it's also an easy way to play without requiring many cards. 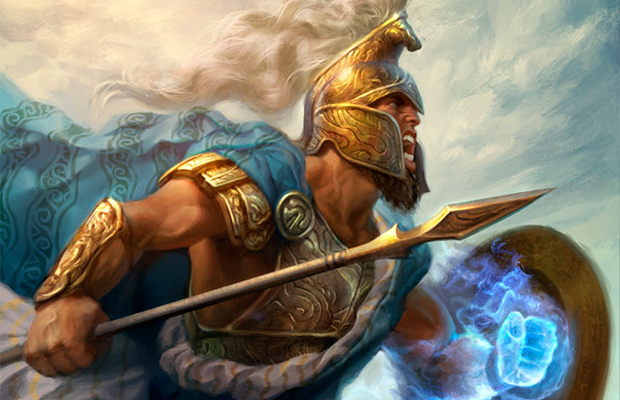 There are a lot of things inherent to Magic that really make Limited work. For example, having five colors works great because it doesn't divide evenly when drafting with six or eight people. It means there will always be some color that is underdrafted, and it creates a lot of pressure against drafting monocolors. And because you are forced to pick a second color, you will almost always be fighting one of your neighbors for some resources, which increases the interaction during the draft.

Creating a Limited environment is a lot of work, and because it is self-contained, we need to spend a lot of time balancing it to prevent it from becoming solved very quickly. That means building in complexity so that the ordering of the strengths of cards isn't enough to make all of the decisions for you. Luckily, we have a lot of solid processes in place that help us out.

One of the first things we do while designing sets for Limited is to make sure there are enough different strategies to pursue and that they are all around the same power level. We no longer make sets like Urza's Saga, where the fourth-best common being black is only notable because the three commons above it were also black. We want to make all the colors relatively even, and each of the color pairs a viable strategy.

The logistics of people drafting and over- or undervaluing different cards will, of course, lead to different strategies becoming more or less powerful over time. We start off this process in design by listing out what the ten primary decks of the format are, which is almost always the color pairs. If the color pairs focus on slightly different things, it also creates more variance in terms of how you should be evaluating cards, and it creates the most flux possible in the draft, which should lead to sets being more interesting to draft in the long term. This also helps us give structure for what the set will look like in Limited, but it also gives us a kind of lattice to build the set around. We know about what the curves of the colors should be, and about how many creatures should appear per color, and about how many cards of each mechanic to use. We will often alter the specifics later on as we develop the set, but getting something pretty standardized early on lets us figure out what aspects to change to best highlight how we want the set to play differently.

For sets where the ten color pairs are not realistically an option (like Return to Ravnica or Gatecrash) we made sure that each guild had a fast and slow deck, and that there were arc strategies by making the guilds work well with their neighbors.

You may have noticed by now that Theros contains a cycle of ten gold uncommons. These were meant to help anchor players in not only a color pair early, but to give them some direction for that color pair. A card like Battlewise Hoplite isn't just an aggressively costed attacker, it also gives you some ideas about what you should be drafting in your deck—namely things that trigger heroic. If you go down that path, you should be able to end up in a reasonable deck. There is a good possibility that going forward, we will use a little more gold in sets than we have in the past, just to provide these kinds of anchor cards. 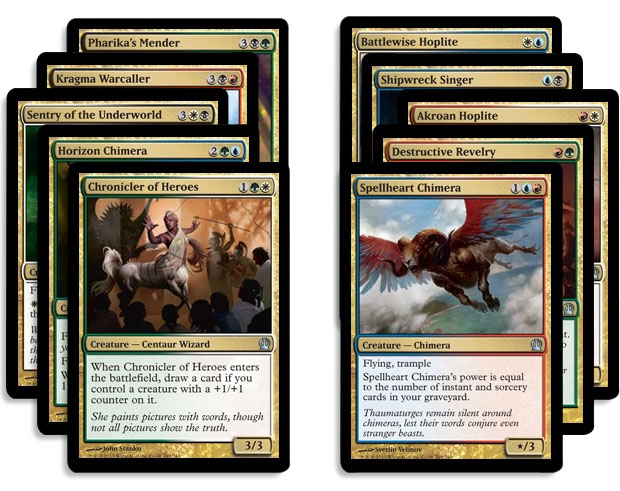 We don't want to take all of the challenge out of the experience of drafting (since that is a lot of what makes it fun), but giving players some handholds is incredibly useful. Sometimes, they are very obvious, like Spellheart Chimera, which couldn't tell you more loudly to play a bunch of instants and sorceries in your deck. Other times, they are more subtle, with cards like Coordinated Assault, which acts as a great combat trick but will also hopefully convince you to take a few more heroic cards than you might have otherwise.

This ties into one of the concepts we as a group have been working on, spearheaded by Erik Lauer—that of stealth tutorials. The fact is that drafting is hard, and not just for new players. Unless you know the set in and out, it is very easy to try and draft a deck that doesn't exist, because a card gave you bad information. Ideally, what we would like is to use the cards in the packs to actually teach you how to draft the set. That means making many of the powerful cards something that will encourage you to draft in a cohesive and powerful direction.

We could have included a card like Shrapnel Blast in Theros, but if you drafted it, you would find that the support for that archetype just doesn't exist. In that sense, putting in Shrapnel Blast would've done the player a disservice. Instead, we try to make sure that many of the powerful Limited cards we put into sets, especially at uncommon, can act as a way to point drafters and give them more directions in their picks. In effect, they are telling the players, "This is a thing you can do with this card pool. Give it a shot."

One of the goals of development is to get a set to play well at all points when interacting with it, early or late in its lifecycle, and by players with any level of experience. That means making sure that players are able to have a good experience playing with it their first time, but still have enough depth to present players with new and interesting decisions on their fiftieth or later. Again, the goal isn't to remove the skill in drafting, but to give enough directions to new players that they will continue to draft after their first time, and also to not disrupt the draft by taking all kinds of cards from different strategies in a vain attempt to create a cohesive deck that isn't supported.

As I touched upon earlier, using color pairs to structure the Limited environment does a lot for us to help bring you a better product. If R&D does one thing well, it is iterate. Play, improve, try something new, lather, rinse, repeat, etc. Getting a really great Limited environment by the time we are done developing a set is much easier if we have a reasonably good one early on, so we can figure out how to improve it. If we didn't use some kind of general guidance like the color pair directions to start a set with, it might take us weeks or even months to get the Limited environment to the point where it is interesting to draft, and that wouldn't leave us enough time to really balance it and work in the proper amount of depth. That is the problem with having cards that constantly change: they knock into other cards and make the whole process much more difficult. Once things are generally working well, and the set is fun, we can turn our attention to seeding the right cards to further increase the game play.

As an example of this, during the development of Innistrad, green-blue was set up to be the self-mill color combination, and black-green to care about graveyards (although mostly morbid). At the intersection of these, we placed Spider Spawning, which could fit to some extent in either strategy but really shone if you decided to go outside of just the color pairs and go into a three-color combination.

Setting up these strategies lets us create environments that are deep and (hopefully) have new things for players to discover as the most common ten strategies get more thoroughly discovered and evaluated. One of the best ways to succeed in draft is to get picks that are strong for your deck late in the pack, and following an underdrafted or totally sideways strategy is the best way to do that. Being able to pick a card like Memory's Journey, Armored Skaab, or Gnaw to the Bone in the last few picks is very strong, if it has the relative strength of a card that you would normally take in your first five picks. Getting the color pairs to work both gives us hints in terms of what those cards are supposed to do and gets the set to the point where we can focus on these cards.

To see more of this in action, let's take a quick peek at Modern Masters. This was a set where we had no ability to change the actual numbers or text on cards, so we had to work with what was given. We could switch cards in and out, but we couldn't create new cards to fill in a curve or to make something work. If an archetype we wanted to use didn't have enough cards, it just never would. Of course, restriction breeds creativity. We had to find something else for the color pairs to do until we found ten that had both enough cards to work, and cards that were fun. Can you name them? Well, give it a try:

Taking these as the start, we were able to figure out exactly which mechanics we should bring back in the set, and figure out where the strategies could intersect. For instance, Rathi Trapper was a Rebel, so it went into the white-black deck bucket. But it was also a Rogue, so you could draft it in your black-blue deck, attack on the second turn, and play your Latchkey Faerie with prowl. Because we knew what the ten pairs were, we were able to find these gems like this and really build around these interactions. Doing so let us create one of the most popular draft environments in years, despite only being able to actually draft the set a handful of times while it was actually in development.

That's all the room I have this week, but there is much more to talk about. Next week, I will talk about the ten color pairs in Theros and highlight how they work together in Limited.