Posted in Latest Developments on October 4, 2013

ast week, I talked about the color pairs in Limited in general, now it's time to get into more of the specifics when it comes to Theros. Hopefully, you have had a chance to draft at your local FNM, with friends, or on Magic Online. Let's talk about the various major strategies that the color pairs are providing in this set. 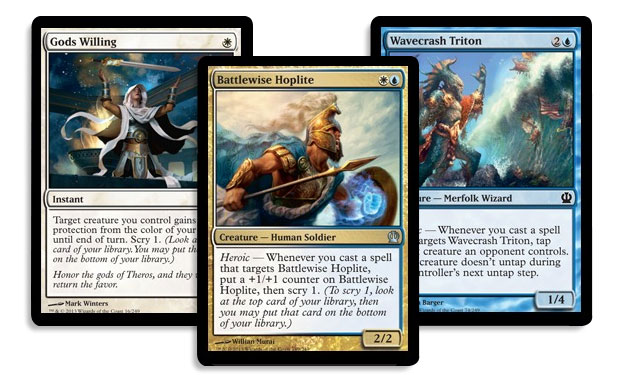 When handed over from design, most heroic was in blue and white, and we kept that as the heroic-centric colors. In truth, white is sort of the center heroic color, so white-blue, white-red, and white-green are decks that have a high heroic count.

The thing that separates this deck from the others is that it tries to use the white heroic enablers to trigger the spell-like heroic triggers in blue to both create tempo and to open up holes where its creatures can slip through. Wavecrash Triton may just look like a better-than-average Turtle, but bestowing a creature like Observant Alseid on it will not only give you a creature large enough to block a god (quite literally), but it also makes it harder for your opponent to try and plan around your attacks. 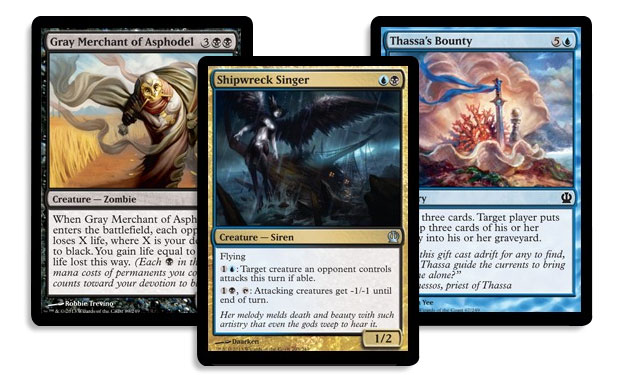 One of the great things that devotion allows is to get many of the rewards for drafting a monocolor deck without actually requiring that heavy of a focus, because we aren't counting land types. In Shadowmoor, for example, if you had two Jaws of Stone you were heavily incentivized to play twenty-three mountains, which both put your draft a little too on rails and didn't always allow for enough difference in the deck each time you drafted it.

One common strategy in blue-black is to take defensive black cards to shore up the early game like Baleful Eidolon, Felhide Minotaur, and Returned Phalanx, while playing late-game control elements like Thassa's Bounty and Mnemonic Wall. But, because many of your permanents are black, you can still get the rewards of casting Gray Merchant of Asphodel and Disciple of Phenax.

Alternatively, if you are really able to draw the game out, you might find that the mill elements on Thassa's Bounty and Returned Centaur are able to leave your opponent with a lot fewer draw steps than you have. 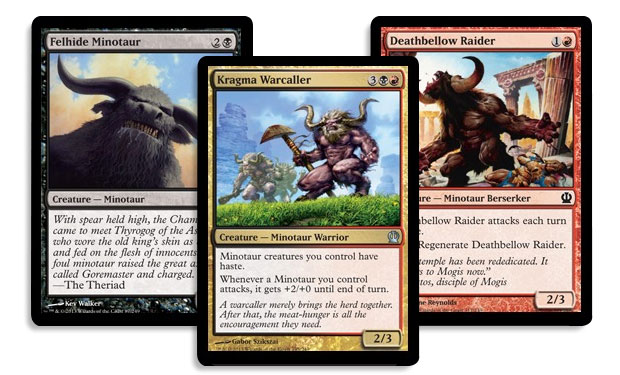 Black-red is often hard to build for, because they are the two primary removal colors. One of the tricks to getting the deck to work is to allow for that to be the given, and try and provide something to do with your deck once you have finished taking removal spells and are looking for creatures to fill in your deck.

In this case, we have gone with Minotaur tribal and have given you cards like Kragma Warcaller and Rageblood Shaman to give your deck direction. Luckily, many of the Minotaurs you will want to be picking aren't so powerful that you will be fighting people for them early on in the pack. You may want to snatch a Minotaur lord early, but you shouldn't feel pressured to take the others over removal just to get your deck to work.

Red-green is often known for its fatty ramp, and this set is no different. Red and green are the primary colors for the monstrosity mechanic, which provides you with solid monsters for a reasonable cost that can be upgraded later on. Because of the instant speed, they also can work as a kind of deterrent—it's hard to step in front of an Ill-Tempered Cyclops when its controller has six mana up. And attacking with two monstrosity creatures with mana up often makes any blocks just suicidal.

To support all of this, green has several cards that act as acceleration, such as Voyaging Satyr. The creature is just weak enough that other strategies won't take it too early, but try and make sure to snap up a few if you want to play red-green, as it will open your deck up to casting the truly late-game spells like Boulderfall that very few other decks are comfortable running. 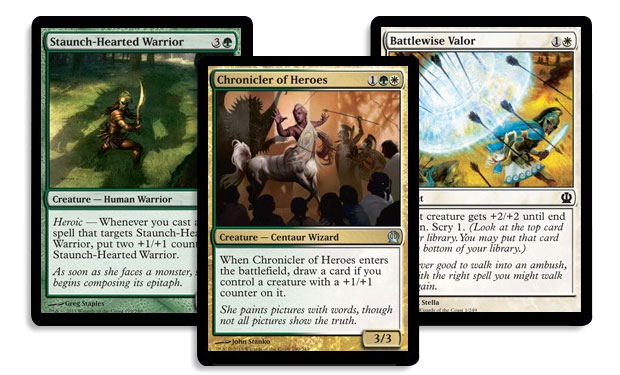 What separates this heroic deck from the blue one is that it aims to beat the opposing decks not through tapping other creatures down, or sliding by, but just going over the top. Both green and white are the colors with the most pure pump spells, like Battlewise Valor and Surge of Strength, but the majority of their heroic creatures also get +1/+1 counters when they are targeted, which can make them even harder to block. When you attack with a Staunch-Hearted Warrior, your opponent has a lot of hard decisions in front of him or her. It's easy to take her from a 2/2 all the way to a 10/10 with just two common pump spells. 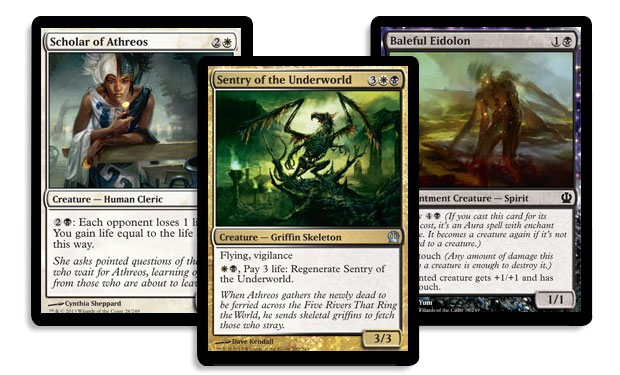 On to the enemy combinations, white-black is a controlling color pair that plays up the lifegain aspect of the two colors. Not to trigger cards like Ajani's Pridemate or Angelic Accord like in some sets, but instead to use your life total as a resource for choosing when to cast your spells. Because you can come back from some early attacks from the more aggressive decks, you can often better choose when to use your removal and set up blocks than some of the other decks.

White and black are also the two heavy bestow colors, with both white and black getting an extra common. The ability for the colors to gain life and plan for the late game will hopefully give them some extra time to sit on their Eidolons and get double use out of them. 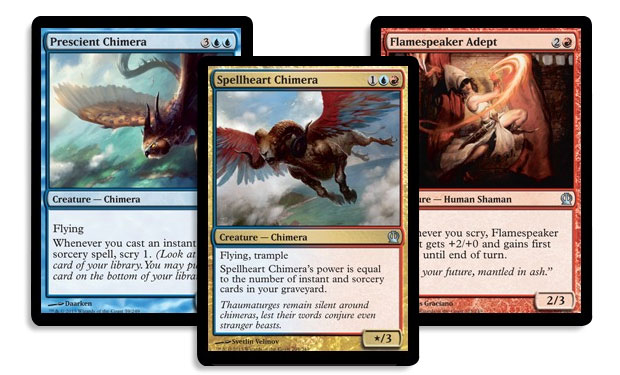 In Theros, the blue-red deck can take many forms. At times, it can be aggressive by taking cards like Vaporkin and Minotaur Skullcleaver to push through early damage, or it can be more controlling by using Omenspeaker and Mnemonic Wall to find and cast spells like Rage of Purphoros time and time again.

In either case, this deck is well set up to use scry to help and find the cards it needs at any given time. If you have out a Prescient Chimera, you not only have a creature that can attack for a pretty healthy amount, but you get to the point where all of your spells are helping to chain through to other spells and remove any blockers from the way. 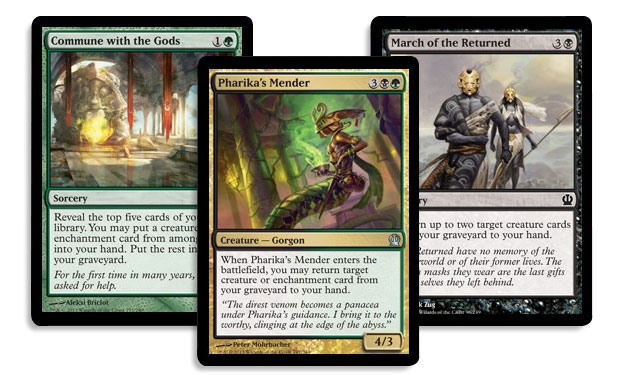 Black-green in Theros trends toward being a grindy control deck not unlike the ever-popular Rock decks in Standard from years past. Sedge Scorpion and Baleful Eidolon are set up well for blocking and trading in the early game, and a March of the Returned will get them back. This is definitely a deck that will take the opportunity to trade a card on the board one for one, and then make up the card advantage over time.

Somewhat like Innistrad block, there is a little bit of self-mill with both Commune with the Gods and Returned Centaur, which, if you have either a Pharika's Mender or a March of the Returned in your hand, quickly turn into pseudo-tutors. 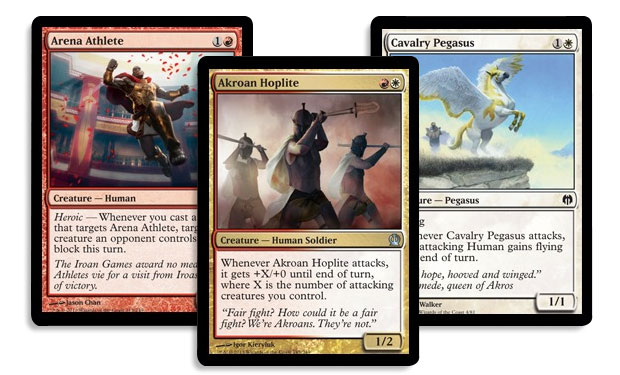 This is generally the fastest deck in Theros Limited, and the final heroic-based deck. The difference with this one is that the red cards with heroic seldom give permanent bonuses, so you need to time your turns out well to get full advantage. Leonin Snarecaster is right at home in this deck, where even though your attackers aren't large, the numbers make blocking all of them hard.

Because so many of your creatures are Humans, Cavalry Pegasus is great at picking them up and giving them a ride all the way to your opponent's face. Titan's Strength is also ideal as a combat trick that quite often just goes on an unblocked creature to put an opponent in the low single-digit life totals, where your tapping and stun effects are the most effective. 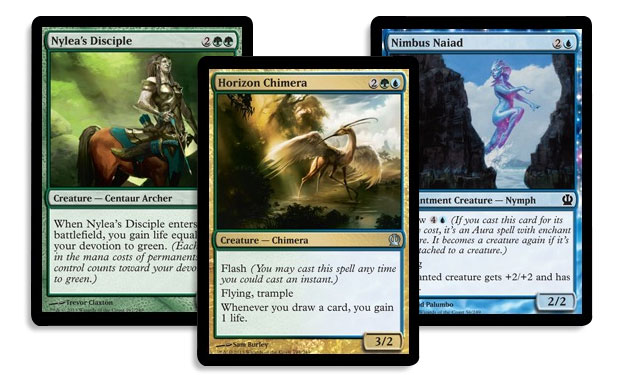 The final deck I want to point out is the green-blue tempo deck. This deck combines some of the lifegain in green, as well as the fliers in blue, to evasively fly at your opponent, all while gumming up the board.

The trick to all of this is using your blue bounce effects like Voyage's End to slow down your opponent until you can stall out the board. Green's monsters are not just good at attacking, the Nessian Asp is also quite a brick wall to get through, and you can use creatures like Nylea's Disciple to regain any life you may have lost in the early game. Once you have the ground stalled, your fliers, or even a creature like Agent of Horizons, are free to get by.

Of course, if you can save your Nimbus Naiad until the midgame, the Asp—or, Heliod-forbid Vulpine Goliath—make Dragon-sized fliers.

Off the Beaten Path

Those are the main directions that we pushed the decks, but that doesn't mean that is all there is to draft. There are a lot of cards out there that support other strategies. It's possible to build a slow and grindy red-white deck on the back of removal and larger creatures than your opponent, or an aggressive black-blue deck that kills with evasion. The point isn't to limit the number of things that can happen in draft, but to instead give the color pairs a definite center direction to help balance and smooth out the Limited environment.

As Theros drafting begins online, I am looking forward to seeing what kind of decks the community is able to come up with that never came up in our playtesting. I'm sure there is more than one streamer who will develop an unorthodox strategy that we never tried, and that is part of what makes drafting so great. We playtest Limited a lot, but we won't discover everything—if we knew it all, then there is no way the environment would be deep enough to keep people drafting for the long haul. I am confident that Theros's main strategies provide more than enough to keep players interested for quite a while, but that people will discover even more "hidden" archetypes that we didn't explicitly plan out that will keep the format fresh for even longer.

Posted in Latest Developments on October 4, 2013