efore I show you today's preview card, I'd like to introduce you to the development team for Rise of the Eldrazi.

Matt Place (lead) – Rise of the Eldrazi marks Matt's third time leading development on a Magic set. He was also the development lead for Eventide and Alara Reborn, and he guided the direction of our playtesting format, the Future Future Leage (FFL). Matt worked closely with design lead Brian Tinsman to bring Rise of the Eldrazi to life. Matt and I were roommates when I first moved out to Seattle, and I have spent more time discussing Magic development with Matt than with anyone else. Matt decided to leave Wizards this past Spring, and Magic will miss him.

Erik Lauer – Erik was Matt's right hand man on Rise of the Eldrazi, the only other full-time developer on the Rise of the Eldrazi team. If I have spent the most time discussing Magic with Matt, then Erik and I have discussed Magic second most. Erik brings his strong math and logic background to Magic development. He was the lead developer of Magic 2010 and also the upcoming Magic 2011.

Mark Rosewater – If I need to introduce you to Mark Rosewater, then "Welcome to Daily MTG!". Mark not only serves as Magic's head designer but also, on occasion, dips his toes into the development waters. The line between design and development is small, and having a team member with designer skills and instincts brings valuable guidance to any development team. If you are looking for something to read for the next few months, check out Mark's article archive.

Gregory Marques – Greg impressed Mark Rosewater with his design chop at a Pro Tour. Mark gave Greg a shot to do design on Fifth Dawn. From there Greg came in house and worked sets including Magic 2010 and Rise of the Eldrazi design and development. Every Magic set has a person who provides the link between design and development and for Rise of the Eldrazi, Greg was that person. Greg left Wizards last year.

Mark Globus – Mark joined Wizards after getting noticed through the "Great Design Search." Mark is currently Magic's Producer. In that role he gets the opportunity to work directly with both design and development. He has done design for Shards of Alara, Conflux and Worldwake while being on the development team for Zendikar and Rise of the Eldrazi. Mark is currently leading a yet to be officially announced set.

Now that I have introduced the development team for Rise of the Eldrazi, let's take a step back and talk about a card that was your first glimpse of the Eldrazi. I'm sure you are familiar with it: the Eye of Ugin.

Originally, Eye of Ugin was a land that tapped for

and could also "wake up" into a 7/7 Eldrazi with annihilator 1. Along with the uncommon Dread Statuary and the cycle of rare creature lands in Worldwake, this Eye of Ugin woud be a proud mythic rare as the largest creature land in Worldwake. There had been talk of doing a common in Rise of the Eldrazi that had the same stats and abilities as the creature the Eye of Ugin would wake up into. The idea was that the first creatures through the Eye would be the "little" scouts of the Eldrazi.

Normally when working on a Magic card, development and creative work separately but in concert. A card will have a concept written for it that matches the card's mechanics, but the art isn't complete until later. For instance, Raging Ravine from Worldwake went through a number of iterations before finally gaining "When Raging Ravine attacks, put a +1/+1 counter on Raging Ravine." But the entire time I knew that Raging Ravine would look like a land that was waking up and attacking.

Often design or development will create a card and give it a silly concept. Take the card Moose and Squirrel:

You know this card by its actual name, Ambassador Oak. Mark Rosewater submitted Moose and Squirrel into seven different Magic sets before it finally found a good fit with Morningtide. In this case, creative needed to find a concept that better fit the Morningtide set. They came up with the great fit of a 3/3 Treefolk Warrior that brings a 1/1 Elf Warrior buddy along with him. Here creative took our design and matched it with the world they had made. 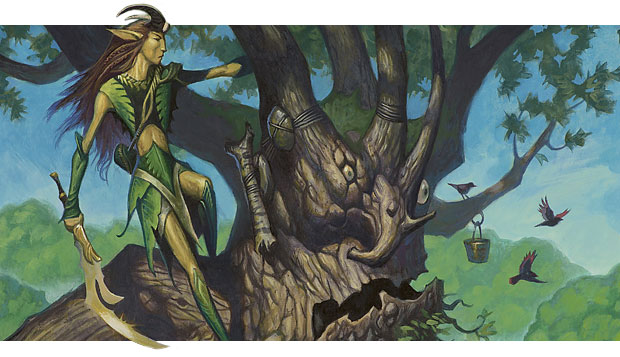 Since Eye of Ugin represented such an important place in the storyline, I knew I would need to work closely with creative to make sure the card mechanically fit the storyline well. I went to Magic creative director Brady Dommermuth to gather his opinion on Eye of Ugin. The sticking point for him about Eye of Ugin was that we had it waking up into a creature. As you saw in the very first Rise of Eldrazi spoiler, the Eye of Ugin was supposed to be holding back the Eldrazi, not waking up into one!

When I took this information back to the Worldwake development team (myself, Erik Lauer, Tom LaPille, Scott Johns, and Mons Johnson), they were quite disappointed. We really enjoyed having a land that woke up into a creature so gigantic. For a short while we had Eye of Ugin start making 7/7 Eldrazi creature tokens. Brady didn't feel that was a good match either, and it had the added complication of introducing the new frame and new keyword a set early. The Eye of Ugin needed to go back to the drawing board.

Next Saturday, the Eldrazi will awaken at Prereleases around the world, and you will be able to get Eldrazi like the Hand of Emrakul. 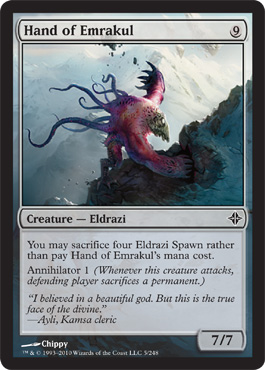 Sweet, sweet, sweet—and to think this is one of two common colorless Eldrazi in Rise of the Eldrazi! Hand of Emrakul can be cast as early as turn three! Playing Limited I have never had such a giant creature in play as quickly as the Hand of Emrakul can enter the battlefield. Just sacrifice four Eldrazi Spawn and you will have a giant annihilator in play in no time at all.

After you open the Hand of Emrakul at the Prerelease, you will want to build your deck around getting out enough Eldrazi Spawn to cast Hand of Emrakul for free. Look toward black, red, and green for the cards that create Eldrazi Spawn. White and blue have level up creatures and totem armor, but they don't have any cards that make Eldrazi Spawn. Since you will be looking to maximize the number of Spawn makers in your deck, black, red, and green will be the key colors to getting to four Spawn quickly.

Here are a few good cards in the Visual Spoiler that create Eldrazi Spawn tokens: 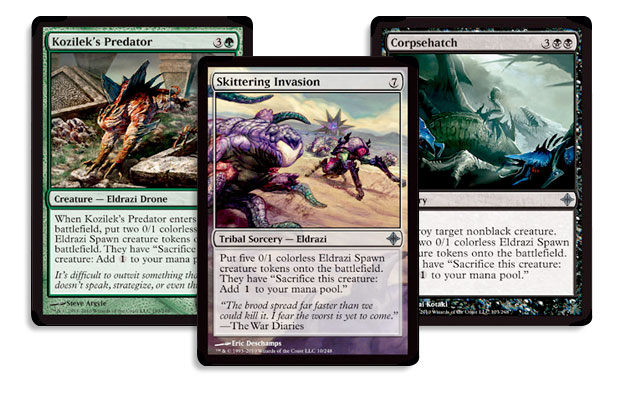 Magic R&D needs to choose between two options when making new mechanic like the Eldrazi Spawn, the level up creatures, or the totem armor enchantments. We can either place the mechanic in all five colors (like kicker, Allies, and quests) or dedicate the mechanic to only select colors (like all of the Ravnica / Guildpact / Dissension guild mechanics).

In the case of Ravnica this decision was relatively easy, as giving each guild its own keyword allowed for each guild to have a clear unique flavor. In Zendikar we liked spreading out Quests to all colors to show off the different cool things that things like quests could offer. In Rise of the Eldrazi, we split the difference. Level up creatures will be available in all five colors, while Totem Armor is in green, white, and blue. As I mentioned before, Eldrazi Spawn are in black, red, and green.

With Rise of the Eldrazi being played as a standalone large set in Limited, we wanted to consolidate the strategies into fewer colors. This lets us put mechanic enablers into those colors to give focused themes to draft around. For example, there's a cycle of five new "Invokers" at common, each of which has an activated ability that costs

. The red and green Invokers in particular work very well with numerous Eldrazi Spawn and with big colorless Eldrazi like Hand of Emrakul. 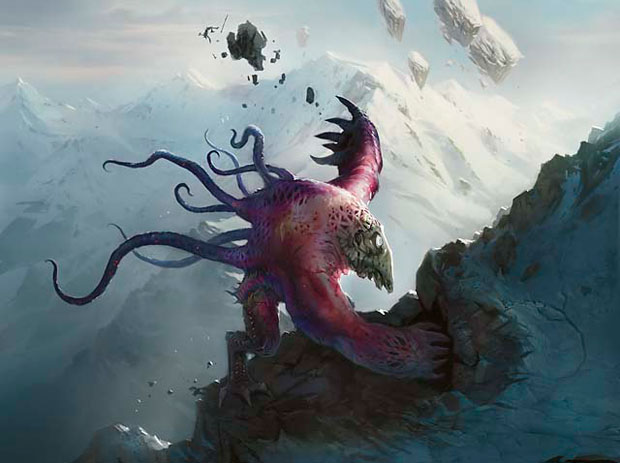 Of course you don't need to sacrifice four Eldrazi Spawn to cast the Hand of Emrakul. You can just pay nine mana (and maybe sacrifice a couple Eldrazi Spawn to save a mana or two). Before Rise of the Eldrazi I hadn't cast a nine mana creature in quite a while in a game of Limited. Card drawing and mana acceleration will be your best friends to help cast all of the amazing Eldrazi available to you next weekend at the Prerelease.