Confessions in an Armory

his week is Living Weapon Week on DailyMTG.com. While I wouldn't say that I've been dreading this, it would be fair to say that I wasn't looking forward to it. Living weapon brings up a bit of a sore spot. When I'm wearing my player hat, I love Equipment as much as the next person. As a developer, though, I have a confession to make: I'm pretty much terrified of Equipment.

You may have noticed lately that we like it when Magic is mostly about creatures. We think Magic is more fun when you are interacting with your opponent on a regular basis, and creature combat is one of the most consistent ways that players interact with each other. Cards that have to do with this axis of interaction, then, should be things that we like. 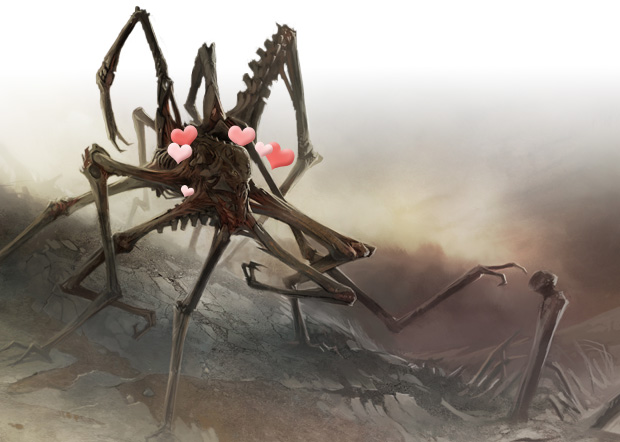 Generally speaking, they are. We love Giant Growths. We also love creature-pumping Auras, which gave us cards like Moldervine Cloak and mechanics like totem armor. From day one of Magic's existence, it's been fun to put Holy Strength on Serra Angel and serve for 5. Equipment are clearly part of this lineage, and it's just as good a feeling as a player to throw a Darksteel Axe on a Leonin Skyhunter and get in for 4 instead of 2.

Equipment, however, has a dark side that Auras and Giant Growths don't have. I already said that we like Magic to be about creature combat. One important facet of this is that we like it to matter what creatures you have. We want Ogre Resister to be more impressive in play than Iron Myr, we want Alpha Tyrranax to outshine Ogre Resister, and we want Quilled Slagwurm to be more awesome than all the rest of them. If there isn't any difference between these cards, the actual combat wouldn't be very interesting at all. Rather than seeing what happens when creatures fight and having the biggest ones survive, you would just count up who had more creatures, then the person who had more would win.

Equipment can threaten our ability to use the differences between creatures to create deep interactions. Consider the card Bonesplitter. 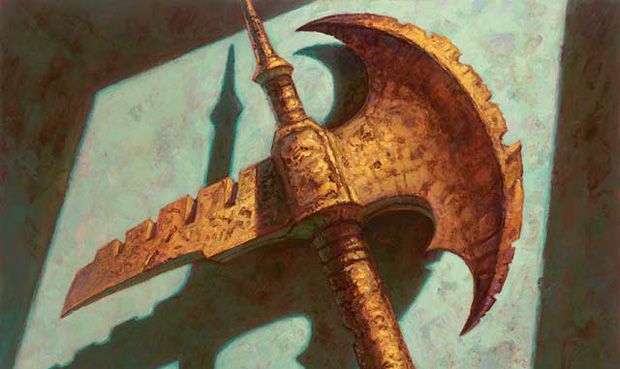 When you add a Bonesplitter to the table, the math I just described starts to break down. An Iron Myr with a Bonesplitter happily trades for an Ogre Resister. That same Ogre Resister could pick up the Bonesplitter and go after a Fangren Marauder. When you have a card like Bonesplitter on the battlefield, you can use your creatures to "trade up," having them die in combat while taking out a more impressive base body. Hopefully, that leaves behind your better creatures, which will then allow you to run over the smaller creatures that your opponent has left. In practice, the more Bonesplitters there are in your deck, the less you care about what individual creatures you have. They'll be good enough to trade in combat anyway, so why bother making sure you have big ones? We like it better when you care about what creatures you have, so we'd rather have people using Bonesplitter to do noble things like attack for 5 in the air with Somber Hoverguard, but we recognize that our players are smart. Eventually, they'll figure out what is most powerful and start doing that.

The main problem that Equipment have is that they need creatures before they do anything. It doesn't matter how good your three Equipment are if you can't muster the one creature to weild them. The original Mirrodin draft environment was littered with Equipment, and it was very easy to accumulate so many that you wouldn't have enough creatures in your deck to use them all. It's rare that a Limited deck can play five Equipment profitably, because that doesn't leave a lot of room for both the creatures to hold them and other support spells. This is one of the important natural features of Equipment that keep them balanced.

From a design standpoint, living weapon is a very nice mechanic. It's elegant and clean. From a player's standpoint, it solves one of the biggest problems that any Equipment has: needing to find another creature to put it on before it does something. As a developer, I recognized its elegance, but I also saw some danger. I just said that living weapon "solves the problem" of needing a creature. To developers, that problem is a feature, not a bug, since it's a part of what makes Equipment balanced. Living weapon removed that balancing factor, and it was our job to figure out what that meant for our cards. 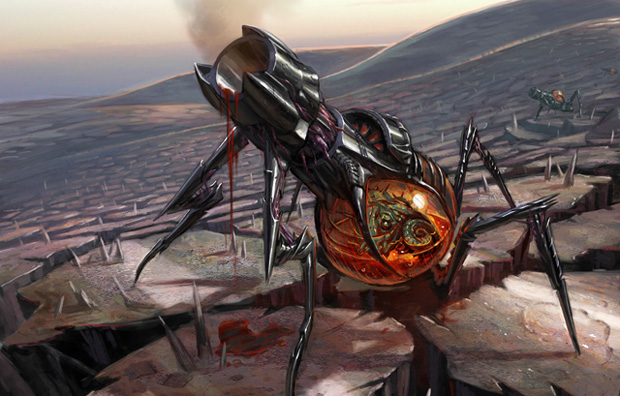 Our earliest playtests with living weapon showed us how powerful just dropping the mechanic onto cards was. The inconsistency introduced by needing a creature was, in fact, one of the most important reasons that Equipment worked out fine in practice. Including too many cards that removed that inconsistency reduced the opportunity cost of including tons of Equipment, which caused us to stop caring about what creatures we had and just trade up all the time.

We reacted to this by trying to find some space for living weapon cards that included some kind of natural balancing that kept games from being about trading up. Mortarpod is one of these designs. While it's a living weapon card that does enable trading creatures for other creatures, it doesn't let a 1/1 trade with a 3/3. Instead, you're often trading down, using the germ token that comes with the Mortarpod to finish off a creature that didn't quite die in a combat. Despite this, several skilled players list Mortarpod as one of their top uncommons in the set.

The other card on which we used a clever design is Bonehoard, which introduces inconsistency in an entirely different way. If you slam this card on the table on turn four, it might only be a 2/2, which is not the sort of thing you're excited about. On turn ten, though, it can be monstrous. The card is not exciting early on in the game, which is why it can be so strong later on. This card was the result of Ken Nagle going on a quest to figure out how we could make living weapon cards that weren't always super awesome, and I'm very pleased with how it turned out.

Although the more sideways Equipment were nice ways to get around the potential problems of living weapon cards, we knew that we were also going to need some more traditional Equipment with the mechanic. The only knobs we had on those would be mana cost and equip cost.

When Mirrodin Besieged was being released, many players commented derisively about the poor-looking numbers on Strandwalker and Skinwing. Their equip costs are

, respectively, which are quite large compared to traditional Equipment. However, let's take a page out of Erik Lauer's playbook, and compare them to other Limited cards that most people are happy to play.

Strandwalker's first form is the same as Giant Spider. It costs one more mana, but is colorless instead of requiring green. Giant Spider is one of the strongest green commons in most core set formats, so paying five mana for a colorless one is quite reasonable. Then, when you're done with that, you can give any of your other creatures a massive +2/+4 and reach. That's pretty huge, especially if your opponent was planning to win in the air with flying creatures. Unless they destroy the Strandwalker, there will always be a massive reach blocker running around to swat their Wind Drakes out of the sky.

In a similar way, Skinwing is a colorless Wind Drake for only one more mana. Wind Drake isn't the strongest blue card in most sets it's in, but it's quite good. We usually take it between 3rd and 5th pick in core sets, so we use it as a comparison point for other Limited cards. ("Would you take [insert card here] or a Wind Drake?") Although Strandwalker's ability to grant reach is nice, flying is much more potentially back-breaking. A 7/9 Fangren Marauder with reach is good against blue, but can be chump-blocked all day long; a 7/7 Fangren Marauder with flying kills you in three hits over your ground creatures. This card's "second life" is enormously powerful compared to Strandwalker's.

I have played versions of these two cards that had less expensive equip costs, and they were oppressive and frustrating. We kept having to raise the equip costs until that wasn't true anymore. We knew that we were making the cards look unappealing when we did this, but we think it's more important that Magic be fun overall than that each individual card look as exciting as possible.

Living weapon was a challenge for us, but I'm happy with how things have turned out. Flayer Husk and Bonehoard are seeing some constructed play, Mortarpod is a bizarre card that is much better than it looks and has given people plenty of discovery moments, and Skinwing and Strandwalker are both strong workhorses that make their presence felt when played in Limited. I don't expect that any of these cards will be what Mirrodin Besieged is remembered for many years from now, but there can be other cards for that. As long as players are still around a year from now to remember them, living weapon did its part for Magic.