arlier this week, Mark Rosewater wrote about how the rebound mechanic was one of the last pieces to be added to the design of Rise of the Eldrazi. By that point, the designers were almost done with their work, and although a few of their rebound cards made it all the way through to print, most of their effort was focused on making sure that rebound was a fun mechanic overall rather than making sure that individual rebound cards were as strong as they could be. Once they were satisfied that it was fun, they left the task of worrying about each individual rebound card to the developers.

Matt Place and the Rise of the Eldrazi development team spent some of their early time wrestling with those cards and trying to figure out what effects made for good rebound cards. As it turned out, there are a number of perfectly fine Magic cards that make for pretty dumb-feeling rebound cards. For example, pretty much anything that increments or decrements something without caring about the board, felt silly. For example, the text boxes "Draw a card. Rebound", "Gain 2 life. Rebound", and "CARDNAME deals 3 damage to target player. Rebound", all make you wonder why you're doing the extra bookkeeping when you could just have everything up front and the effect would be pretty much the same.

The Rise of the Eldrazi developers found three main categories of effects that were natural and interesting to put on rebound cards. They are as follows:

Upon discovering that some effects didn't feel worth the bother of doing twice, the obvious thing to do was identify effects that were worth the delay. One of our challenges was that there weren't a ton of them. Making a creature unblockable was an obvious choice, and that's where Distortion Strike came from. However, we had to reach a little further to find more of these. Relentless Assault is a place we sometimes go, and it turns out that attacking twice per turn is a fine thing to do twice. Surreal Memoir, on the other hand, was less obvious. My initial impression was that a random Regrowth would not be particularly interesting to do twice, but I didn't take into account how good it was to cast another rebound card twice. The first time I returned a Staggershock with a Surreal Memoir was a revelation, and that turned me into a believer. 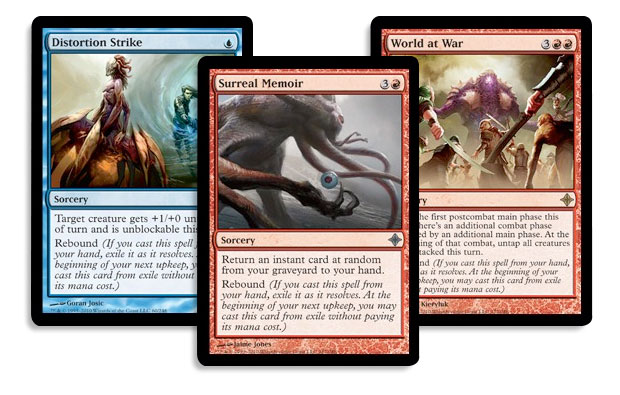 Effects That are More Interesting With a Delay

One of the interesting things about Time Spiral's suspend mechanic is that both players get to see a little bit of what is coming, and play accordingly. Cards like Greater Gargadon and Curse of the Cabal played in this space even more explicitly, as they even gave players things to do while they are suspended.

The first rebound card in this space that I interacted with was called Play Your Stuff. Can you guess which card it is now?

I don't know if Rise of the Eldrazi lead designer Brian Tinsman created Play Your Stuff, but I do know that he controlled what playtest names cards got in design, so the name is likely his. That tells us that he understood the effect that the card would have on the game. While it's in the exile zone, your opponent has a mission: get cards out of his hand. The mission aspect of Play Your Stuff was the best part of it in game, so we looked for other ways to achieve that. This exploration led us to two categories of spells. The first being cards that do different things depending on something that the opponent can influence, like Recurring Insight does. That led us to Survival Cache and Nomads' Assembly.

The other thing we discovered is that while it isn't particularly fun to constantly have removal spells staring at you in the exile zone waiting to go off, it is interesting to have that experience every once in a while. This doesn't give you a mission in quite the same way that a Recurring Insight does, but it does change the way you play. Staggershock and Consuming Vapors let us hit this note a little bit without being overbearing. 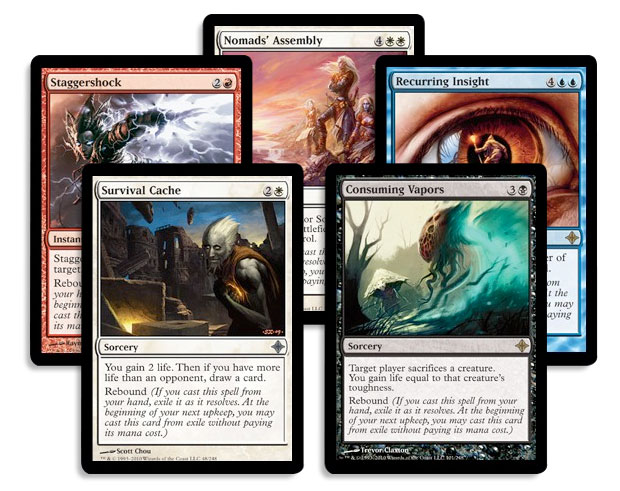 Effects That Are Interesting as Both Instants and Sorceries

In my mind, easily the most successful of the rebound cards to come out of design is Prey's Vengeance, originally known as "Big Small Big". Other than in name, the card never changed from design to print. We loved it for several reasons. One is that Giant Growth is a fun card. We love instants that mess with combat. Magic can get a little dry if every combat step goes exactly as planned, and cards like Giant Growth are a big part of why some of them don't. On the other hand, there is also a simple joy in making a creature huge ahead of time and bashing with it, as is evidenced by the popularity of cards like Monstrous Growth. Making a creature big is compelling no matter when you're doing it, so Prey's Vengeance is fun both when you use it the first time and when it comes back in your upkeep.

There are, of course, plenty of instant speed combat tricks that work well with rebound, so we tried to choose a few that worked differently from each other. Prey's Vengeance was so fun that we wanted to keep it, so we looked to other colors for different twists. Emerge Unscathed can be used as a combat trick, but just as often the first time around it saves a creature from a removal spell, then comes back to give a creature whatever protection it needs to get past enemy blockers. Virulent Swipe is at its best when helping a creature take down something far bigger than itself then comes back again to help next turn. All of these play a little differently, so it's not easy to maneuver around all three of them at once. 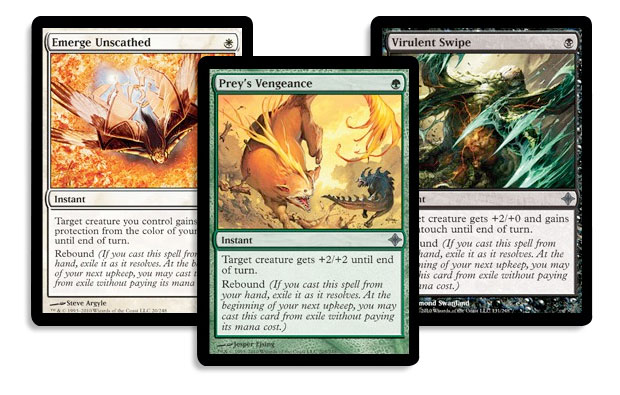 Every time we do a mechanic, someone inevitably brings up the idea of making a card that says "All your

There are times, of course, when it's totally lame. We could have made a card in Shards of Alara that said "Creatures you control gain exalted." That would send a confusing deck building message: play tons of creatures in your deck, so you can attack with only one of them each turn. Generally speaking, keywords that push you toward building a linear deck don't lend themselves to this kind of card. If you were interested in all your cards having that kind of ability, you would probably have built your deck so that they already did, and in that case you wouldn't need a card to help you.

On the other hand, sometimes this strikes us as totally awesome. One example of this is Maelstrom Nexus. Although players can and have built decks around the cascade mechanic, such as Hypergenesis this past Extended season and Swans of Bryn Argoll-Seismic Assault combo in last year's Standard, there is nothing intrinsic to the mechanic that makes doing so particularly advantageous. Far more decks play cascade cards like Bloodbraid Elf and Bituminous Blast with no particular self-interaction in mind. Rebound is more like cascade than exalted in this way, so the idea of all one's spells suddenly gaining rebound seemed cool rather than lame. Therefore, we made the card.

Before I sign off for this week, I'd like to congratulate Lurebound Scarecrow on nearly sneaking his way into this article. His rules text made a compelling case for inclusion, and I'm not sure I would have caught him if he hadn't been an entirely wrong card type.

By the time you read this, I'll be in San Juan, Puerto Rico to attend our second Pro Tour of the year. The format this weekend will be Zendikar block constructed. As an academic exercise, I spent some time going over the Magic Online Zendikar block tournament results and playing some block myself, and I came up with a block deck list I'm fairly confident in. Unfortunately, I can't play in the Pro Tour myself, so I'll never know how well I would have done. If you want to play against me this weekend, though, you can find me in the Champion Challenge area. I look forward to crushing people three at a time as I preview Archenemy, this summer's multiplayer Magic product, and the first paper Magic product for which I served as the lead developer!