Posted in Latest Developments on June 4, 2010

t's getting close to the time when we start telling you in earnest about Magic 2011. From Magic R&D's perspective, however, doing that is impossible without talking about the legacy of Magic 2010, the first core set we made under our new model. To some degree, it was an attempt to reboot Magic, and to do what we now wish had been done from the beginning. We got many of those things right, but while making Magic 2011, we learned that some of the things we did in Magic 2010 couldn't be done again, and we also discovered a small number of things that we still did a little wrong. Today I'll talk about a few of each of these things. 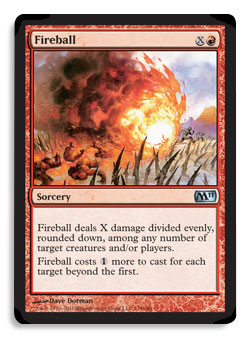 Some cards with simple, appealing names and concepts don't actually have simple text boxes. Fireball is one of them. Fireball's history goes all the way back to Beta, a set that had many beautifully simple cards but also many cards that used complication to get top-down flavor across. As far as I can tell, Fireball was an attempt to put the Dungeons & Dragons spell Fireball on a Magic card. One of the original target audiences for Magic was roleplaying gamers, so Magic's Fireball has the splitting clause on it because Fireball could also hit multiple enemies. The actual mechanics behind Fireball's splitting changed from edition to edition, but Fireball is clearly recognizable as a translation.

The resulting Magic text box is, frankly, pretty weird. It talks about rounding, any number of targets, and paying extra mana. However, that text lets you do a bunch of cool things, and I would say that you haven't lived until you've paid three mana to fireball three Illusionary Servants for zero each. Also, the legacy of Fireball lived on in games other than Magic, where game designers with similar backgrounds to the first Magic designers made similar fireball spells that could also hit multiple targets. The Dungeons & Dragons Fireball created a common language of area-of-effect fire spells, and we are happy to continue to speak it in Magic 2011. 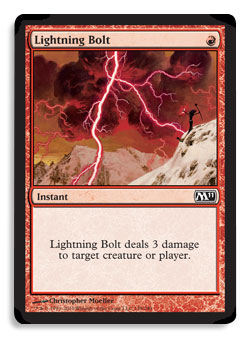 Lightning Bolt has a fantastic name, a simple and appealing effect, and is famously powerful. Its return was something that Magic 2010 lead designer Aaron Forsythe requested, and it was considered carefully. Some members of R&D initially thought that it would be too powerful; playtesting showed that their concerns were valid, but that Standard could handle it just fine. When Lightning Bolt's presence in Magic 2010 was revealed to the world, many players had similar concerns. Happily, our playtesting proved correct, and Standard is happily chugging away. Lightning Bolt is one of the format's defining cards, but the format is very popular and everything now appears to be balanced rather well.

Lightning Bolt is a strong card, and we understand that. Don't expect it to be around forever; part of what makes Magic fun to play is that it changes over time, and there's only so much red Standard decks can change when the best burn spell is so obvious. We are, however, keeping it around for one more year. 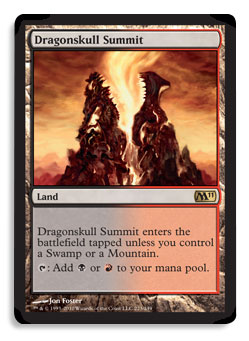 As a developer, one of the pieces of Magic 2010 that I am happiest about are its rare lands. The pain lands from Ninth Edition and Tenth Edition were tournament staples for a long time, but it was difficult to explain to new players why they should play with Yavimaya Coast in their green-blue deck when they may end up taking damage as a punishment for trying to cast their spells. The pain lands are also fiddly to play with, since using them for colored mana requires either adjusting a twenty sided die or writing down a new number on a sheet of paper.

Dragonskull Summit and its friends were created by Magic 2010 lead designer Aaron Forsythe, and they solve tons of problems that the painlands had. They don't require any life adjustment, often come into play untapped, and are powerful enough to be tournament cards. When Magic 2010 released, there was some unhappiness from players about these lands' inability to cast spells on turn one. Having played with them for nine months before the rest of the world, I was confident that they were good enough anyway, and I'm happy to see that everyone else agreed. We like how these lands work, and we're going to keep them around.

One of the most famous and iconic early Magic cards was Serra Angel. For years and years, that card was popular. There are several reasons why this was the case. It is an angel, which is a trope that most of us recognize. It had art that many Magic players found appealing. It has flying and vigilance, so attacking with it was fairly safe and didn't leave you without the ability to block. It was one of very few white cards in early Magic that was actually big enough to put a game away. All of this combined to make Serra Angel one of the iconic cards that players thought of when they thought of Magic.

Serra Angel served as the face of Magic until Fifth Edition, from which it is mysteriously absent, ostensibly for being too powerful. This was a curious move, and to my modern eye one of the odder things that early developers did. Serra Angel was far from a powerful tournament card at the time, and I can't recall it being played in any tournament decks at all. Removing a card that was so loved and didn't have onerous effects on the Standard environment strikes me as a rather foolish move. 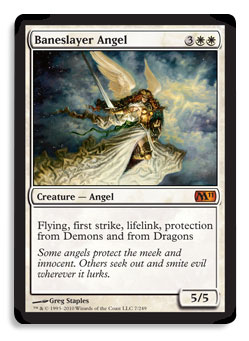 One of the design decisions that Aaron Forsythe made while he was designing Magic 2010 was to include Serra Angel as an uncommon, which is the rarity at which it was first printed. No doubt, he was thinking about Serra Angel's status as one of the marquee cards of early Magic. This inspired Magic 2010 lead developer Erik Lauer to wonder if he could capture the same lightning that made Serra Angel great with another angel, one that would be legitimately powerful in tournaments and serve as a new face of Magic for a new era. The result of that was Baneslayer Angel.

Baneslayer Angel has done an admirable job of picking up the torch that Serra Angel carried for so long. It is an angel, it has appealing art, and it's powerful enough to play in tournaments with a straight face. We are happy to have it be one of the faces that represents Magic to the world, and it will do that job for another year.

Although there are plenty of cards from Magic 2010 making a return, there are also a number of Magic 2010 cards that will not be coming back in Magic 2011. I'll chat briefly about a few of them. 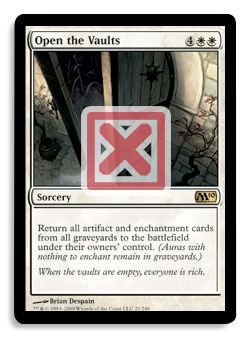 One of the special things about Magic's core sets is that they are not beholden to any particular setting or flavor. Instead, they are intended to represent a baseline from which Magic can vary in other sets. Under our new model, however, during their time in Standard they are inextricably connected with the block that comes immediately before it. For Magic 2010, that was the Shards of Alara block.

One of the five shards in Shards of Alara is Esper, which had an artifact theme. Although Open the Vaults is not creatively connected to Esper, we made the card with the intention that it would interact powerfully with Esper's artifacts. In that we succeeded, as Open the Vaults was powerful in Standard with Time Sieve, and Niels Viaene made the Top 8 of Pro Tour–San Diego with a Time Sieve-less version of Open the Vaults. However, those potential interactions will be gone when Shards of Alara rotates out of Standard. That would have made Open the Vaults a much less interesting card to have around, so it won't be coming back. 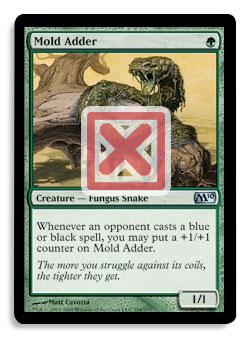 The story of Open the Vaults is overall a happy one. It came out, did the job we intended it to do, and will be exiting stage left at the same time as all of the other cards it needed to shine. Mold Adder is the opposite case. Flashfreeze, Deathmark, and Celestial Purge are cards that have been largely adopted by the Magic-playing public as excellent sideboard cards, and every once in a while they show up in maindecks as well, when things get a little out of balance.

Karplusan Strider was the first card that was made to be a member of a color-hating uncommon cycle. No one played it, so Mold Adder was created to replace it in Magic 2010. However, no one played Mold Adder either. We think that cards like Celestial Purge, Deathmark, and Flashfreeze are good for Magic, so in Magic 2011 we once again tried to find a green card that could have similar effects on Constructed Magic. I will be slightly sad to see Mold Adder go, as I'm the one who named it, but I'd be much more excited to have a similar card that people were actually happy to play.

I got permission to tell you about a few other cards that aren't in Magic 2011. They are ... 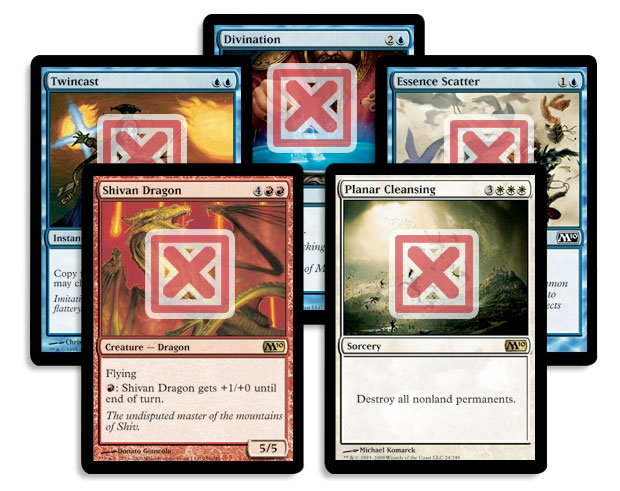 For these cards, though, I can't yet talk about why they won't be returning. I suppose for now you'll just have to guess. 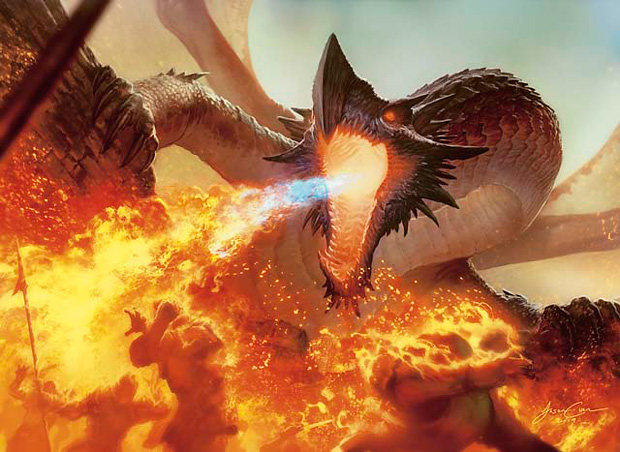 Archenemy will release on June 18, and its release parties will take place on the weekend of June 19 and 20. If you're hungry for more schemes to unleash on your hapless victims or a fearless hero who lives for nothing more than to fight overwhelming evil, make sure to get yourself to one of them.

Posted in Latest Developments on June 4, 2010