Creatures On Another Level

Posted in Latest Developments on April 2, 2010

This is not to say that we did not know that it was fast, because we did know that. Landfall and Allies are two of the set's defining mechanics in Limited. Under normal circumstances, landfall ensures that your creatures are stronger on your turn than on your opponent's turn. Allies get stronger when you play other Allies, which once again mostly happens on your turn. Because your creatures are better on your own turn, attacking is just going to be better than blocking, leading to an aggressive environment.

We understood that Zendikar was fast, so we built Worldwake to slow things down a little bit. Its landfall creatures don't get +2/+2, fewer of its Allies get +1/+1 counters, and more of its cards can actually block Steppe Lynxes and Plated Geopedes.

Our misperception, then, was one of degree. Strong players know that they need to curve out and attack early in the game in Zendikar Limited, so they value early plays, and especially two-mana creatures, very highly. Cards like Highland Berserker and Goblin Shortcutter routinely are taken above cards that are more powerful but more expensive. I'm pretty sure that very few of us third-picked Goblin Shortcutters before the set left the building, but the collective wisdom of thousands of Magic Online drafters and the best players on the Magic Pro Tour has shown that we were wrong.

I don't think this means we failed at all. There are tens of thousands of Magic players out there, and there are only twenty or so of us in Magic R&D. If we understand a format perfectly when we are done with development, it's too easy to figure out. We spend about as long working with each set as you do, but you all have the advantage of talking to each other while you try to figure out what to do with a set's cards. We do not have that luxury. Statistically speaking, we are some of the best Magic players in the world, but by necessity we work in a vacuum, so our understanding will only be so good. As long as our understanding was close to correct and the formats we create are fun to play, I think we're doing our jobs right. 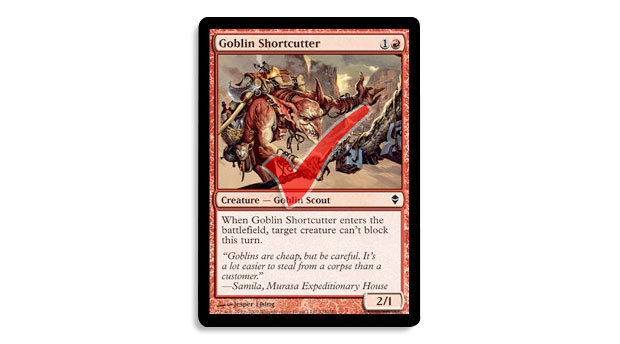 This is one of the more remarkable aspects of working on Magic. We play with a set for many months before any of you get to see it, but that doesn't mean that we have nothing more to learn when the sets release. We like playing Limited with real cards, and it's not uncommon to see drafts take place outside of work hours because we're nowhere near done having fun with the sets when we have to stop working on them. As we do this, we keep learning. For example, I found a deck on my desk recently that I drafted soon after Worldwake's release, and it looks nothing like anything I drafted while Zendikar or Worldwake was in development. I can say this with confidence because it has nine two-drops in it. 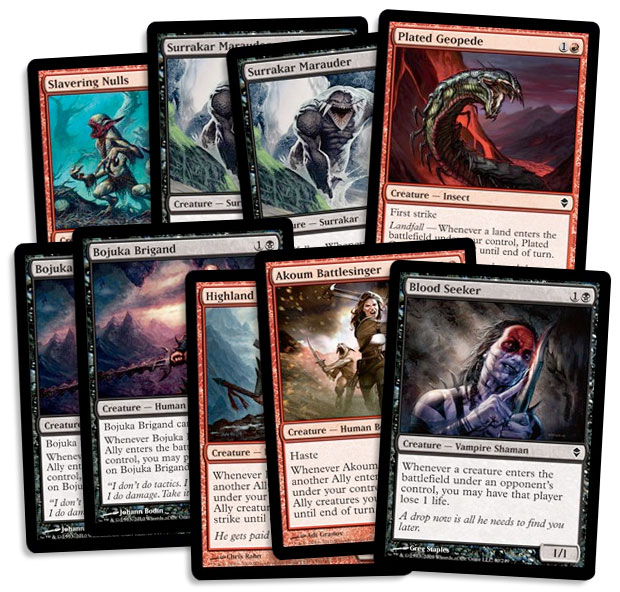 The Akoum Battlesinger is a little questionable, but I had eight other Allies in the deck and was just slightly short on cards. I wasn't that sad about it, though. I knew that it would be pretty strange if my games lasted past turn six or seven, so the liability of a drawing a random 1/1 creature late in the game was pretty low compared to how likely the Battlesinger was to help an aggressive Ally draw outrace an opponent or punch through defenses.

But enough about Zendikar and Worldwake. It's time for...

Rise of the Eldrazi is a very different world from Zendikar. It's the same plane, but some truly enormous monsters are ravaging the world. Those monsters look something like this: 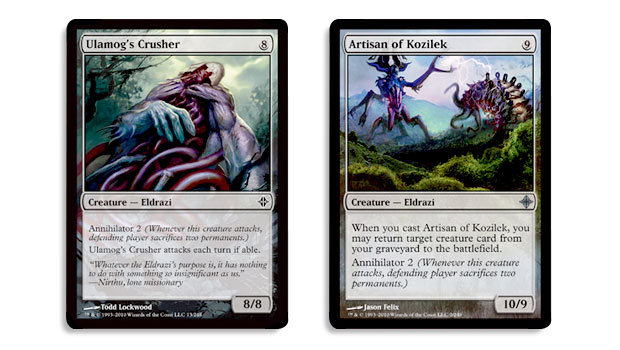 I'm sure you've thought about this already, but I will call your attention once more to the rarity symbols on these cards. Ulamog's Crusher is a common. It costs eight mana. It is an 8/8. And it is a common. Artisan of Kozilek is an uncommon. These are not the only common and uncommon colorless Eldrazi. You should expect to see these guys across the table when you go to the Rise of the Eldrazi Prerelease.

Rise of the Eldrazi Limited games are luxurious affairs, more like three-hour seven-course meals than the vicious feeding frenzies that are Zendikar Limited games. You can expect them to take a while. You'll have plenty of lands for lots of turns in a row. You'll sit behind walls like Overgrown Battlement and Vent Sentinel while you build up all that mana. And then, hopefully, you'll start crashing through your opponent's defenses with some enormous colorless creatures. Don't be surprised if this takes ten turns, or even fifteen. It won't take long for the game to be over once the Eldrazi get going, but you'll have time to do plenty of things before that happens. 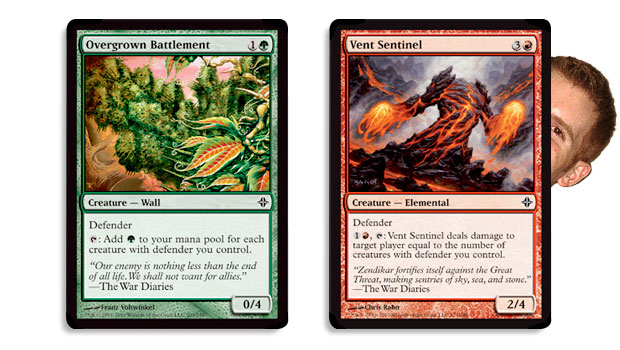 This has serious consequences for creatures that aren't enormous or colorless and don't have annihilator. Remember Highland Berserker from Zendikar? It was a great turn-two play in that format. If you didn't attack early and often, your opponent would and you would die. Even better for the Highland Berserkers of the world, games usually took around six to eight turns, so there wasn't a lot of opportunity for you to draw a random Highland Berserker late in the game when it wasn't relevant. 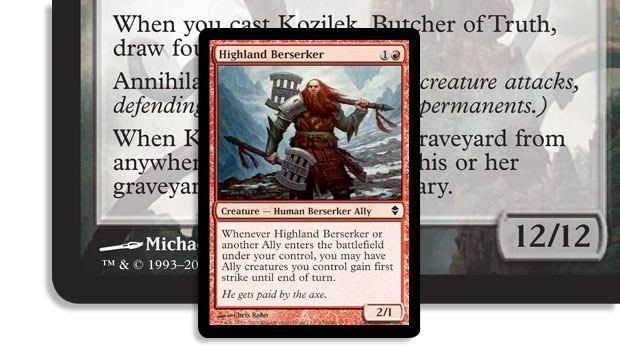 Rise of the Eldrazi Limited is a different world, and not a friendly one for Highland Berserker. Games don't last ten to fifteen turns by accident. They do that when there is a mess of creatures on the ground, creatures that make attacking with small creatures unprofitable or downright impossible. By turn eight or nine, the stars of the show are the big creatures. They might be naturally huge like the Eldrazi or have grown to huge sizes with totem armor Auras, but they will make a random 2/1 Highland Berserker with little hope of advancement close to irrelevant. The cheap creatures that stand up in this world are the ones that have important effects even late into the game. Trying to win the game by turn six is a noble goal, but it's unlikely to work in Rise of the Eldrazi Limited.

I just said something about creatures that matter late into the game. You might be wondering to yourself what such a creature might look like. Let me show you one that's already in the Visual Spoiler in the Rise of the Eldrazi product section. 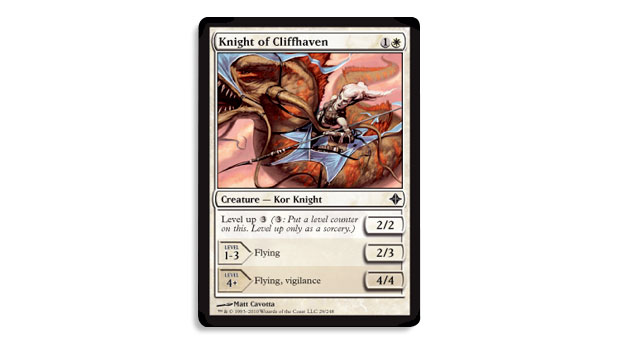 In Rise of the Eldrazi, those creatures have level up. And, as you have seen in the Visual Spoiler, there are plenty of them. But let's investigate this card on its own for a moment. 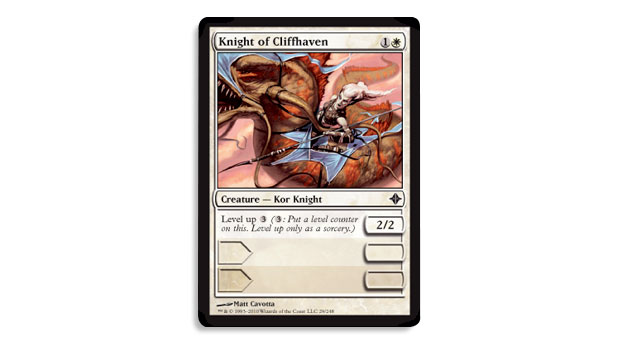 On turn two, Knight of Cliffhaven is a 2/2. These are stats that you expect to see on the cheap beatdown creatures in any Limited format. If that's all it had to offer, it might not be such a strong card, as it would get stuck behind Overgrown Battlements. But that's not all we have here. 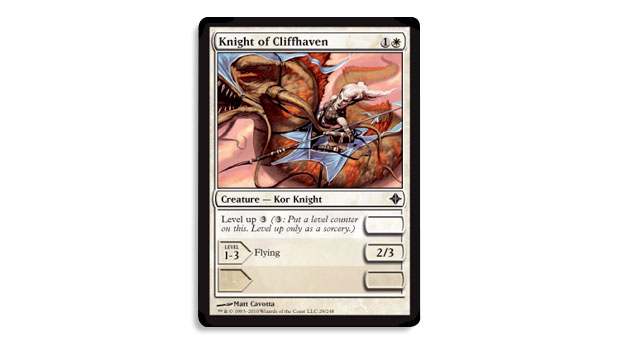 As soon as walls or bigger ground creatures make it impossible to attack with your Knight of Cliffhaven, you can take it to the air, where the defensive ground creatures have nothing better to do than watch as it flies over and hits their controller for two a turn. As the game goes on, though, you might run out of cards to play from your hand. When that happens, you can put some of that extra mana into the Knight, and you end up with ... 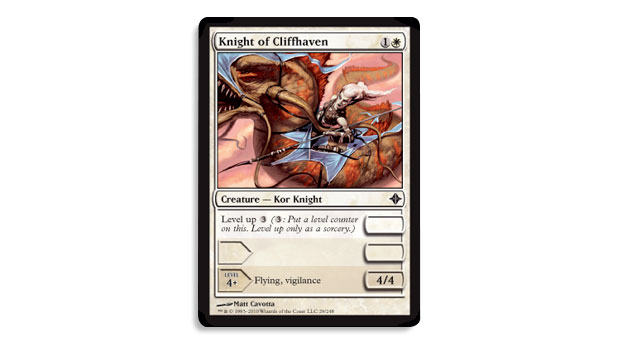 ... a Serra Angel, which trumps most flying creatures. The key here is to not think of Knight of Cliffhaven as a fourteen-mana Serra Angel. Think of it as a creature that is exactly the creature you want exactly when you want it. It's a two drop on turn two, then it's a flying creature as soon as that isn't good enough, and then when the game stalls out and you don't have much else to do, it's a big flying creature.

I suppose I should show you a preview card to further illustrate this concept. Let's do that now. 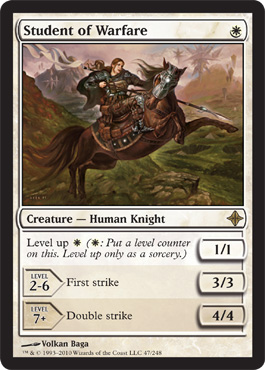 Remember Figure of Destiny? That card was the inspiration for the level-up mechanic, but how could we print level-up without making a call-back to it? Student of Warfare is that card. We got to know it quite well during Future Future League playtesting, where it became good friends with both Elite Vanguard and Ranger of Eos. It's also a very strong Limited card, as anyone who opens it and plays white at the Prerelease will be able to attest. 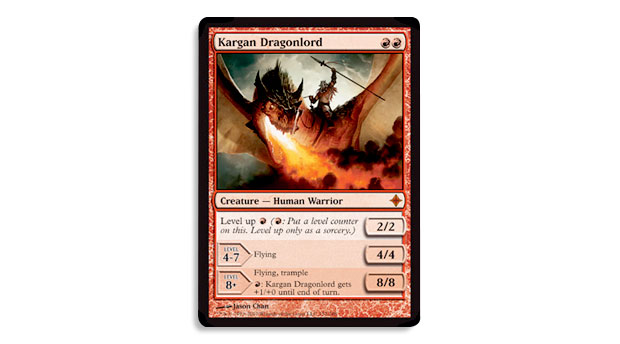 Not coincidentally, levelers are what you want in Constructed for exactly the same reason you want them in Limited: they are exactly the card you need every time you draw them. Aggressive decks need cheap creatures to start the game off right with. Playing too many cheap creatures, though, hampers their ability to function in the late game, when one- or two-mana 2/2 creatures just can't compare to things like Baneslayer Angels and Broodmate Dragons. Student of Warfare and Kargan Dragonlord, however, do not have this problem. They are fine plays on turn one and two, and just as fine to play on turn six.

Although you've never met her before, Student of Warfare is a veteran of countless playtest matches. She's seen every kind of game of Magic, from slow Rise of the Eldrazi Sealed Deck games to blazingly fast Future Future League Constructed games. Whatever kind of game you happen to find yourself in, she'll be ready to help you win it. 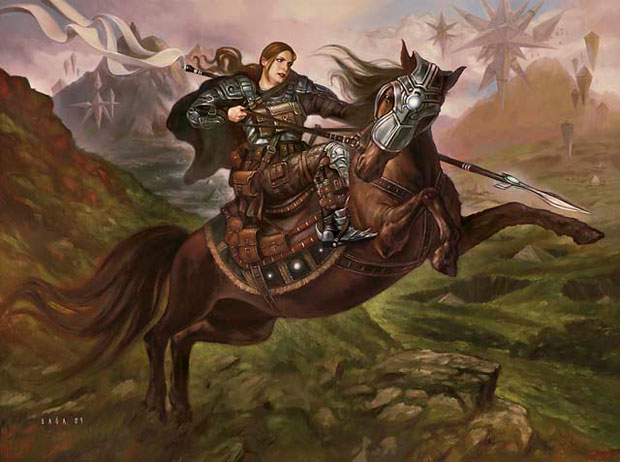 I won't be writing an article for next week, but I'm leaving you in the capable hands of Pro Tour Hall of Fame member and Magic developer Mike Turian, who has his own spicy preview card. I'll see you again in two weeks, and keep enjoying the Rise of the Eldrazi previews while I'm gone!

Awesome. The Rise of the Eldrazi Prerelease is only two weeks away, so you will get to meet him for yourself soon enough!

Posted in Latest Developments on April 2, 2010