Posted in Latest Developments on October 11, 2013

ro Tour Theros is right around the corner... and may actually be goingmay actually be going on while you are reading this. Of course, that means that the best pros in the game will be competing against each other for the chance to hoist the trophy, but doing so is going to require that they have pretty good Standard decks. I am looking forward to seeing what they come up with, and seeing which Theros cards make their debut at the Pro Tour.

One of the most important parts to designing and developing sets today is to create cross-block synergies so the sets within Standard play well with each other, but also so that there is enough of a change when Standard rotates to change things up. A diverse and shifting metagame is a healthy metagame. We are seeing that right now in Standard, where cards such as Sphinx's Revelation remain powerful tools, but at the same time cards like Elspeth, Sun's Champion; Fleecemane Lion; and Nylea, God of the Hunt are also showing up in force. This blending of the two sets (hopefully) creates a unique metagame that feels different from Return to Ravnica Block, Theros Block, or Theros-Huey Standard. This constant changing of the metagame is one of the things that keeps players coming back to Standard, and something we are interested in preserving. Getting it to work requires some architectural planning on our part, however.

Looking back to some previous years, it is easy to see places where this totally falls apart. Because we were working so hard on getting the decks we wanted to push be good in a block, we ended up with a bunch of "block monsters" that required basically nothing from outside of their own blocks to be Standard-competitive decks. And once you introduced the cards around it, you ended up with the best deck in Standard by a wide margin. The most obvious case of this is Affinity, which played almost nothing from either Onslaught or Champions of Kamigawa block around it, yet was the strongest deck in Standard between when Arcbound Ravager was printed until nearly the entire deck was banned. While there is no question the block managed to work in-block, there was also nothing that was able to rotate to fix the problem. Also, because of the timeline we work on, the earliest we could put a really powerful hate card into the format was Saviors of Kamigawa, far too late to have a real impact.

Another, much more reasonable example is Faeries, which also managed to be one of—if not the—strongest deck for its entire life in Standard after the printing of Bitterblossom. In some amount of contrast to Affinity, however, it did pull cards from the surrounding sets, although the core of the deck was the same that existed in Block—Bitterblossom, Spellstutter Sprite, Mistbind Clique, Vendilion Clique, Mutavault, and Cryptic Command. You might be playing Damnations and Ancestral Visions, or Agony Warps as support spells, but nothing in the core of the deck rotated. Again, in order to properly fix the metagame, we had to put incredibly powerful hate cards like Volcanic Fallout and Great Sable Stag in late in the Alara year, which succeeded in needing a Bitterblossom ban, but didn't improve Standard in the in-between time.

The goal of cross-block synergy is not just to prevent these block monsters from occurring, but also to keep space in the metagame open for cards from a new set. For Theros, that meant scaling back the enchantment-removal a bit during the Return to Ravnica year, so if people wanted to build an enchantment-heavy deck they weren't immediately punished.

In retrospect, one of the most dangerous cards we printed in the Zendikar year for the long-term health of standard wasn't actually something like the fetch lands, Lotus Cobra, or Goblin Guide—it was Tuktuk Scrapper. While that may seem silly now, when we put the card into Worldwake, we didn't know exactly how Scars of Mirrodin would unfold, and if it was even close to as artifact-dense as the original Mirrodin, then that single card could've had a big hand at pushing out the entire year.

Of course, that card ended up not being a whole lot next to Stoneforge Mystic and Jace, the Mind Sculptor, but one of the easiest ways to ensure that the metagame stagnates is to give a deck from the previous year too many tools to deal with what is coming the next year. In this case, if the Allies deck is very strong, then running artifacts is going to be a pretty big detriment. And even if it's not, this card alone in multiples could simply destroy an artifact-heavy opponent. Obviously, the direction the Scars of Mirrodin year took was more than different enough to keep that from being an issue, but that is the kind of mistake we actively try to avoid today. We're always going to be wrong on the individual power levels of specific cards, but we can make sure that the structure of what we are doing is correct.

By the time we are creating the seed cards for the next year, we rarely have a good grasp on what those decks could look like—the set is still in early design, after all. Instead, we work on seeding the themes for the next year. This gives us a solid foothold when we begin developing the set for Constructed, and hopefully gives us enough room that we can build fun and interesting cards and archetypes that don't require everything from the current year. These can be pretty blatant, like Steel Overseer in Magic 2011 or Farseek in Magic 2013. It can also be a lot more subtle, like Grim Lavamancer or Visions of Beyond in Magic 2012. Some of these will hit, some will miss, and sometimes the direction of the set doesn't quite line up with the seed cards, but that's okay. Their placement is what is most important. Having something that can rotate us lets us take some risks with the power level of a set and still be fairly sure that we won't have to power up the next set to make it relevant in Standard. 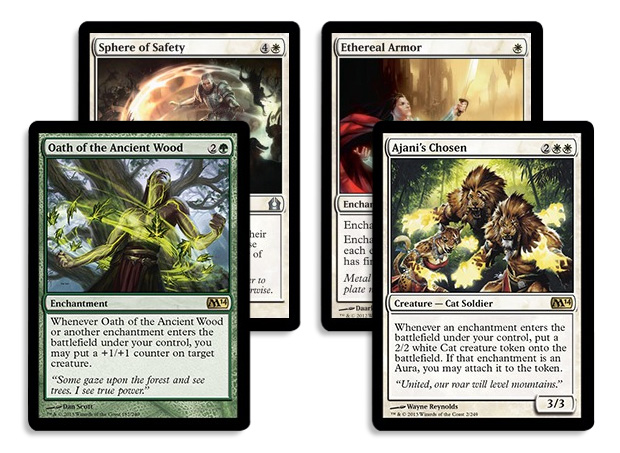 
Many people over the previous year successfully guessed that Theros would have a strong enchantment theme because we had seeded a few enchantment cards the year before. While the original Ravnica did also have a minor enhancement theme, we wanted to keep it to a minimum this time as to not do Theros before Theros.

While the direction of enchantments in Theros is much more related to bestow and the Gods, I think there is still a place for some of these cards. Plus, there are still two sets in the Theros block, which leaves plenty of room for these cards to show up. 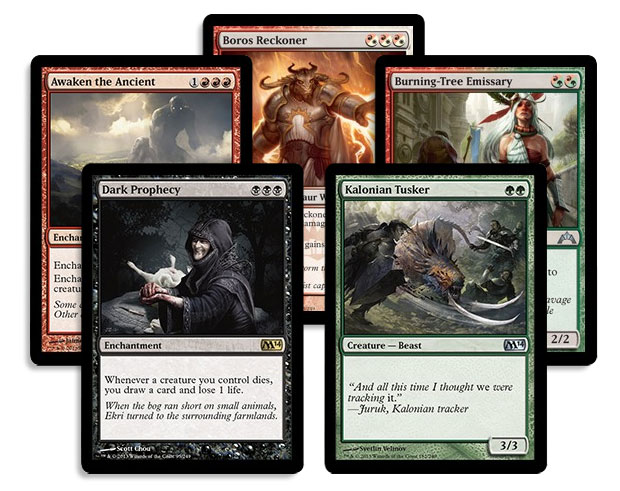 
Devotion was the seed that was hiding in plain sight, and one that I think would've been basically impossible for people to pick up on. While it may seem odd that we went from a multicolor block right into one that has some rewards for having a lot of permanents with many mana symbols, it let us do it in one of the most creative ways possible—with hybrids.

The nice thing about a card like Boros Reckoner is that it gets to pull triple duty, allowing you to run either Purphoros or Heliod in mono-white, mono-red, or red-white strategies. Not only that, but it nearly activates the Gods by itself. While you shouldn't expect to see a lack of color mana symbols this year or next, the number of triple-symbols is usually very low. Hybrid wasn't put into Return to Ravnica block to support Theros, but it's inclusion let us push devotion to a level that I believe is very fun in Standard, but one that shouldn't be too damaging for next year if it is too strong. 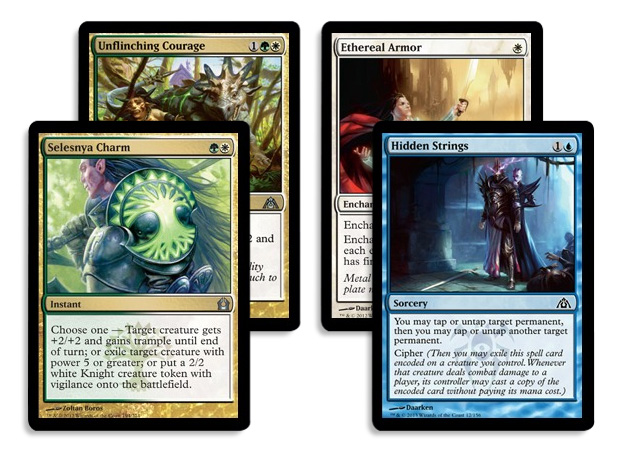 
Heroic is probably one of the more fringe strategies for Standard, but it is one that could easily show up. While piling up lots of enchantments or pump spells on a single creature is historically a recipe for disaster, we have put some cards like Gods Willing into Theros to make sure the heroic deck has some play. And let's face it, casting an Unflinching Courage on a Fabled Hero tends to swing games pretty quickly. Add a Giant Growth on turn four, and that is just about lethal.

To that point, we did leave some stuff out of Return to Ravnica block when seeding for Theros. Several people sent me irritated messages that Mortify wasn't in Gatecrash or Dragon's Maze, and this is why—because we didn't know exactly how Theros would play out, we wanted to make sure to not risk too much. A card like Wear & Tear works because it isn't easy to main deck it, while Mortify is rarely going to be dead and poses very little risk as a main-deck card. Also, much like how Shatter, Oxidize, and Viridian Shaman saw a lot of play during Mirrodin Standard, we wanted to leave the door open for a more interesting suite of enchantment removal spells like Destructive Revelry to see play. The best way to do that was to leave those cards for Theros block.

So, how good a job did we do? That remains to be seen, but I have faith that Theros will make a huge impact on Standard. We are coming out of one of the most diverse Standard metagames we have ever produced with the Innistrad-Return to Ravnica year, and I look forward to another year of varied decks and interesting metagame changes to come.

Posted in Latest Developments on October 11, 2013