The Day the Cards Tapped Backwards

Posted in Latest Developments on April 11, 2008

But the Shadowmoor design team wanted to take the feeling of a Dark Mirror Image one step further, searching for a mechanic that would stand as the Dark Mirror Image not just to Lorwyn, but to Magic as a whole. It was Mark Gottlieb (Magic Rules Manager, genius supervillain, and Shadowmoor co-designer) who came up with the answer.

is the untap symbol.)"

Never has a phrase so simple been so mind-blowing a reversal. The four word reminder text expresses the concept so simply. But the implications for gameplay and deckbuilding are enormous.

* The untap symbol is the analog of the tap symbol. Represented as {Q} in rules documents, it looks like a white J-shaped arrow (with the arrowhead pointing up) on a black circle.

* The untap symbol appears only in the costs of activated abilities. It means "Untap this permanent."

* If the permanent is already untapped, you can't play its {Q} ability. That's because you can't pay the "Untap this permanent" cost.

* The "summoning sickness" rule applies to {Q}. If a creature with an {Q} ability hasn't been under your control since your most recent turn began, you can't play that ability. Ignore this rule if the creature also has haste.

* When you play an {Q} ability, you untap the creature with that ability as a cost. The untap can't be responded to. (The actual ability can be responded to, of course.)

And here are a couple more notes on Knacksaw Clique in particular:

* The removed card is played using the normal timing rules for its card type, as well as any other applicable restrictions such as "Play [this card] only during combat." For example, you can't play the card during an opponent's turn unless it's an instant or has flash. Similarly, if the removed card is a land, you can't play it if you've already played a land that turn. If it's a nonland card, you'll have to pay its mana cost. The only thing that's different is you're playing it from the removed-from-the-game zone.

* If you don't play the removed card that turn, it remains removed from the game but you can't play it.

is indeed the mysterious, much speculated upon "Q" symbol that Shadowmoor Lead Designer Mark Rosewater alluded to in his column nine months ago, back in July 2007. It seems like forever ago that that little hint was published, and even longer since

was designed, and now it's finally ready for the spotlight.

Knacksaw Clique, Sawing Their Knacks Away 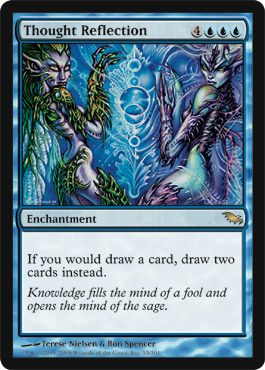 So what can you do with a creature with

? First consider what it does straight-up, without any combos. Take Knacksaw Clique. If its ability were a classic

ability, you would want to use it in your main phase, to make sure that if you flip over your opponent's Thought Reflection or Grim Poppet, you can play it for yourself. So you would face a tough choice of what to do every turn. You could tap Knacksaw Clique to use its

ability or block. Or you could leave the Clique up to block with its 4 toughness, but then you couldn't use its

ability or attack. So in short, you could only pick one: attack, use the

But Knacksaw Clique doesn't have a

ability. It has a

ability. That means you can attack and use its

ability and block every turn. Instead of choosing just one of the options each turn, you get to choose all three. And all the creatures with

abilities can perform that triple duty. In a way, every

creature also gets Vigilance for free, while still being able to use its

ability during your own turn.

In order to use your creature's

ability, you need to find a way to tap your creature first. Fortunately, almost every creature in Magic has a way to tap it built right in: attacking. Several

creatures fly, or have a very high toughness, to ensure that they survive making an attack while they get their

ability ready. Knacksaw Clique actually has both. Since Knacksaw Clique has both flying and a 4 toughness, it is almost always able to attack without danger, getting ready to use its

ability then block again during your opponent's turns.

In a normal block, if you were playing blue-red and your opponent were playing monowhite, you wouldn't have much chance of playing your opponent's spells the first time you activated Knacksaw Clique. But since Shadowmoor is a hybrid block, your Knacksaw Clique could easily flip over your monowhite opponent's Augury Adept, and you could just play that white-blue hybrid card for blue mana. Or your Knacksaw Clique could reveal a monoblack opponent's black-red hybrid Fulminator Mage or Demigod of Revenge. Just play them for red mana.

In addition, Knacksaw Clique has another way to cast the spells of opponents who don't match your colors. Just use Knacksaw Clique to steal some of their lands first, then use their lands to cast their own spells against them. Or use five-color mana producers like Prismatic Lens or Vivid Creek to give you all the colors of mana you could need.

When a Cost Is not a Cost

is always used as a cost. But giving you something beneficial (untapping your creature) sure is a weird thing to have as a "cost." It's sort of like saying:

"This soda costs negative one dollar. Every time you buy one, you have to receive a dollar."

It doesn't take long to see how you could turn such a "cost" to your advantage. And

is much the same.

Seeded by nefarious designers, Shadowmoor has more than a few ways to tap your creatures, allowing you to pay the alleged "cost" of untapping creatures with

a ton of times in a row. And there are more than a few in surrounding sets as well.

Shadowmoor includes many ways to tap your creatures as an additional cost, setting up

even more. So one cost (tapping) pays for part of your other cost (untapping)...which pays for your first cost(tapping)... it's easy to see how this can start to heat up. There's even an entire Shadowmoor mechanic that taps your creatures as an additional cost. 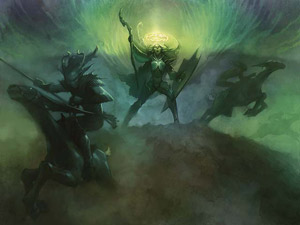 There are also several "tap target creature" effects you can use either to subdue your opponents' creatures, or use to set up multiple activations of your own

creatures. There are ways to graft

abilities onto any creature you want. And there are several extremely subtle

enablers that many players won't even notice, but smart players will discover.

If you can find a way to give a

ability to a creature with a

"That's a good reason to avoid putting any effects that grant

But the off-kilter Shadowmoor designers instead said:

"That's a good reason to put lots of effects that grant

creature with Arcane Teachings from being an instant two-card kill, all the

abilities have at least 1 mana in their cost, so you will have to work a little harder than that.

Right about now, some people are probably remembering that Lorwyn/Morningtide Merfolk had a large theme of tapping other Merfolk to produce effects, including Drowner of Secrets, Summon the School, Benthicore, and even the humble Mothdust Changeling. That's a pretty good guideline on which to avoid putting the

mechanic on Merfolk, to provide safety from sick, unbounded combos.

Of course, it is a pretty good guideline that the Shadowmoor designers gleefully ignored, designing four different merfolk with

definitely takes a little getting used to. You find your brain has trained itself to ignore most tapped creatures during your turn and concentrate on the ones that could block you or use a

ability. And the first few times you run into a

trap, it will jump out and totally surprise you.

Even if you go into next weekend's prerelease with both eyes open, I'm just letting you know that your opponents will often forget to notice a cunning tapped creature preparing its

ambush. And you'll probably forget it a few times yourself. Just make sure you spring the trap at least as often as you fall into it!

I've heard Magic R&D members say that we can't make Johnny mechanics for Limited, because you can't ensure that Limited players consistently get access to both parts of the combo. But

shows that you can. It's one of the Johnniest mechanics we've ever done.

Two-color decks are the clear winner, which makes a lot of sense since the vast majority of Magic decks in non-gold environments are monocolored or two colors. A large contingent also held fast to their right to diversity, saying "I like to play different kinds of decks." I wonder if Shadowmoor will affect these results, but it's very hard to say how. After all, Shadowmoor rewards monocolored decks (with cards like Beseech the Queen and Jaws of Stone), two-colored decks (with cards like Wilt-Leaf Liege, Dire Undercurrents, and others), and three-or-more-colored-decks, with the nature of hybrid cards with just a single colored mana (like Rosheen Meanderer or Scarscale Ritual) leading people potentially to be able to play three-colored decks more easily.

Posted in Latest Developments on April 11, 2008