Days of Future Future: Born of the Gods

t's Fated Week, and I want to talk a bit about how we manipulate Fate—by battling Standard decks in the Future Future League. The Future Future League is our internal league where we test cards for future Block and Standard. Our goal isn't to break the metagame—if our handful of developers were able to solve the metagame in the time the set was in the FFL, then the people in the real world would do it in a matter of weeks—instead, we want to provide a large number of strategies that are about even in power, and allow for room in the metagame to shift as certain decks gain or lose popularity. This means our main job is to try out as many cards and combinations of cards as possible, and to give the overall strategies enough to make things interesting—not to pinpoint balance everything against each other. We do this by building decks, playing them against each other, finding out what (if anything) we want to change, and playing some more. 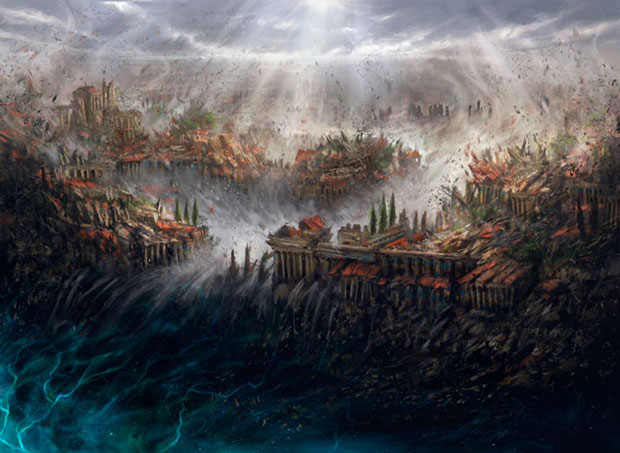 When Born of the Gods entered the FFL, Magic 2014 was locked in, but Theros still had time to make some changes. We do this so that, when working on Born of the Gods, we can figure out if there are any cards from the Theros set that should change—both to let Born of the Gods do new things, and so we won't have to dodge powerful interactions for the rest of the time Theros is in Standard.

We figure out a lot in the FFL. We don't solve the format, but we hopefully put it in the right place that it is fun, balanced, and deep enough that all of the millions of Magic players can't solve it before the next set comes out.

A lot of the decks we build are interesting but do not end up being strong enough for Standard. We need to try out things that aren't strong enough to know if we can make some tweaks to get those decks into Standard, if they are fun enough. We also need to test out the decks that look like they would be not fun, or risky, for Standard, and keep them from being the best deck in the format. Most of the decks in this article trend toward the first, but a few were risky enough that we put the kibosh on a few combos that would be hard to interact with if they actually did prove to be too strong. Because of the numerous changes to the set both while Born of the Gods was in development, and during the development of Journey into Nyx, many of the decklists in this article will include cards that do not match their final versions. So, if a card looks a little out of place, it may just be that the old version ended up being tweaked either for power or to get an ability that would be more relevant in another deck.

But, anyway, on to the show.

When starting with a new format, one of the first things we do is update what we believe are some of the top decks of the previous environment with cards from the new set. For example, below:

But we can't dwell too much on decks like that. We also had updated stock versions of Mono-Black, Red-Green, and the like. We also need to try out radically new things.

3 Mogis, God of Slaughter 1 Purphoros, God of the Forge 2 Whip of Erebos

Another deck we used to test an earlier version of the God (who at that point had a damage trigger off of your own creatures dying) is above. As a side effect, this deck also convinced us that Underworld Cerberus needed a slightly different "return" clause that didn't put creatures back in play.

After the Gods, the next most important thing to get right with Born of the Gods was Kiora. The goal for her was that she would be interesting in ramp/control decks, but not so strong as to make it bad to play creature decks. We played decks like the one above to get a feel for just how good she would be in Standard. This led to the card seeing a lot of changes. Heck, I even wrote a whole article about it, which you can check out, here.

This is a deck archetype we are very careful about in the FFL. It's okay if there is a Turbo-Fog deck somewhere in Standard that will show up at lower tiers of Constructed, which can win tournaments due to the metagame, but we don't want it to be one of the independently strongest decks in Standard. An environment full of Turbo-Fog mirrors would make tournament Magic much less fun for everyone, as round after round goes to time. Luckily, this version fit into the "Strong against dedicated beatdown decks, but loses to control" area, so we didn't need to change anything to balance it.

Another element we were very mindful of was that the decks that loaded creatures up with Auras weren't too powerful. At the time we were working on Born of the Gods, there was both a Standard and Modern deck that was already winning using that strategy—not exactly ideal the year before a set with a lot of Auras. Because of that, we put a decent amount of time into playing these decks. It was okay if it was strong, but we wanted to make sure there were enough answers if the deck was too good. We didn't know how much longer the Auras deck in Standard would perform well, and we wouldn't want that to be what Standard was about for a year or more.

Mayor of WUBRG and his Campaign Manager by Billy Moreno

4 Hero of Iroas 2 Plea for Guidance

Not all of our decks were totally serious—some test what look like fringe strategies to see if they are fun. Former developer Billy Moreno was well known for thinking very outside of the box when creating decks. He was the first one of us to identify the Master of Waves deck, for example.

As cards change, we often try very extreme version of decks that we wouldn't exactly expect to see in the real world, just to figure out if we can push cards in interesting directions. In the above deck, we tried pushing Satyr Firedancer as being a more efficient creature in a dedicated burn deck. What we found was that burn is generally more fun when the options is to kill me or my creature, but when too many of the cards overlap and do both, that the games just aren't fun. As a result, we moved the Satyr to its current cost.

Speaking of Master of Waves, while the primary members of the Future Future League are Magic developers, we do occasionally have people from other parts of the company come and participate in our games. Josh Jelin was a business analyst for us, who has since left and gone back to school to get his master's degree. But, while he was here, he actually submitted the card that would become Master of Waves through a hole filling. Being very proud of the card, he checked in on it now and then to see how it was doing in Standard. I think that we can now agree that it is doing pretty well.

Everyone has cards they get attached to and make decks based around them. One of them for Gavin was Exava, Rakdos Blood Witch, which he naturally used with all of the +1/+1 counters granting that Born of the Gods gave us in the form of tribute.

Well, that's it for this brief overview of the Future Future League for Born of the Gods. I hope it gives you all some insight to some of the things we were thinking about while working on the set.