Posted in Latest Developments on September 13, 2013

bout once every six months in the Pit, there is a discussion about what makes something a game versus an activity. This conversation happens whether people want to have it or not—it's just some strange nature of working there, I guess. The gist of it comes down to this: games require meaningful decisions and activities don't. Chutes and Ladders, for instance, has no decisions that the player makes. It's just about rolling dice and seeing where that takes you—activity. Generally, if a game has been solved (such as Tic-tac-toe), it moves off of the list of games and into activities, since someone who studies it can just do the "correct" pattern and win every time. 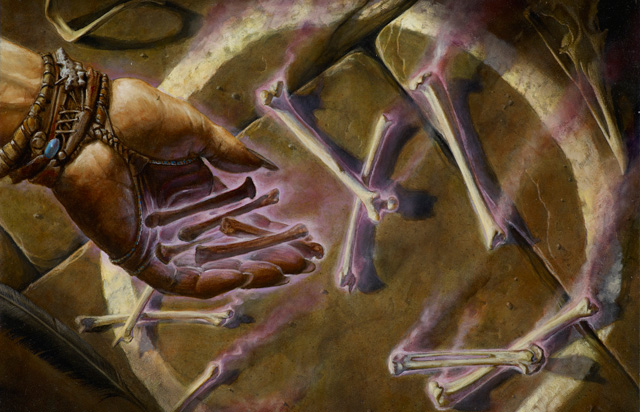 One of the things that makes Magic a game, beyond the tens of thousands of cards and septamulbiltillion combinations of those in a deck (I didn't make that number up, I swear), is the fact that there is enough incomplete information to keep things interesting. This, combined with the inherent randomness in the way the game is played, means that there won't ever really be a correct pattern, at least not discernible to someone without information that the players don't have access to. Instead, players are required to use what limited information they have available to them, and use that to make the best decisions possible. When your opponent is attacking two 2/2s into your 2/3, you have to decide why he or she is doing it. Does your opponent have a combat trick? Is he or she just trying to race you? Did your opponent draw a board-sweeper and trying to get some free damage in? Clearly something is up, as people don't just generally throw a creature away like this. Or is it a bluff? What is the best thing to play around?

I believe that decisions like these are what keeps us coming back time and time again. Because they keep giving us different games, with different results, and keep us learning new and interesting things. It's important that there be some hidden information and some randomness to keep everything from becoming solvable. It's one of the reasons that we have pushed tutor effects and strong card filtering effects to higher mana costs over the years—while it is good to have some amount of that around, the games begin to play out in a similar manner every time when the effects are too powerful. It's not a matter of guessing what you will draw and playing toward that, it is a matter of knowing exactly how the next few turns will play out. We want the incomplete information for not just your opponent's hand, but also the top of your library, to increase the number of meaningful decisions in the game.

When I say meaningful decisions, what I mean is making it so that, as much as possible, games hinge on strategic decisions that a player makes, not just on following a lot of complex procedures until one person makes an error. While the procedures of Magic are important, they shouldn't distract from the more interesting decisions that the game presents us with. Over time, we have done things like streamlined combat (a few times), cleaned up how we template cards, and rewritten the Penalty Guidelines to try and make this occur. To some people, this has removed some amount of skill from the game, which is true, although a lot of that skill wasn't very strategic in nature. We believe it is best to focus on the skill that comes from strategic decisions, and a big part of that is being able to make inferences based on incomplete information.

Magic is a game of decisions using incomplete information, as opposed to a game like Chess where all information is out in the open, and players are able to process each and every bit of it before making their moves. In Magic, the board state is open, but the hand and the library are both obscured, so players are forced to make inferences based on the information given to them. There will be plenty of games where you will correctly play around five different cards, only to lose when your opponent topdecks the one you decided to play into. That's just going to happen; you can make the correct play and lose or make the wrong play and win. Of course, you increase your chances by making the right one, but the lack of complete information keeps it from being a sure thing. The game also works the best when there is some give and take—cards like Burning Earth that don't simply demolish opponents for playing nonbasic lands, but make their lives difficult.

As an example, an earlier version of Voice of Resurgence had an ability that triggered when an opponent cast a spell on your turn, just like it does now. Except that this ability let you gain control of that spell, and you could choose new targets. It was quickly changed because the intent was to make casting spells on your turn a costly endeavor, not to brutally punish mistakes. In most cases (except, awkwardly, counterspells), this wording was virtually identical to "your opponent can't cast spells on your turn," but if your opponent did anyway, he or she generally lost the game. We want to keep the punishment for doing things like this at a manageable level, so that there is at least some decision on the opponent's part against a card like this. For sure, I don't want to give my opponent a */* Elemental token, but sometimes it is worth it. It's good that there will be times when a player will win after making the conscious decision to give his or her opponent an Elemental for the sake of an instant in his or her hand. The fact that it isn't always wrong is what makes these kinds of cards interesting. If there were no times when giving your opponent the Elemental was correct to do, we would've found something different for the card to do. As it is, I think there is just enough to keep it interesting.

My preview card today is another example of the work we are trying to do to increase the interaction in the game, and allow for players to make interesting decisions that can impact game play. Presenting the new variant of Fact or Fiction, Steam Augury. 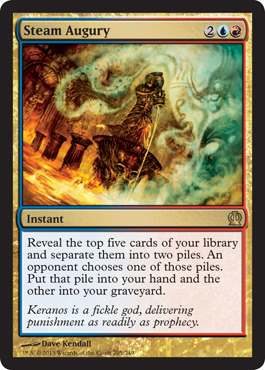 In game-play terms, I find this card to be a strict upgrade to Fact or Fiction. It is probably a bit less powerful as a whole, but I find the way it plays to be much more enjoyable, and it allows for a number of fun "Jedi mind tricks" that Fact or Fiction never did. And really, to Fact or Fiction was more than powerful enough by itself; it could stand to get a little worse and still see play in Standard, or even Modern.

One of the problems with to Fact or Fiction is that it reads like there is an interesting game to be had in resolving the spell, but that is rarely the case. The bluffing game that looks like should exist doesn't, because the player casting it has all of the hidden information, and he or she forcing the opponent to make the most important decision first, based on little to no information. There really isn't a great opportunity to actually outplay your opponent when casting to Fact or Fiction, just the ability to capitalize on your opponent's mistake.

With Steam Augury, the player casting the spell generally has the hardest decision, but with that comes the ability to generate interesting piles or take advantage of your opponent not knowing what is in your hand and thus to get him or her to give you what you want. Plan on casting a clutch Supreme Verdict on your next turn? Well, you know that, but when your Steam Augury at the end of your opponent's turn reveals another, you can use this to your advantage in splitting the piles in such a way that your opponent gives you an overall stronger pile without the Verdict. At which point, you can "Still Had All These" your opponent with the Verdict, and be further ahead in the game. 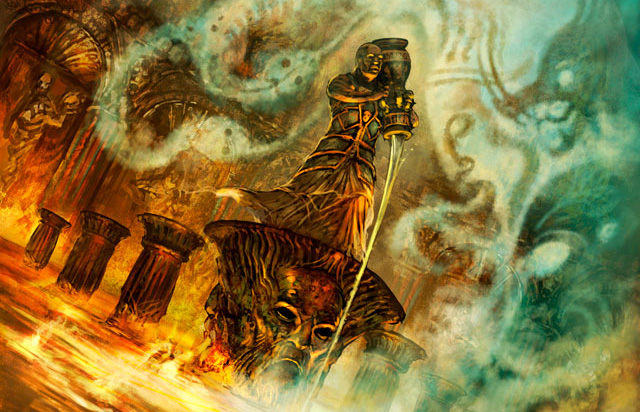 I believe it is these kinds of limited-information games that make Magic more fun as a whole. Being able to interact with your opponent is just more fun when you know something he or she doesn't. It's also more fun when some of the interaction hinges on trying to decipher what is in your opponent's hand, and not only what's in play.

Posted in Latest Developments on September 13, 2013