talked a few weeks ago about using Commander (2013 Edition) to develop cards for eternal formats, but that isn't the only product we develop the cards in Commander for. We also develop them for Commander. While most of the design team members are players you might more closely associate with the format, development also tries to keep up on it and, of course, apply the principles we use on other products to the format. 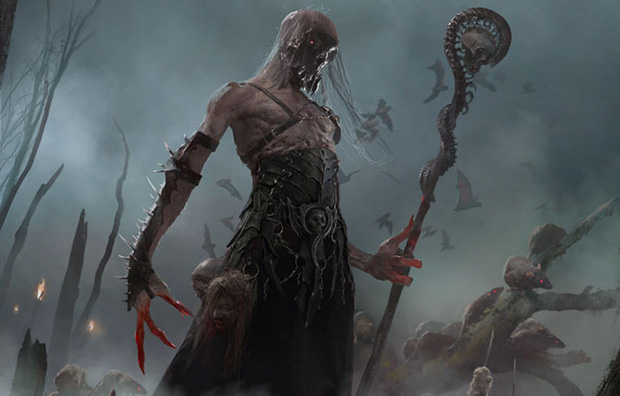 Products like Commander are one of the few venues we have to produce new cards for formats other than Standard. While putting in rolls at eternal cards is important, it also lets us make use of huge swaths of Magic's design space that generally goes unused due to the one-on-one nature of most competitive Magic games. We are also able to better find the right spot for some cards with really huge effects when we don't have to worry about how they will impact Limited. In many ways, this is the set where we get to let our hair down and try some new stuff.

During some of the early development playtests, we attempted more commanders who used the "in the command zone" shtick to see what space was available, and how much room there was. The end result was that we cut it down quite a bit, but I would be surprised if we didn't use it again in a future Commander product. As I mentioned earlier, one of the goals of a product like this is to try and mine some space for cards that we wouldn't put in regular expansions, and since (outside of emblems) those cards basically never interact with the command zone, it was only natural that it was a great first place to start.

Trying new things is very important to development, but so is knowing when what you have is just too far. The design file took some strong shots at finding some of the unused space for what commanders could do to interact with the command zone and ran with it. It included the cards you see now, where they grow with how much mana you've spent, cards with triggered abilities from the command zone (of which only Oloro remains), and even commanders who had a global enchantment effect that worked from either the command zone or the battlefield.

After a few playtests in, we had cut back on some of these designs, but used what we learned to improve our future efforts. What we found with these cards was that they were very frustrating to play against. Oloro, Ageless Ascetic gaining you 2 life a turn from the command zone isn't overpowering by any stretch of the imagination, but the inability for other players to deal with it left many playtesters with a sour taste in their mouth. This effect was heightened by a playtest where each player's commander was adding a different global effect to the board (like Exploration), and it pushed the game too far away from what we thought of as Commander into something else. The cumulative effect turned the games into something akin to Speed Chess as opposed to a regular Commander's Chess game. Not quite Chess Boxing, but different enough to warrant us pulling back. 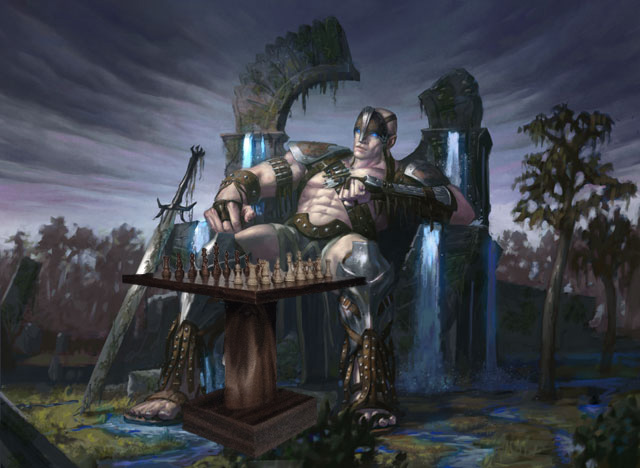 The idea seemed pretty reasonable—commanders with global effects can just be recast, so making the effects a bit weaker but permanent seemed interesting, but even small effects with absolutely no way to interact with them just aren't great for game play. Part of the issue is that what each player's idea of a "small effect" varies quite a bit and is incredibly specific to what other decks are being played. So (as an example) the constant effect of Exploration, although symmetric, rewarded players for playing a lot more lands than everyone else, and for having more card drawing in their decks. When someone fell behind, he or she did so in what can only be called dramatic fashion.

I think there is a lot of room left to find new and interesting effects that use the command zone in ways that we wouldn't use in regular Magic, but we are certainly looking out for the space in the future and making sure there is enough interaction to keep the games interesting.

Scaling effects are something we are keeping an eye out for more and more in regular booster releases, but feel better about making deliberate plays at in a Commander release. In the way-way back there was little rhyme or reason to when a card affected "target opponent," "target player," or "each opponent," and it tends to now be a conscious decision for both the set's lead developer, and the lead editor, to come to agreements on.

The major advantage to targeting just opponents is that it makes the clicks easier on Magic Online. While it may not seem like much, if you play a really old set during a throwback draft week, you will often be amazed at how many cards ask you if you want to do this really awesome beneficial effect to your opponent. Graft, as an example, lets you put the counter on any creature. While it opened up design space to allow for Cytoplast Manipulator, it also requires that you click "no" a half dozen times or more per game as your opponent plays guys. In my opinion, the added space for the mechanic just wasn't worth it for the hit in online play. On the other hand, the fact that Syphon Soul hit each of your opponents made the card an instant favorite in multiplayer from its first release. Figuring out which cards want to scale, and which don't, is just one of the many tasks that happen in the development/editing part of a set's life.

The two most simple ways that we can make a card more powerful in Commander is to either increase the cost, and the size of the effect, or keep the cost of the effect the same, but let it affect multiple opponents at the same time. As recently as Theros, Gray Merchant of Asphodel began its life targeting any player, but ended up expanding to everyone based on the feedback from Commander players around the building. While there certainly is a limit to how much we want these effects to do (don't expect a hit-everyone Mind Shatter anytime soon), it is one of the areas where we can really ramp up what happens with a card when it goes from a Standard or Limited duel into multiplayer.

For this set, look at a card like Shattergang Brothers. While this card would be strong in a normal one-on-one Magic duel, it really shines in a format like Commander where the "each opponent" clause turns the card from trading one-for-one into one-for-two, -three, -four, or higher. This is also where cards like Baleful Force come from, gaining a benefit on each upkeep. While this advantage is small in a two-player game, the more people in the game the more interesting it gets.

Of course, what could would Commander be without some politics? Of all of the aspects of multiplayer, this is by far my favorite. I find watching people play multiplayer Magic often more interesting than watching them play a regular duel, and it is definitely better for a casual observer. Since so much of the game is politics, that can be followed without having to worry about what the individual cards do. Discussions between players about who gets attacked, as well as the making and breaking of promises, and the clear dynamics of everyone ganging up on the one player who tried to make a play for the win, is just entertaining to watch. I wouldn't go as far as to say you don't need to know what the cards do, but you don't need to know the intricacies nearly as well. 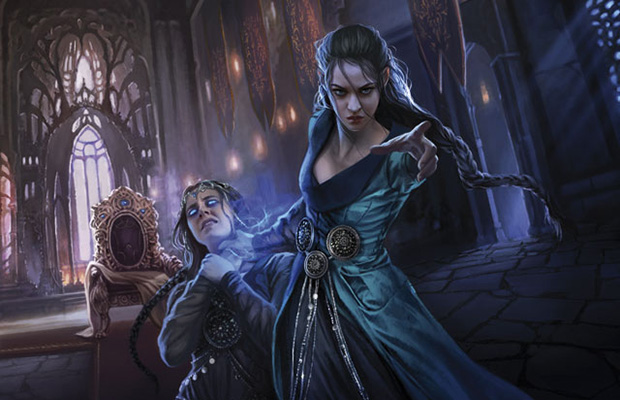 In the first Commander set, we produced cards like the Vow cycle that added the concept of creature enchantments that buffed up a creature, but made it so it couldn't attack you, as well as Ruhan of the Fomori, who is incredibly overstatted at a four mana 7/7, but whose random attack makes you a threat to everyone. These are, again, cards we wouldn't put into regular booster release, but they play to the strengths of the format and are another place we can find new and interesting designs that Magic hasn't tried in the past.

Tempting offer is a simple ability in a one-on-one game of Magic. It's easy to solve—you almost never take the offer. We don't generally like doing cards that are so solvable from any given board state, but that all changes when you add additional people to the mix. Multiplayer is where the cards really shine—since not taking the offer not only puts you behind the players who did, getting the larger effect should put a big target on the head of the person who cast the original spell. It can be hard for a Spike like me to cast a spell like this, since I don't know how it will turn out, but that is also the fun in it. 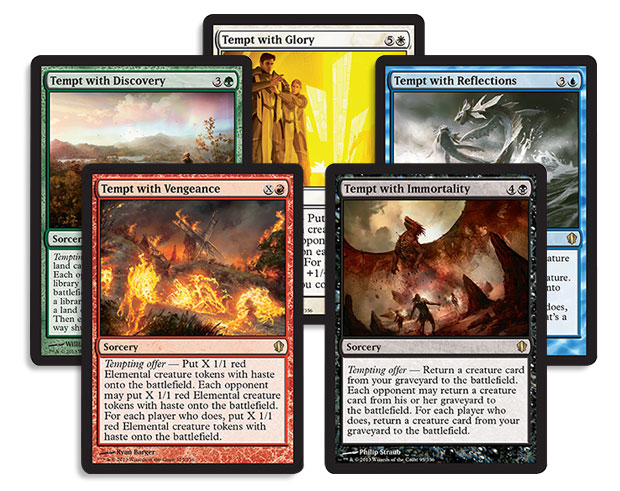 Besides just abilities, Commander lets us print cards that produce wild effects that wouldn't make sense in a traditional release, like Illusionist's Gambit. I believe there could be a way to make a card similar to this work in a regular release, but the fact that it wouldn't work up to its full potential in most of its games is not ideal. Saving these kinds of designs for Commander keeps the pressure off of us to have it work equally well in one-on-one and multiplayer, and lets us maximize just how cool the Commander version is.

We know for sure there is a demand for these kinds of Commander-centric cards now, something that was less clear when we produced the first Commander set in 2011. That's good, because it helps us to separate where these cards should live—whether in a Commander-type release or a regular booster release. Of course, we will still produce cards that are fun and relevant in Commander in regular sets (Theros's Gods are one great example of cards that can impact both Commander and Standard), but the wackiest cards can be saved for more specific releases. Commander, and other multiplayer formats, are definitely on our radar now in a much more dramatic fashion than even a few years ago, and it continues to give us new ideas on how to innovate and keep the game fresh.