Posted in Latest Developments on December 14, 2012

o it's Rakdos Week on DailyMTG.com and you know what that means for Latest Developments—it's time to talk about the unleash mechanic and all of the tricks we used to maximize its game play. On its face, unleash is the simplest of puzzles with the simplest of answers: Bigger is better, attacking rules, and blocking is for the lesser guilds. Based on the cards themselves and the Rakdos guild's aggressive role in the broader environment, unleashing is often satisfying and rewarding, an essential trait for any successful mechanic. As a general rule, we put mechanics in Magic sets because we want you to have fun using them. And at the end of the day, even if everyone unleashed every one of these creatures every time they played them, unleash will have delivered a singularly Rakdos play experience.

But the development team had bigger goals for unleash as a mechanic. Basically, we envisioned a world where every unleashing was an opportunity for drama. That requires a level of emotional investment that just isn't possible, when you're ALWAYS or NEVER supposed to unleash. Whenever you're always supposed to take the same action, it can't really be your fault for taking that action. And you can't really learn from your "mistake." At the same time, you can't really take credit for that action and have no chance to feel good about getting it right (which is not the same as feeling good about beating someone down with a curve of unleashed monsters they can't handle).

With that in mind, we developed unleash with a vigilant (just laughed to myself imagining an unleash creature with vigilance) attention to making sure players had real choices. Before we get into examples, I'd like you to consider how much drama William Shakespeare milked out of the simple fact that Hamlet had a tough choice to make.

To Unleash or Not to Unleash, That is the Question 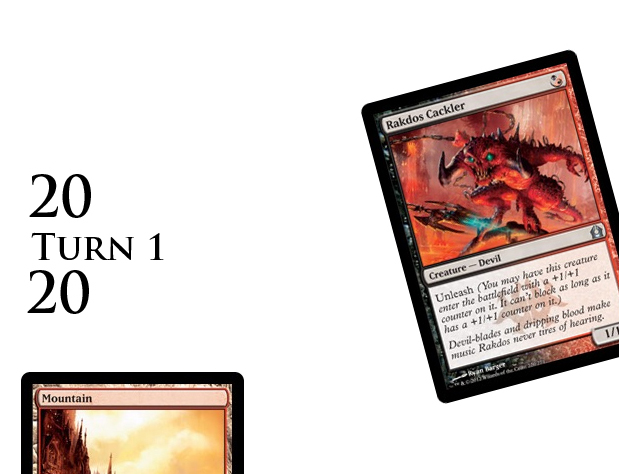 Okay, so I started us off with an easy one. If you put Rakdos Cackler in your deck, you almost definitely specifically imagined how good it would be to cast and unleash turn one on the play. At this point in the game, you can expect that Cackler to deal a big chunk of damage before your opponent even starts to mount a defense. Furthermore, with its "big boy" pants on, that Cackler is burly enough to trade with many three- and four-drops that might try to get in its way.

Let's look at another one: 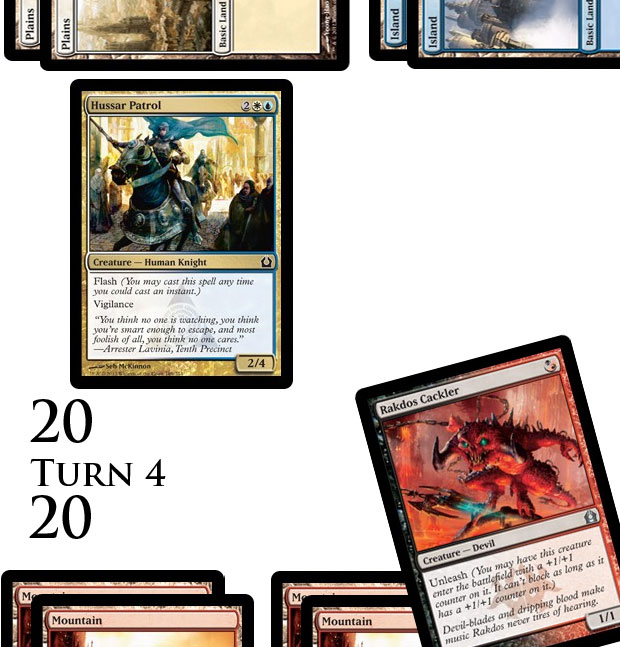 This one's pretty straightforward, too. Unleashing a Rakdos Cackler here doesn't make a lot of short-term sense. I'm not trying to waste your time with no-brainers. I just wanted an obvious example so I could talk through the most basic reason you might not unleash. Basically, whenever unleashing a creature doesn't make it big enough to attack through a bigger defender, the downside of not being able to block with your Rakdos Cackler is much higher. 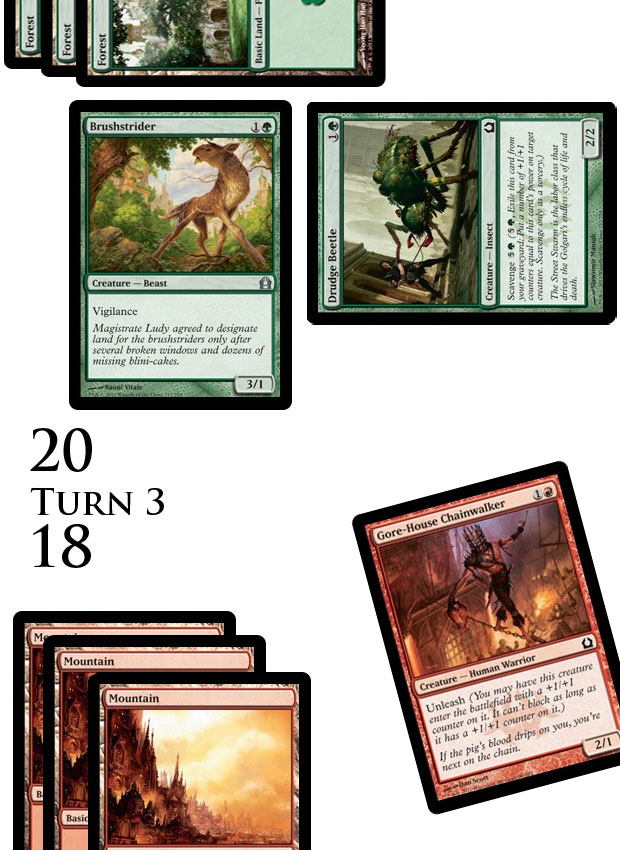 Now it starts to get a little tricky. Simple card-to-card comparisons won't solve this situation for us. Unleashed or not, our plucky and slightly off-kilter Chainwalker will trade with either of these creatures in a fair fight (that's a fight at a fair or street carnival; the other kind of fair fight isn't in the guild charter). Because of its more fragile 2/1 base body, Chainwalker is unable to achieve any red-zone dominance from a +1/+1 counter. What's more, even though that +1/+1 counter won't be worth much against our opponent's board, we'd still have to pay the full price of not being able to block if we unleashed here.

On the other hand, if we don't unleash we hold on to the ability to block instead. And when it's time to block, we get to decide whether our leashed Chainwalker trades with a soon-to-be-Scavenged Drudge Beetle or that annoyingly-always-untapped, life-chomping Brushstrider. Don't rat on me to my fellow Rakdos week writers, but I'm about to say something very un-thematic. 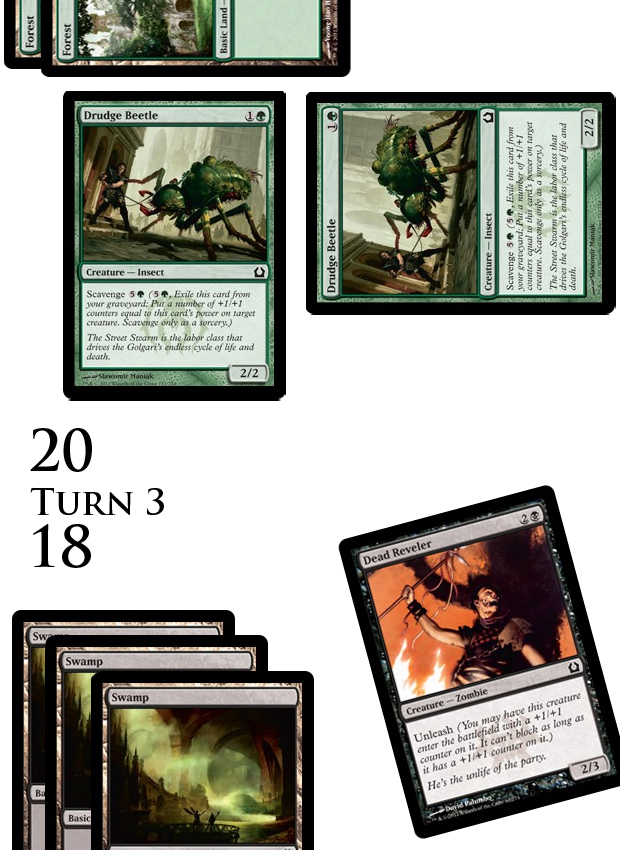 Like the previous example, this one reveals just how unevenly uneven power and toughness can affect the game. At 3/4, an unleashed Reveler is a fearsome attacker that sneers at any single 2/2 defender. But without that 4th power, it is unable to truly punish a double-blocking pair of them. And that only happens if our opponent wants to double-block. Otherwise, his or her pair of 2/2s is free to attack back for 4 whenever he or she wants. If you're counting, that's one more than the 3 damage our unleashed Dead Reveler can deliver.

Meanwhile, as a 2/3 with the ability to block, the leashed Reveler is powerful and tough enough to unflinchingly stare down a large number of 2/2 would-be attackers. 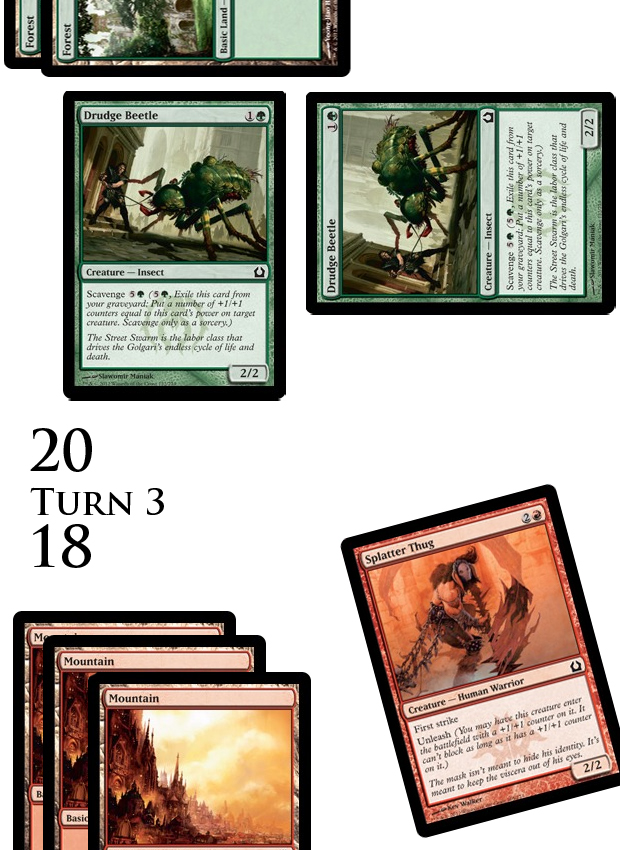 Looks familiar, eh? In the previous examples, I showed you the decision-making impact of some of our straightforward choices about power, toughness, and casting cost. But those aren't the only tools at development's disposal. Splatter Thug and a number of other unleash creatures feature abilities that function very differently on offense and defense.

In this example, for instance, first strike makes Splatter Thug a much more effective attacker than the slightly larger Dead Reveler. As an unleashed 3/3, first strike allows the Thug to fearlessly attack into the pair of 2/2s, although they still output more total damage while attacking back. However, the first striker is equally effective as a first striking 2/2 against those Drudge Beetles.

Well, this isn't such an obvious choice. Making it requires thinking more deeply about the game state and predicting where it's heading. Guessing wrong can quickly leave you on the wrong side of a losing race, lacking the power or flexibility needed to win the day. Unfortunately, my goal today is only to show you all the different ways development tweaked unleash creatures in order to occasionally walk you up to this ledge of uncertainty. To unleash or not to unleash? Such a dramatic question. 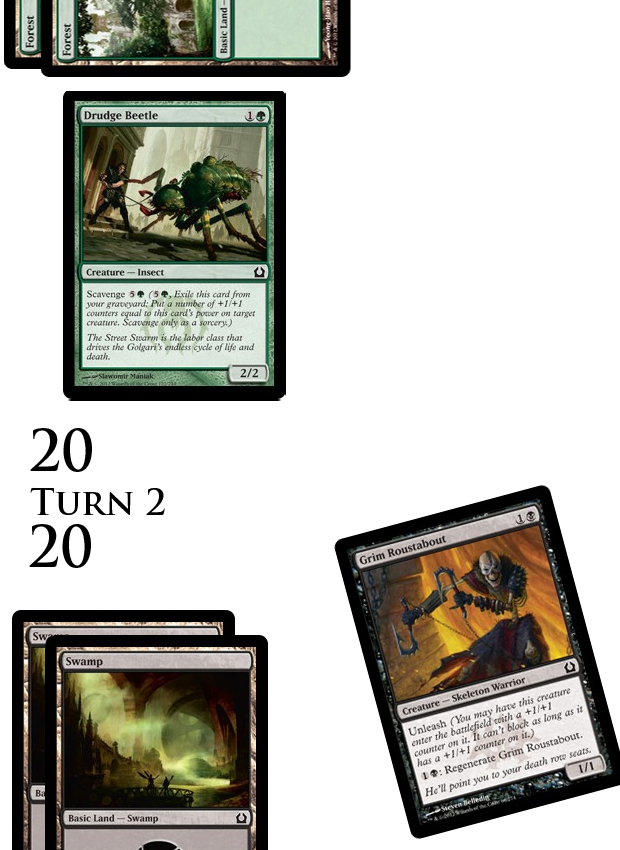 Regeneration is an ability with a bit of an identity crisis. Because a creature can regenerate from any amount of damage, the sky's the limit on how large a creature a regenerator can survive blocking. On the other hand, attacking into a much larger creature forces us to spend mana regenerating while leaving us defenseless against a whomping counterattack. From this angle, regeneration looks like a primarily defensive ability.

But look back at the battlefield above. Against a Drudge Beetle, a 1/1 Roustabout is a dramatically inefficient blocker. Because our mana is likely to be tied up casting stronger, more expensive spells, a leashed Roustabout might not be able to do anything but chump block for the foreseeable future. As an unleashed 2/2, though, Grim Roustabout can assault any number of Drudge Beetles, Knight tokens, Crosstown Couriers, and the like without fear of an untimely second demise. Our opponent is unlikely to block in these situations, which means we get to spend our "regeneration mana" on more creatures.

Rakdos decks are often the aggressor and this brand of relentless aggression can cause real problems for an opponent looking to trade with our early creatures in combat. 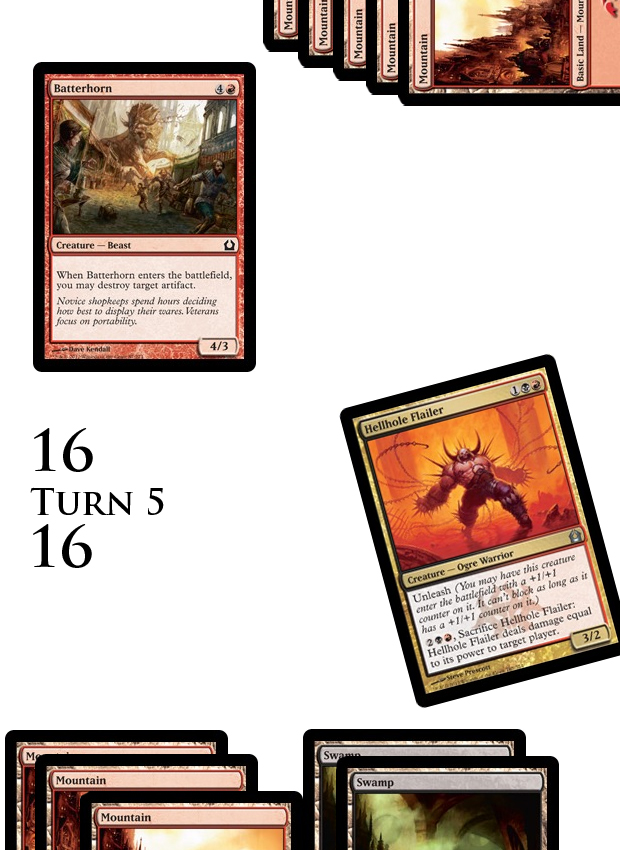 By this point in the game, blows have been exchanged, creatures have clashed valiantly in combat or fallen to devastating spells, and now the battlefield is clear except for a newly cast Batterhorn. Whether or not our Hellhole Flailer is unleashed, it will trade with the opposing 4/3. But the Hellhole Flailer features a relatively unique activated ability that throws some wrinkles into the equation. Since it causes more life loss the bigger it is, Hellhole Flailer is a frequent unleasher. If it gets blocked by that Batterhorn, however, the Flailer only gets to trade in combat OR fling itself at our opponent.

Since Hellhole Flailer can fling itself even while blocking, if we decide not to unleash, we keep both of those options without forcing ourselves to spend extra mana on our own turn. Not only do we preserve the most options by not unleashing, we also get to block an incoming attack while maintaining an offense. 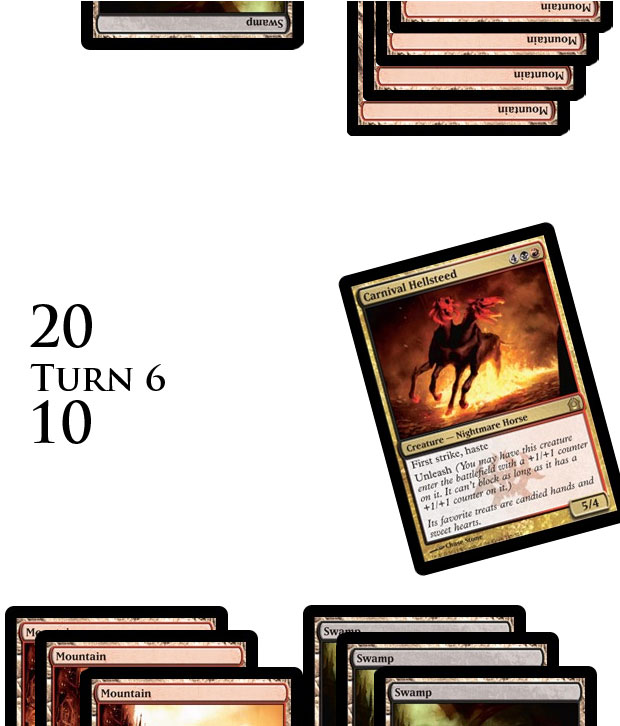 Last one and it looks like another gimme. After all, the way is clear, and this monster is ready to hit the ground running. Why in the world wouldn't we unleash the Carnival Hellsteed like it's hellishly screaming at us to do? Well, for one thing, whether it's a 6/5 or a 5/4, this carnival joyride represents a four-turn clock for our previously untouched opponent. So what are we giving up the ability to block in the future for? Bragging rights?

Ok, we're not unleashing, then. Seems obvious enough, right? Except...did you notice our opponent is also playing a Rakdos deck? Auger Spree is one of the guild's most powerful removal spells. It also can't single-handedly take down an unleashed Hellsteed.

Once again, we are faced with an unleash decision that doesn't resolve neatly after a trivial counting exercise.

By using a variety of tools and by paying constant attention to the rhythms of our playtest games, development attempted to provide you all with a wide variety of in-game tests with which to challenge and measure yourselves.

As the individual games get more complicated, as your range of considerations swell to keep pace with your ever-growing mastery of the game, successfully answering the bloody riddles posed by unleash requires thoughtful assessment and accurate anticipation. But only for an instant. It's still a Rakdos mechanic, after all.

Posted in Latest Developments on December 14, 2012