he card I am showing you today is both iconic and powerful, as well as a long-term staple for both Vintage and Legacy decks. It didn't start out its life intending to be that card, though—it was almost a joke. A card so bad, it was laughable. Something with so little use and function that people would need to build insane decks around it just to try and get anything out of the card. The card grew out of that awkward phase, though, and has become one of the hottest cards in our eternal formats. 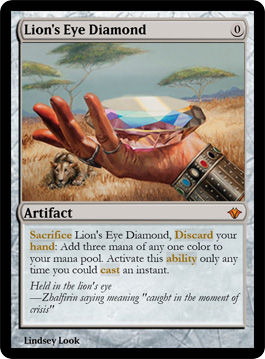 You hear stories of the early days of Magic, mocking cards like Necropotence or Dream Halls, because the public just didn't get how strong they were when they were released. Lion's Eye Diamond is a fascinating card because, unlike many of the strongest cards we have produced over the years, it wasn't that people missed LED's power, it was that it was legitimately bad when it was released. There really wasn't anything broken to do with it.

The first time that Lion's Eye Diamond became a powerful tournament card was in the Broken Jar decks in Standard and Extended that took advantage of the mana the card provided, along with Memory Jar and Yawgmoth's Will. Here is an example of the deck from Grand Prix Vienna:


Unsurprisingly, this deck quickly found itself on the business end of the ban-hammer. Shortly afterwards, it showed up once again because of a rules change. You see, under its original rules, Lion's Eye Diamond could never cast a spell from your hand. You needed to have all of your mana in your pool before you could cast a spell. When Sixth Edition rules were introduced, you were allowed to announce your spell and then generate the mana for it. This had a weird loophole where you could announce a spell and then use Lion's Eye Diamond mana to pay for it.

What do you think of this turn one?

If your opponent didn't have an answer for this, then that was probably the game right there. And this was just an Extended deck—you can just imagine the havoc you could wreak in Vintage with the card. It wasn't long before LED got errata that returned it to its original functionality. After that change, Lion's Eye Diamond once again retreated back to the realm of interesting but hard-to-use combo cards until a new mechanic was introduced in Scourge—storm.

I think that, for many Magic players, storm is synonymous with combo—and for good reason. As far as mechanics go, it is about as friendly to a combo deck as possible, and it has dominated the archetype since its introduction in 2003.

What was so special about storm and why did it have such an impact on Lion's Eye Diamond? Well, before, combo decks had been mostly focused on casting two or three spells that worked in concert to generate an infinite loop, or at least a large enough effect that it would kill your opponent. Think Pandemonium/Phyrexian Dreadnought, Donate/Illusions of Grandeur, or Enduring Renewal/Ornithopter/Goblin Bombardment. Many of these decks could be fast but were generally clunky—the level of disruption we are used to today just didn't exist then. If you weren't countering these combo pieces, or hitting them with a Hymn, you weren't doing a lot to try and stop them.

Storm provided two cards that allowed for near-guaranteed wins if you could just cast a few spells before them—Mind's Desire and Tendrils of Agony. Because of that, you could focus your deck heavily on casting as many spells as possible, then finding the one spell you needed. These decks tended to rely heavily on tutors, and only needed to cast one spell—which worked well with Lion's Eye Diamond, since you could sacrifice the LED in response to casting the tutor to get the mana to be able to cast your spell.

The most famous early version of this deck was pioneered by Mike Long and really shook up the Vintage community:


If you notice, the deck has no win conditions in its main deck. Instead, it is dead-set on generating mana, refilling its hand, and getting enough spells to eventually cast a lethal Tendrils of Agony. One popular use of the card was to cast Burning Wish, then crack an LED. You get a Yawgmoth's Will from your sideboard and cast it, and you can then cast the LED again, as well as any rituals in your graveyard, to either use a tutor effect, or just cast a draw-7 and refill your hand.

Over time, several of the cards in this deck were banned or restricted in Vintage (like Burning Wish), but the printing of Infernal Tutor has kept the deck as a top-tier player, where Lion's Eye Diamond's downside turns the card into another copy of Demonic Tutor.

This deck helps to illustrate the difficulties with having non-rotating formats, as a lot of the work you put into balancing cards adds constraints for the future. If we didn't have Standard as a format, and everyone only played Vintage or Legacy, we would probably have had to ban LED at some point, because it would have constrained what we could've done for future cards—or just pushed the power level of the format too high to let new sets make meaningful impacts on the format without requiring massive power creep. One of the cool things about Vintage and Legacy is they are formats where we allow for a lot larger card power swings than we do in Standard. It's great that these formats help to highlight Magic's past and how it combines with Magic's present.

Eventually, though, Lion's Eye Diamond was restricted in Vintage. While it continues to make an impact, it's much harder to build decks around. That honor has now moved to Legacy. In Legacy, LED remained unrestricted, but the deck lacked many of the restricted draw-7 effects in Vintage, as well as the artifact mana that helped the deck generate so much mana so quickly.


The key turning point for LED in storm decks for Legacy was getting Ad Nauseam in Shards of Alara. It made up for the lack of draw-7s, and casting it would give the Tendrils deck the ability to draw more than enough cards to get its combo off. The power of this deck led to Mystical Tutor being banned shortly before this Grand Prix, but the fact that the deck was able to Top 8 without that card's help shows just how powerful the deck was.

Discarding for Fun and Profit

Over time, as the game has progressed, and more and more cards have become available, new cards have been printed that interact favorably with LED's discard. And we're not talking "turn-one LED into Arrogant Wurm double Rootwalla" stuff, we're talking huge combos. When Faithless Looting was printed in Dark Ascension, it was obvious that it could fit into Legacy Dredge as another Careful Study type of effect, but the real power of the card was quickly realized when the decks began including Lion's Eye Diamond. All of a sudden, Dredge was capable of turn-one or two kills by discarding dredge cards with LED and using the mana to fuel a flashed back Faithless Looting, getting Narcomoebas and Bridges from Below, and flashing back Dread Return to reanimate a Flame-Kin Zealot or Griselbrand.


While the deck was certainly capable of doing turn-one or turn-two kills before the addition of LED and Faithless Looting, the cards definitely improved the explosiveness of the deck, even though it did cost some amount of resilience.

I don't know what the future holds for Lion's Eye Diamond, but it looks pretty bright. I look forward to the day when yet another Legacy or Vintage deck can come out of the card, and maybe even find a new way to use it.

I've heard some questions on social media about the size of Vintage Masters. While Vintage Masters has the standard number of commons and uncommons, there are more total rare and mythic rare cards than a typical large set often has. I asked Vintage Masters's lead developer Ian Duke for some more information. Here's what he had to say:

Thanks, Ian! Next week, I have another preview article, this time for a set that is near and dear to my heart—one of the first sets I worked on when I started at Wizards of the Coast—Conspiracy. I look forward to all of you seeing some of the amazingness we have in the set.

Until next week,
Sam