Dissension, being the third set in the block, was at the mercy of the Guildpact development team when it came to deciding which ten-card cycles we could innovate on as opposed to the ones we'd be forced to maintain the status quo on. If Guildpact followed what Ravnica did with a particular cycle, Dissension would be obligated to do the same. If Guildpact deviated from Ravnica, Dissension would need to deviate as well.

I remember turning in a tweak on the uncommon guildhalls in Guildpact design—the three from that set initially didn't have reusable tap abilities like Sunhome and Vitu-Ghazi did, but instead had more powerful one-shot sacrifice abilities. The Guildpact development team held onto that idea for a while—long enough for the Dissension design team to come up with our own twist on the uncommon lands. The design file we handed over had uncommon lands with the guild keywords; for example, the Rakdos land gained an ability when you were hellbent (had no cards in hand).

Of course, as you all know by now, the Guildpact development team reverted their guildhalls back to the Ravnica model (there were creative issues with guildhalls that were sacrificed), and so the Dissension ones changed to fall in line.

But there is one ten-card cycle left in the block that did “evolve” over three sets—the enhanced spells.

Ravnica did a pretty good job with its enhanced spells. Each one was an instant or sorcery with an “in-color effect” that also offered a second “off-color effect” essentially for free if the correct color of mana was spent to play it. For example:

The effects marked with a “*” are ones I'd consider to be slightly off from what the traditional color pie would dictate (milling is Blue, for example, not Black), but they work fine because the cards as wholes still fit their guilds' themes and, let's face it, those abilities are close enough to being the right color that I doubt many of you even blinked.

Guildpact took a new angle with enhanced cards, opting to do creatures with comes into play abilities that happened if you paid for the creature with the correct color of mana.

Having had time to digest these cards, I wish we had juiced up the creatures just a tad more… given them a little something more to make the bodies themselves a bit more unique and in-color. After all, Green can get a 2/1 for two just as easily as Red. Why is the Red part a 2/1 and the Green part Shatter? Red can also get 3/2 for four just like Green, and Black can get 2/1 flying Dusk Imp for three mana. Revenant Patriarch—the only uncommon of the six—does the best job of having a body that fits its main color and an ability that fits the enhanced color. The Izzet ones were okay, since Red bodies and Blue bodies tend to have pretty distinctly different statistics, but the Gruul pair and Shrieking Grotesque slightly irk the designer in me. That said, the cards' power levels are all quite reasonable and many of them have shown up in Constructed, which is fantastic.

Armed with this knowledge, the Dissension team set out to come up with the next twist on enhanced cards. We came to the conclusion very quickly that the best option would be the opposite of the Guildpact ones—we wanted spell effects that you could turn into creatures if the correct color of mana was paid for it.

Let's reverse engineer one of these cards. Start with a spell that is very similar to Torment's Acorn Harvest—a four-mana sorcery that puts two 1/1 green Squirrel creature tokens into play.

Why Snakes? Because they're cool! Blue/Green already has one very famous Snake in Magic (Mystic Snake), and the Kamigawa Snake legends haven't gotten any love so far in Ravnica.

Okay, so we have a sorcery that makes tokens. It's part of the Simic guild, which means we need the enhanced part of it to make a creature that feels Blue. What does Blue usually get for four mana? How about a 2/2 flier. So now we have…

That card makes sense, but the last thing this block needs is a billion more different kinds of tokens. Plus, cards that make two different kinds of tokens are generally messy and confusing to play with. (“No, the dime is the 2/2. The penny that is attacking you is the 1/1.”) To solve this problem, we simply fold the enhanced creature into the spell like so:

[Acorn Couatl]
3G
Creature – Snake
2/2
Flying
When CARDNAME comes into play, put two 1/1 green Snake creature tokens into play, then sacrifice CARDNAME unless U was spent to play it.

This is the card design handed off to development, complete with playtest name. (A couatl is a Dungeons & Dragons monster that is a winged snake.) In actuality, the design team arrived at this template right away without going through the process I outlined above, but I wanted to walk you through it just to see how they compare to the Guildpact ones.

Here's the final card as printed: 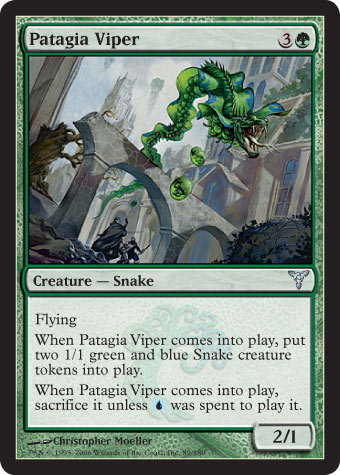 Some notes on this card and cycle:

As you can see, we did our best to give the “bodies” abilities that really highlighted one color. You'll have to trust me that the comes-into-play abilities really highlight the other color. Or, just go see for yourself this weekend at the Prerelease! I, along with other members of R&D, will be at the Seattle event rubbing elbows with the players.

If you plan on going and want to bone up on the three new mechanics (forecast, hellbent, and graft), plus get a refresher on the ins and outs of split cards, check out the Dissension FAQ here (doc file).

I find Visions to be much more exciting than Mirage. Maybe I'll show off my Chimera/Knight of the Mists/Imagecrafter deck some day!

[Ed. note: Join Aaron this Monday the 24th from 4 - 5 pm PST in TCG Live! chat where everyone is welcome to come discuss all the news revealed from the weekend's Dissension prerelease events.]