Duels and the Dark Realms

This article is something of a two-parter for a two-parter. Today, I want to talk about (a) the Magic card Liliana of the Dark Realms and (b) the Liliana deck for Duels of the Planeswalkers 2013. Next week, I want to talk more broadly about Duels of the Planeswalkers 2013, Duels in general, and how we develop both Duels and the sets (like Magic 2013—my first lead!) that tie in with it.

That's a lot of chatter.

First, though, I should probably talk about what on Earth Duels of the Planeswalkers is in the first place.

Get Over Here and Play a Video Game

Duels of the Planeswalkers is a collaborative effort between Wizards of the Coast and the awesome folks at Stainless Games. It's basically our attempt at creating a kind of "arcade game" experience using Magic cards and decks. What does that mean? It's streamlined, fast-paced, sleek, and intuitive, and is easy to play in five-minute or five-hour bursts. You don't just have to take my word for it, though. The Duels series has been a perennial Top-10 product on XBox live, and PCGamer magazine recently declared it to be one of the "Top 100 Games of All Time" and ranked it #4 on its "15 best games for your laptop" list.

If I sound kind of gushy, that's 'cause I am. In general I don't play all that much "e-Magic"—one too many misclick rage-quits for this guy—but I've played through every second of Duels. I was on both Challenges and deck design teams for Duels 2010 and Duels 2012 and spent a lot of time working to integrate Magic 2013 with Duels 2013 as a cohesive experience. So I more or less love this product, is what I am trying to say.

Anyway. The deal is it's sort of like a fighting game with Magic cards. You play through a campaign ladder battling your deck against a bunch of rival opponents, unlocking cards along the way. There are some mini-games and side quests you can opt into and eventually you can tackle massive boss fights and an über-difficult Revenge Mode. 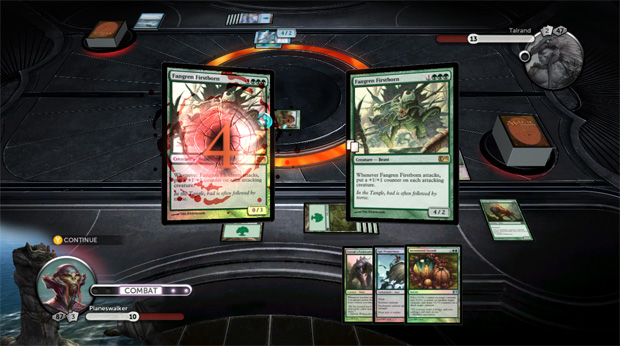 Screenshot of Duels of the Planeswalkers 2013 for Xbox 360

This is just the PvE (player vs. environment) experience, of course. Duels also features robust PvP (player vs. player) game play, if you're into that sort of thing. You've got your standard one-on-one battle, naturally, where you can play and customize any of the decks from the ladder (now boasting an unprecedented number of unlocks) against your friends. But because multiplayer is, well, multiplayer, you can also loop your friends into Two-Headed Giant and Planechase, featuring all-new plane cards from Planechase (2012 Edition).

I am sure someone on a marketing team somewhere has put together a far more robust explanation, which you can check out here if you're into that sort of thing. It probably has sleek graphics and slick trailers and polished advertising copy. I'm just a dude who writes stuff and makes games. What I can tell you is that it's just an absolute steal. Forty hours of game play is a really conservative estimate, and you're not just grinding quests for gold to buy a hammer that entire time. You're playing Magic, the best game in the world.

So what does all this have to do with Liliana?

Magic 2013 features five Planeswalkers and five "generals," legendary creatures whose abilities lend themselves to certain themes. All of them get their own decks in Duels 2013, making for ten playable decks at release. The idea is that the Duels decklists should reflect the abilities of each "general" and each Planeswalker card, tying the two together in a visceral, coherent way.

Okay. So this deck is something like a natural extension of Liliana—her essential expression in sixty-card form.

When I previewed my last Planeswalker, Tibalt, the Fiend-Blooded, I took it piecemeal. For Liliana, I want to be a bit more big-picture:

Girl likes herself some Swamps. 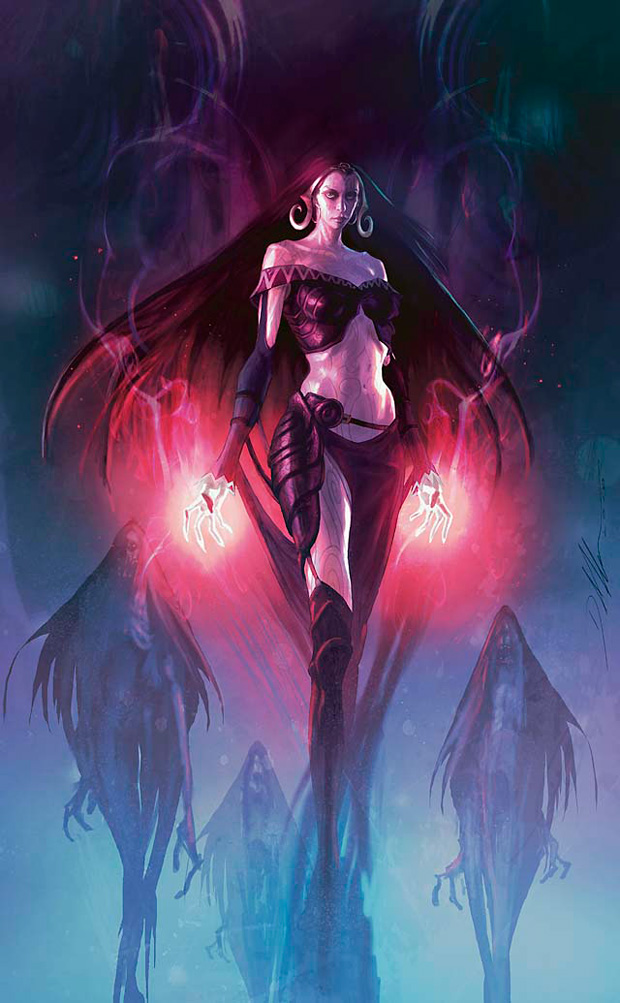 Liliana of the Dark Realms | Art by D. Alexander Gregory

The ability to +1 and be up a card isn't shabby. In fact, the last time we saw that was on Tezzeret, Agent of Bolas—and with him, you missed sometimes. Before that, the last four-mana 'walker who netted you a card was Jace.

Now, I'm not saying Land Granting for a Swamp is Jace-level, because it's obviously not. What I will say is that if you are sitting there drawing an extra card every turn while fueling your big spells, it's going to be pretty hard to lose the game.

Your opponents, of course, aren't likely to twiddle their thumbs doing nothing while you gradually accumulate advantage. Fortunately, like Vanilla Ice, Lily here is perfectly willing to solve your problems. For the low, low cost of 3 loyalty, Ms. Vess is capable of killing almost any creature on the table. Don't get me wrong—if you want to do it immediately, she's not going to stick around real long. We can't all be winners all of the time. But if you can cast her into an empty board, maybe usingcardslikethese, she can take time out of her busy day to blunderbuss your opponents' biggest threats. 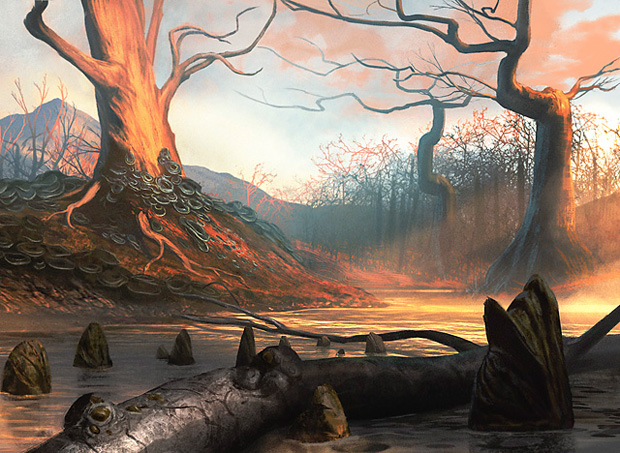 That's not even the whole story, though. At some point, you need to get around to actually ending the game. I know, I know, that's the boring part. But after you've fetched out a Swamp or four and need to start doming your opponent 8 points at a time, Liliana here is ready and willing to help you out. And if that damage is Infect damage? So much the better!

Sure, a few Swamps will get you ahead. But what if you're not looking to cast, say, Grave Titans. What if your plans aim a little... higher? Eldrazi-level higher. Drain-Life-For-20+ higher. Yet-To-Be-Spoiled-Totally-Bananas-Expensive-Spell higher? Look, Liliana bargained with some demons, okay! She's got herself some power, and I don't mean power like low-level county clerks have power. I mean El Presidente, You-Can-Have-Whatever-You-Like style Go-Big-Or-Go-Home power. Every Swamp taps for four? Lake of the Dead, no drawback? Break out the dice—you're going to need them.

Oh, and savvy readers will note that she doesn't just get basic Swamps.

Though I'm not sure how that could ever matter, really. There aren't any other kinds of Swamp legal in Standard, and I can't see Snow coming back any time soon (it's currently pretty warm up here in lovely Renton, WA, and we're not exactly hankering to give ourselves the chills).

I'm just pointing that out for completeness' sake. Due diligence. Do it right or don't do it at all, etc., etc. I would be remiss if I didn't.

So Liliana's deck, and her cards, should care a lot about Swamps: getting them into play, using them effectively, and clearing out anything that might try to trump those plans.

Here's the list. I have no idea how many of these cards have been spoiled yet. So... if you know it, awesome! If you don't know it... speculate!

2 Veilborn Ghoul 1 Rise from the Grave


Some of those numbers look off? See any glaring omissions? Well, that's because what I haven't spoiled are the thirty unlocks you can earn over the course of playing games. So it's fair to say the deck can get quite a bit more powerful. I'm looking at a few different Demons, six or seven ways to kill things dead, and a really sweet piece of rk post artwork, just to name a few. But I'm not one to give away all my secrets, so as to exactly what all those unlocks are? I s'pose you'll have to find out...

Anyway, this is a mana-hungry, power-hungry, classically inclined mono-black midrange deck. The plan is simple: get about a billion Swamps in play and tap out to cast spells until your opponent dies. You've got a lot of ways to kill stuff, a fair amount of direct damage, some Fatty Boom Boom monsters, and some solid recursive card advantage. Were Lily herself a part of Duels, she'd fit right in (give my Vampire Nighthawk +7/+7...).

As just a heads-up, you can expect something similar from the other Planeswalker decks in Duels 2013. I'm going to talk more next week about how we go about designing these decks, but the idea is to create a fun, diverse play experience that captures the feel of Magic's characters and color pie. The power level should be around that of an Intro Pack. We're not putting Delver and Wolf Run Ramp in here, because that's not the point. But we do want to capture the strategic definition that's a huge part of what makes Magic fun.

As to how we did that for Duels 2013 specifically?

Well, stay tuned for next week. :)