Duster in the Wind

One little Kithkin who does its job and then some.

So today I'll take you through how much development can go into even one of the humblest, lowest-profile cards in all of Eventide. Today's honoree? The common, white, five-mana 2/3 flier: Kithkin Spellduster. While he may not be the talk of the town, he's got several important jobs to do in Eventide, and he does them well. And I've got five different development stories to show you how.

Test of the Twins

There's a long history of white creatures dissolving enchantments, and Morningtide and Eventide each had one, until we noticed a problem between them. See if you can spot it:

CW02_EVE
Winged Demystifier
3W
Creature - Kithkin Wizard
2/2
Flying
Persist (When this creature is put into a graveyard from play, if it had no -1/-1 counters on it, return it to play under its owner's control with a -1/-1 counter on it.)
1W, Sacrifice CARDNAME: Destroy target enchantment.

What's the problem with these two cards? The problem is they're actually both the same card. Each one comes out as a

and shrink your flier to 1/1 to destroy an enchantment, and then you can pay

and sacrifice your flier to destroy a second enchantment. Continuing the similarity, adding +1/+1 counters to either card lets you destroy more enchantments, whether by adding more +1/+1 counter ammunition to spend or by removing the -1/-1 counter from persist. The two versions interact differently against Shock or combat damage, but the overall role of the two cards is very much the same.

Both Morningtide and Eventide were in development at the time, and the two cards were too similar. Whether by changing numbers or changing abilities, one of them would have to move. The two cards edged into a tense staring contest. Each card was poised to attack, waiting for the other one to blink. It was so quiet you could hear a +1/+1 counter drop.

Suddenly a fierce hail of demystifying broke out, with enchantments being torn apart right and left! Or maybe that was some movie I saw. Oh right, I am getting it confused with the movie "Hexhunter vs. Wispmare: Tempest of Light." In any case, The Morningtide team decided to move its card to

with one +1/+1 counter, largely to make room for Morningtide's Burrenton Bombardier to change to

2/2 flying, and for Kithkin Zephyrnaut, Order of the Golden Cricket, and Ballyrush Banneret all to settle on 2 power at white common.

To smooth out the mana costs and power/toughness of the set, Kithkin Spellduster eventually advanced to his final

2/2 flier slot, once so coveted by the two cards, ended up abandoned by both of them.

The Eventide Style of Persist

Now the second story. Part of the key to block design is finding ways to link the sets in the block together, yet give each of the sets its own unique identity. Well-designed block plans perform this balancing act on a wide spectrum, from large and obvious to small and subtle.

The most obvious, global way that Shadowmoor and Eventide "compare and contrast" in this manner is that they're both hybrid sets, but one is allied-color and one is enemy-color. On the other end of the spectrum, one of the most subtle ways that Eventide is different from Shadowmoor is the way the two sets use persist.

Time for a third story. Fellow columnist and Magic R&D all-star Doug Beyer did the concepting work for Eventide. In addition to his role on the creative team, Doug had also worked on the development teams for Lorwyn and Shadowmoor, giving him considerable insight into the mechanics of the two blocks. During Eventide concepting, Doug used this mechanical knowledge to help set up flavor concepts and creature types that would intentionally flow well into the individual tribal themes of Lorwyn and Morningtide.

One example is Kithkin Spellduster. Before writing out a full concept for the card, Doug wrote this note into Multiverse to show his creative team colleagues what he was leaning towards:

Doug's right. Burrenton Bombardier, Mosquito Guard, and Rustic Clachan are all Kithkin cards with reinforce, and reinforcing your persist creature to recharge it is a fun little combo. Reinforce cards like the Pro Tour–winning card Mosquito Guard already let you convert spells and lands into +1/+1 counters. Combining them with Kithkin Spellduster lets you convert those spells and lands into extra Demystifys.

Doug Beyer and Eventide lead developer Matt Place also worked together to ensure that Nettle Sentinel, Twinblade Slasher, Talara's Battalion, and Bloom Tender were all Elves, that Wake Thrasher was a Merfolk, and the other creatures were particular creature types, in order to open them up to mechanical synergies with Lorwyn and Morningtide.

Story number four: The "class" creature type is especially relevant on persist cards too. Developer Mons Johnson quickly found during Shadowmoor development that having the persist creature Murderous Redcap be a Goblin Rogue, as the Redcap once was, was a particularly terrible idea.

Every time the Murderous Redcap came back into play with a -1/-1 counter through Persist, Oona's Blackguard put a +1/+1 counter on the Redcap because it was a Rogue. There's a rule that a +1/+1 counter and a -1/-1 counter on the same creature annihilate each other and disappear. So the Redcap would be back without any counters on it at all, dealing 2 damage to the opponent's face. Sacrifice the Redcap again, deal 2 more damage. Sacrifice it 8 more times, and, well, you get the idea.

This combo was a little too consistent, especially since one of the combo pieces had persist, and another of the combo pieces didn't even need to be in play (the Greater Gargadon). It was enough to get us to change the Murderous Redcap's creature type to the even more flavorful Goblin Assassin.

Message to Scarblade Elite: You're welcome.

Mons had hit the nail on the head twice in a row, and it was enough to make us wonder: Should we just yank Rogue, Warrior, and Wizard—the three creature types with similar lords in Morningtide—off of all the persist creatures? This would damage some of the creative choices, since the concept of Puppeteer Clique was very much a Wizard, and the concept of Scuzzback Marauders was very much a Warrior.

In the end, as we often decide with infinite win-the-game combos, we decided that these combos between persist and Morningtide class lords are actually pretty fun and good for Magic, as long as they're not too hyper-efficient. Our playtesting had suggested that that Murderous Redcap, Oona's Blackguard, Safehold Elite, and Bramblewood Paragon all had a shot to be powerful tournament contenders (as they have indeed turned out to be, at varying levels) even without creating infinite win-the-game combos between them.

But if people are willing to commit to their combos with a higher-mana-cost persist creature, instead of the two-mana Safehold Elite or the very powerful four-mana Murderous Redcap, we wanted to give them the chance to "go infinite" and win the game that way. So while Safehold Elite and Murderous Redcap became Scouts and Assassins, you can still go infinite with these combos with five-mana Persist Warriors, Wizards, and Rogues. 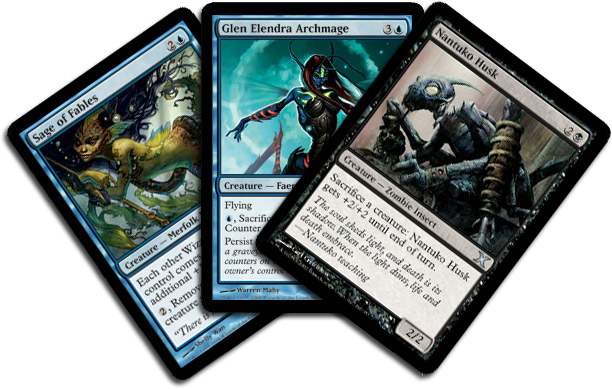 The Gift of Lockdown

And the final story. All ten Steel of the Godhead–style hybrid Auras in Shadowmoor and Eventide can be totally devastating if they don't get stopped. Fortunately there are a variety of ways to stop them. One of the reasons Kithkin Spellduster is so good at blowing up Auras is to put commons into Shadowmoor and Eventide that are good at blowing up the hybrid Auras before they get too out of hand. Another common that's fantastic at blowing up the Auras in Eventide is Wickerbough Elder.

But although Kithkin Spellduster and Wickerbough Elder were intended to be able blow up the hybrid Auras, the black-green Aura Gift of the Deity didn't get the memo. Midway through Eventide development, Gift of the Deity cost

Many debates had already been waged about whether these ten hybrid Auras should be common or uncommon. The development team leads for Shadowmoor and Eventide had both concluded that the auras should be both common and very powerful—as long as they landed on the correctly colored creatures and didn't get disrupted by the opponent.

The chance of the Auras getting ruined by the opponent is a big part of why the Auras can be so powerful. When they work, they are awesome. But when you play a Cerulean Wisps in the middle of combat to turn the opposing enchanted creature blue, turn off all of its Aura's color-based abilities, and kill both the enchanted creature and the Aura while drawing a card in the process, you can totally crush them.

The card "Lure" has always been a very powerful uncommon. Lure effects with a power/toughness bonus are even nastier, since you can lock down your opponent from ever building up creatures. For example, if you play Gift of the Deity on your Rendclaw Troll on turn four and attack, you can kill an opposing creature or two by forcing them to block, and stick your opponent with a nasty dilemma. If your opponent plays anything up to a 3/6, you just attack, force it to block, and kill it, losing nothing. If he or she doesn't play a creature, you just smash your opponent for 4 damage.

If your opponent plays the red-white Aura Scourge of the Nobilis, Kithkin Spellduster and Wickerbough Elder are decent answers. You'll take some damage, then play your creature and destroy the Aura.

In the end, the combination of Lure, power-pumping, toughness-pumping, and deathtouch in a four mana version of Gift of the Deity just locked down too many people too quickly during playtesting, stopping them from playing any more creatures too early. We still loved the thrill of power it gives when you play it, but five mana gives just a bit more breathing room before the pummeling starts.

And it gives you a little more time to play and activate your Wickerbough Elder or Kithkin Spellduster without them getting bludgeoned to death by Gift of the Deity before they can activate to destroy it.

Wizards sent a huge contingent, over a dozen people, to the Seattle pre-release to gunsling and talk about Eventide. It's hard to resist the lure of playing with real Magic cards instead of playtest stickers! Mark Gottlieb happened to find himself in Denver that weekend, so of course he dropped in on the Denver prerelease to gunsling and have a good time.