, in no particular order, are my ten musings on enchantments: 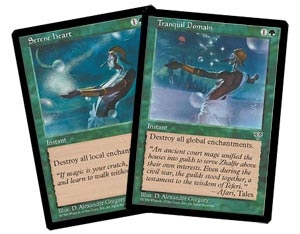 1) Enchantments come in two types, Aura and, well, “non-Aura.” Aura is a relatively new term, introduced for Ninth Edition. For a decent amount of the game’s life span, Auras were called “local enchantments” (as they affect a small area of the game, namely the permanents they enchant) and non-Auras were called “global enchantments” (as they tend to affect the whole game). See the printed versions of the Mirage cards Serene Heart and Tranquil Domain for this terminology in action. These days, R&D does use the word “Aura” in conversation quite a bit, but we still often use “global enchantment” for lack of a better term.

2) World Enchantments (formerly “Enchant Worlds”) are a subset of enchantments that are all “global” and have their own modified version of the “legend rule” called the “world rule”:

That’s 402.5i in the Comprehensive Rules, for those of you that care. Other types of permanents could have the world supertype, but none do currently... and to be honest, making some isn’t part of anyone’s plans around here. We haven’t done a world card since Visions.

3) Auras tend to skew toward common and uncommon in Magic sets, and non-Auras skew toward rare. The reason R&D does this is because non-Auras are much more non-interactive cards—most people’s decks aren’t built to handle them. So an enchantment that generates a powerful effect like Opposition, Teferi’s Moat, or Debtors’ Knell can easily dominate a game in a way that a creature or sorcery that generated a similar effect would not. Auras, on the other hand, have plenty of downside, but at the same time can be much more fun. Read all about Auras with “enchant creature” in Mark Rosewater’s article Some Enchanted Card Type.

4) The color pie treats enchantments in an odd way—some colors get to interact with them both positively and negatively, and some colors do not. On the interactive side, we have green and white. From the game’s very first printing, green had both a powerful enchantment-loving card in Verduran Enchantress and a powerful enchantment-hating card in Tranquility. It would be unfair to say that green either “loves” or “hates” enchantments, but rather that it simply “cares about them.” In the years since, green has gotten more love (Rabid Wombat, Argothian Enchantress, Dowsing Shaman) and more hate (any number of Tranquility effects, highlighted by Tranquil Grove).

White began life as the color with the most enchantments (getting a cycle of Circles and a cycle of Wards will do that), but has since moved into the same territory as green as far as love-hate goes—it has rewarding cards like Mesa Enchantress, Replenish, and Academy Rector and destructive cards like Tempest of Light and Nova Cleric. Blue is in the middle, with a few cards that are anti-enchantment (Annul, Steal Enchantment) and a few that are pro-enchantment (Fledgling Osprey, Academy Researchers, Auramancer’s Guise).

Black and red are at the complete other end of the spectrum; they don’t benefit from enchantments, and they certainly have a difficult—often impossible—time destroying them. The number of black and red non-enchantment cards that interact with enchantments is very small and tend to be more odd than effective—Irini Sengir and Aura Barbs leap to mind. The inability of black and red to destroy enchantments has come to define those colors almost as much as the things they are actually good at, like killing creatures and lands. So even though green and white are the colors that love destroying enchantments, I’d have to say that the colors that actually “hate” them—in the true English meaning of the word—are black and red.

5) The Time Spiral set proper (not including the “timeshifted” cards) was 301 cards large, yet only had a single non-Aura enchantment: Opal Guardian, which is just a creature in waiting. Why no enchantments? There are several reasons. One, we put so many saucy, game-altering build-around enchantments in the timeshifted set—Enduring Renewal, Stormbind, Pandemonium, Bad Moon, Sacred Mesa, Teferi’s Moat, Conspiracy, etc.—that it was going to be impossible to top them with new cards. Two, the suspend mechanic in many cases causes cards to behave like enchantments—when Greater Gargadon is suspended, you effectively have an enchantment in play that lets you sacrifice permanents for a benefit; likewise, Curse of the Cabal is like an enchantment that causes your opponents to sacrifice permanents. And third, we took the opportunity to introduce “enchant player” in the set; Paradox Haze is an Aura that behaves very much like a non-Aura.

7) The astute among you will have noticed that many of the cards in the above list are from Future Sight—that set trod much new ground as far as enchantments are concerned, the biggest of which was the creation of enchantments with tap abilities. 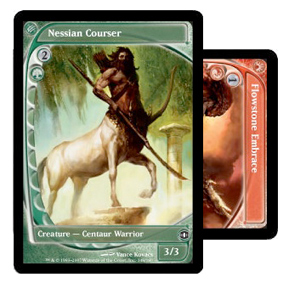 I was certainly jarred the first time I saw enchantments that could tap in the set; after all, the inability to tap is a key reason as to why enchantments feel different from artifacts. In retrospect, the Auras that can tap were a bad idea—the orientation of cards attached to creatures being different than that of the creature is hard to process for a lot of people. For years, whenever I attacked with a creature enchanted with Holy Strength, I tapped the Holy Strength along with the creature. I have since cured myself of that behavior, but many people still play that way, and having to know if the Aura is tapped or not independently of the creature is unfortunate.

But the “global” enchantments that can tap—like Witch’s Mist—are interesting and easy to understand. And they play differently than artifacts because you can put much more color-specific abilities on enchantments. Will we be doing more “tap” enchantments in the near future? I don’t think so, but it’s probably not as big a deal as most of us think.

8) Licids—creatures that can turn into Auras—are some of the most confusing cards in the game. They have been retemplated many times, the rules surrounding them have been rewritten, and, even if you understand all the rules perfectly, they create game states that are incredibly difficult to puzzle through. That said, we almost brought them back in Time Spiral. Transmogrifying Licid was in the timeshifted set for a long time, and there was a cycle of Licids that gave the creatures they enchanted old keywords like shadow and flanking. Rules manager Paul Barclay did some admirable work to get the text on the cards to be understandable, but in the end the game play surrounding them was deemed bad enough to kill all the Licids from the set.

9) Many sets have cycles of enchantments even when enchantments aren’t a theme of that set. Champions of Kamigawa had the popular Honden as well a cycle of common Auras with flash. Scourge had “Dragon Auras.” Betrayers had the Genju. My favorite of all those sub-theme cycles are the ones in Ravnica and Guildpact (no, not the Leylines, even though they are my creation).

Ravnica has a cycle of Auras with comes-into-play abilities such as Faith’s Fetters and Galvanic Arc. The idea for them came from Richard Garfield, who was on Ravnica‘s design team. Richard, whose contributions to modern Magic come in fits and starts, showed up to the team with a bunch of random ideas he had been stockpiling, including the idea for Auras with comes-into-play abilities. His example was something like this:

This is a top-down design, meant to capture the flavor of whipping the creature to get it to work faster. The execution wasn’t perfect, but the idea was very good, and Mark Rosewater fleshed it out into the cycle that ended up in the set. We eventually added cards like Auratouched Mage, Mark of Eviction, Dowsing Shaman, and Drake Familiar to enable the theme.

When Guildpact design was underway, there was a desire to continue the enchantment theme that began in Ravnica. Many ideas were bandied about, including enchantments that were free if played on creatures that were already enchanted, but it was Paul Barclay that came up with the design that eventually turned into the Magemark cycle. I really enjoy that cycle because it makes other enchanted creatures better without having to load all the Auras onto the same guy; they’re just as good if you spread them out.

10) In closing, there is still a ton we can do with enchantments. Many sets have used them as subthemes—Ravnica, Champions of Kamigawa, even more minor themes in Visions, Mercadian Masques, and Odyssey. The Urza block had a large enchantment theme, although it wasn’t played up and was overshadowed by the powerful artifacts the set contained (and calling the block the “Artifacts Cycle” didn’t help either). Each new block we do hints at all the possibilities the enchantment theme could have, yet we’ve never really tried tying them all together.

Enchantments are one of the remaining great areas of design space that we could dedicate an entire block to. Will it happen someday? Absolutely. Will it be soon? I’m not telling. But it should be fun!