Posted in Latest Developments on August 10, 2007

you haven't checked out the Storyteller Ballot for this year's Magic Invitational, I implore you to do so now. The submissions range from merely very entertaining to wildly hilarious.

When I look at those entries and think about the buzz they'll generate and the fun they just injected into Magic as a whole, it really makes me happy that we're opening up the Magic Invitational more and more.

I'm speaking as an individual here, not as a company director, when I say that I would love for the Invitational to be less like the All-Star Game and more like "Dancing With The Stars" in the future. Unsanctioned wacky fun-filled spectacle has never been a great match for me with Pro Tour, and I don't think it serves the role it used to with regards to professional players any more.

Back in the day, there wasn't much being offered to so-called "pro" Magic players in the way of perks. You got money if you did well at an event, you got invited back to the next one, and that was about it. The Invitational was a really nice cookie—a present of sorts—to the players that dedicated themselves to the game, and at the same time it was a nice event for fans to watch. Players really coveted it, put a lot of effort into the potential prize cards they submitted, the decks they brought to play, and the reports they wrote afterwards.

In the years since, we've been lavishing things upon our top Pro Players. First there was a Masters Series—a string of tournaments invented to give away more money—which eventually turned into a flat end-of-the-year payout. That payout eventually turned into the Players Club with its Pro Lounge at events, its appearance fees, plane tickets, and hotel rooms. There are now Pro Player Cards that allow us to star-build these guys, and we even have a Hall of Fame that comes with its own massive list of benefits. The Invitational is no longer all that special in the big picture, and it shows.

Maybe people aren't practicing for it any less than they did before. Maybe they aren't slacking off when it comes to designing prize cards any more than they did before. But there absolutely aren't many tournament reports written after the event. They were the one thing that brought the event to life, the one bit of repayment we expected from the participants that really made the thing seem real to many onlookers. It saddens me greatly that they just aren't happening anymore, even though we've poked and prodded the participants over and over. (Kudos to the Jeff Cunninghams of the world—those who still wrote reports when no one else was willing to).

We have legions of players, judges, writers, and fans who aren't pros and who would positively kill to be able to participate in something like the Magic Invitational. They eat, sleep, and breathe Magic, and do marvelous things for the game and its community. We don't fly them anywhere, pay them $500 for showing up anywhere, or put their mugs in tournament packs. But they are awesome and should get a chance to shine. I'm sure they'd appreciate it, make a big deal about it, and give everyone like them someone to really cheer for. Everyman deserves a seat—maybe more than one—at the table.

This year's Storyteller Ballot is a step in that direction. There's a mix of longtime pros who still find time to contribute in other ways and top writers from various Internet sites. It promises to make the event more fun already. In the future, I want to continue to modify what it means to "deserve" to go to the Invitational.

Maybe a judge should get to go. Maybe the winners of various lower-level Championships should all get on the ballot. Most definitely more writers. Of course, the top pros deserve to be there as well, and will continue to be invited. Everyone wants to watch to see what Kenji and Wafo-Tapa are going to come up with; I just think it would be more fun overall to represent more areas of the community in the event as well.

If you win a Pro Tour or make Level 6, you already get more stuff thrown at you than any average player could ever dream of. I just want to give more players—more people that really do a lot for Magic—a dream of their own.

Understand that this is contentious here at the company, and I can't just wave my hand and make it so. Heck, I might be wrong. People might not want to watch a writer play against the best pros at all and would rather keep it all about those with the best finishes. At least it's worth talking about.

What kind of person would you root for at the Invitational? Who should get to go? Let's hear it in the forums.

With that out of the way, let's get to this week's theme with a couple lists of "old favorites." 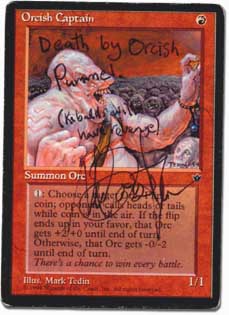 1) Customizing Your Collection. This article is over five years old, but I am still just as much of a dork.

2) Decks with Horsepower. I had to fill in for Ben Bleiweiss as the resident historian for a week, and I was pleased with how this one turned out.

4) A-Proxy-Mation. I used to try to write things that were entertaining. Those were the days.

5) A Fine Vintage. My foray into the world of power. This article includes the poll that would name a format.

6) The Crossest Word of All. My amateurish attempt at a crossword puzzle. This thing is stupid hard.

7) Cards That Will Never Be. Light-hearted goofiness; much of it still makes me chuckle.

8) Ending Block-on-Block Violence. An important piece that showcases a big philosophical change in R&D that I take pride in.

10) The Silver Statuette. This article attempts to give developers their due. Even now as director, I can't stress enough how important development is.

Five "Old Favorite" Decks That Have Given Me Infinite Joy

I dug through my old boxes of decks—at home, at work, and even my virtual boxes of decks online—and unearthed these five beauties. These are examples of what I like to play for fun.

"Townsfolk" used to be a supported creature type. My brother and I built three longboxes full of tribe-based decks back before I got married; we worked on them on and off for a couple years during the time of Tempest and Urza's Saga. The Townsfolk deck was my favorite and I kept playing it, eventually powering it up with a Sol Ring and a few dual lands. I took it to several casual sessions at the Pitt Student Union, and even submitted it to the Auction of the People for the Magic Invitational one year (it wasn't chosen, but was a runner-up).

1 The Lady of the Mountain

The "2" Deck is from another deckbuilding experiment my brother and my roommate engaged in—we had to build decks using only cards that InQuest magazine gave a rating of two stars or fewer out of five. I believe Tempest was the newest set at the time. There are some pretty bad cards in my deck, and it has a distinct lack of power, but several of these cards saw tournament play in one format or another, including Aura of Silence, Brass Man, Striped Bears, the original fetch lands, and my personal favorite Fiery Justice.

I remember my deck being the best of the three we built; my brother's was based on the awesome combo of Caribou Range and Goblin Lyre, and my roommate's deck contained the card Fortified Area in multiples.

4 Survival of the Fittest 1 Aura of Silence

Rickety Town—named after a stage in the upright arcade shooter CarnEvil—was an Extended deck that Mike Turian and I built based on an idea from Andrew Cuneo. At its heart it is a Survival of the Fittest deck with a bunch of counterspells tossed in. Like most decks I enjoy, there's a lot of variety in the list, except in this case you actually need most of it and can find the pieces you want relatively quickly.

I made the Top 4 of the one PTQ I played this deck in. I still remember the game-three semifinal loss—I Force of Willed an early Duress, pitching my only creature to protect my Survival, then proceeded to draw two more Survivals and no creatures before being killed by Hatred. Man, I can't believe I'm telling a bad beat story in my column. Moving on...

This deck was built more recently—after I started working in R&D. Brian Schneider wanted some decks to take to local in-store casual game nights incognito, so I asked him to name cards to build around. His answers were Wild Research and Infernal Genesis. I latched onto the latter deck and have played it several times both against strangers at game stores and other Wizards employees.

This last deck exists only in Magic Online—it is my go-to casual room favorite. The ideal plan is to get Arcum Dagsson into play and slide Lightning Greaves onto him, and then assemble the Akroma's Memorial/Summoning Station death machine. That doesn't always work out, so there are lots of other little things going on. Once in a while Mishra decides to show up, and he can take over a game as well. All in all a lot of fun.

Members of R&D fluctuate between zero and one. Although we've probably tried just about every game out there.

Posted in Latest Developments on August 10, 2007