hen I began as an intern at Wizards of the Coast, Gatecrash was in the last few days of its development. Gatecrash is the final set for the foreseeable future that I will experience for the first time in its final form. It was still being played in the Future Future League, but most of the names were final and only a few minor tweaks happened to the cards after I began. From here on out, it's all remembering playtest names, old abilities, and how cards used to read.

Today, I am a full-time developer, the Gatecrash Prerelease is tomorrow (or as the denizens in the APAC region like to call it, today), and the excitement I used to get from actually playing in the events has been replaced by the excitement of seeing other people experience the set for the first time. Much like in years past, I rushed to Twitter and various Internet forums when the new previews went up each night, excited to see which cards were previewed and how the cards I have been playing with for several months now were perceived by the public at large. As a developer, I do get attached to cards in a set that I either had a hand in creating or just enjoy playing, and it's wonderful to watch people react in similar ways to how I did when I first read them. 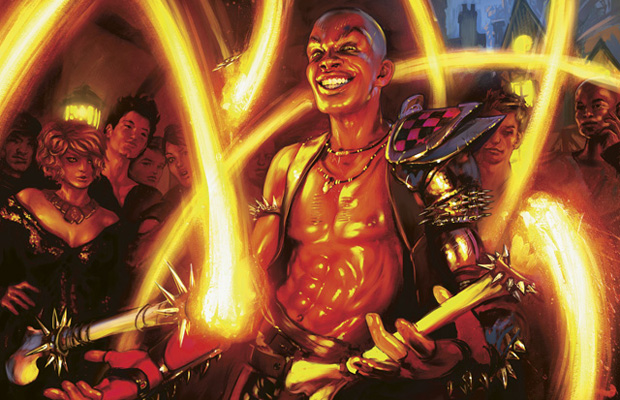 Right now, it's hard for me to separate my first impression of Gatecrash from Return to Ravnica (especially since the first Limited I played with either was full block), but I know that two of my favorite mechanics for Limited are in this set—bloodrush and extort. They are really polar opposites in the kind of Limited decks they encourage, but both play toward the kind of Limited decks I enjoy—ones that sit on the extreme. When I play in the Wizards of the Coast employee Prerelease (which happens after I hand in this article), it will be the first time I've actually played the set by itself, so I am looking forward to seeing if my inclinations on what decks to build will play out as I expect, or if there will be a few curve balls to discover. I, for one, am looking forward to it.

Magic can be a hard game, and simply reading the cards isn't enough to fully understand how good a card or a strategy is. If it were, then my job would be pretty redundant. It's true, though, that things are overall more straightforward than they were in the past. We in R&D have put a lot of work over the last few years into making sure that the powerful cards read as powerful, and that they tend to be cards people would enjoy (you probably won't be seeing a Stasis in Standard any time soon), but playing with them is still by far the best way to understand what is good and what isn't. And that is where the Prerelease comes in—it is the first time you will have the opportunity to play with the cards and get to have the experience of measuring your expectations versus reality. I'm certainly looking forward to reading social media and seeing how this all plays out for people.

First impressions are important—in business, in your personal life, but also for us as a company. We believe that Magic is fun and we want to make sure that everyone who picks up a set for the first time has a good experience. It's by far the best way to ensure they have further experiences. This is part of the progression of New World Order that you have read about countless times in both this column and Mark Rosewater's weekly column. Individual cards should be more resonant, easier to understand, and more enjoyable, but also the individual experiences you have at Magic: The Gathering events should be as well. If you read Aaron Forsythe's end-of-year review of Magic you know that Dave Guskin, one of the other writers of Latest Developments, is now the official experience designer for Magic: The Gathering. Look forward to more new and exciting things from him in the future, some in the vein of Choose a Guild, and some more abstract, but be prepared to let your hair down a bit and have fun.

My first Prerelease was for Weatherlight in May of 1997. Since then, the only Prerelease I missed was for Prophecy. I'm not saying my Prerelease resume is the best in the world (R&D's own Dave Humphreys holds the distinction of not only attending the super-rare Ice Age and Homelands Prereleases, but actually winning the Ice Age one), but I do take pride in it. I've played Magic at all levels of the game, and by far the events I looked forward to the most as a player have always been Prereleases. The most exciting part about Magic for me has always been discovery, and that is something Prereleases have in spades. 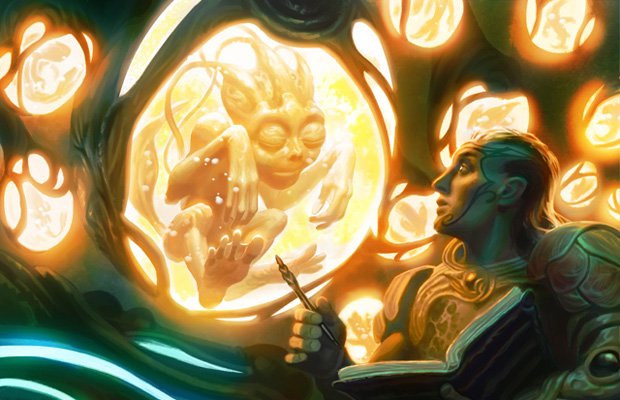 I learned a lot about how things shouldn't be run by attending a midnight Prerelease for Exodus. After opening up a bunch of brand-new and exciting cards, I finished registering the contents of the sealed deck pool and handed them back to the TO so they could be redistributed randomly. After getting back a pool with a few less-exciting cards, again reading the cards I wasn't familiar with, and building a deck, I sat down for the first round and the entire tournament paused for an announcement from the head judge. He called out a list of names of players who should hold their hands up so judges could come by to assess warnings for misregistering the original decklists. And, of course, I was on this list. The head judge then explained that because the pool and the decklist didn't match, the players who received these cards weren't allowed to play, either, and that we very well may have cost these players any chance of winning prizes.

For any new player in the room for that exchange, it was a pretty bad way to be introduced to organized play. A lot of measures were put in place for Prereleases to prevent cheating, but it ended up treating them as upper-level competitive events. Not knowing how the rules worked, not being sure of how to assemble a deck, or just being unfamiliar with tournament procedures ended many a new player's tournament life prematurely. Some of those people learned from their mistakes and kept at it, and some simply never returned to tournament Magic.

I'm happy to say that the views of organized play then and now couldn't be more different. Over the last few years, we at Wizards of the Coast have done a lot to make sure the Prereleases are events that everyone can enjoy and a great place for newer players to experience organized play—often for the first time. We've moved away from treating Prereleases as high-stakes winner-takes-all tournaments. We encourage players to adjust their deck over the course of the day as they discover which cards they enjoy and which they don't.

Festival of the Guild Pack

Gatecrash marks the second time we have used the guild-specific Prerelease kits. The response from players on the Return to Ravnica kits, and being able to choose a guild, has been overwhelmingly positive. There certainly have been criticisms that the Prerelease Sealed is different than the regular Sealed, but I think that's okay. Our goal with the day of the Prerelease is to make sure as many people as possible experience the set in the most fun way possible, which we believe the guild boxes accomplish. You are given a strong rare creature as your Prerelease card, which for only the second time ever you are able to play, and the guild pack will most likely give you enough cards in your guild to ensure you can play it. 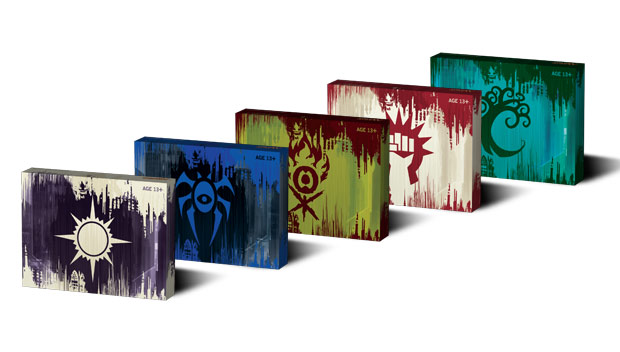 The setup, in general, gives players who are less familiar with the set, or Sealed in general, a solid direction in building a deck that may not be optimal, but is at least not embarrassing. We aren't looking for a way to take away the decision-making process, just bringing desires of what players want to play closer to reality. So, if a player who wants to play Dimir puts all of his or her blue and black cards in a pile, then removes enough to get down to twenty-three spells and seventeen lands, he or she should have something approaching a real deck. Not optimal by any means, but something that will get that player closer to playing an enjoyable game of Magic than if the extra boost from the guild pack didn't exist.

Players also shouldn't need to choose which guild to play simply as a meta-consideration for power. A lot of work went into balancing the guilds against each other and making sure that no one guild has an overwhelming advantage over the others. I can't guarantee that you will open five other rares to go with the guild-aligned one in your Prerelease kit, but no matter what guild you choose, your guild pack should give you the resources to play that guild and a strong enough pool to have a good time.

If you go to a Gatecrash event this weekend, I hope you have fun playing with the set. A lot of people here put an incredible amount of work into it, and I think it is a great follow up to Return to Ravnica. I hope you take a few risks, try out some cards you might not have if you weren't able to switch your deck around, and maybe even help a newer player improve his or her deck. Take some time to just have fun with the Prerelease and enjoy the new cards, and make sure the other people around you do, too.