Posted in Latest Developments on February 8, 2013

irst off, in the interest of full disclosure and humble brags, I'd like to share that I was there for the conception of battalion, or "assault" as we so fondly referred to it then. Back during those passionately thrilling days of Great Designer Search 2, when a small active neighborhood of future game designers worked directly alongside and under the direction of the Top 8 finalists, I got to spend quite a bit of time exploring fellow R&D member Shawn Main's wonderful me chanic.

Here's one of the cards I helped design for Shawn's Perfect Pack challenge:

Wasteland Warlord, Take Two (Credit to metaghost/Billy Moreno)
2RR
Creature—Human Warrior
2/2
Double strike
Assault—Whenever you attack with three or more creatures, if it's the first combat phase, untap all creatures you control. After this phase, you get an additional combat phase.

Notice the pleasing parallel of double strike to double the attack phases, all gently accentuated by the 2/2 stats and distantly echoed by the two colorless and two red mana in the casting cost. A real beauty that bares a faint resemblance to Boros guild leader Aurelia, the Warleader. Unfortunately, any similarity is a trick, a happy coincidence, as I had nothing to do with Magic's newest game-changing legendary Angel. Instead, I was busy designing a lamppost...

Three if by Air

I'm writing this article section-by-section, so I can talk about anything I think is important without figuring out how it fits into an overarching thesis. This section started out as a cute little riff on the famous line from "Paul Revere's Ride" ("one if by air, two if by sea") that happens to line up well with the existence of the aforementioned Aurelia, the Warleader, as well as Firemane Avenger and Daring Skyjek—never mind that the Skyjek only flies sometimes—and would with Skyknight Legionnaire, but it only has 2 power. 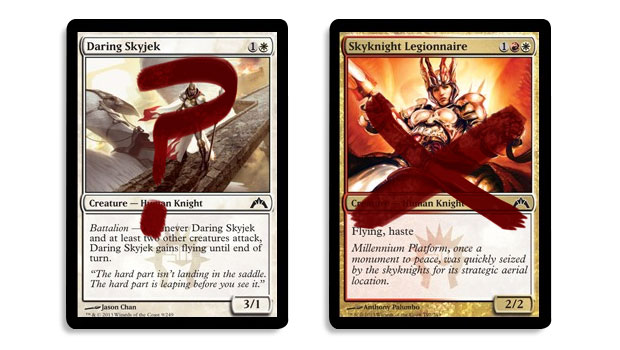 If three, by air


But, while I desperately scrolled the page of Boros cards looking for any excuse to use that admittedly tepid and accidentally secondhand pun, I was reminded of what makes battalion so compelling and successful at conveying the Boros way of life.

A battalion is a military formation (quite literally made up "three or more" companies). A successful battalion is defined by the synergistic interplay between its various subunits, as well as a strategic understanding of how to best use those units to shape and excel on the battlefield. That all applies in a game of Magic as well. Consider the following battlefield: 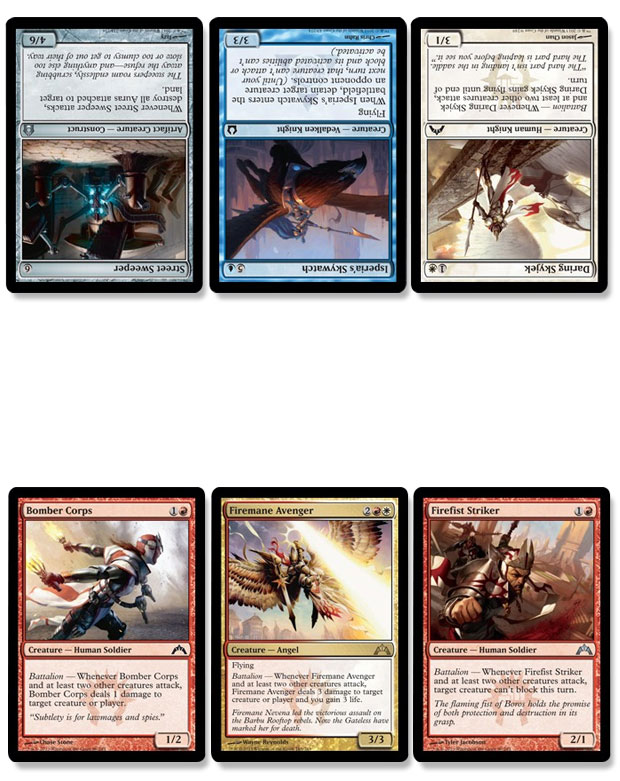 If it's your turn to attack, your opponent is in for a lot of trouble. Two of his or her creatures are going to die to battalion triggers, while the last is rendered a mere spectator. Not to mention the 6-point chunk of combat damage. What happens if that Firefist Striker is a Boros Elite instead?

Well, an active Boros Elite is certainly harder to block effectively than one that is attacking alone. But the mighty Street Sweeper cares not and will quite casually crush that so-called Elite in fair combat. Maybe a suicidal attack by the Soldier is worth it, if the assault takes out two of the defending creatures. On the other hand, maybe you're better off waiting until you can shape a better foray into the red zone.

And what about if the Striker's still a Striker, but now your opponent's Skywatch is a Concordia Pegasus enchanted with Pursuit of Flight? 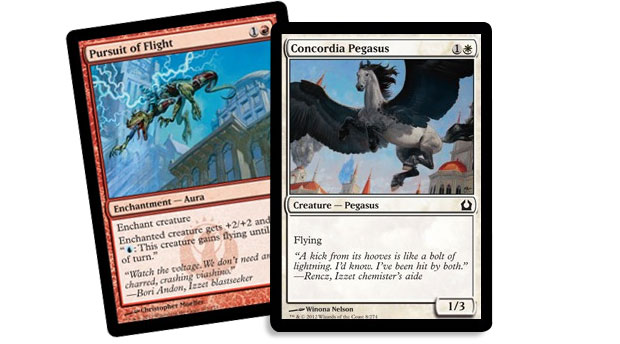 As a flying blocker that doesn't die to the Avenger's "helix" ability, the cobbled-together 3/5 means that an all-out attack will go very poorly for us. We're definitely better off waiting for a more favorable opportunity. The point is, battalion isn't an open invitation to send your whole team into the red zone turn after turn without thinking (if that's what you're looking for, please return for Gruul Week). Survey the field, sculpt a plan, understand your objectives, and work with what you've got.

Fortunately, the development team understood that proper battlefield strategy was what really made battalion tick as a mechanic. Besides the plethora of unique triggers on the Boros guildmembers, each presenting its own personal wrinkle to the shape of battle, we also provided a variety of less- (and more-) obvious tools for the enterprising Planeswalker general.

Most of the time, a battalion-empowered assault is easy to anticipate. Does your opponent have fewer than three creatures? He or she probably isn't attacking before mustering the requisite numbers. As demonstrated above, the situation gets a lot more complicated when battalion is actually assembled, but even then you can see it coming. Of course, if battalion was clunky and clumsy enough to always be predictable, games featuring Boros decks wouldn't be very dramatic or memorable.

Between its red and white components, the Boros guild has quite a few ways to turn on battalion out of nowhere (cleverly hidden in your hand, actually) and to keep every opponent guessing and respectful. Haste is probably the most obvious way to add a surprise attacker to your squad, with Boros members Legion Loyalist, Skyknight Legionnaire, and Spark Trooper all featuring the keyword. Hellraiser Goblin takes more of an "all and everything" approach to haste, while Act of Treason does double duty—providing an extra attacker while massively weakening your opponent's defenses for a short time.

White has a knack for creating instant-speed creatures with abilities like the keyword flash or with token-making spells like Eyes in the Sky. Despite loudly proclaiming itself to be an Orzhov card, Beckon Apparition is secretly one of the sneakiest Boros tools available. Not only can it make a creature at the end of your opponent's turn, long after he or she committed to a foolhardy attack ripe for exploitation, but that Spirit token also has flying, making it particularly effective at accompanying your battalion creatures.

The Tides of War

One of development's goals for battalion and the Boros guild was to make sure games felt dynamic—i.e., if every Boros game felt like an early attempt to build battalion followed by a relentless and largely non-interactive race, we would have failed to deliver the best game play possible. Basically, we thought it was extremely important that different Boros games had different shapes and feel based on the cards involved. The "build-then-battle" games were easy to put together, and those tools were provided early on in the design process. As Mark Rosewater pointed out in his column earlier this week, Boros was given access to an especially aggressive curve so battalion could turn on quickly. And the battalion abilities themselves are impactful enough to be worth triggering most of the time you have a chance to. Under lead developer Dave Humpherys's directional guidance, we uncovered the "ebb and flow" of Boros game play.

Earlier, I showed how much the texture of the red zone could change depending on the creatures in the game. Daring Skyjek, Bomber Corps, Firefist Striker, and Legion Loyalist are all most effective in different situations. Warmind Infantry and Boros Elite seem pretty straightforward, except the Infantry is a lot less concerned with crashing into a random 4/4. What I'm trying to say is, sometimes the Boros player has more than enough creatures to trigger battalion, but still can't assemble a favorable attack. At the proper moments, cards as diverse as Mark for Death and Righteous Charge can temporarily recalibrate the red zone. Fittingly, the guild gets its best tools in this regard from its own personal arsenal.

When you're attacking with at least three creatures, and you're opponent's blocking with who knows how many, Martial Glory provides enough tactical options to tickle the grizzliest field general. The +0/+3 half can clearly protect one of your attackers for future forays, but even the +3/+0 part of the card can be offensively defensive when combined with Boros stalwarts like Wojek Halberdiers and Ordruun Veteran. When it comes to protecting your army of attackers, Boros Charm is a little blunter, granting the indestructibility to your entire team.

No guild is, as they say, an Island... I mean, an island. Although, now I'm kinda curious what it would look like if there was a guild that was an Island. Anyway, a major part of developing Gatecrash (and Return to Ravnica before it) was making sure each guild had satisfying interactions with its neighbor guilds. Boros shares red with Gruul and white with Orzhov, and I'm happy to tell you it gets along with its neighbors just fine.

Cousins from the Gruul side of the family tree showed up to the septennial picnic with a healthy heaping of bloodrush, the mechanic that lets creatures serve as attack-only combat tricks. Sometimes your Boros deck just needs to build up its squad of attackers, in which case, Skinbrand Goblin is happy to slip right into your curve and join the fray. Other times, an impressive creature like Viashino Shanktail is more useful protecting one of your attackers. But just as often, power-heavy hitters like Scorchwalker and Wrecking Ogre will find their way to one of your unblocked creatures in order to put a serious dent in your opponent's life total. After all, when you're always attacking with "three or more creatures," your opponent will be hard-pressed to block all of them.

With higher power than toughness, red bloodrush cards are often better at pushing through damage than protecting your attackers.

We tried not inviting the Orzhov cousins to the family gathering, but it turns out everyone was in debt to them and an invitation was part of the interest rate. Extort is a pretty perfect Orzhov mechanic, neatly capturing its modus operandi—"Please let me offer you a deal you won't like. You're welcome. I look forward to doing business again." While no true member of the Legion would ever be caught with his or her hand in the till, I'm certain you can find a way to use the extort mechanic legally and responsibly while investigating your opponent's face. For instance, Boros decks often find themselves taking a turn off here and there to rebuild their battalion forces. In the meanwhile, Knight of Obligation and Syndic of Tithes can help maintain pressure on the mark... I mean suspect. The Knight, in particular, is most effective when it's attacking and is tough enough to be part of a full battalion, turn after turn. Blind Obedience adds a little more extort-fueled reach to your deck but does an even better job hampering your opponent's ability to defend himself or herself. With every creature entering the battlefield tapped, your opponent's defenders will always show up to the fray a turn late.

Overall, the development team (which I was not on) did a great job delivering on the unique appeal of the Boros guild. Even though radiance (from the original Ravnica block) wasn't the most successful mechanic, being both fiddly and underpowered, it demonstrated a love of order on the battlefield and an appreciation of well-thought-out formations. This time, the function is equal to the form, with battalion rewarding careful planning and prudent management of your highly valuable troops. The set is littered with less-than-obvious cards the crafty general can use to win the day, if only he or she recognizes the opportunity.

Posted in Latest Developments on February 8, 2013