Posted in Latest Developments on May 6, 2005

Monday here on magicthegathering.com will be the card previews for the final set in the Kamigawa block, Saviors of Kamigawa. We shall be leaving Ninja and Genju behind for a while and embracing whatever wild, weird, and new nasties Saviors has to offer.

Mark Rosewater will be going over the Saviors design team in his article on Monday, so I figured I'd one-up him and introduce the development team first! (That way I can concentrate on the really important thing next week… the card preview!)

Saviors' dev team may be the most eclectic I've seen in my years here at Wizards. Here they are:

Randy Buehler (Lead) – You all know who Randy is: the former Pro Tour winner that came to Wizards and helped rejuvenate Magic. Once upon a time, Randy was Magic's Lead Developer. The he got a promotion to Director of Magic R&D, and later passed the Lead Developer title on to Brian Schneider. I believe Saviors development occurred during that period after he was promoted but before he stopped acting as the brand's overall development lead.

Brian Schneider – Brian is the current force behind Magic development (not me… I'm just the sucker who has to write the articles every week). No cards go out the door without Brian's stamp of approval. Not a one. He can argue down Buehler, Rosewater, and Bill Rose to get the cards he wants made (although not all at once… probably not, anyway). For most of Saviors development, though, he was just one of the guys, letting Randy steer the ship. In fact, for this set Brian was the “design team rep” on the development team, meaning he was the one person who was on both teams with the responsibility to ensure design's vision wasn't lost on the developers.

Worth Wollpert – Before working at Wizards, Worth was a Pro Tour fixture and has a resume that includes a Top 4 at PTLA 1999. He was a core member of “Team Deadguy” (whose roster included Chris Pikula, David Price, and Tony Tsai), the pro team most likely to wear white cowboy hats in the Pro Tour's outlaw-filled early days. Worth came to Wizards primarily to work on our sports games (such as MLB Showdown), but his love of and skill at Magic keep him involved on this side as well. Most recently, Worth was on the Scourge design team and Fifth Dawn development team.

Mons Johnson – What do you get when you've known Richard Garfield since the late 70's? One, you get your name immortalized on a Magic card, as Mons did with Mons's Goblin Raiders. Two, you get a good connection for a job at Wizards of the Coast. Mons was a ten-year veteran of the military (a career which included lengthy stays in Germany and Korea) when he put down his marksman's rifle and picked up the dice and cards, taking a position here at Wizards at Richard's behest. Mons left the company for a while, and actually qualified for the Pro Tour during his hiatus. He eventually returned to the company as a developer, and now works on a slew of games including Magic, Duel Masters, D&D Miniatures and some secret games I can't talk about (let's just say his previous career is coming in handy).

Justin Webb – You probably haven't read Justin's name in this column before, mostly because he's not a traditional developer (meaning one of us lucky few that spend most of our days actually playing games). Justin is one of Magic's editors, and he was put on the team as a form of on-the-job training. Justin hails from London originally, where he ran a small technical publishing company that edited and typeset math and physics journals. Growing bored with that, he came to the States and eventually ended up running a Wizards of the Coast retail store in Atlanta, a venture he was successful in, claiming, “It's very easy to sell stuff to people here if you have an English accent.” While running the store, he became enamored with Magic, and leapt at the chance to work on the game directly here in Washington.

It's the first time that many of these guys worked together as a team, but the results were great! I enjoy Saviors a great deal… probably more than Betrayers! Hats off to the design team as well.

Remember, the Saviors prerelease is only two weeks away… 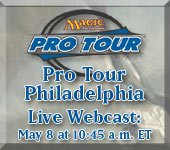 The event that is not weeks away but merely hours (or has already started, depending on when you're reading this) is Pro Tour—Philadelphia. This event is significant for several reasons, most of which involve our ongoing attempts to reinvigorate the Pro Tour as a whole.

The big change for this event is the payout structure we're trying out for this event, which was modeled after the “Skins Game” that is so popular in professional golf. The idea is that there is money at stake on each round, so even if you go just 1-3 before getting eliminated, you'll still walk away with a small prize. The real excitement comes in the later rounds as the field slowly diminishes; each match near the end of Day 2 will be worth $1000 or more!

Another big PT change was announced earlier this week by Randy—the formation of the Player's Club. Similar to how the Philly payout spreads the winnings around a bit more, the Player's Club attempts to better subsidize what we like to call the “Pro Tour Lifestyle.” Playing Magic professionally can get expensive, but our new plan makes it much more realistic… if you're good enough, you can even get airfare and hotel rooms paid for by Wizards!

Chris Galvin, the VP of Organized Play, has long been working on making the Pro Tour even more special. I'm proud to say that I'm part of his committee for doing so, along with Scott Larabee, Randy, and many other talented individuals. The fruits of our labors so far have included the Players' Lounge, the Player's Club, and the Philly payout. The thing I'm personally most excited about regarding the Pro Tour won't be revealed until around the time the Ravnica: City of Guilds set is released, but needless to say, there's more goodness on the way.

Why do we pay so much attention to the Pro Tour? Even if you as a player have no interest in it, it is the glue that holds a lot of the community together. The PT is the centerpiece of our entire Organized Play program, which includes Grand Prix, PTQs, and even prereleases and Friday Night Magic. The robust tournament scene helps maintain the value of your cards, and in a way adds a real sense of legitimacy to Magic as a hobby.

Even if you aren't a Pro player, or even an aspiring one, you can stay involved by following our coverage of the event here.

Finally, I want to address something—or someone—that has been showing up in my message board threads for the past several weeks. A fellow by the name of Don the Mage has been repeatedly prodding me to answer his question “Why was Trinisphere restricted in Vintage and not Mishra's Workshop?”

To honor his tenacity and good humor, I'll actually answer that question. My only caveat is that I don't want other people spamming the daylights out of my threads any more with off-topic stuff. It does little but derail the conversation at hand. This is a one-time request. If you want answers, try “Ask Wizards” or the email link at the bottom of my articles (which I'm sure Don did). Granted, neither is a sure-fire way of getting a reply; I'll be honest, there is no sure-fire way. We get tons of email around here; we address the big popular concerns in articles, and the little concerns when and where we can.

Why not the Workshop? In essence, I believe the DCI and a significant portion of the Vintage community like what it does. Yes, it is crazy powerful, but that is what the format is about. It allows a whole swath of cards that might otherwise be unplayable exist in the tournament environment. In a way, it helps define the format as one where crazy things happen.

We knew Mirrodin block was going to super-charge the power level of the Workshop, but we wanted to see what happened before we did anything rash. After the entire block had hit the streets and the dust settled, what were the real problems? There were over 180 artifacts that cost 3 or more released in that block, and if all but one or two of them were okay, why not just take care of those and leave the Workshop alone? Trinisphere was a problem in our eyes (and arguably not even a big problem if you listen to the players), so we restricted it. Crucible of Worlds may eventually reach that status as well, but certainly not yet. And that's about it, really. Yes, the card powers out Juggernauts and Smokestacks, but this is a format built around Moxes, Black Lotus, Sol Ring, and Dark Ritual. It isn't that far off the “norm.”

Personally, I don't buy the argument that Workshop is keeping more expensive colored creatures (like, say, Juzam Djinn) out of the environment. The format as a whole has passed those cards by. You can play creatures, but merely being efficient is not enough anymore. You need your creatures to be able to win the game on their own, like Psychatog, Goblin Welder, or Akroma.

Lastly, will the continued allowance of four Workshops hurt future design? Not a bit. We have lots of formats to worry about, and we've already shown that we're willing to restrict cards in Vintage that haven't proven problematic in any other format. So if, down the road, we want to make another expensive artifact that is only ridiculous in Vintage, I'm sure we'll print it and then discuss restricting it.

Or maybe we'd re-restrict the Workshop. Anything is fair game. Just not any time soon, that's for sure.

Posted in Latest Developments on May 6, 2005