Time Spiral design, Brian Tinsman (who has just recently returned to Wizards of the Coast, hurrah!) led his team, of which I was a member, through an exercise in which we tried to come up with ways to represent various aspects of normal Magic through the lenses of past, present, and future that would be the themes of each of the block's three sets. For instance, we divvied up existing keyword into three groups: mechanics that involved replaying spells that you played earlier in the game, like flashback and buyback, were lumped into the "past" grouping, and many of those appear in Time Spiral. Mechanics that present forks in the road when played, like split cards, and entwine, were lumped into the "alternate present" grouping, as you could choose from divergent "realities" when deciding how to use the card. Some split cards ended up in Planar Chaos along with vanishing, a keyword that creates creatures so short-lived as to exist only in the "present." Mechanics that dealt with the next few turns of the game, like scry, we slated for Future Sight; and I hope you're as happy as I am that scry is in fact returning. 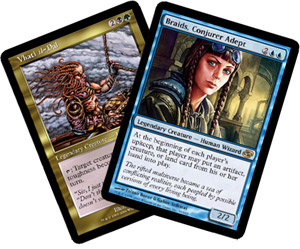 Legends were another subset of cards we shone through the triple time-lens. For "past legends," we talked about making young versions of existing legends, like "First Mate Sisay" or "Kamahl as a Young Boy," or making ancestors of existing legends, like "Squee's Grandma" or something like that. Luckily we settled on bringing back old legends intact in the Time Spiral "timeshifted" set (like Akroma, Angel of Wrath and Vhati il-Dal) and making cards for well-known characters from Magic's past (like Teferi, Mage of Zhalfir and Lim-Dul the Necromancer). Our ideas for present mostly revolved around "alternate reality" versions of existing characters, and that's exactly what Planar Chaos delivers with Braids, Conjurer Adept and Mirri the Cursed. Our ideas for "future" legends bounced between futuristic versions of existing characters, like "Old Man Gerrard" or "Karn Reformed," and "descendants" of popular legends, like the children of Tibor and Lumia or some distant great-great-grandnephew of Rasputin Dreamweaver.

I don't think the design file for Future Sight was handed off with any kind of futuristic legend cards (although Mark may prove me wrong; I don't have a copy of that handoff file), probably because there was no way to justify them being timeshifted from the future based solely on flavor. They'd need some kind of never-before-seen mechanical angle.

Luckily, VP Bill Rose had an idea that would give the development team that mechanic they needed.

If you've been reading my column lately, the weeks in between my personal epic have been filled with discussions on mechanics that are strict drawbacks and the good and bad things that come with them. The legendary supertype, for those still blinded by its flavor impact, is a pure drawback mechanically—there can be only one copy of a given legendary card in play at a time.

I've talked about legends and the problems they pose from a deckbuilding and ultimately collecting standpoint in my article Preserving the Coolness of Legends, so I'm not going to go into all the back-and-forth about why we continue to do cards of that classification and why we shouldn't. But they are difficult to get right.

I still believe that there are a large number of players that collect multiple copies of just about every card they enjoy or need to make decks, if not every card we print, and the number of copies of legendary cards that they feel compelled to own is lower than the number of copies of equivalent non-legendary cards. I really wish that wasn't true, as the legend cards tend to be some of the more splashy and focused-upon cards in any given set; shouldn't they also be amongst the most desirable?

Bill's suggestion changed the equation. "What if," he asked, "legendary creatures had an ability that let you discard extra copies of themselves for an ability?" It was a fantastic idea—suddenly playing four copies of a legend in a deck went from suboptimal to optimal. While his change didn't remove the drawback of being legendary (you still can't have two in play), it certainly mitigated it.

I believe Bill's plan was to save the mechanic for the next time we did a block with a big legendary theme, but Future Sight lead developer Mike Turian was very excited about working it into the set as a cycle of "futureshifted" cards, as was I, as were several other designers and developers. So we went about creating five cards with the mechanic.

Designing them was fun and pretty easy as design tasks go. You start with a base body that is derivative of a popular legend from Magic that isn't dead in the storyline and therefore theoretically capable of having offspring. Then you think of the exact thing the card would need to make it as over-the-top good as it could be and make that the ability you get by discarding another copy of itself—what we called the "legendary force" abilities while we were working on the set. The "legendary force" abilities are all free to play from a mana standpoint; the real cost is finding and ditching another copy of the card, which statistically won't happen enough on a game-by-game basis for us to need to control it with less aggressive costing. Of course, there are always ways to manipulate how many copies of a card you draw and how often, and that's half (if not more) of the fun.

Let's look at a concrete example. This particular guy isn't one of the two I designed, but he is a savage beating and really does his "daddy" justice. So we start with a body reminiscent of an old favorite... let's pick Onslaught's constructed powerhouse Dragon Rorix Bladewing. Rorix was a

6/5 flyer with haste, so his offspring should look similar but be a tad cheaper and smaller (being the kid and all). So we'll go with

4/3 flying haste. Then we figure out what this guy wants to do most—I think that, being smaller than dear old dad, Li'l Rorix dreams of hitting for more damage than Big Rorix does, perhaps by essentially doubling in size. So we'll throw on a "legendary force" ability that mimics doubling the little guy's size and, Voila! :

Seething Song looks pretty attractive... one hit on turn three for 4 damage, a second hit on turn four discarding two more copies of itself (nice draw, what can I say) for 16 seals the deal. Yeah, that second activation takes him from an 8/7 to a 16/15. BAM!

"Legendary force," as you can all see, was shortened to "grandeur," an ability word that speaks to the legendary status of the creatures that bear it.

Make sure you head to the Prerelease to check these guys out... maybe you'll find yourself trading for four copies of a legend. And the giveaway card for just attending one of these events is in fact a "grandeur" card, the powerful descendant of a famous old-timer from the Legends expansion. So be there!

I forgot dice, which annoys me greatly as I use dice myself as tokens quite often. So I'm re-asking the question. Bear with me.