when I first posted vague playtest cards in an article last month? Wasn’t that great? One of them, you may recall, was called simply “HAT.” 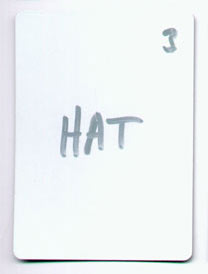 Several of you speculated on the boards as to what it could be. “It’s equipment…. DUH!!” you said, or, “It’s obviously Helm of Kaldra” (like we’d ever make a card called that). My favorite comment was, “It’s probably a remake of Jester’s Sombrero, but less Mexican.” At least it would have been my favorite, had anyone actually posted that. What’s wrong with you people?

I‘ll tell you what’s wrong: all your guesses. Here’s the scoop…

So there we were--the Fifth Dawn design team, swappin’ yarns and designing cards over email. Mark Rosewater had asked each of us to make a list of the types of artifacts that we enjoyed that were so far underrepresented in the Mirrodin block. I made my list, but what was on my list isn’t important to today’s story. One item Randy Buehler included on his list really caught my eye:

I agreed. Those kinds of cards can be cool if done right. And they were certainly underrepresented in Mirrodin; there were three, and I didn’t like two of them. (Nightmare Lash felt fine, but I found Proteus Staff and Leonin Sun Standard to be a little jarring. I guess it was the mana symbols in the text box, taunting me that I couldn’t activate their abilities unless I was playing the right colors. For some reason Nightmare Lash and its ilk, like Gauntlet of Might, don’t bother me because they’re a little more subtle, and the door is open for shenanigans with Mind Bend or other such cards. But with stuff like Leonin Sun Standard, it’s basically white mana or bust. Obviously other people liked them, and that’s fine by me. I am but one man. I guess I‘d feel a little safer speaking my mind if those cards were from, like, six years ago, because chances are that whoever designed them will be at my desk in the morning, tapping me on the shoulder…)

So how to make another card that fit in my own irrationally narrow band of acceptability for an unabashedly single color powerhouse? Copy any old card, that’s how:

Artifact
Green creatures get +1/+1.
Whenever a player taps a Forest for mana, add

to his or her mana pool.

Those effects seem green, right? And all the old-schooler’s love Gauntlet of Might! Yeah!

They love it so much that we made Mirari’s Wake a couple years ago. My card was a poor man’s version of Mirari’s Wake. A knockoff that looked like an even worse knockoff.

(That there is my faaaavorite emoticon. It says so much. Yet MSN Messenger doesn’t recognize it. :/ )

I’m glad I didn’t submit that one to the team--my design career would have been short-lived. Back to the drawing board! What other unrepeatable old goodies could I improve upon? What ancient card have I never touched, yet long to play with in some capacity?

Singing Tree! I got to work on an update of that old gem, but then I remembered a similar card, Legends’ Horn of Deafening. Hmmm… Apparently Magic designers of old were just as clever and creative as I am. So no artifact Singing Tree for me. And this paragraph is a bunch of made-up junk. 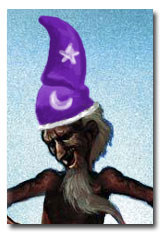 But seriously, folks… One long forgotten beauty that I have never had the pleasure of summoning is Arabian Nights’ Old Man of the Sea. Scalable creature theft? Sign me up! But I don’t want any of this “summoning sickness” nonsense that the Old Man suffers from… I want to steal stuff right away! And I don’t want to have to play Ashnod’s Battle Gear or whatever people used back in the ‘70’s to pump up Old Man’s power; I want my lands to do it for me! So I made…

Artifact
You may choose not to untap CARDNAME during your untap step.

A fine homage! I even kept a similar name so that the delightful Hemingway reference remained intact. :/

As we playtested the card in both limited and constructed formats, it was met with the same universal reaction: “What the heck is that $%&!? Change that stupid thing!” Awesome!

Even though the card was complained about up and down for months, lead developer Brian Schneider and the rest of his team were surprisingly lenient with it. They kept the cost and ability text the same and simply added a reasonable activation cost. It ended up getting a real name--Vedalken Shackles--and it looks like this: 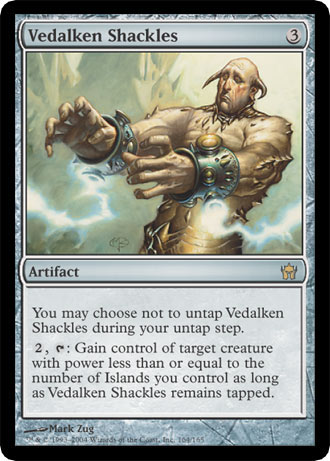 It Doesn’t Go in Ravager Affinity, Goblin Bidding, or TwelvePost, So How Good Can It Be? :/

One of the environmental factors that let this card be printed with these numbers on it is the scarcity of Islands in most constructed formats. (Imagine if this thing had shown up in Exodus like this… Yikes!) I believe there were five whole Islands in all of the Day 2 decks combined at Pro Tour - Kobe. Similarly, blue in Standard is currently provided by Seat of the Synod far more often than by its basic analog.

In many ways blue is at a low point, so this is an interesting time for such a card to show up. Stealing creatures could be difficult right now in Standard, as most of them can be sacrificed for

I apologize to those of you that feel you were put in an awkward position by last week’s question. Sometimes when I ask a question it’s because I (or someone else in R&D) wants to get the public’s pulse on a certain issue. Other times, I just like to present a mental exercise just to gauge how my audience as a whole thinks. Of course we aren’t planning to get rid of a color. But the question gave you no outs if you wanted to answer it--you had to pick one. I learned a good deal from the confused and angry emails I got (and the low participation), so I’ll try to phrase my questions a little better in the future. (I imagine this would have gone more smoothly had I asked, “If you were forced to eliminate a color, which would you choose?”)

Here’s another weird question. Are we polling you for any real reason this time? I’m not telling. :/