How to Kill What Can't Die

he persist ability is a powerful way to trump creature removal spells. If your opponents are killing all your creatures with Terror and Nameless Inversion, you can start playing a persist creature like Kitchen Finks or Safehold Elite instead, forcing your opponent to spend two kill spells on each of your persist guys instead of one. Since it can be annoying to have all your guys killed by Terror and Nameless Inversion all the time, persist being a good "answer" to those kill spells can be a welcome relief.

But as I wrote eight weeks ago, "Answers Need Answers," which for persist means that it's important to R&D to have a variety of ways to get persist guys off the board for good, without having those creatures always return to play a second time. After all, if persist is getting played a lot in your playgroup or local metagame, eventually it can be annoying to have all the creatures persisting back into play all the time and never staying dead.

In that article I focused mostly on Shadowmoor block's wither and -1/-1 counters as answers to persist, as well as white answers like Oblivion Ring and Condemn. Now Eventide adds a new answer to persist and other graveyard recursion with a hybrid instant you can play in white decks, black decks, or white-black decks: Unmake. 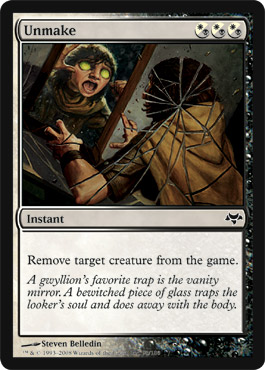 Of course there was. When Unmake is Prereleased into the public tomorrow, it will become a part of Magic's vast, shifting sea of creature removal spells and join a long, time-honored tradition of blowing stuff up. But it won't instantly replace all the creature removal spells in every deck and make persist useless. Not even close.

Magic is all about making your own choices. Some people will choose the anti-persist, anti-indestructible technology of Unmake. Others will choose Nameless Inversion for the synergy of its having all creature types. Others will choose Shriekmaw for its potential card advantage and evoke tricks. Others will choose Terror for its low mana cost and instant speed. Others will choose Gloomlance or Fodder Launch or Torture or Weed Strangle for their various benefits. Unmake will just become another paint on the palette and another gun in the armory.

The answer is no, and it's interesting to look at the specific cards in question to see why.

Unmake is better than Terror in several ways:

But Terror is better than Unmake in two crucial ways:

So which card is strictly better? Which card is escalating the overall power level? Neither one, really. And in a way both escalate the power level, by allowing players new options they would not have had if only one of those spells existed. Which spell is better for your deck? It depends on the situation, and it's up to you.

If you're fighting Ashling the Extinguisher or Twilight Shepherd, you'll really wish you had Unmake. When you're staring down a horde of one-mana Elves or Merfolk on your second turn, it seems really obvious that you'll wish you had Terror.

Moving Removal to the Stadium-Seating Widescreen

Terror and Unmake are all well and good where one-for-one spot removal is concerned. But sometimes you need more cinematic, massive, Michael Bay–style explosions—the kind that smash four of your opponent's creatures at once. Like Wrath of God and Damnation. Last week I described a scene where Damnation didn't quite "destroy all creatures" like it claims:

Say your team consists of a 3/2 Kitchen Finks, a 2/2 Restless Apparition, and a 5/5 Twilight Shepherd. You play Light from Within and attack with a 5/4, a 5/5, and an 8/8 for 18 damage. Your opponent plays Damnation. You shrug, untap, and swing in for 15 more damage, as calmly as if that's always what you do when you get Damnationed.

So what is a good Wrath of God effect that prevents creatures from recurring from the graveyard? One obvious answer is reprinting Final Judgment from Champions of Kamigawa, and we definitely considered that. There is a long history of six-mana block Wrath of Gods in expert-level sets, and they play well: Akroma's Vengeance, Austere Command, Catastrophe, and Kirtar's Wrath. And who could forget Guan Yu's 1,000-Li March? But in the end, we decided to go with something powerful with a lower mana cost for Eventide:

The original Wrath of God says, in Oracle, "Destroy all creatures. They can't be regenerated." In the context of Alpha, the anti-regeneration clause said "No getting out of it. The Wrath of God cannot be withstood." But over years of Magic sets, while Wrath of God remained the same, some creatures entered the scene that are actually pretty good at withstanding that divine fury.

Indestructible creatures like Darksteel Colossus and Eventide's legendary Sapling of Colfenor just grin and take it. "Put into a graveyard" triggers like Yosei, the Morning Star or Kokusho, the Evening Star punish you for daring to challenge the might of Kamigawa's legendary dragons. Persist creatures like Twilight Shepherd come right back into play and smash you. When you wrath your opponent's Reveillark, Mulldrifter, and Avalanche Riders when he or she has an empty graveyard, Mulldrifter and Avalanche Riders pop back into play to bury you in a sea of "comes into play" triggers.

But, perhaps contrary to intuition, putting your opponent's creatures on the bottom of the library often gets rid of them far more permanently than actually killing them. Beyond the original Wrath of God's old-school "bury all creatures" wording, this new "Burial" effect goes beyond Wrath of God to make its victims deader than dead. When you play Hallowed Burial, your opponent's Darksteel Colossus and Sapling of Colfenor just go away. The Kamigawa Dragons don't trigger. They just go away. Twilight Shepherd and other persist creatures don't come back. They just go away. If your opponent has an empty graveyard, and has Reveillark, Mulldrifter, and Avalanche Riders in play, your Hallowed Burial makes all of them... just go away.

Hallowed Burial isn't strictly better than Final Judgment, since the creatures you put on the bottom of the library could eventually be shuffled higher in the library with some shuffle effect, then redrawn again. Or they could be tutored for again with something like Primal Command. But if those shuffle effects don't happen, the victims of Hallowed Burial are going to be hanging out down there on the bottom of the library for an awfully long time.

Just tell them you'll see them in a good forty-five turns or so.

It's interesting that in playgroups or metagames where Hallowed Burial displaces some number of Wrath of Gods or Damnations in decklists, the change makes life harder on the returning-from-graveyard creatures, but the higher mana cost of Hallowed Burial actually makes life easier on the non-returning-from-graveyard creatures like Ohran Viper. Instead of Ohran Viper having to worry about a Wrath of God effect coming down for four mana, it instead has to fight against a Hallowed Burial that comes down for five mana.

Some dedicated Wrath of God-lovers could play 4 Wrath of Godand 4 Damnationand 4 Hallowed Burial, which would make Ohran Viper's life awfully hard. But across the time that Damnation and Wrath of God have been legal so far, people have not often chosen to play eight four-mana-and-up sorcery Wrath of God effects in the same deck, let alone twelve of them.

If Figure of Destiny had been shown before I ran this poll, I wonder if it would have rallied more support for red-white? I'll try to ask this poll again after Eventide is out for a while, to see how the experience of playing with the Eventide cards and seeing the whole set changes the results!