Posted in Latest Developments on April 24, 2009

lara Reborn is the first Magic set to contain only multicolored cards. Historically speaking, gold cards in gold frames have mana costs like

that include two different colors of mana. However, Alara Reborn contains many cards with hybrid mana in their mana costs. Today I'll talk about why we chose to include those cards.

The story of hybrid gold starts in early Alara Reborn design. The team knew from the beginning that every card in the set would be multicolored and that that would create various challenges. Mark Rosewater talked about some of them on the first day of Alara Reborn previews, but the team encountered many others. When the team sketched out the first skeleton of the set, they got worried that even though all the cards in the set would be awesome, many players wouldn't find enough cards that were compelling to them in an average pack. Let's imagine Bob, a Magic player who has a favorite red-green deck. When Bob opens a pack of Tenth Edition, he expects a little less than one fifth of the cards in each pack to be from each color, and thus he expects a little less than two fifths of the cards in that pack into his green-red deck.

Pretend for a moment that Alara Reborn had only allied-color two-color gold cards in it, and that one fifth of the cards came from each allied color combination. When Bob opens a pack of Alara Reborn, only one fifth of the cards in that pack fit into his deck. This is a significant drop in playable cards for Bob. The assumption that only two-color allied cards would be in Alara Reborn is also unrealistic. The third set of the Shards of Alara block needed to continue the block's themes, and that meant plenty of three-color cards and a splash of enemy-color cards. This means that less than one fifth of an Alara Reborn pack would be playable in Bob's deck. The design team felt that this situation was untenable and that players like Bob should get plenty of cards he can put in their decks out of their packs.

The design team encountered a related problem in early Limited playtests. Shards of Alara block Limited decks often contain three allied colors. Therefore, monocolored cards of three different colors fit into them, but only two allied-color combinations of mana costs fit in. Over half of a Tenth Edition pack might fit into their deck, but Alara Reborn's had no monocolored cards to offer. This meant that the design team simply had fewer cards in their colors from Alara Reborn in their Sealed Deck pools than they were used to having, and that was not a positive experience. They wanted to play more new cards, and the set's hook was keeping them from doing that.

The Alara Reborn design team decided that this was a problem that they needed to solve, and they came up with a strange-looking solution to it: hybrid mana costs. One example of this is Jund Hackblade from the Visual Spoiler. 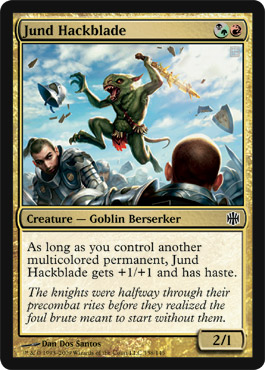 Take a look at that mana cost.

Jund Hackblade has all the markings of a Shards of Alara block Jund-flavored card. Its mana cost includes all three of black, red, and green. However, it doesn't require all three of those at once. Thanks to the black-green hybrid mana symbol, you can pay either

for Jund Hackblade. Every hybrid gold card in Alara Reborn follows this model: one normal colored mana symbol from a central color, and one hybrid mana symbol that includes the two colors that ally with the central color. This means that they play like they are two different allied-color combinations simultaneously while still being aligned with a shard.

Jund Hackblade is one of a cycle of hybrid gold two-mana creatures. Let me show you another one that also happens to be my preview card today. 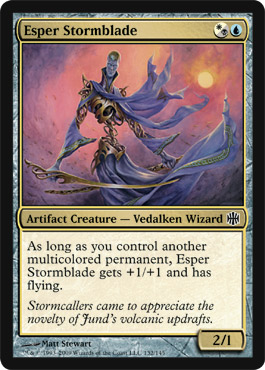 to play. However, Esper Stormblade is also a colored artifact, which is one of the calling cards of Esper and allows for tons of profitable interactions with Esper cards. It makes your Court Homunculus bigger, you can return it to your hand with Sanctum Gargoyle, and it also interacts with the other common Esper-aligned hybrid gold card. Finally, it gains flying when paired with another multicolored permanent, which synergizes well with Esper's other flying beaters. 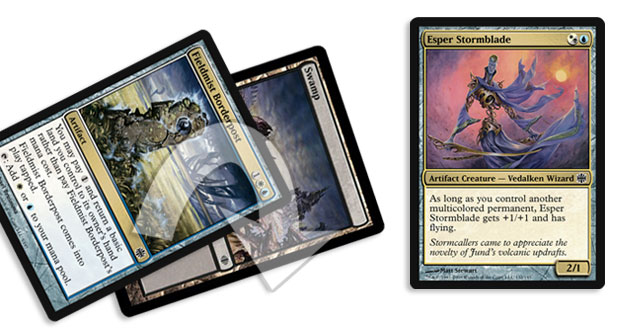 One fun thing to note about the cycle of hybrid gold two-mana creatures is that they synergize perfectly with Alara Reborn's Borderposts. You can play a Firewild Borderpost on turn one using its alternate play cost, then a hasty 3/2 Jund Hackblade on turn two and attack for three. Starting with Fieldmist Borderpost into Esper Stormblade is even more exciting because Fieldmist Borderpost is an artifact, which helps the many artifact-matters cards that you are sure to have running around in your Esper deck, like Master of Etherium or Filigree Angel. 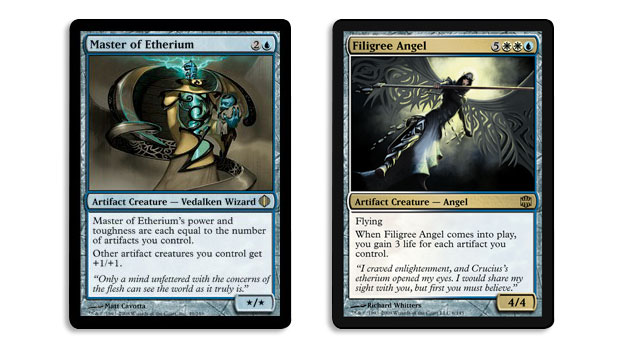 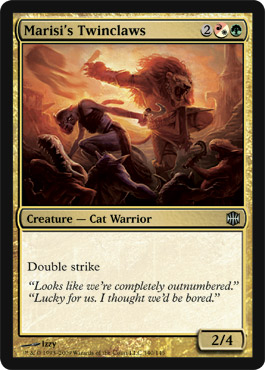 Marisi's Twinclaws is a great example of a simple implementation of hybrid gold. Let's dive into the Multiverse comments.

Marisi's Twinclaws began life exactly as printed, except without a name. It was also a Treefolk Knight, which is a hilarious creature type combination that caused me to draw trees holding swords and shields on every playtest copy of the card that I interacted with. It is, however, obvious that this card works with the color pie. Both white and red get double strike, and that is the perfect addition to a bizarrely green-feeling 2/4 body that is reminiscent of green's many Spiders. Double strike also invites you to cast Griffin Guide or Moldervine Cloak on it and create a monster. Marisi's Twinclaws is simple and fun, and despite being a collection of bizarre elements feels right as a unit.

Other hybrid gold cards were more challenging to design. Here is an example of a more complicated hybrid gold design that also happens to be my second preview card today. 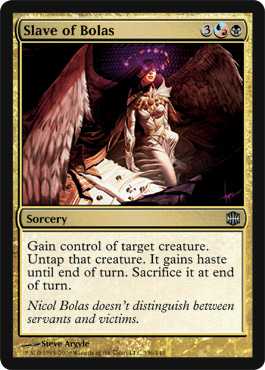 Once again, let's start with the Multiverse comments

AF (Aaron Forsythe) 4/25: Moved from rare to HC. I like how well the bizarre colors actually work here.
DG (Dave Guskin) 8/13: Still a little concerned that despite this being B-centered gold hybrid, there's not much B about the mechanics. Concept helps, but maybe up cost and add life gain factor? (see Spinal Embrace from INV)
AJ (Alexis Janson) 8/14: Like as is, the sac is the black part to me.
TML (Tom LaPille) 8/15: Agree with AJ. This card works for me.

This card is a strange combination of abilities. The ability to temporarily steal creatures began in blue with Ray of Command, but currently has a home in red with cards like Threaten. This made it a reasonable fit for the red-blue hybrid part of the card. The black part, of course, is the part where you kill the opponent's creature once you are done using it for your own ends. As I said in the comments above while I was working on the set, I find this card to be an extremely aesthetically pleasing design. 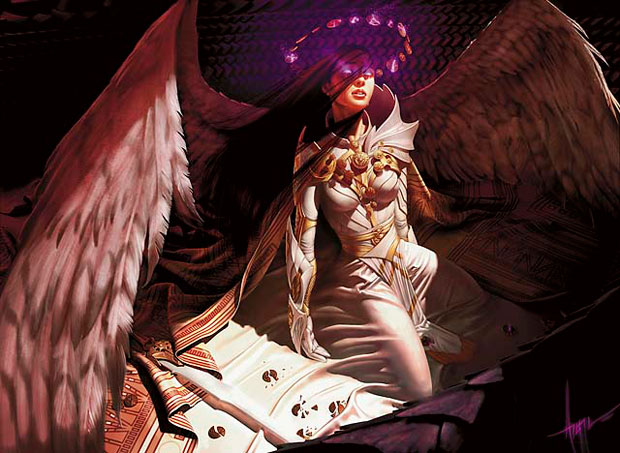 Slave of Bolas is also extremely fun in play. I played in the Wizards employee Prerelease on Wednesday, and I had the good fortune to open two copies of Slave of Bolas for my green-black-red deck. I only had time to play one match, and in that match the best thing I got to take with one was a Mosstodon. However, I saw Slave of Bolas do terrible things to enormous creatures including Flameblast Dragon, Thraximundar, and others. Each time this happened, I saw the person who had cast the Slave of Bolas either cackling with glee or trying unsuccessfully to keep from doing so.

My experience in the Prerelease was a great demonstration to me that the hybrid gold cards met all of their goals. I was originally concerned that my deck wouldn't have enough cards in any three-color combination I chose, but the pile of hybrid gold cards I made comfortably finished my deck off. That pile included a Jund Hackblade, two copies of Slave of Bolas, and two hybrid gold cards that I can't tell you about yet. The Jund-aligned hybrid gold cards I had were especially welcome because in my three packs of Alara Reborn I didn't open any landcycling creatures that fit in my color, and I also had a grand total of zero Borderposts. That lack of mana fixing meant that Jund Hackblade and my other cards that cost

helped my mana situation a lot. I also saw tons of hybrid gold cards in play at all of the other tables, and I'm glad that the design team chose to include them.

Hybrid gold cards solved the design team's problems in a surprisingly elegant way. Those cards fit into the structure of the Shards of Alara block because they have mana costs that put them solidly into one shard. They fit into the theme of Alara Reborn because they are multicolored (and require two colors to cast). They give players more playable cards per pack because they fit into two different allied-color combinations and therefore give most players more cards they can play in each pack of Alara Reborn. They look strange at first glance, but they were the perfect solution to the design team's problems.

This weekend is the Alara Reborn Prerelease. I played in the Wizards employee Prerelease this past Wednesday and had a blast, and we invite you to go have that same fun this weekend. Our new event locator will help you find a location close to where you live. Head on out this Saturday and get your hands on the shiny new gold cards!

Posted in Latest Developments on April 24, 2009