Posted in Latest Developments on September 28, 2012

y name is Sam Stoddard, and I am a development intern here at Wizards of the Coast. For people who don't know, Wizards R&D tends to hire potential developers and designers through an intern program, where we get an opportunity to learn about the business and prove our chops. Billy Moreno, Zac Hill, Tom LaPille, Erik Lauer, and many other developers both past and present began their careers as development interns, and I'm proud and thankful to be a part of that tradition. I have been playing Magic for over eighteen years (as surreal as that number sounds), been on the Pro Tour, written articles, hosted a podcast, been part of a video coverage team for events—all of which led to an email from Dave Humphreys wanting to know if I would be interested in applying for an open intern position. How do you turn down an offer like that?

That position began just about four months ago. My first day on the job, after the basic HR goodies were done with, I was given a few things—a desk, computer, and chair setup to work at; a box of blank Magic cards to write on; and the printouts of the next year of Magic. Let's just call that last one a little bit daunting. A few days before, I was playing Avacyn Restored release events on Magic Online, trying to learn that Limited format, and then there I was poring through Magic 2013, Return to Ravnica, Gatecrash, and "Sinker." You know the scene in The Matrix where Neo is getting hundreds of fighting routines uploaded into his brain? It felt kind of like that, except with more discussion of how to weaponize ponies in the background. Not to alarm anyone, but we're getting close. Maybe too close... 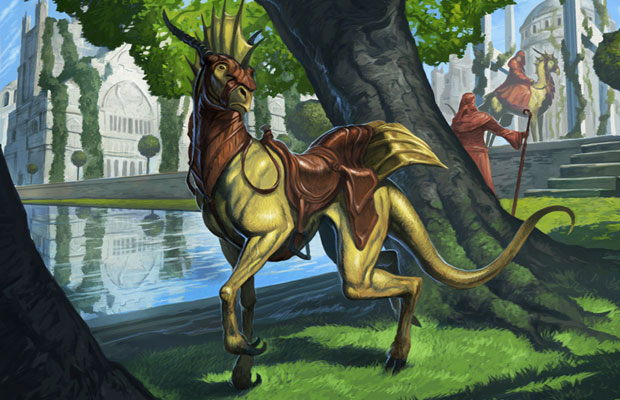 As a development intern, my basic job duties include building and battling decks in the FFL, playing a lot of Limited playtests for upcoming sets, and making comments in Multiverse. It's a real hard life, I know, but somebody has to do it. Of course, there is more to it than just that. Developing Magic sets isn't done from the hip—we have a lot of processes and passes in place to improve the overall quality of the sets we put out, and a lot of meetings have to take place to get through those processes. We also learn more each time a new set comes out. Inevitably, there are things about each set we are happy with and things we know we could have done better; we are constantly working to increase the number of things in the former and reduce the things in the latter.

I can't talk much about the process of developing Return to Ravnica, since I wasn't yet at Wizards when that work took place. Instead, I experienced Return to Ravnica much like you will: as a completed entity to work around, not work on. What I can talk about is how, as a new developer, I tackled my job of learning the set, putting the cards through their paces, and finding out what I wanted to do when returning to the City of Guilds. 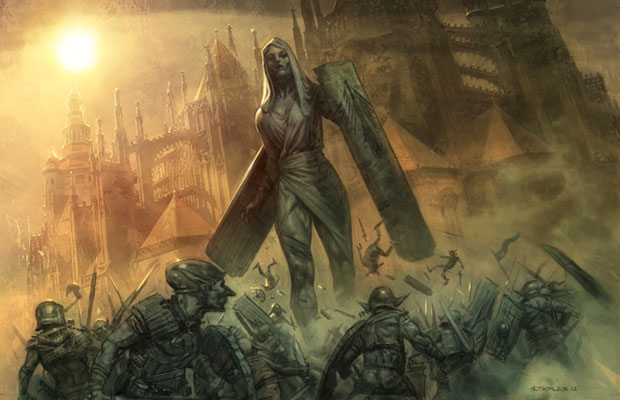 Like most of you, I was excited to hear during the PAX East Magic Panel that the next set would be returning to Ravnica. Ravnica holds a special place in my heart—the original block was my favorite for Limited up until Innistrad came out. It was also the set that I felt I was at my strongest as a player. When I accepted this position, it did come with a twinge of regret that I wouldn't experience Return to Ravnica the same way as I experienced the first one.

There is just something very different about experiencing a set for the first time as a list on a sheet than as the actual cards in your hands. Every Magic developer has a "Black Hole"—the sets that finished development but had not yet been released to the real world when the developer began—and Return to Ravnica sits squarely in mine. It's not that I won't ever know Return to Ravnica as well as I knew the original, but it will take some time. Unlike most everyone else in the Pit, I have yet to play a single game of RTR Limited, and I never saw the FFL during that same time period. I am just as excited as all of you to play my first games of the set with real cards at my local Prerelease—mine will just happen to be at Wizards of the Coast.

The first thing I did with my text spoiler of Return to Ravnica was flip to the end and check out the lands. I was excited to see the return of the shocklands and intrigued to see what would happen with the Gate subtype. Mana was one of the key selling points of the original Ravnica to me, so seeing a strong base let me know I would not have too much of a problem playing two- and three-color decks, especially with the "core set" duals in Magic 2010 and Innistrad added in. After that, it was on to see what all this multicolored world had in store.

The most memorable thing for my first pass on the file was getting excited not just to be playing the cards, but knowing how my friends back home would react when the set was finally released: seeing cards I knew someone would put in a Cube, the legend that would instantly slot into a friend's Commander deck, or the Johnny card that one of my friends would instantly go to work trying to break. One of my favorite things about Magic has always been the shared joy and excitement of discovering new things, and being on the opposite end of that has been interesting. The longer I am here, and the more sets I work on, the more excited I am to see how people will react to cards that I have had an impact on.

Back to work, I went through the rest of the card file, circling the cards I wanted to try to build decks around and starring cards I knew would fit into existing archetypes. Then I opened up a new instance of Notepad and started typing. 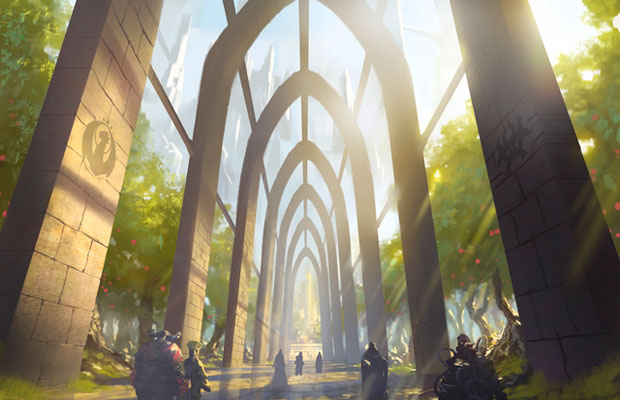 Once I'd put a few decklists together and was given a tutorial on how to use the handy-dandy sticker-printing tool that developer extraordinaire Dave Guskin put together, it was time to battle. The testing we do in the FFL is a little bit different than playing competitive Magic in the real world. In the FFL, we get to cheat things a bit. The R&D mulligan procedures involves being able to mulligan zero- and one-spell/land hands for free, since you don't learn a whole lot with one person having mana problems, and alternating play/draw based on a die roll, not on who won the previous game. This is testing the cards, after all, not simply trying to see who can beat whom. Some days, you are the person with the overpowered deck, beating people with cards that could probably use a little more tweaking, and other days you are testing the losing-end of a bad matchup, trying to figure out what can be added to the format to try and even it out a bit.

Now to drop the bombshell on you: being a Magic developer isn't all about having fun playing Magic all day. There is a lot of that, sure, but getting new Magic sets to the point where they are fun to play all day is serious business. The ultimate goal of development isn't just to make sure nothing is broken, it's also to make sure the game is fun. Getting both of those points to coexist can mean playing a lot of very unfun games and figuring out how to tweak things to be in a better spot. Successful deck building in the FFL can mean that you end up rendering your own deck obsolete in quick order. We're never going to be perfect—our resources for guessing what the next year of Magic will play like just can't compete with the entirety of the Magic-playing community actually playing with the set—but we try to make sure that everyone has something to do that excites them in each Magic set, and that there are a few safety valves to keep any one strategy from becoming too dominant.

The data overload of the first few days was pretty taxing. Trying to remember which cards were in which sets, which could be changed, and which had already had their "pencils down" moment was difficult. It's easy to tell in the real world, because anything you open in a booster pack is by its very nature immutable, but things inside of Wizards are a bit different—casting costs can change, abilities and keywords come and go, power and toughness are not absolute. It's not unusual to play a few games and try out a creature with slightly different stats than before, to see if it is more fun in that configuration, and then make a recommendation in the weekly FFL meeting. Pro tip for anybody reading this who might end up as a development intern someday, though: when making suggestions in your first week on which cards to alter based on your testing, try to focus on the cards that aren't at the printer. Until we develop a breed of flying monkeys that can scour the world with Sharpies to make a few quick corrections, the cards still in development are much easier to tweak. 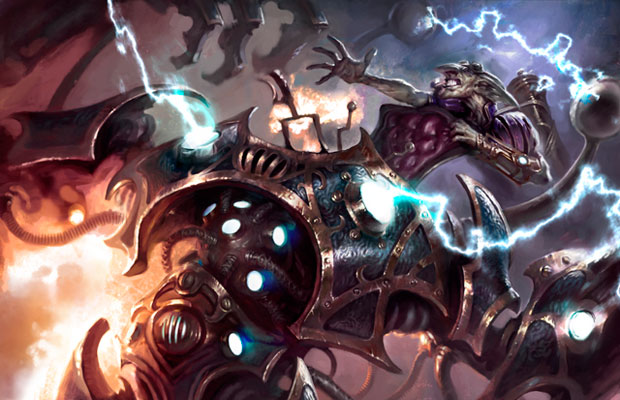 Four months in, and I think I have a pretty good grasp about what Return to Ravnica means, and how it will impact Constructed formats over the next year, but I am also looking forward to being proven wrong. One of the beautiful things about Magic is that once a set is released into the world, its development it is out of our hands and into yours.

The development process is intended to guide where a set goes, and in directions that we think will be fun and fruitful, but Magic is bigger than just us developers. Sets often accomplish our goals in ways we just never saw while they were in the building. I think it's great when people use cards in new and unexpected ways, or find synergies that we didn't know existed. It shows off just how much of a living and breathing thing Magic is as a whole. Which new decks that we played will actually emerge in the real world? Which unexpected cards will have impact on older formats? How will people react to the Limited environment? Only time will tell, but I am looking to find out as you all do.

Until next time, I hope you all enjoy Return to Ravnica as much as I have.

Posted in Latest Developments on September 28, 2012