Posted in Latest Developments on September 17, 2004

Wednesday afternoon, we, as a department, did our first draft with real Champions of Kamigawa cards. We had one full box to work with, so we sat twelve people around the table and passed out the packs. I drafted blue-red, and ended up going 1-2. Mark Gottlieb (yes, him) went 3-0. How. Embarrassing.

As we were busting open packs and ogling the new cards, Matt Place smiled and said, "This is awesome. This is why we work here—we get to draft three days early!" A fine sentiment, especially for Matt, for whom Champions marks the first set he worked on. But if I wanted to draft three days early, I'd just need to know a shady tournament organizer. So that's not why I work here.

I work here for the babes.

The Magic World of the Prerelease

For as long as I've been playing Magic, I have loved Prerelease tournaments. The first one I ever attended was Mirage, where I lost the "prize round" to Shauku, Endbringer. I won a gigantic Tempest Prerelease in Pittsburgh (without Rolling Thunder or Capsize on my deck!), and my brother took the title at the Mercadian Masques one two years later. Now that I work here at Wizards, I enjoy playing in the employee prerelease event that Organized Play runs after work (the only one I ever went 4-0 in, though, was Onslaught).

Like the aforementioned Mr. Gottlieb, I'll be poking my head in at the Seattle Champions of Kamigawa Prerelease event Saturday, as will several other R&D and Magic Online types. Say hello if you see me. Fun times will be had by all.

Champions of Kamigawa, like all large sets, contains a lot of new information and mechanics. Playing it completely unprepared, while noble, can be daunting and overwhelming. Our fine authors have shown off various new cards and concepts piece by piece over the last few weeks, but I'd like to do things a little more comprehensively.

Here, then, a rundown of the important things you'll need to know in order to kick butt at a prerelease and for the next year of limited play.

We'll start simple. Bushido (the "way of the warrior") is a triggered ability possessed by every Samurai in the set. An example:

Bushido 2 (When this creature blocks or becomes blocked, it gets +2/+2 until end of turn.)

A creature with bushido only gets the bonus once, regardless of the number of creatures blocking it. If a creature ends up with the bushido ability multiple times, they all apply. The different instances will trigger separately, but the overall effect will be cumulative. So a creature with bushido 2 and bushido 1 will get +3/+3 if it blocks or is blocked. Other than that, the ability is very straightforward.

Flip cards, like our buddy Nezumi Shortfang, are some of the most jaw-dropping cards in the set. Here's how they work.

The only information that matters while the card is in your library, hand, or graveyard is the top half. If there was a card that said "Return a creature card with 3 toughness from your graveyard to play," you couldn't use it on Nezumi Shortfang in your graveyard, since the only toughness that matters there is 1.

In play, you always start with the top half, and then if the "flip condition" is met over the course of the game, the creature turns over and becomes the new legendary creature. The new creature gets a new name, type line, power, toughness, and abilities. It retains its color and mana cost from its old form (so Engineered Explosives for 2 takes down Stabwhisker the Odious).

Flipping is a one-way process, meaning once flipped, there is no way to "unflip" a creature short of removing in from play. This should help to alleviate confusion. It will still help to mark creatures that have flipped with a coin or die.

A large number of the creatures in the new set are Spirits—think of them as the antagonists of the storyline. The Spirits bring with them a whole new slew of abilities, including Arcane spells, "spiritcraft," splice, and soulshift.

There is a new subtype of instants and sorceries in Champions—Arcane. Arcane signifies that the spell is a type of Spirit magic, although you are free to include them in any deck you like. The Arcane subtype means nothing on its own; it is merely there to be referred to by other cards.

"Spiritcraft" is the nickname we've given to the triggered abilities of certain Spirits that happen whenever you play a Spirit or Arcane spell. Thief of Hope's spiritcraft ability, for example, is to drain your opponent for 1 life. (The Thief's card image appears later in this article.)

If you are playing a Spirit-heavy deck, you'll be able to generate tons of free effects just about every time you play a spell. These abilities may not seem like much, but any combination of them in multiples is very powerful.

Splice is a crazy new—and slightly complicated—ability. Splice is a static ability that functions while a card is in your hand. "Splice onto Arcane

" (as on Glacial Ray) means "You may reveal this card from your hand as you play an Arcane spell. If you do, copy this card's text box onto that spell and pay

as an additional cost to play that spell." Note that the card you spliced remains in your hand to be used again later. So essentially you are combining cards to make bigger, more powerful spells, with no loss of card advantage.

The soulshift ability is unique to spirits; it allows you to "regrow" a cheaper Spirit from your graveyard whenever the Spirit with soulshift dies.

All instances of soulshift are for one less than the creature's converted mana cost—this way you can "chain down" as your creatures die. Because the ability triggers when the creature hits the graveyard, you can regrow things that died at the same time as did your creature with soulshift. So if Thief of Hope and a two-mana Spirit both die in combat at the same time, you can regrow the 2-mana Spirit with the Thief's soulshift.

I went over the changes to the "legend rule" in a previous article, so here's a quick recap.

There is no longer a creature type "Legend." Instead, we're now using "Legendary Creature" to match up with our use of supertypes on Legendary Lands and Legendary Artifacts. So you can no longer change a creature into a Legend with Unnatural Selection.

The bigger change, though, is what happens when a duplicate copy of a Legendary permanent enters play. Now, both copies of the permanent are put into their owners' graveyards instead of just the "newer" copy. This change does two things—one, it prevents you from drawing useless cards when your opponent has a legendary permanent in play that is also in your deck, and two, it allows us to design more powerful cheap legendary creatures for just that reason.

One old ability—"does not tap to attack"—gets a new look in Champions of Kamigawa with the keyword "vigilance." But that's not the only older mechanic coming back.

Equipment, for example, worked out so well in Mirrodin that we expect to keep it as a normal part of Magic going forward. Fantasy always has swords and shields in it, and the equipment mechanic is the best way to represent those items.

Another mechanic returning is indestructible: 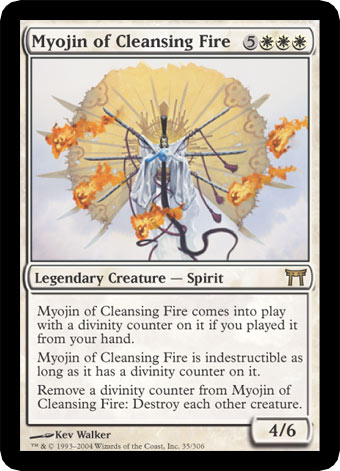 That's right, a giant creature that can't be killed unless you use his built-in Wrath of God! There is a cycle of such Myojin, each with an awesome ability coupled with indestructibility.

I hope that's enough information for you to succeed Saturday. If you're still confused on anything, ask your local judges. See you there!

We're still churning through the Type 1.5 submissions. We're have the finalists up for a vote soon.

Posted in Latest Developments on September 17, 2004