Posted in Latest Developments on September 10, 2004 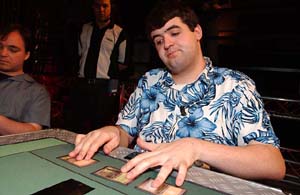 William 'Baby Huey' Jensen back about a year and a half ago. March 23, 2003. Venice, Italy. The format: Onslaught Block Constructed. The players: Billy Jensen and eventual tournament winner Osyp Lebedowicz. Pro Tour Semifinals. Jensen loses to the massive Akroma, Angel of Wrath while holding multiple copies of the same card in his hand.

Somewhere in the crowd, members of Magic R&D groaned.

The "legend rule," created back in Magic's earliest days as support for a new creature type—Legend, has long been on the minds of R&D. The rule makes a lot of sense from a flavor standpoint—should you try to summon a Legend that is already on the battlefield, your spell will fail—but flavor no longer drives the bus as far as rules go. If Legends are too good and too easy to play, games often become races to see who could get his copy into play first. This problem reared its ugly head during the Mercadian Masques block with Lin-Sivvi, Defiant Hero, eventually leading to the card being banned from Block play. We backed off on cheap, powerful Legends after that, but that didn't make the problem go away. A Pro Tour was decided because one player got out his eight-mana Angel, stranding the same card in his opponent's hand.

Later that day, after the event had ended, Magic designer and Pro Tour front man Mark Rosewater was hanging out with some players discussing the "legend rule" and the problems it caused, especially in tournaments. Justin Gary and Zvi Mowshowitz were tossing out ideas for potential fixes, and Rosewater was shooting them all down. But then Zvi struck gold.

"What if the second copy of a Legend put both of them in the graveyard?" he asked.

If you open a booster pack and get a Legend, you don't immediately know that you can only have one in play, and the creature type alone isn't enough to tell you that this card is different somehow. Same thing will Walls… many players attacked with Carnivorous Plant back in the Fourth Edition days because it was not intuitive that this huge creature shouldn't be able to attack. We fixed the Wall problem (sort of) with reminder text, but the issue of types with their own rules still loomed, especially with Legends.

Additionally, "Legend" was a creature type, but "Legendary"—as in Legendary Land and Legendary Artifact—was a supertype. This weirdness was grandfathered from the Legends set, and doesn't make a lot of sense when compared to how we handle subtypes and supertypes under our current system.

Flash forward a little bit, to the design of Champions of Kamigawa. As the set came together, it was apparent that Legends were going to be a big part of what the set was about. What was also apparent was that we really, really wanted to make good, aggressive, cheap Legends, but the existing "legend rule" hamstrung us.

Zvi to the rescue!

We don't like changing rules unless it's absolutely necessary, but this opportunity was too good to pass up. In one fell swoop, we could fix the subtype/supertype problem, fix the "creature types with hidden rules" problem, and change the "legend rule" to allow us to make better cards. And so we did. Here's what's new:

This synchs up Legend creatures and Legendary artifacts and lands nicely, and will allow us to refer to creature types and type-changing effects without having to say "except Legend."

2. The legend rule has changed. The new rule is as follows:

420.5e If two or more permanents with the same name have the supertype legendary, all are put into their owners' graveyards. This is called the "legend rule." If only one of those permanents is legendary, this rule doesn't apply.

This is a big functional change, but it does so much for us. It helps gameplay by preventing players from drawing "dead cards;" now, if you have a Legend in your hand that matches one your opponent has in play, you can play yours to good effect instead of not being able to do anything with it.

What I like most about the change, though, is that it opens up a lot of "forbidden" design space, allowing us to make some nice cheap powerful Legends. Witness: 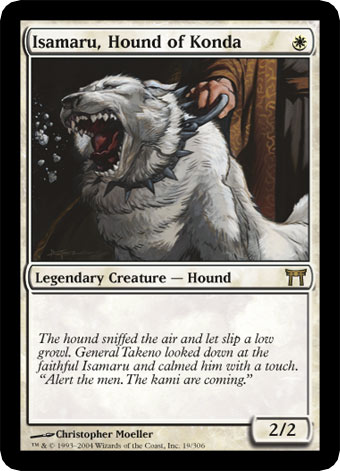 We certainly took the opportunity to make good legends and ran with it. Man, are there a lot of powerful legendary creatures in this new set. It's like Silvos, Rogue Elemental's class reunion!

In order to remove hidden rules baggage from all creature types, we had to alter the rules for something other than Legends. The creature type "Wall" now no longer implies anything, and instead all existing Walls are being errataed to have a keyword:

Note that no creatures in the Champions of Kamigawa set have the defender ability. This rules change is being made at this time in order to eliminate all rules inherent to specific creature types.

Bet you didn't expect that!

Old players may be a little perturbed by these changes. After all, the quirkiness of the Wall and Legend creature types was a little endearing. But we always have to look to the future, and having types that did secret things not spelled out on the cards is bad no matter which way you slice it. Now Walls will have their own ability, and Legends will at least have a supertype that will tip players off that they should behave differently than normal creatures.

The new rules are different and may be a little jarring at first, but we're confident that they will improve everyone's play experience while at the same time allowing us to make cooler cards.

It will take some effort to spread the word about the changes, especially to players that aren't tuned into the Internet. We've included the new rules in all the inserts in Champions boxes and decks, but we could use your help. If you know players that don't stay as up to date as you do, pass on the change, and point them to this article if they don't believe you!

Most of you that care like it. Good deal!

Posted in Latest Developments on September 10, 2004