Posted in Latest Developments on August 29, 2003

Exploring the two sides of legends

this week's column, the part of Randy Buehler will be played by me, Brandon Bozzi. For those of you that don't know me, and that's probably most of you, I'm the Creative Coordinator for Magic. In my job, I work on several different aspects of Magic. The majority of my time is spent managing the process for names and flavor text, but I also spend a good amount of time working on design and development teams. I act as a liaison between the creative and mechanical sides of R&D. Part of that entails helping to bring the flavor of a card together with its rules text to create a cohesive whole. Most times, the mechanics come first and the flavor grows out of them. But, in the case of legends, it is usually the other way around. Most often, legends are designed from a top-down perspective. That is, we think about what a legend is like in the story, and try to reflect those characteristics in terms of mechanics. To explore this process, let's take a look at a few legends from the Onslaught block, first in terms of story, and then in terms of how that story is represented mechanically on the card.

Kamahl started out as a kick-ass barbarian whose only goal was to be a champion in the pit fights. But, he was sidetracked from that goal, and eventually found himself in the Krosan forest speaking to Thriss, Nantuko Primus, leader of the nantuko. The ancient mantis-man set Kamahl on a path leading from anger to inner calm, and after communing with the forest for some time; Kamahl, Pit Fighter was reborn as Kamahl, Fist of Krosa.

Let's compare the old Kamahl, Pit Fighter to the new Kamahl, Fist of Krosa. The most obvious change is the move to green from red, representing the shift from barbarian to druid. Moving away from red cost Kamahl haste (he's learned patience), two points of power, and a nasty direct damage ability. But, the change definitely wasn't all bad. He got two points of toughness, and a land animation ability (representing his newfound connection with the forest). Not to mention the fact the he can Overrun every turn. This ability, while definitely in flavor for green, shows that our bald brute hasn't completely lost his love for battle.

Let's flashback: Jeska, Warrior Adept, Kamahl's sister, is on her deathbed. Everybody's favorite crazed goggle-wearing dementia summoner, Braids, is pumping her full of dark magic in order to "revive her" (killing Seton in the process). And, ta-da! Jeska, Warrior Adept is reborn as Phage, now cursed with the ability to rot any living thing she touches. But for some reason Phage isn't happy. She blames her brother for abandoning her, and thus condemning her to this curse. She makes the best of it though. Her newfound talents allow her to quickly rise in the ranks at the pit-fights, and grant her the favor of the Cabal Patriarch. All of which comes to an end in a climatic battle with her brother and Akroma. (For slightly more information on climatic battles between angels, barbarian brothers, and their reincarnated vengeful sisters, see "Karona, False God" below.)

The link between Phage's mechanics and story is simple. Whenever she touches anything, it dies. Now, normally an ability like this would stop at killing creatures, but Phage is not quite normal (note the flagpoles jammed into her shoulders, and the less than fashionable hairdo). Phage's rotting touch is so potent that it kills players and creatures alike. As such, she needed a drawback. In this case, she kills you unless you play her from your hand (that's right — no reanimation, no Sneak Attack, no Mind's Desire). When the card was made we had no story justification for the drawback, but now that I'm thinking about it… maybe because she resents being brought back from the dead, she kills anyone who would dare attempt such a thing. Or maybe it's just a mechanical drawback with no flavor link; I'll leave that up to you.

Karona is magic incarnate. She was born when Kamahl, Pit Fighter stuck down Phage and Akroma at the same time. Her presence on Otaria caused quite a ruckus. Everyone wanted to be close to her. Each race saw her as perfection. Each race wanted to worship her as their own god, in the image they saw her. And we all know what happens when you can't share. You fight. Soon we find every race on Otaria fighting with each other in the name of their "god," Karona.

Karona is one of the few Magic creatures to brandish all five colors. In her case, this represents that fact that she is magic, and therefore encompasses all the colors of magic. Even though she's not really a god, she is too powerful to be controlled. So she hops from player to player fueling the fires of combat.

Karona's haste is like Phage's drawback in that we had no story-based reasons for putting it on the card (but feel free to come up with one on your own). She has haste so that you can use her "real" ability to lead your creatures into a zealous charge to smash your opponent's face.

I should point out that not of all our legends grow from Magic's storyline. Several very popular and high profile legends were given that status for other reasons. Some, like Bladewing the Risen, were made legends to limit their power level. Some, like Cromat and the Silvos, Rogue Elemental, were given legend status because they have a special or interesting mechanic. Others, like Sliver Overlord, were given status for a more specific reason. The Overlord was created because we wanted the new batch of slivers to have a Sliver Queen equivalent.

In any case, just because some legends haven't showed up in novels doesn't mean they don't exist in the Magic storyline. With each block, a world is created, and then that world is explored both in novels and on cards. Generally, there is much overlap in which parts of the world they explore. But often cards or novels will focus more on an area of the story that the other has paid less or no attention to. An example of this in the Onslaught block is the story of the slivers. The card team spent time building this story in art and flavor text, but the novel authors chose to focus on other aspects of the plot. The point is that each world has a huge number of characters and stories to explore. Some of that is done on cards, some is done in novels.

Next week we'll return you to your regularly scheduled Randy column. Until then, may your lives be story driven, and your games be legendary. 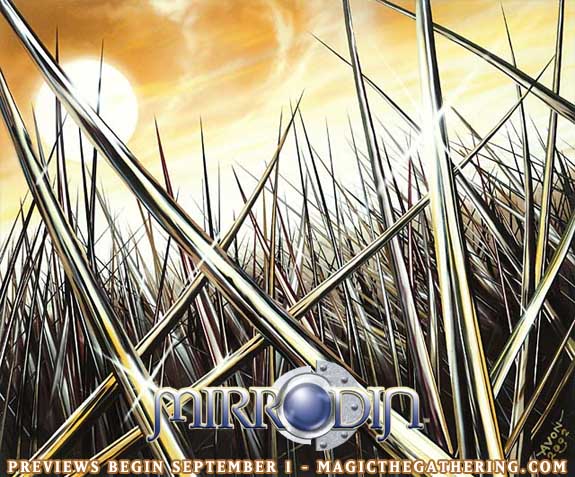 Posted in Latest Developments on August 29, 2003