Lessons at the Louvre

Posted in Latest Developments on December 1, 2006

again! I'm writing this article from Paris, where I'm helping out with coverage of the World Championships and also keeping an eye on what the world's best Magic players are actually doing with our cards. For The Past Returns Week here at magicthegathering.com, I figured I'd start out with a brief update about what I've been up to since I stopped writing Latest Developments and then quickly dive into a breakdown of all the lessons R&D is learning here at Worlds.

The best way to hear about what I've been up to lately is probably to listen to last month's podcast, when Brian David-Marshall turned the tables and interviewed me. The short version is that I've been promoted to management and I'm no longer actively involved in the day-to-day development of Magic cards. Instead I am overseeing the entire design and development process and also guiding the company's big-picture strategic thinking about the game. This has led to me to spend a decent chunk of time thinking about Magic Online as well, and that in turn has led me to agitate for the company to expand its computer game offerings. MTGO is doing really well for us, and we feel like no one else in the computer game space is making the kinds of deep strategy games that we're capable of making. The one we've announced already is still codenamed The Goblin Game and we should have that ready for public beta testing early next year. There will be more, but that's a subject for another time.

R&D is really out in force at this year's Worlds. Aaron Forsythe, Mark Rosewater, Henry Stern, Paul Sottosanti, Mark Gottlieb, and myself all made the trip to the Louvre to check out the sights and see all the action. Standard Constructed is probably the format that R&D spends the most time on, so Wednesday was a lot like a Final Exam for us. How did we do this year? Are players having fun? Did we miss something broken?!

There has been a real changing of the guard in R&D over the last couple of years, and that brought with it a change in development philosophy. Instead of trying to have some “Tier 1” cards that define constructed, the team has been trying not to have any Tier 1 cards at all and instead to fill the environment with as many Tier 2 cards as possible. The idea is to maximize deck diversity by making as many cards as possible relevant to constructed.

In general, most of the R&D guys had a smile on their face as they walked around seeing cards like Sek'kuar, Deathkeeper and Wildfire Emissary in play and observing that our plans had indeed come together. Even with that general happy feeling, though, there's always a couple of things that we feel like could have gone better. Here are some specific cards that the six of us have been talking about so far this week in Paris:

The Hellkite never changed between design and development. It came in as an 8-mana 5/5 Dragon that Pyrotechnics'ed for 5 and it headed off to typesetting the same way. Development figured that at 8 mana it was just too expensive to be really impactful, but it has surprised us by showing up a good bit more often than we expected. We had it in our own Dragonstorm deck, but that was the only place we played it. It's getting reanimated a bit more than expected and it's even getting hardcast from time to time, especially by Urzatron decks. (Yes, we did have a Dragonstorm deck, though we thought it would be a bit more vulnerable to discard and/or Voidslime than it appears to be.) I'm not sure we should have printed this particular dragon any differently, but I would feel better if we had more accurately predicted its true impact. 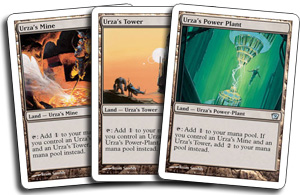 We just plain do not respect these enough in R&D. When putting Ninth Edition together, we figured that without Sylvan Scrying or Reap and Sow around any more to find that missing piece and without Tooth and Nail or Mirrodin artifacts to sink all that mana into, that they would go back to just being casual cards. It has clearly turned out that just “raw dogging” the Urzatron is so powerful that lots of tournament players are running these lands just hoping to get lucky and draw a complete set. I think that's bad for two different reasons: On the one hand it means that more games get decided by the luck of the draw rather than by a skillful decision made by one of the players, and on the other hand I think people are just tired of playing against the Urzatron by now. One could argue that it's okay to have that engine running around Standard for a couple of years – it's not so powerful that it qualifies as “broken,” I don't think – but they should not have made it into Ninth.

This one is a little subtle, but both those cards are templated as “target player” draws, discards, etc. We try to err on the side of having cards say “target player” instead of just “you draw cards” even when you're almost always going to be targeting yourself. We do this because it makes the cards more interactive, both because they can now be Misdirected by opponents and because sometimes you will want to target another player, especially in multiplayer where you might want to hit a teammate or even an enemy that you are trying to turn into a friend. However, there was a deck that showed up at Worlds that was just a pure control deck with Gaea's Blessing and zero damage sources. The victory condition was to point these draw/filtering cards (which the control would want to run anyway) at the opponent until they were decked. Yuck. Games involving this deck were kind of slow and boring, and I know Aaron in particular was annoyed that this templating decision contributed to making that deck possible. I'm not sure if we'll change anything based on this insight or not, but I am sure we'll have the conversation.

We did not see this infinite life combo coming. We actually did test a Soul Warden infinite life deck, but ours revolved around Enduring Renewal and Wild Cantor. In fact, as the “timeshifted” sheet went to print the one card we were the most scared that we would come to regret was Enduring Renewal. We couldn't break it ourselves so we went ahead and included it as a timeshifted card aimed at Johnny rather than Spike, but we feared that someone else could break it even so (not seeing any Enduring Renewal decks at Worlds was another happy moment). Anyway, Saffi and Crypt Champion is another example of a deck and a use of cards that we didn't expect but also don't have any problem with. We don't actually try to build all the good decks in R&D, and we don't even want to. What we want to do is print a bunch of useful parts for other people to build decks out of, and if we've done our job right then lots of interesting stuff will happen but none of it will come together in a broken way.

Gauntlet of Power and Bad Moon

Probably the biggest disappointment for us is the almost complete lack of monocolor decks this week. Now that we are out of the Ravnica block we have tried printing cards that would tempt players to leave behind the guilds and instead embrace the alternatives. We also wanted to make sure that there would good decks to play that did not require a ton of Ravnica dual lands. Colorless lands like Scrying Sheets, Desert, and Urza's Factory were also aimed at this same target (you can't really fit them into multicolor decks, but it you go mono then you get to take advantage of these good colorless lands). However, it appears that the advantages of monocolor and just not good enough yet. The pull of Ravnica is strong, and almost everything getting played at the top-level of tournament play is a two- or three-color deck. We certainly don't have anything against multicolor decks, but we do hope that Planar Chaos and Future Sight will enable at least some good monocolor options.

So there you have it – a bunch of lessons learned from Worlds so far. All in all things look pretty good from an R&D point of view (probably the best sign is actually the huge attendance numbers over in the side events area), but we're constantly looking for things we can do better and ways we can improve the game even more. I'm sure we'll learn more over the next few days, and if you want to check out Worlds for yourself, hop over to the tournament center coverage or check out the action yourself by tuning into the live streaming webcast of the Top 8 on Sunday. We get started at 9 a.m. local time Sunday morning, which works out to be 3 a.m. on the East Coast of the U.S. The Finals and the crowning of a new World Champion should happen around 7-8 hours later, so pretty much whatever timezone you're in, you can tune in when you wake up Sunday morning.

Posted in Latest Developments on December 1, 2006