. So simple, yet so beautiful. First, a definition. How did this word that my spellchecker doesn't recognize, this word that has never appeared on a Magic card, become part of the game's vernacular?

Dictionary.com tells me that cantrip is a Scots word meaning a magical spell or a witch's trick. Okay, but a word like that shouldn't catch on so easily. No, the roots of this word come from Magic: The Gathering's grandpappy, Dungeons & Dragons.

In D&D, “cantrips” were zero-level Magic-User spells—little spells that did little things and had funny names like flavor, yawn, and giggle. They debuted in the 1985 book Unearthed Arcana, and were considered equal to about one-fourth of a first-level spell in power. The Ice Age designers, long fans of D&D, borrowed this name for their own collection of little spells that did little things and then replaced themselves. 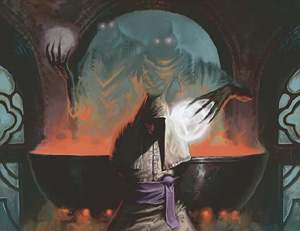 Through repeated use in publications like The Duelist, the name caught on in the general public, and remains in heavy use today, both inside R&D and among players.

As a player, designer, and developer, I love what cantrips do for the game. Most of the time, when cards are chosen for decks, some care must be paid to efficiency—What am I getting from this card? Is it worth it? In general, the card invested in something with a small, inefficient effect—Mons's Goblin Raiders, for example, or Benediction of Moons—turns out not to be worth it over many games played, and as such cards with minor effects on the game start to be ignored by most players. That's where the cantrip comes in; it offers you a deal: I'll give you a small, generally inefficient effect, but I won't cost you a card!

Now, suddenly, it's okay to include cards that do minor things—such as give a creature first strike until end of turn, or remove a card in a graveyard from the game—either because your deck actually needs the effect, or simply because they're fun to play, and you won't be charged the precious resource of cards for doing so.

Cantrips' Roles in the Game

When the category of cantrips debuted in Ice Age, their general purpose was to get tiny effects into players' decks by offering them a card in return. Their second, slightly more hidden benefit was their deck-thinning property—they lowered the virtual size of any deck they were in. Most players are familiar with the statement that running four copies of Urza's Bauble makes your deck “effectively 56 cards;” with some large number of cantrips in a deck it is possible to finds critical spells quite quickly.

Over the course of the next few sets' design and development process, Limited formats like Sealed Deck and Booster Draft started coming into their own, and the deck-thinning capabilities of cantrips were harnessed by R&D. A high number of Limited-playable ones were included in Mirage, and players that ran them could find lands more consistently in the all-important early turns of the game than those that didn't. This deck-churning quality of cantrips gave birth to other mechanics—like cycling and scry—as the game progressed.

The third role of cantrips is little used but very important. Sometimes R&D determines a certain effect needs to exist at a high power-level for a certain limited or constructed environment; to help facilitate it being played, the “cantrip” rider is sometimes tacked onto cards that have unique effects. More on this later.

If you compare cards that are cantrips to similar cards that do not replace themselves, you'll probably come to the conclusion that “draw a card” being tacked on ups the cost of a spell by about two mana. After all, Dismiss is Counterspell + 2, Runeboggle is Force Spike + 2, and Mystic Melting is Naturalize + 2.

Those additional two mana are merely a guideline; there isn't really a rule other than the cantrip version of a card should cost more mana than a non-cantrip version (Leap/Jump aside). We make lots of one-mana cantrips, and we've gone so far as to make a seven-mana one as well. Some cantrips cost only one more mana than their counterparts (Aura Blast vs. Demystify), and some cost three more (Sudden Strength vs. Giant Growth). In general we cost them to whatever makes sense at the moment, balancing the concerns of Limited play, Constructed play, the rest of the set they're in, and historical factors.

The Three Types of Cantrips

As I did research for this article, I noticed that most cantrips fell into one of three groups: the “cantrip proper,” which is generally a tiny effect at a cheap cost; the “cantrip version,” which is a new version of an old card with mana and “draw a card” added; and the “power bribe,” which are usually new effects that proved to be too underpowered to be interesting without the “draw a card” rider attached.

Below are some other examples of “cantrips proper.” Although some of them cost more than one mana, I believe that the effects of these cards in general are so small that most of them could have been printed at one mana if there were no other forces at play.

Cantrip Version. Compare Twitch to Twiddle. Now compare Urborg Uprising to Death's Duet. We have created “cantrip versions” of many spells over the years, and it is interesting how in some cases the cantrip version has proven to be the stronger Constructed card, and in some cases the cheaper non-replacing version has proven stronger. Want another great example? Compare Ember Shot to… Thermal Blast. Did you expect me to say Lightning Bolt?! Below are fifteen more examples of cards with non-cantrip counterparts (or close facsimiles thereof). Can you name all the “base versions” of these spells? Not all of them are the same color as the cantrip…

Power Bribe. Every once in a while we come up with a card like Quicken—something with a nifty little effect that probably wouldn't be playable even at one mana. So, in order to give people something worth considering in constructed decks, we tack on “draw a card.” Voila! Suddenly everyone's wheels are churning! Of course, we often use the cantrip rider to make cards that solve metagame issues more Constructed-worthy. Ground Seal and Tsabo's Web leap to mind as cards that were engineered to solve specific problems, and then made cantrips to ensure people would play with them. Below are more unique effects that become far more interesting when they don't cost a card:

As Mark discussed in his article this week, cantrips are now part of the ongoing revolving arsenal we have at our disposal when making Magic sets. Not every set will include them, but they'll be around more often than not. Even now, we're considering making cantrips a bigger part of the upcoming Core Set. Viva la cantrips!

My own choice would have to be Jester's Scepter. I can't believe we didn't make a Jester artifact in design—major props to the development team for coming up with the idea for this one!