he final version of a set is a collaboration between the members of design and development—design's job is to present a vision, and development's job is to translate that in a way that makes the most fun play experience possible. Design tries to not worry about power level so much, because that's something that is not under its control. Design does its best work when it make awesome cards that are fun and resonant no matter how powerful they are. Development's job is to figure out what the right power level is for cards, to make sure there are enough new things going in the set to keep people engaged. 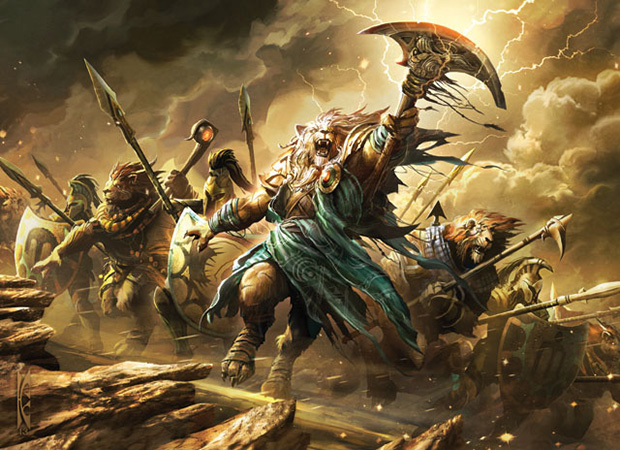 That's not all we do, though—we also attempt to make it so tournament play reflects the unique themes and feel of the set, so each year's Magic landscape looks different than the year before's. Of course, the way that R&D thinks of the set and how the public at large thinks of the set will not always be the same. Case in point is the first "enchantment" block, Urza's block. Did you know that there were 159 enchantments in Urza's block? That is more than is in Theros block. There were a ton of cards that also cared about enchantments, but despite that, the artifacts in the block lead people to think it was an artifact block.

That isn't really a mistake, though, because that is where the power of the block lies—in its artifacts and cards that care about artifacts, and not the enchantments. Yes, you get things like Replenish, Opalescence, and Yawgmoth's Bargain, but when most players think of Urza's block, they think of Tolarian Academy, Masticore, Memory Jar, Phyrexian Processor, Goblin Welder, and Tinker. Tournament metagames from Vintage to Block were all defined by the artifacts in the set. It was the part of the set that drew the most splash, and that took away from many of the themes that design was attempting to accomplish.

Every time we talk about a set based around a card type, affinity comes up in conversations. The goal is, no matter what we do, to never end up with another deck like Affinity in Standard. For those of you who may not know, Affinity was a deck from the original Mirrodin block containing artifact lands, Arcbound Ravager, Cranial Plating, Disciple of the Vault, and a number of other artifact cards. It was strong enough that, by the time we banned it, there were both Block and Standard decks running four to six main-deck artifact-removal spells, as well as a number of others in the board, and still not able to overcome the deck. It was the strongest deck in Standard for more than a year, until several of the key cards were banned. What's more amazing is the deck got almost nothing from any of the sets around it in Standard—it was all self-contained within Mirrodin block itself, which meant that there was nothing in the deck that could rotate out when Champions of Kamigawa was released. When making a list of "things that could've killed Magic," the Affinity deck is pretty high up on the list, and it is a mistake that we work very carefully to never repeat.

"Block Monsters" are a thing that development worries a lot about. The idea is that if you have a theme that is very wrapped up in one block, and you create Standard decks strong enough in that theme, then when Standard rotates, the Block decks will just be much stronger than everything else in Standard. When Champions of Kamigawa rotated into Standard, many players just ignored the set and kept playing Affinity. Why? Because the deck was not only still viable, but was stronger than anything Champions introduced into the metagame. This meant that if you had gotten bored or frustrated of playing against Affinity you were out of luck. If you liked new cards in Champions, that was cool and all... but you shouldn't actually be playing with them, you should just be playing with the previous year's cards. We want cards to be backwards compatible, and we want to make sure that your cards are useful in Standard for their entire life cycle, but we need to have some ebb and flow for the health of the game. We could just make each new block more powerful than the one that came before it, but that isn't really sustainable in the long run.

To help create an ebb and flow, we now seed cards for future blocks in both the previous block and core set to allow for the set's themes to be at their maximum effectiveness when they are released. This gives us the ability to let some cards rotate out of Standard, so if a deck is too strong, at least it will change. Think Steel Overseer the year before Scars of Mirrodin. Some very astute Magic players noticed the enchantment subtheme in Return to Ravnica, as well as Magic 2014, and correctly guessed that Theros would be an enchantment block. Cards like Ethereal Armor, Sphere of Safety, and Oath of the Wild Wood were created well before we knew exactly how Theros would use enchantments, in an effort to make sure we had the tools to create powerful enchantment-hungry decks that would be able to lose some of their effectiveness when Return to Ravnica-year rotated out of Standard. Not all of those cards may get used in enchantment decks, but they gave us some building blocks to start with.

If the problem with Urza's block was that the strong cards weren't enchantments, then we knew when we were working on Theros that we needed to make at least some of the strongest cards enchantments, in order to make is so enchantments were a big part of the cards in tournament-winning decks.

When the current designs for the Gods and their weapons came to be, we knew we had a pretty good starting point in terms of making powerful and appealing cards that got enchantments into people's decks. This wouldn't necessarily make people feel like they were playing all-enchantments decks in the same way that Scars of Mirrodin's Metalcraft or Tempered Steel decks rewarded artifacts, or Onslaught rewarded tribal—instead, it would be more like how Innistrad rewarded graveyard decks with cards like Snapcaster Mage and flashback cards that could be cast after being milled by Thought Scour or discarded to a Faithless Looting. I think that's okay—not every strategy should be "jam all the cards that say a thing into your deck and it works better;" there needs to be some variety to keep Magic varied over time.

As the block progressed, the hope was that we could expand on the number of enchantment creatures that decks ran, again by making independently awesome cards that happened to be enchantments—Courser of Kruphix as an example—as well as getting bestow creatures to become Standard players. In our Theros testing, we felt that Boon Satyr and Nighthowler were just about at the right level to see some Standard play; Born of the Gods included several creatures like Spiteful Returned and Herald of Torment; while Journey into Nyx added creatures like Mogis's Warhound, Hypnotic Siren, and Gnarled Felhide. The plan was that people would at least be close to playing some of these enchantment creatures in their decks because of their own strengths, and we could include enough rewards in Journey into Nyx—like Eidolon of Blossoms—to create a few decks where the constellation ability drove players to play with a different suite of cards than people who were not trying to activate constellation.

One of the difficult parts of developing the block was that design's vision for the set involved the number of enchantments increasing over time and having constellation in the third set as the big payoff. That meant we wouldn't be testing the mechanic in earnest until Theros had already been locked down as a set and, as a result, we were a little conservative on a few cards in Theros, to make sure we could still do most of the things we wanted to do with constellation.

I'm not sure how many, if any, constellation decks will show up in the Top 8 of Pro Tour Journey into Nyx, or whether they will make waves in Standard, but I believe the decks are very close. It was kind of a balancing act getting to where we are, but I am happy with where we ended up, and I look forward to seeing the results. I think we will get to see enchantment decks continue to shine as Journey into Nyx comes out, but they won't be so overpowered that they will damage the health of Standard next year.