Posted in Latest Developments on September 25, 2009

elcome to the last day of Zendikar previews. My preview card today has a landfall ability, but as I looked through the Zendikar file, I realized that there was far too much material in it for only one article about the landfall mechanic. Furthermore, the site's official Landfall Week is not far away. To handle this, I've decided to split one landfall article between those two weeks. Today I'll tackle some cards that are already on the visual spoiler, and in two weeks we'll have a look at some cards that aren't officially public yet.

Let's start with Zendikar's prerelease card, which you'll get as a gift for playing in any Zendikar Prerelease event this weekend. 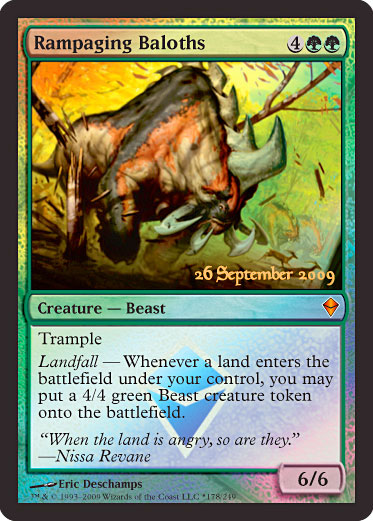 We pick the Prerelease card far in advance of the completion of a set's development because of how much work that card needs to do. For many players, it serves as their first meaningful interaction with the set, so it needs to present a good face. First, it should be splashy enough that it is fun and exciting to think about before the cards are in players' hands. Second, it should show off what makes its set unique. In the case of Zendikar, it shouldn't surprise you that the Prerelease card has a landfall ability. Third, it needs to be a card that has general appeal across most players. Something is pretty wrong if a card that fits these criteria is not in the set, but we have to think ahead of time about what the Prerelease card will be to have things work out as well as they can.

In the case of Rampaging Baloths, the card existed as it is in the file for a long time. Each time I read it, I became excited. It's a big creature, and it makes even more big creatures! I later realized that the level of excitement that the card had produced in me made it a strong candidate for a Prerelease card, so I left a comment saying as much to remind us later. Designer Greg Marques left a comment that agreed with me.

All cards receive scrutiny during playtesting, and that inevitably sparks ideas. Mark Rosewater has written in Making Magic about how censoring ideas limits design, and it limits development just as much. Multiverse is a great way to capture random ideas so that they can percolate for later, and here Zendikar developer Steve Warner left just such a random idea.

sw 10/22: Would this be as cool as an enchantment?
TML 11/10: Then it would be unkillable! I think it is both more exciting and more fun as a creature. 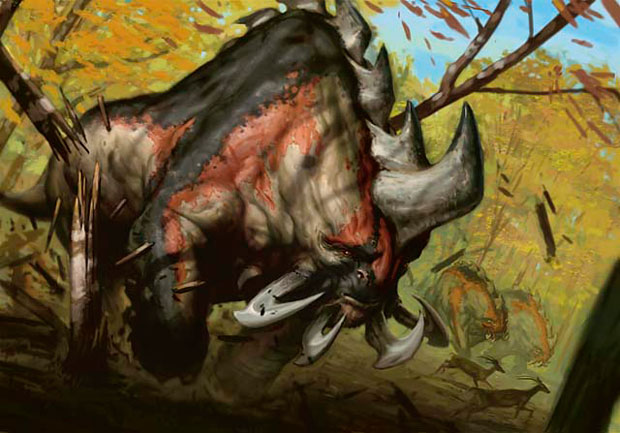 Either I was correct, or the power of agreement between me and me was too much for Aaron. I hope you get to enjoy your very own copy of Rampaging Baloths this weekend!

Mark Rosewater's first design for Bloodghast was as follows:

This is an obvious homage to Nether Shadow, which was a staple creature in black aggressive decks all the way back in 1997. Those decks used Buried Alive to put lots of Nether Shadows and Ashen Ghouls in the graveyard. When more creatures piled on top of them, they would pop out of the graveyard and keep attacking. This was a fun way to give aggressive decks a weapon against cards like Day of Judgment, so Mark went back to that well for this card. 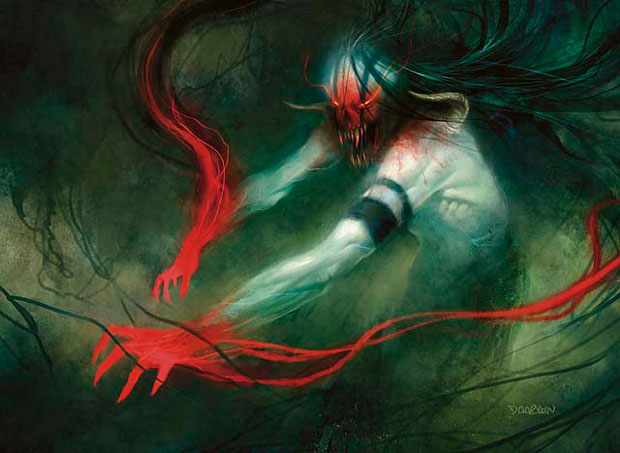 Not everything goes according to plan, however. We soon discovered that the one of the better uses for Bloodghast was putting it in heavy black control decks and using it as a free recurring blocker every turn. There's nothing wrong with blocking a lot, and we keep printing cards like Drudge Skeletons. However, much of the fun of that card is that there are sometimes shields-down moments where the black player doesn't have a black mana up to regenerate, and that gives the opponent a chance to kill the Drudge Skeletons for good. Bloodghast, on the other hand, had no such shields-down moment, so it was causing us some headaches.

The simplest solution was to remove its ability to block, and many playtesters favored this idea. However, there was significant opposition to this as well. The conflict came to a head in a Future Future League playtester meeting, where it was finally decided that the card would not be able to block, but it would be powered up in some other way because the development team liked it so much. The aftermath of this is described in the following Multiverse comment. 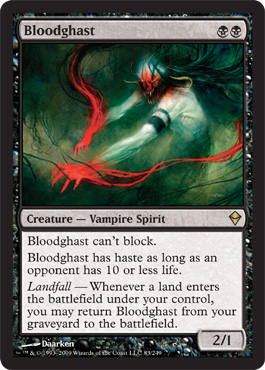 I was surprised, excited, and skeptical when I saw what Aaron and the Zendikar development team had come up with. Thankfully, it checked out fine in playtesting, so that is exactly the card that you will see in your packs this weekend.

Sometimes cards happen in beautiful ways, and other times we have to make a card under time pressure. Geyser Glider is one of the latter. I don't remember why we killed the card that previously held this slot. I do, however, remember the mildly desperate atmosphere of the meeting in which the card that filled it was made. We needed to settle on a red uncommon by the end of the day so that art could be commissioned for it, so Aaron pulled a bunch of people into a meeting room and we started bouncing ideas around.

Our first few efforts were uninspired, so Aaron disappeared for a moment and printed out copies of the file for us to stare at. When we looked at it, we realized that red uncommon was missing a medium-sized creature and could use another card that had a landfall ability. These restrictions helped narrow down what we were looking for. 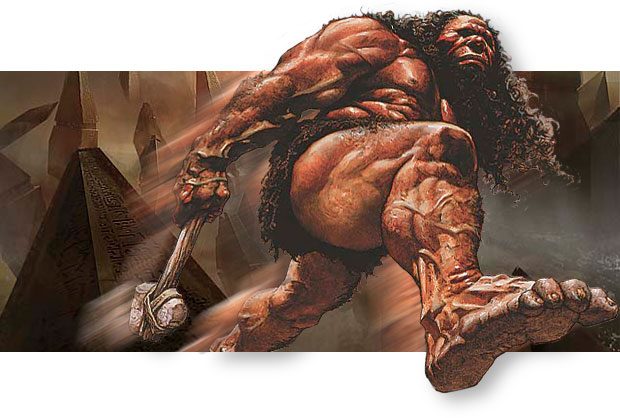 It wasn't long before someone suggested "Jumping Giant," a

4/4 with a landfall ability that gave it flying until end of turn. This, of course, represents the giant taking a huge flying leap that lasts for some absurd amount of time. We all found this to be a highly amusing concept. The next realization we made is that if a giant's leap is so high that it doesn't land until the end of the turn, it probably shakes the ground when it lands. To represent this, we added the line of text "When CARDNAME loses flying, it deals 1 damage to each other creature without flying." We left the meeting room laughing to ourselves about how clever we had been. 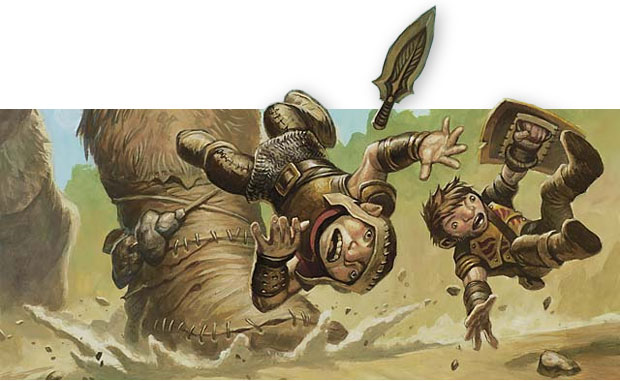 Unfortunately, the honeymoon didn't last long, and our fun was quashed by the realities of the Magic rules. Let's pretend that the battlefield contains only a Stampeding Rhino with 3 damage on it and a Jumping Giant that has jumped this turn. During the cleanup step, damage is removed at the same time that "until end of turn" effects end. When the Jumping Giant's trigger resolves, it will deal one damage to the Rhino, but the other 3 damage has already been removed, so the Rhino will not die. Even weirder, because damage has been introduced after the cleanup step, the game generates another cleanup step to remove the new damage.

This wording was just not going to work, and we didn't like any of the alternatives we could find. Therefore, Aaron just put the simpler version of the card into the file. 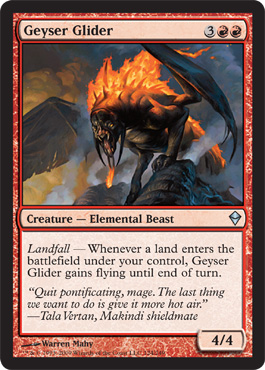 Despite our sadness about losing the hilarious "landing" text, we still fell in love with the card during the last run of Limited playtesting. Part of the reason we liked it was that it was novel for red to have something that played so similar to an Air Elemental. However, it mattered a ton that it could not normally defend in the air, and even its flying 4/4 mode could be stopped cold by one of blue's common creatures. We liked how the card played, so we never changed it again. However, I still felt that Jumping Giant should be memorialized in some way, so I added one last comment to Multiverse. 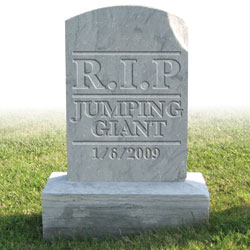 Finally, here is my preview card. 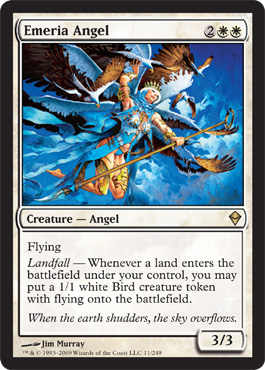 From the very beginning of development, there was an Angel in the file with a landfall ability that made token flying creatures. The interesting question was where its numbers would end up. It spent various amounts of time at four, five, and six mana, had stats that ranged from 3/3 to 4/5, and sometimes made two tokens and at other times made one token.

It did all this bouncing around because it had the most flexibility of any of our splashiest landfall cards. We knew that players would want to put lots of landfall cards in one deck. To make that deck the most fun it could be, we wanted to keep the splashiest landfall cards from stepping on each other in terms of mana cost. Once Ob Nixilis, the Fallen settled down at five mana and Rampaging Baloths planted itself at six mana, we knew that Emeria Angel wanted to be a four-mana creature. There was no way to make an Angel-sized creature at four mana that also made two creature tokens each time a land entered the battlefield, so we put it back down to one token and that's where the card stayed until print. 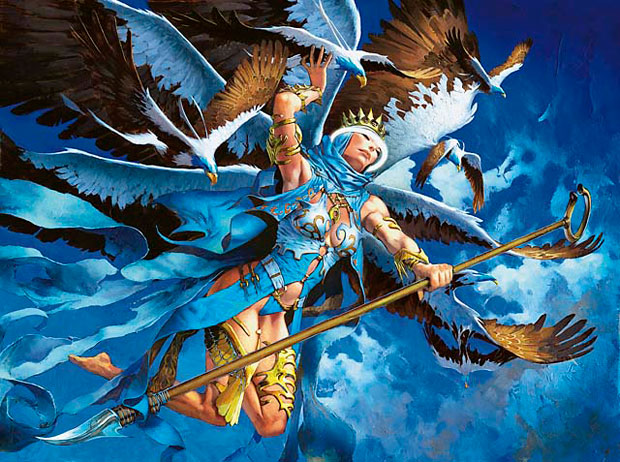 We think a lot about making individual cards as exciting as possible, but that's easy work compared to the task of making each piece of the Magic puzzle work together to create the most fun experience. I'm glad that we had the discipline to put Emeria Angel in the place that made the landfall mechanic overall work the best.

Landfall Week proper is not far away, and you'll get part II of this article when it comes. However, for now it's Prerelease weekend! To find an event near you, go to our Prerelease info page. If you choose to go to one of the large Regional Prereleases, you might meet a Magic celebrity, ranging from current and past members of Magic R&D to famous Magic pros. If you want to catch me in particular, you can find me in Phoenix, Arizona, at the big Regional Prerelease downtown on Saturday, then at Gamer's Inn on Sunday. I'm looking forward to meeting players this weekend, and I hope you have fun wherever you go!

It appears that there's not much consensus about which of these lands you like the most, and I'm happy that all of them have fans. My preview card did just a little better than the rest; my guess is that this is because it was the newest of the four cards to the readers.

As of last week, only four of the five lands in this cycle were available on the Visual Spoiler, so that's all I could poll you about. I got permission from Brand to show you the last one today. Here it is! 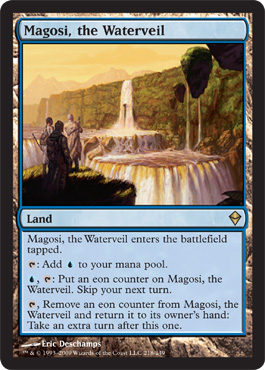 Posted in Latest Developments on September 25, 2009