Posted in Latest Developments on October 9, 2009

wo weeks ago, I wrote the first part of a two-part article about landfall. I also promised you that I would finish it when landfall week came around. Well, it's now officially Landfall Week, and I am a man of my word. Let's go!

Surrakar Marauder's story is a strange tale about the color pie. For the longest time, Mark Rosewater's Zendikar design file contained a

2/1 creature with a landfall trigger that gave it flying. This card was pretty much universally loved, but some issues with the number of two-cost creatures in white forced it to leave white. Rather than lose a card that everyone liked, Mark simply moved the card to black. Black can have flying creatures, so why not? Of course, that's when the storm of comments started arriving.

It is strange to me that the card that gained flying felt so natural to everyone in white, yet offended them in black. I did not experience the same negative emotions about flying in black here, but I do think that intimidate is a more natural fit for the card in black. Magic development is as much an art as a science, and this is one of the cards that made that very clear to me.

One thing that Mark is famous for in Magic R&D is recycling cards that he knows people like but that have been killed from a set, and submitting them again. One of his Worldwake submissions was the original white version of this guy. You'll have to wait to see what we did with it the second time around.

Many cards change in development, but there are always a few that don't. Grazing Gladehart is one such card. Mark Rosewater created it, everyone loved it, and it got to stay. The only contentious thing was the creative behind it. For a long time, it was called [Truffle Boar]. Here are the Multiverse comments.

I also liked the truffles, but we can't spend all of our boars in one place. We wouldn't want you to get tired of them!

Magic developers sometimes grouse to one another about Magic designers while we think they aren't listening. Why, we ask, do they resist so much when we make the decision to change cards they have fallen in love with, or why must they continue to hate cards that we have added to make the set play better? Developers are responsible for maintaining the design team's intent, but we also have to do what we need to do to make the set fun. Why can't they just let us do our job?

I spent last week's column talking about the design and development of the Zendikar "quests." I was part of the vigilante design team that produced the first quests made in this vein, and that is a contribution that I am proud of. However, it also gave me some insight into where designers' frustrations with developers come from.

Last week, I told you about how the quest team handed off the cycles of uncommon and rare quests that would end up making it all the way to print. However, the cycle of common landfall quests was a creation of the Zendikar development team. They struggled with the green member of the common cycle for a while, never finding an ability that they really liked. Eventually, they settled on the final text box of Khalni Heart Expedition that you see today.

My first reaction to this card's new text box was violently negative. To me, the idea of a quest is that it takes you from point A to point B. This card was rewarding you for playing lands by giving you more lands, which felt to me like going from point A to point A. At the time, each quest's playtest name was a verb clause, like "Become the Beastmaster" or "Find Ancient Secrets." I voiced my unhappiness with this card by calling it "Walk in a Circle."

I continued to complain about the card for a while when it came up in discussions, which began to earn me annoyed looks from other developers. At one point, one of them looked at me sideways and said "You sound annoyed, but I think you're actually having fun." This is, as it happened, right when I had attacked with a Territorial Baloth and Windrider Eel and was about to give each of them +4/+4. That developer was right, of course, and I stopped complaining about the card then.

I'm glad that the development team chose to protect Khalni Heart Expedition from my complaints. Zendikar became a better set when the quest team made a bunch of cards, but it is also a better set because Khalni Heart Expedition exists as is. Since then I realize that I have frustrated some designers by resisting changes that they felt strongly about, and I sympathize with them more now that I have experienced that myself. However, I'm also even more certain that sometimes the developers simply have to stand firm.

This is not a card I would have wanted to be remembered for. It's a fine card and played great, but it's not particularly inspired or exciting. It's also very clearly a card designed to fill a hole, which was "landfall artifact creature." However, two developments saved me from this fate. One was my creation of Archive Trap as part of the trap team that I led. The other was that this card lost a mana, a power, and a toughness so that Stonework Puma could be a three-mana 2/2 instead.

I'm glad that Hedron Scrabbler became smaller. Now I won't have to put an asterisk next to Archive Trap!

Various authors of Latest Developments in the past have talked about pointing, which is the metric we use to measure how good cards are in Limited. Pointing is a tool that we have to use very carefully. Assigning numbers that represent how good cards are makes it tempting to adjust the set until some arbitrary manipulation of those numbers in each color ends up very close together, then call the set balanced. This, however, is not necessarily a great idea. One developer might point a card at 2.2 while another points it at 2.5, and either one could be correct. We have lots of developers point the set and average all of the results to try to compensate for this, but it's still not perfect.

The other problem with pointing is that the method we actually use to decide what changes to make is much more precise. That method is to do lots and lots of playtesting. We learn much faster about sets from just playing Limited than we do from sitting around assigning numbers to cards. Magic developers are very skilled both at playing Magic and understanding sets, and the level of balance we achieve by playing, tweaking, and then repeating the process is much better than anything we could achieve by using numbers

Why, then, do we point? The biggest reason is that it helps us understand the overall texture of the set. For example, when we pointed Zendikar near the end of development, we discovered that the set's green cards were very flat in power. Other colors had particularly powerful commons and uncommons that you really wanted to open, but green just had a mass of cards that were similar in power. Having a dream when you open a pack in a draft or Sealed Deck is just more fun than not having one, so we chose to change a few green cards.

The cards that gained from this were Territorial Baloth, which was previously a 3/3 with trample, and Baloth Woodcrasher, which did not previously gain trample with landfall. We made a few other cards a little weaker to compensate, and green left our hands with a one more awesome common and uncommon than it might have otherwise.

Zendikar development started in earnest around the time that Shards of Alara released. At the time, we were wary of the power and play style of the Faerie deck in Standard, and Sower of Temptation in particular. Stealing creatures is always somewhat sadness-inducing, and it turns out that getting a 2/2 flying creature with your Control Magic doesn't make the effect any weaker. This must have influenced us when we made these comments about changing it from a 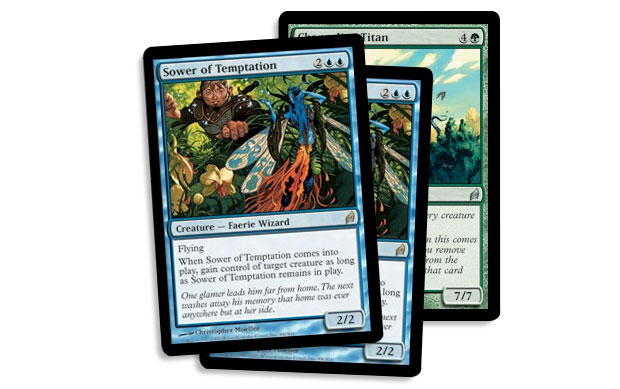 AF 1/26: Changed "as long as remains on the battlefield" to "as long as you control." I wish that's what Sower said. Otherwise leaving alone barring last-minute change of heart.
KEN 1/30/2009: I'll probably be Warp Worlding this out in EDH. Kinda wish it was a 6UUU 9/9. Maybe it's better, but at least it kills people fast.

The card got even more attention from us because it is in one of the intro packs. I was testing those one day with Aaron, and as rares often do in small card pools, my Roil Elemental ran him over repeatedly while he had cards in hand that would have allowed him to deal 2 damage to it. The result of that was the following comment.

Despite all the attention we paid to Roil Elemental, it is still not weak. I had one in a draft last Sunday, and I won two matches with it on its own. That same day in a different draft, I watched a good friend of mine use Roil Elemental to sacrifice most of his opponent's sizable army to an Eldrazi Monument. However, much of Magic's fun comes from the fact that it changes over time, so we don't like it when Constructed environments feel the same year after year. For this reason, we didn't feel bad about having Roil Elemental lose a bit of overall power.

I will end this article with a warning. If you are a prospective Magic card and you want to make it through development without having attention paid to you, don't be similar to a powerful card in the real world that we have found to be both confusing and more powerful than we hoped!

Wow. I don't know what to say really, but this is overwhelmingly positive. Thanks for the praise!

Posted in Latest Developments on October 9, 2009