Masters of the Multiverse

Posted in Latest Developments on August 28, 2009

I'll start with the traditional introduction of the team.

Tom LaPille: Hey, that's me! I joined Wizards a little over a year ago. My first development team was Magic 2010, and I was also on the Worldwake team. I'm also responsible for constructing Magic's line of introductory products, including Intro Packs. Finally, I write a column for magicthegathering.com that's called Latest Developments. Perhaps you've read it!

Erik Lauer: Erik is one of the most feared deckbuilders from the early days of the Pro Tour and is a seasoned Magic developer. He was the lead developer of Magic 2010, and he has been a member of every set development team since Eventide. He has also flexed his design muscles while working on Magic Online exclusive sets as the lead designer of both Masters Edition II and Masters Edition III.

Dave Guskin: Dave Guskin is a full time web developer for Wizards of the Coast, but he spends part of his time playing in the Future Future League and often serves on Magic development teams. Recently, he was on the development teams for both Alara Reborn and Planechase. Dave is a near-endless font of creative solutions to goofy problems, and his insights were invaluable while we grappled with the issues that arose from trying to construct a fun Limited set out of some Magic's earliest cards.

Peter Knudson: Peter was an intern in Magic R&D who has since moved on to do other things. Peter was a tireless playtester, participating in almost all the Limited playtests we had and creating tons of Future Future League decks. He also was part of the development teams of both Planechase and Masters Edition 3 during his time here.

Erik knew that none of the three sets from which he built Masters Edition III were originally designed for Limited play, and that Limited games with early sets were often painfully slow because of a lack of cards that could break stalemates. He fought this in Masters Edition III with the set's two major mechanical themes.

The first of Erik's themes was legendary creatures. Legends is full of multicolored legendary creatures, and Erik wanted Masters Edition III Limited to enable them to shine. This is most appropriate for a compilation set that draws heavily from Legends, a set
whose name is both simple and accurate. However, this theme served another purpose. Many legends from Legends are very simple cards that in their time were exciting simply because they were large. Those same cards would not excite players to the same degree now, but for old-school players they evoke memories of the past. Making it correct to play with big gold legends both contributed to the old-school feel that makes Masters Edition sets distinct and gave the set plenty of large creatures that could break stalemates.

The other mechanic that Erik chose to include is horsemanship from Portal: Three Kingdoms. Portal: Three Kingdoms was a top-down design built around Chinese history. Its designers and developers chose to go so far as to omit flying from the set and replace it with horsemanship, an ability that worked exactly the same but used a more appropriate flavor word. Evasion creatures are a very important tool that modern Magic sets use to help games end in a reasonable amount of time, and Legends and The Dark have very few flying creatures that are strong enough to play in Limited. Rather than struggle to find enough flying creatures, Erik chose to use horsemanship as his key evasion mechanic.

The last nuance to Erik's design was a light tribal theme. Early Magic included support for a number of different creature types, and Erik wanted to make sure that we got the support cards for those tribes online. Masters Edition III supports Kobolds, Minotaurs, and Faeries. These are not the same Faeries as Lorwyn block, however; at the dawn of Magic, Faeries were a green tribe. This led to one of the funnier things about the Masters Edition III. Horsemanship is the set's evasion mechanic, and it appears in white, blue, and black. Thanks to the Faerie tribe and a few one-off cards like Fire Drake, flying appears in red and green. The legend theme even gave us Tuknir Deathlock, a red and green legendary creature with flying who in my mind became the standard bearer for the set's strange assortment of red and green flying creatures. 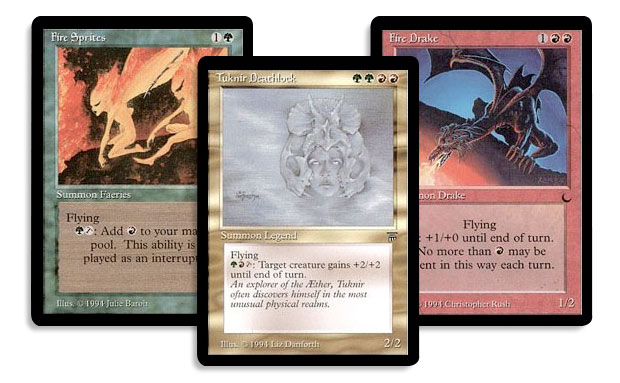 Erik was right about the challenges that we would face. Initially, however, there was not a high enough concentration of either legends or creatures with horsemanship, so games were still ending too slowly. We attacked the problem by moving cards in those categories down in rarity until there were enough of each of them, and then we tuned it so that the power in each of the themes is in balance. 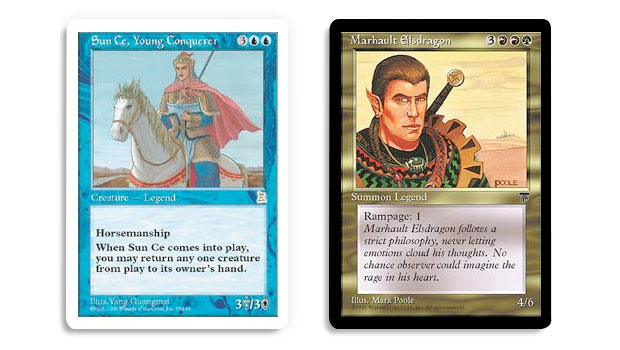 Legends and horsemanship are the things that make Masters Edition III distinctive, but the set still works like a normal Magic set. Creatures will die when they get lost in an Eightfold Maze or receive a Ghostly Visit. Combat steps will go in unexpected directions when creatures feel Fevered Strength or execute a Lightning Blow. Fellwar Stones and Astrolabes will allow players to cast multicolored legends more consistently. Masters Edition III is Magic like you know it, but with cards that you are either unfamiliar with or unlikely to have ever contemplated playing together.

Masters Edition III also introduces many famous Constructed cards to Magic Online. Black Vise, Nether Void, and The Abyss all terrorized players in the early years of Magic. Land Tax and Illusionary Mask have had entire decks built around them in the past. Mana Drain and Bazaar of Baghdad are both powerful enough that entire Vintage archetypes are built around them. Last but not least, Masters Edition III brings the five original enemy dual lands online. 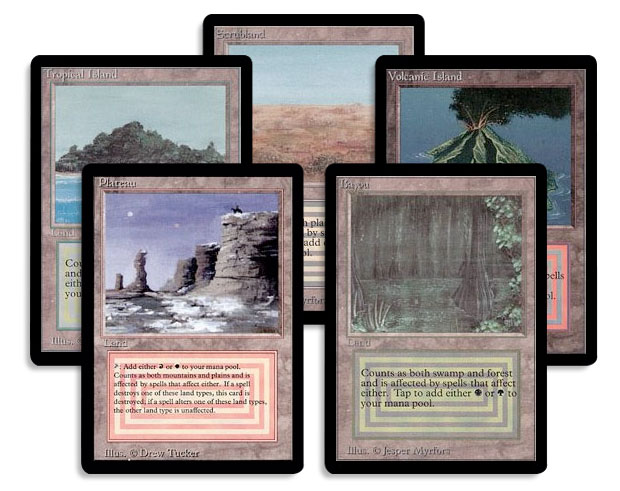 Masters Edition III has plenty to offer specific Magic Online formats as well. Now that almost every gold legend from Legends is available online, Commander players will have a larger selection of multicolored generals to choose from. Chain Lightning and Jungle Lion are Masters Edition III commons that will likely be appreciated in Pauper. Even Singleton will gain from Portal: Three Kingdoms cards like False Defeat, Burning of Xinye, and Fire Ambush that are differently flavored takes on other existing Magic cards. Finally, Masters Edition III brings the original art for Force Spike, Boomerang, Elves of Deep Shadow, and Fellwar Stone to Magic Online for players who prefer to play with the art from Magic's earliest sets rather than more recent printings.

Now, let's get into some Multiverse database comments!

William Jockush made the first comment here during the development of Portal Three Kingdoms, which released in July of 1999. Erik Lauer made the second comment during the development of Masters Edition III, which as I mentioned before will release on September 7, 2009. Between then and now, Grim Tutor fueled powerful Vintage combination decks. It is possible that this is the first Multiverse conversation with a ten year time lag between comments.

Jerrard of the Closed Fist

Let me explain. Magic cards are printed on large sheets, cut up, and randomized before they are placed in packs. In some old sets, cards appeared with different frequencies on a given sheet. The rarities of these cards was denoted by a combination of a rarity and a number. For example, a card that that appeared twice on the uncommon sheet would have the rarity U2. Another card in the same set might appear on the uncommon sheet only once and be a U1. We no longer do this in modern sets, but every non–core set before Ice Age did. 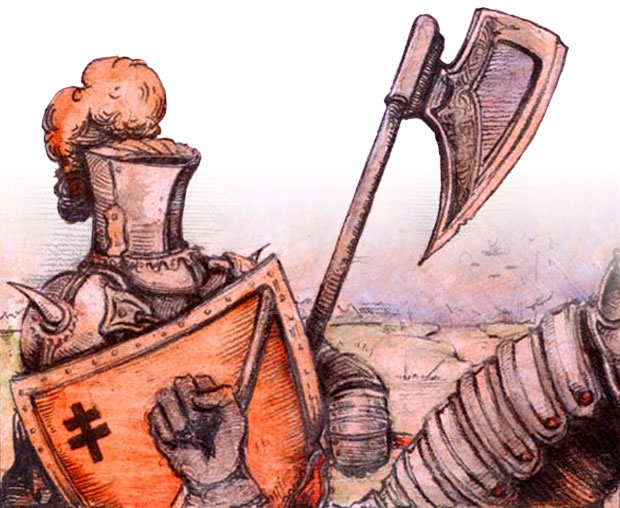 My first attempt at a solution to these problems was to add a cycle of two-color vanilla gold legends at common. This gave each allied color pair a reasonable large creature that helped end games, and it allowed me to fit five more multicolored legendary creatures into the set. However, it created some very strange situations. In one playtest game, I cast The Lady of the Mountain on turn six. Ken Nagle untapped and played his own The Lady of the Mountain, killing both of them due to the legend rule. I came over the top with The Lady of the Mountain and rode it to an eventual victory. However, other playtesters who did not experience repeated arrivals of the same legend said that Barktooth Warbeard, Torsten Von Ursus, and their ilk were great for ending games. 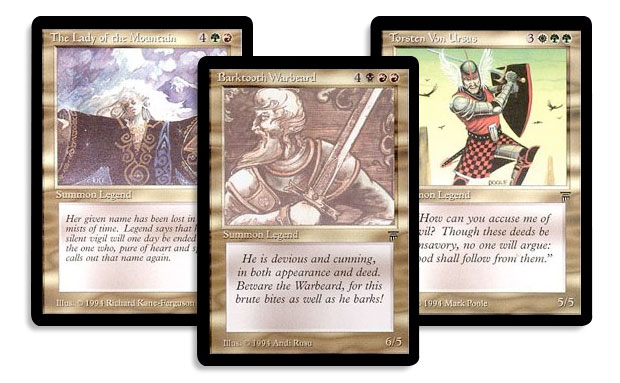 To deal with the strangeness without removing the good game play I had created, I resurrected the idea of the "common 1" and "common 2." There are ten gold legendary creatures at common in Masters Edition III, and they appear in packs half as often as the rest of the set's commons. This allowed me to preserve the game-ending breakthroughs that those cards caused, while making repeated arrivals of the same legend less frequent. I was also excited that having ten different legends at common allowed me to include almost every legend from Legends that had not previously been printed online.

Neither Wu Warship nor Red Cliffs Armada can attack unless the defending player controls an Island, just like the many Sea Serpent variants from Magic history. The historical Chinese flavor behind Portal Three Kingdoms, however, required that they be naval military units rather than sea serpents.

For a brief period of time, I forgot that Red Cliffs Armada was in Masters Edition II and included it in Masters Edition III in place of Wu Warship. A few days after I changed the card back to Wu Warship, a playtester wondered aloud to me what the flavor was behind Wu Warship keeping the Red Cliffs Armada from attacking. This confused me, and when I went to Multiverse to try to understand it, I discovered, as Dave pointed out, that I had changed the name of the card back to Wu Warship, but the text box still said that the Red Cliffs Armada could not attack unless the defending player controlled an Island. 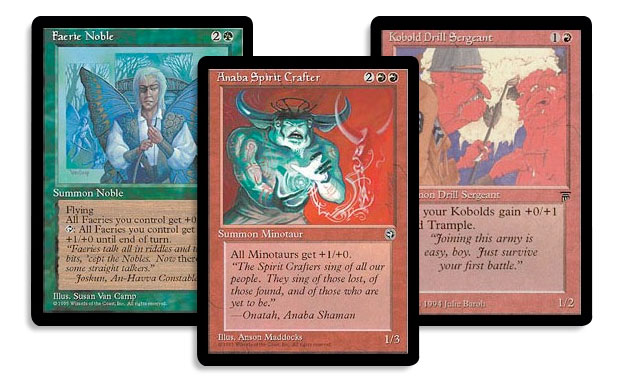 This poll must have looked insane, but I had a method to my madness: all three of these tribes receive support in Masters Edition III. Rather than put up a serious poll while the forums are in transition, I chose to do a frivolous one. The pit was almost unanimous in its support of the Minotaurs, so I'm glad the green Faeries and Kobolds have some support out there in the world.

Posted in Latest Developments on August 28, 2009