t's preview week on DailyMTG.com, and that means it's time for a new card from Born of the Gods! The card shouldn't need too much context to understand, so without further ado, I give you Fated Infatuation. 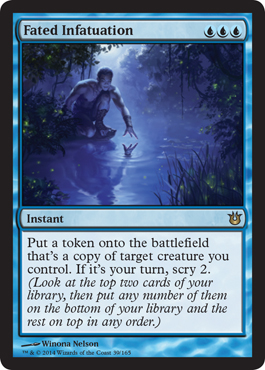 Greek mythology buffs out there might notice that the art on this card depicts something very similar to the myth of Narcissus, which is the inspiration for the card's art. Although, in the original version of the myth, Narcissus's image doesn't actually step out of the lake to greet him. Part of the creative of Theros block wasn't to just fit the well-known Greek myths into Magic cards, but make them our own, taking inspiration from them.

"Cloning" is a resonant and interesting enough mechanic that it appears twice in Alpha. In terms of resonant fantasy tropes, it's easy to understand the "thing that looks just like me" or the body-snatcher-esque idea of a shapeshifter taking another creature's form. Of course, getting the actual rules to work in the way people were expecting wasn't as easy—look at the original versions of Clone or Vesuvan Doppelganger.

Even though people liked the cards, we took a break for many years from clones. Because they were too powerful? Well... no. Because, for several years, they just didn't work. You see, before Magic Online was a thing, we would occasionally reach the point where tidying up the rules made some card not actually work. Or we would just have cards whose words read like things that worked, but never really did. That was okay, though, since people could generally hand-wave their way through cards like Clone, Camouflage, or Illusionary Mask. It's much harder when you have an online game that needs cards to be coded. Eventually, we fixed the rules and Clone could be a "thing" again.

As you may have noticed from some other previews, this card is part of a cycle of instants that allow their controllers to scry 2 if they cast them on their turn. By this time, you have probably seen both Fated Intervention and Fated Conflagration. If not, go to the gallery and check them out. They are pretty cool.

Look at Alpha again—it's full of cycles. You have the Moxes, the lucky charm cycle of lifegain-for-casting-spells artifacts, and color-hate, but probably the most important of all in terms of the long-term ideas of the game was the boon cycle. These were spells that cost one mana and provided three of a thing that the color cared about. For white it was life (or preventing damage), blue drew cards, black provided mana, red did damage, and green made a creature larger. Okay, so these were perhaps not the best balanced cards in the set, but it did help to show how important the idea that different colors do different things was. It took us quite a while to get the hang of it, and balance out those color pie issues, but I think we are in a pretty good place right now, in terms of getting the power level of different cards in the cycle to around the same spot. 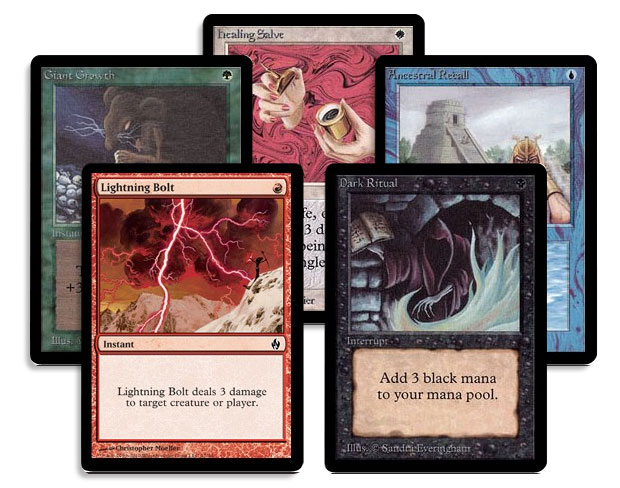 
We create cycles of cards because Magic, at its heart, is very much about the five colors, how they act differently, and how they act the same. One of the easiest ways of showing this off is to take one basic template for a card and show how each color fills out that template differently. Many times, the cycles come not out of design, but development. Design takes a lot of individual shots for cool cards, and development keeps the ones that look and play the best, then figures out what is missing in the set. Sometimes, we take one cool card and make four other versions of it for the other colors. Other cases are like this one, where Lead Developer Tom LaPille decided that Born of the Gods needed a cycle of context-independent rares that people could enjoy even if they weren't doing the main mechanical things the set was asking them to do—similar to how the Commands acted in Lorwyn.

Cycles also have the important role of creating exciting and different cards while not using up too much design space. One of the biggest constraints for design and development is that we have a game that is twenty years old, and one that we want to see survive more than twenty more, so leaving room for future generations of designers and developers is key. Being able to take the general idea of "a card that you can cast anytime, but get a bonus on your turn," and put it on five different cards in the set helps to both create a kind of cohesion in the set and lets us save some other ideas for future sets that might need them.

The goal of this cycle was to give players an interesting choice for when to cast their card, but giving players options is only interesting when they are real options. For this cycle, that meant finding effects that had the opportunity to be worth more than just "scry 2" when cast at the exact right time. Part of the way we did that is give the cards effects that were generally stronger when cast on an opponent's turn, to help make the tension between finding the right moment to cast the card and getting the scry to the right level. Fated Intervention, as an example, is clearly at its best when creating two instant creatures to either pressure a Planeswalker the opponent didn't know was in danger, recovering from a Wrath effect, or just plain old throwing some blockers out there. When you cast it on your turn, you are valuing the power of scry 2 over the opportunity cost of what those creatures are worth at instant speed. 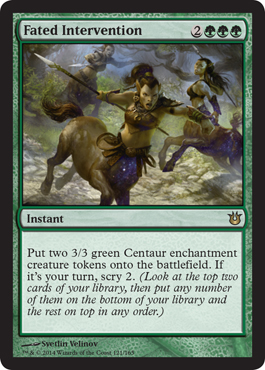 For Fated Infatuation, the value of a surprise blocker is mitigated by the fact that your opponent can kill the original creature in response. Leaving the mana open on your opponent's turn is also worth something if you have a counterspell, or just want to bluff one. But is it worth losing scry 2? There will be times when casting the spell when your opponent is tapped out is the right choice, and times when it is worth the risk for the advantage you are getting. This tension creates interesting game-play situations, which we found very enjoyable during testing.

So, Fated Infatuation is a Clone variant. It's also part of a larger cycle, but what does it do by itself? Finding

might seem hard coming out of a multicolor block, but there are rewards if you can. And, for one thing, there is a pretty popular Standard deck that it should fit into pretty well—Master of Waves turns out to be both blue and acts well when copies of it are made. Here is where the instant-speed part can often act as a boon—allowing for a player not play directly into Supreme Verdict, but be able to suddenly threaten lethal on a board that looked pretty tame only the turn before. In addition, you can cast Fated Infatuation in response to a removal spell (or a Polukranos for one), targeting Master of Waves to make a copy, and save all of the tokens from the original.

The utility doesn't end there, though. During FFL playtesting, it was a not at all an uncommon play in certain matchups to cast a turn-two Omenspeaker and follow it up with a turn-three Fated Infatuation for a total of scry 6, letting you dig, dig, dig for an important card in the matchup, or just make sure you were hitting all of your land drops. Opponent's green creatures getting you down? You could probably use an additional Tidebinder Mage with that. Heck, you can even just use the card to create a token copy of Frostburn Weird and turn Thassa on and get her into the red zone, or as a surprise blocker.

Just as an example, below is an FFL deck built by Ben Hayes in April of last year.

3 Thassa, God of the Sea 4 Master of Waves 3 Jace, Architect of Thought
60 Cards


I don't know if Infatuation will fit into every build of mono-blue, but it is very powerful if you choose to go that route. Fated Infatuation can make the deck more vulnerable to point removal, but it also provides much more powerful and explosive starts, improving some matchups but weakening others. For us, it's actually very interesting when we have cards like this that will move in and out of decks, depending on the metagame. We make a lot of decks in the FFL, and due to the ever-changing nature of cards, many of them never actually show up in the real world. Considering how close we were to the deck that actually won Pro Tour Theros , I have some faith that you will see decks similar to this at some point at your local game stores.