Posted in Latest Developments on November 4, 2011

elcome to the end of Modern Week. This is a week that is near and dear to my heart; not only was I a central figure in getting Modern pushed out into the real world, I was the one who pitched the idea of the theme week. I have written twice before about Modern; the first time I introduced the format for use at the Magic Online Community Cup, and the second time I discussed the results of that and announced that the format of Pro Tour Philadelphia was changed to Modern. Since then, we had the Pro Tour, and a few cards were added to the banned list. Today's article is a third update in that series. 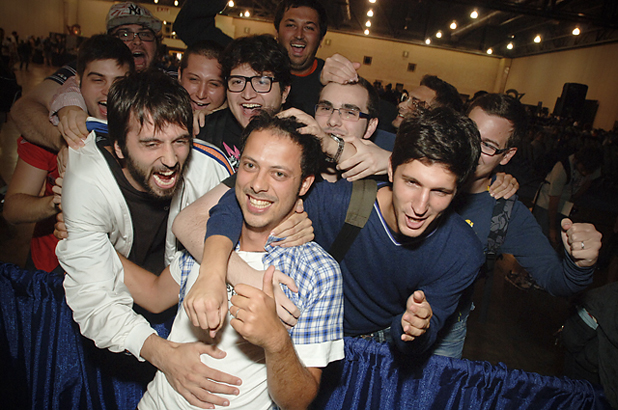 We ran Pro Tour Philadelphia with the Modern format. By our current standards, the format turned out to be pretty broken. We were hoping that it would be a turn-four format, but that didn't really work out. There were a large number of combination decks that could pull off consistent turn-three kills, anything resembling a control deck disappeared thanks to the Cloudpost big-mana decks, and the few attack decks that thrived either had access to either heavy disruption or a clock that was more consistent than the combination decks and nearly as fast.

Although that's not what we were looking for, there was a surge of interest in Modern in the following weeks. Stores around Seattle ran paper Modern tournaments on their own initiative that drew uncharacteristic surges of players. Magic Online Modern tournaments started firing. Many players copied decks from the Pro Tour, and several people started to brew their own efforts as well. These events saw some success, which was encouraging.

However, we didn't really like the Pro Tour format. As previously stated, it was too fast and not as diverse as we wanted. Therefore, we banned more cards. We don't have much data on what that did yet, because we haven't seen a lot of interest in the format since the bannings were announced. Some people have gone so far as to claim that the format has already died, and it's too late to save it.

Why is that? I've heard complaints on Twitter and through my email that blame us for changing the format in the wrong way. Although I sympathize with those who were frustrated, I was part of the group that discussed how we were going to change things, and I'm fairly confident that we made things better. Only time will tell.

My simpler explanation for the phenomenon is that we changed the format at all. While some Magic players enjoy figuring out a new format while working in the dark, the majority of Magic players like more guidance than that. This is why we run Pro Tours before PTQ seasons, why we run Grand Prix of formats we are trying to support, and why we have big Standard tournaments near the release of a new set. Players want decklists. Some want to just copy them and have something to play. Others want to know what they need to try to beat. It is easier to take actions when you have context, and by obviating seven of the Top 8 decks of the Pro Tour we have removed most of that context. Under this model, it's no wonder that the format seems to be on pause.

While I sympathize with those who are worried, I think you have a lot of reasons to not worry about Modern's health. Here's why:

This year at the Magic World Championships—which take place later this month—the best players in the world will be playing Modern Constructed on Day 3, which is the run-up to the cut to the Top 8. One of the three members of each national team will also be playing Modern. That will produce a huge pile of decklists that will provide a new starting point for the format. If you've been waiting for cool decks to play or cool decks to cleverly metagame against, you'll get them in two short weekends.

While we hope that the banned list has stopped changing, it is always possible that the format will change slightly again after Worlds. If something breaks, we're going to fix it. The longer Modern exists, the more costs there are to changing it. The day after Worlds, the only people who have played in Modern tournaments that are part of the road to premier tournament success are those who played at Worlds and Pro Tour Philadelphia. Next year, that group will grow significantly, so it's important that we get things right before the format spreads out into the rest of the world.

I've gotten ahead of myself. Let's take one step back.

We Are Supporting Modern at High Levels Next Year

Remember when I said that we run Pro Tours before Pro Tour Qualifier seasons in order to seed the format with decklists? This time is no different. We recently announced that the first Pro Tour Qualifier season of 2012 will be Modern. If you have wanted to play Modern in paper at large open tournaments, early next year is your first chance. These tournaments will qualify you for the second Pro Tour of next year.

For those of you who want to play in open tournaments with stakes that are a little higher, we will also be running two Modern Grand Prix next year. One will take place in Lincoln, Nebraska in February, and the second will take place in Turin, Italy at the end of March. While we haven't announced the schedule for the rest of the year, I think that you can count on more Modern Grand Prix to come as long as nothing catastrophic happens in the meantime.

It Takes Time for a Format to Grow

For those who are worrying about Modern dying on the vine, I'd like to take a trip back to the beginning of Legacy. The format was first announced in late 2004, when we decoupled the Vintage restricted list from the Legacy banned list in order to create a nonrotating format that included as large a swath of cards as we possibly could. While the announcement was made with a bang, the format started with barely a whimper. There wasn't anywhere to play it, no one knew what the decks would look like, and no one had thought about acquiring the cards to play it before, so it didn't see much play for quite a while.

The first premier tournament that used Legacy was Grand Prix Philadelphia in November of 2005, over a year after the format was first announced. Almost five hundred players showed up, which is pretty good for a format's first major open tournament. We had another Legacy Grand Prix in Lille a month later, which drew nearly twice as many players as Philadelphia. To get to the next Legacy Grand Prix, though, we have to skip all the way through 2006 to 2007, when there was one in Columbus. There was another year without a Legacy Grand Prix in 2008, one in Chicago in 2009, and two each in 2010 and 2011. As time has gone on, these have grown to be some of the largest tournaments we have, with Grand Prix Madrid this year being the largest Magic tournament of all time when it took place at 2,227 players.

That's missing an important piece, though—the StarCityGames.com Open Series had a lot to do with the growth of Legacy. That began in December of 2009 and has continued since, providing players with a steady stream of both new decklists and high-prize open tournaments to play them in. It seemed to me that Legacy didn't really start to take off until StarCity made the commitment to run it weekend after weekend. Grand Prix were always popular, but the real win for the format was when stores across the world began to run the format regularly, and that took a bit more high-profile exposure.

Legacy has a very high popularity right now, but it's had seven years to grow to that point. Modern has only had three or four months, and only a month or so of that has allowed stores to sanction their own Modern events. Comparing Modern to Legacy at this point is patently unfair.

The good news is that Modern is going to get the kind of support that it took to make Legacy happen on a grand scale very quickly. As mentioned before, the first Pro Tour Qualifier season of next year will be Modern, which will produce reams of decklists and many opportunities for people all around the world to play them in. We expect that this will get things going in the right direction.

Digital games like real-time strategy games and first-person shooters often change behind the scenes several times after their release. Maybe one faction's foot soldier is a little too tough, or the rail gun does too much damage when it hits a limb. These are things that can be fixed with patching. The fix will be invisible to the average player, but competitive players appreciate the increased balance.

Because Magic is an analog game, we have to be quite deliberate with our decisions, and we are stuck with them once we've made them. We can't just change what Stoneforge Mystic does; Stoneforge Mystic is what it is because we had to print a bunch of physical copies of it that we can't reach out into the universe and add mana to. While we can also change formats whenever we want, doing so is pretty obnoxious. Therefore, we don't make changes lightly.

The upshot of this is that we intend Modern to be around for a long time. We wouldn't have made a big deal about it if we didn't. Modern will have the time and support it needs to grow into something big and successful. Part of that will be running high-level tournaments using the format. Part of that will also be making the format into something that we think people want to play. We have curated Legacy carefully over time, and as we have gotten more experience with what its players want, the format has grown. I expect the same thing will happen to Modern.

While players have been clamoring for something like Modern for quite a while, the format is still in relative infancy compared to everything else going on in Magic right now. We did not create it flippantly, and we will support it going forward. We hope you'll join us for Modern's journey into the future.

Posted in Latest Developments on November 4, 2011