ast week on Latest Developments, I talked about sideways strategies and how they impact the process we use to create sets for Limited. What we did with Modern Masters was a little bit different, though. Modern Masters was really built on the back of powerful cards that we wanted to reprint, and that meant trying to find ways to highlight them in Limited. While not every card will fit perfectly into a draft strategy, we did our best when creating the format to make sure that as many as possible could show up in Limited. It also gave us the chance to reprint a number of popular build-arounds from years past and give players a Limited experience that is at a higher power level than we generally print in most expansions these days. 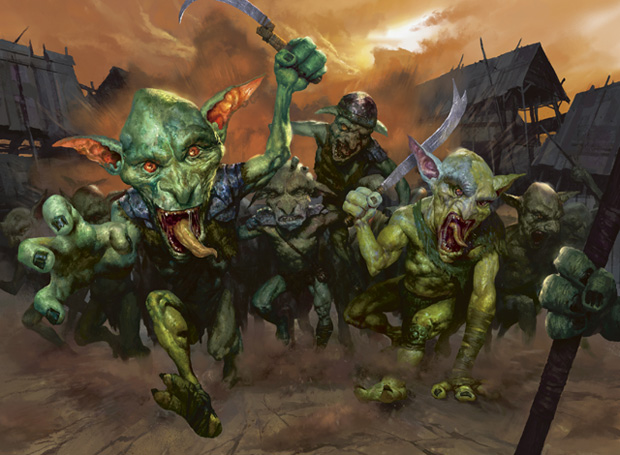 Creating a draft environment with all of these high-powered cards was difficult, as was finding the right balance between including powerful cards and archetypes and making sure the format was diverse enough to allow people to do their own thing. Not every block has the same overall Limited power level, and taking things from different blocks meant normalizing them and finding the right level to settle at. It also meant that some cards had to shift around in rarity, either up or down, to allow these archetypes to work at the level we wanted them to.

As I mentioned last week, we try to make sure that each color pair has a general strategy that can give players who need rails something to guide them on what to do in Draft. Some color pair strategies, like Tokens and Graveyard/Dredge, were easy, because they are overarching themes that we consistently hit upon in the color pairs we used them in. While we always tried to put a new spin on these decks, they tend to feature more cards from all the sets legal in Modern Masters. Others, like Giants, were more held together by some of the tribal cards in Lorwyn, while finding new examples of creatures in other sets to build upon their strategies.

Just to recap, here are the strategies that have already been talked about in various articles on DailyMTG.com:

That just leaves three—WB, UR, and BR. Luckily, I am here to tell you what two of those colors were set up to do. I think the last one will become obvious when you see the cards in blue and red. Let's just say that I wouldn't want to dampen the excitement by talking about it in arcane terms. The article would be too long to read; it would progress at a glacial pace.

Another deck borrowing heavily from Lorwyn, Black-Red Goblins is about two things—attacking and killing things (often the Goblins in the deck itself). Part of the fun in a Magic draft is that each deck can find cards that it ranks higher than other draft archetypes and make decisions based on predicting what you will or won't see for your deck as the draft moves along. It's good when there are cards you really want in your deck but will be chaff in your opponent's deck, but that can only go so far. The trick to making a color combination work is finding enough cards that could do work in this color combination but also support the other decks surrounding it, so that every deck isn't a silo with only cards that are good in it making an appearance and simply rewarding people for picking the right color combination at the start of the draft.

So, what kind of cards show up in Goblins that are also a high pick in other draft strategies? Well, there is this one: 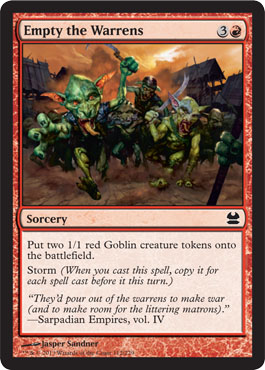 What can you do with a bunch of Goblin tokens in the black-red deck? Well, there are a few options. The first is the most basic—attack with a bunch of 1/1s. Unless you are storming for quite a bit (which is hard in Goblins), then you might consider using them as a resource. 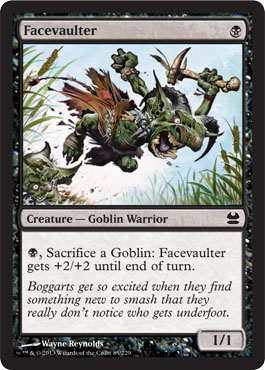 While Facevaulter is hardly the biggest Limited powerhouse in the history of Magic, he does great job in this deck of setting up very bad attacks for your opponent, or even being able to risk going lethal with enough other Goblins and open mana.

Now, maybe a horde of Goblin tokens being used as nothing but fodder isn't your thing. That's okay, not everyone is cut out for the Goblin Life. I'd argue that is what Goblins do, but we have other options. Instead of using each Goblin as a combat trick for one, you can always find a way to make your Goblins a little stronger in combat. 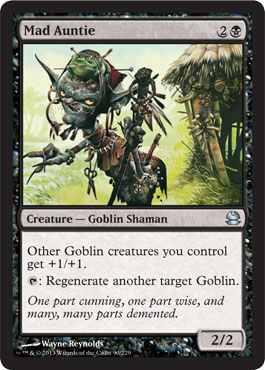 Another Lorwyn favorite, this time moving down from rare to uncommon. We have played around with rarity a bit in Modern Masters to create different draft strategies and to even out the playing field between decks. Much like Worm Harvest is supposed to guide players who open it to go into Black-Green Dredge, Mad Auntie is there to direct players looking for a way to go with a tribal reward.

Of course, there are rares that can find their way into the Goblin deck as well. While you've already seen that Kiki-Jiki is being reprinted as a mythic rare, there is one other legendary Goblin that has been winning the hearts and minds of Magic players for well over a decade. 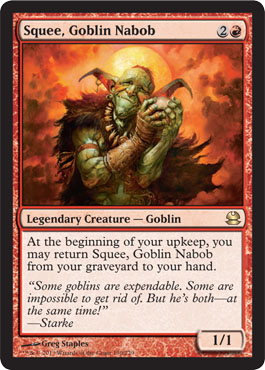 Everyone's favorite immortal Weatherlight cabin boy is back and ready to die for the cause again and again. Whether that be as a chump blocker every turn or as a sacrifice to the aforementioned Facevaulter (or one of the other sacrifice outlets that Goblins provides), Squee will keep coming back for more.

On to the second draft strategy to talk about today, and the second tribal draft strategy. This one comes almost entirely from Time Spiral block, or at least the creatures in it do. Rebels were, of course, introduced with Mercadian Masques, but they made their way into Modern via the many time portals, time rifts, and other timey-wimey disturbances in Time Spiral. They are also an aggressive strategy, but far less all-out than Goblins. Instead, the individual creatures tend to be more specialized, and they use their famous Rebel-searching mechanic to find other like-minded souls to join them in combat.

First, of course, is the Rebel everyone was thinking of when they found out Rebels is the white-black strategy. 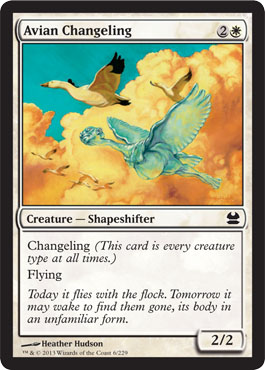 Okay, so, Avian Changeling may not have been what was in your mind just there, but it is an important Rebel in the hierarchy of Modern Masters. It's a solid card with evasion that not only can be searched out by any of the Rebel searchers in Modern Masters, but it also turns on any other tribal synergies you may have picked up in your deck with other creature types. Because several tribes overlap in colors, in this case Rebels and Giants, we have included a few changelings to smooth out the tribal and make sure there are enough creatures in tribe to draft for those colors.

I'd usually suggest only taking the ones in your colors, but Rebels obviously have a way around that. If you want to get one of them, you can use: 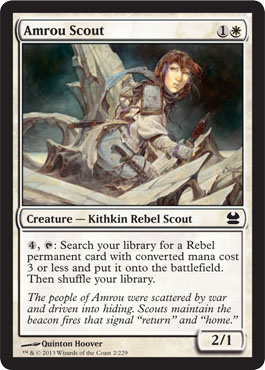 A classic of Time Spiral Limited, Amrou Scout provides not only a competitive body for a two-drop, but lets you do the "Rebel" thing and search out other creatures. In Modern Masters, Rebels acts as an aggro deck, but one that has a way to gain card advantage as the game goes on—by searching through its deck for new Rebels. Some of them are just attackers, but others are better used as utility creatures. If your opponent casts a large blocker, you might just search out... 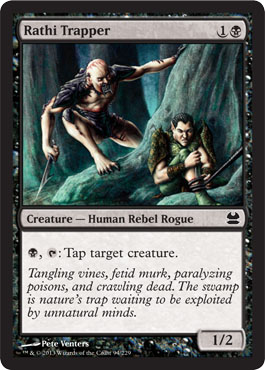 The color-shifted Master of Arms from Planar Chaos is back and ready to tap down creatures. I mentioned this before, but it bears repeating—there are many cards in Modern Masters that do a good job in a number of formats, and Rathi Trapper is one of them. While it is at its best in a White-Black Rebel strategy that can easily search it out, it can just as easily fit into BG Graveyard, BR Goblins, or UB Faeries. Of course, it is possible for those decks to search out cards like Rathi Trapper. "How?" you might ask. Well, it's simple: 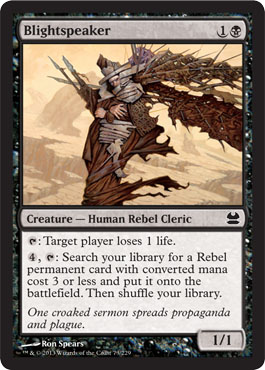 Another Rebel searcher who comes with a built-in ability to find himself useful no matter how stalled the board can be. Planar Chaos, and the numerous black Rebels in it, are well represented in Modern Masters. Part of making Modern Masters coherent was finding fun and interesting draft strategies for each color pair, and I can say that while I had not expected Rebels when I first learned of the format, I'm very happy how it turned out.

Go Your Own Way

When we create sets for Limited, we make sure that there are signposts for players to help them figure out what cards will work together and hopefully figure out on the first time what a reasonable deck could be. We also put enough other stuff in the sets to make sure that those are not the only options available. Modern Masters is a very deep Limited environment, and it offers plenty of strategies that are not as all-in as the color pairs allow or that mix and blend strategies to find a deck that works.

I hope you all get a chance to play Limited with Modern Masters, be it at your local store, at Grand Prix Las Vegas, or on Magic Online. It really is a wonderful format, and much different than anything you have drafted with recently.