More than Meets the Eye

he Magic 2011 Prerelease was last weekend, and the set's Launch Parties are this coming weekend. That's an exciting time for us because it is fun to watch the beginning of a set's reception, and it also puts the spotlight on the Limited format that we spent so much effort to create. Today, I'll talk about that effort, and why I'm so proud of Magic 2011's Limited format.

We've gotten lots of feedback that Rise of the Eldrazi Booster Draft is awesome. That is a huge credit to Matt Place, who was the lead developer of the set. His efforts to build lots of things to work with and intricate synergies into his set paid off massively. He ended up with a very deep Limited format as a result. There were plenty of fun decks to draft, card evaluation wasn't always obvious, and many cards could do surprising things in the right circumstances. Although Magic 2011 does not have as many new mechanics in it, we were still eager to apply as many of the lessons we learned from Rise of the Eldrazi as we could. Along the way, we discovered a few other things we could do to make the set great for Limited. We'll start with the most obvious one.

One of the most powerful early decisions that Magic 2011 lead developer Erik Lauer made was to realize that aiming for baseline Magic fantasy flavor did not necessarily mean that all non-evergreen keyword mechanics had to be excluded. We've done a ton of keywords over Magic's history. Many are rather mechanical in execution, like kicker and cycling. Others have pretty strong connections between flavor and mechanics, like shadow and devour. This is not to say that game mechanics that are, erm, mechanical are a bad thing. However, the philosophy behind our new core sets is that each card in them can stand on its own as a concept, and everything on the card has to contribute to that concept. The card Clear isn't a better match to concept because of cycling. On the other hand, the card Wei Night Raiders is a better match to concept because it has horsemanship. 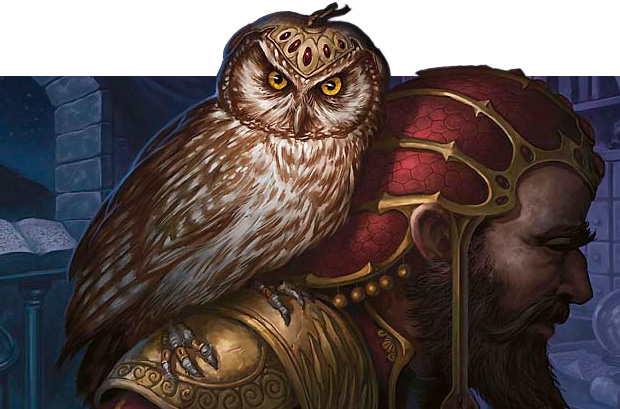 Erik wanted Magic 2011 Limited to feel different from Magic 2010, not because he thought Magic 2010 was bad—he led the development of Magic 2010 too!—but because it's fun when things change. He also knew that we had several existing keywords in Magic that satisfied the goal of making recognizable fantasy concepts. When he pitched a returning keyword mechanic to Magic 2011 lead designer Aaron Forsythe, Erik had one in mind, and that was scry. Aaron was dubious at first, but came around and led the design team in making a small amount of scry cards to give the set a splash of newness.

Scry does an excellent job of making Magic 2011 feel different from its predecessor while maintaining the flavor that a core set is supposed to have. Cards like Foresee and Crystal Ball feel like they belong, but they also let you do something that most core sets haven't let you done. It's also poetic, to me, that scry makes the most flavor sense in blue, but also has the most mechanical appeal to people who like to do the sort of things that blue does. All in all, I'd say that it's working out perfectly.

The Good Cards Push You in a Direction

One of the successes of Rise of the Eldrazi Limited is that there are several cards that change in value from deck to deck. For example, you want Bloodthrone Vampire in your Eldrazi Spawn token decks, but not in your blue-black leveler decks. Even more extreme is Raid Bombardment, which also works well only in Eldrazi Spawn token decks. Both of these cards push you down a path. 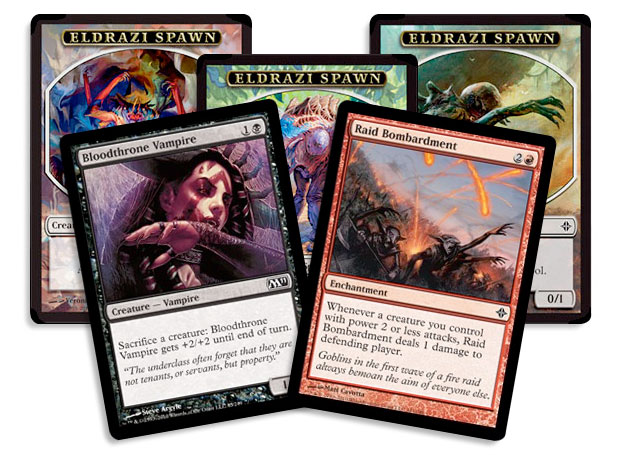 One of the early exercises that Erik had us work on as a development team was to decide what we wanted each two-color combination to feel like in Limited. That informed how we tweaked cards through the rest of development, and resulted in some interesting effects during drafting and deck building. In Magic 2010, many of each color's best cards were basically just as good in any deck. There are still plenty of Doom Blades and Lightning Bolts and Pacifisms in Magic 2011, but this time we also made sure to put in some strong cards that weren't equally good in any color combination.

For example, Magic 2010's Glorious Charge has been replaced with Inspired Charge. Both of these cards encourage you to play tons of creatures in your deck, but Inspired Charge is a lot stronger, so it is more likely than Glorious Charge to lead you down a path you might not have otherwise traveled. I'm not here to tell you which other color has the best small creatures to pair it with, but those of you who are interested in such things can take the time to figure that out. Another example of this is Æther Adept, which is a strong Limited card by any metric. However, its considerable strength is maximized in a deck that wants to attack quickly, as over the course of a long game the advantage gained from bouncing a creature is small. I'll let you decide which color combination he is best in, but I know that I've made up my mind.

There Are Cards to Build Around

As Doug talked about earlier this week, the design team built one common and one uncommon to go with each of the five planeswalkers in the set. Our intention was to make cards that you would build around in Constructed, but a side effect of this was that they became things to build around in Limited as well. Garruk's Packleader and Chandra's Spitfire both invite you to do what their planeswalker namesake wants you to do, and can send your draft off in a different direction. Jace's Erasure and Tome Scour at common give you the chance to draft a dedicated milling deck. Even Ajani's Pridemate can turn straight-up life-gain cards—not something that is normally powerful in Limited—into a force to be reckoned with. On Tuesday it caused Pro Tour Hall of Famer Dave Humpherys to sheepishly spend his Solemn Offering on an Ajani's Mantra. 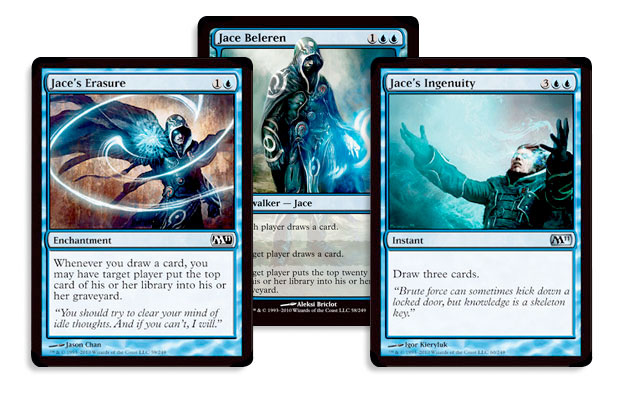 If I had to pick one thing about Magic 2010 that I was least happy with, it would be that cards rarely changed in value from deck to deck. The set of planeswalker build-arounds combined with cards like Fire Servant, as well as the color combination point I made just above this one, mean that cards can change in value in Limited decks much more drastically this time around.

There Are Good Combat Tricks in Every Color

One of the issues that I had with core set Limited formats before I came to Wizards is that their combat steps were often dry. The trick density wasn't that high, so you could usually count on things going the way you wanted them to. It also meant that you were almost always safe to attack when your creatures on the board were bigger. Erik had similar issues with previous core sets, and went out of his way to make that not true here. 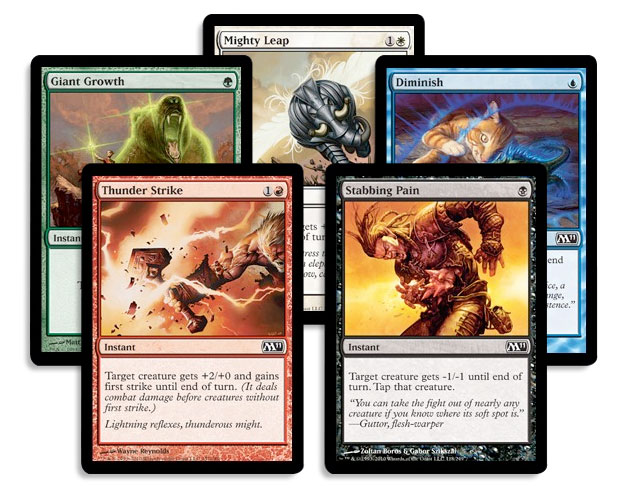 The Wizards employee Prerelease was this past Tuesday. Many things about my games were remarkable, but the most remarkable thing to me was that I lost combat steps to tricks from all five colors. Mighty Leap, Diminish, Stabbing Pain, Thunder Strike, and Giant Growth all surprised me at one point during the night. I never died to a surprise Inspired Charge, but several times I felt its threat lurking in the shadows. I was very pleased with the level of edge-of-my-seat tension that I felt through many of my games, and I think you will be too.

There Is Detail Tuning

One of the happy side effects of this being the second core set under this model is that we knew a lot of the pitfalls we would face well before we hit them. This meant that we got to a very good place earlier in the development cycle, and that gave us time to play a bunch of extra Limited. Of course, Magic developers exist because sets are more fun when we're done with them. We had done a lot of work to make the set fun, so it was easy for us to recruit people to play in our last rounds of playtesting. Even more exciting—some of those extra people were high-caliber Magic players, like former Japanese Magic pro Masami "Shaba" Ibamoto, who works on Duelmasters. 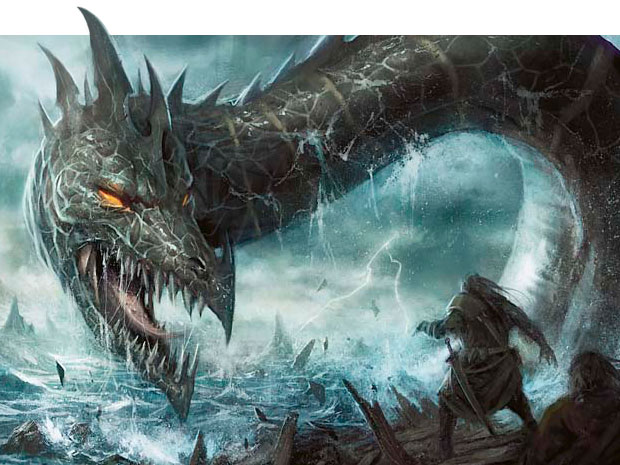 Our last few Drafts were extremely high-powered, with half the table having Pro Tour Sunday finishes. I did not fare well in those drafts, but we did get to fix several things that would otherwise have been annoying when strong players put their full skills to work on the Limited format. Most notably, this is when Harbor Serpent gained islandwalk, as there was a white-blue mirror match between Mike and Shaba that lasted so long it kept us from going to lunch. They both noted that if their Serpents had islandwalk, one of them would have died much more quickly, and Erik took their suggestion. We made several small changes like that near the end, but each of them makes the set play just a little bit better.

This coming weekend is the Magic 2011 Launch Parties. If you missed the Prerelease last weekend, this is another chance to get together with lots of people and play with what I think is our best core set yet. I'm more proud of this set than any I've been part of before it, and I hope you enjoy it as much as I enjoyed helping make it!