Posted in Latest Developments on December 26, 2008

This Latest Developments article doesn't lay out any grand R&D strategy, nor does it defend or explain major development decisions. Instead, it follows one card through the development process via comments from Multiverse, the internal R&D card database. That means that you're getting a look at how members of R&D actually talk to each other about cards. It's far from the only article this year that made use of Multiverse comments, naturally, but it's the one that used them perhaps the most extensively. Enjoy!
–Kelly Digges, magicthegathering.com editor

developers are responsible for improving and refining a set's identity, structure, and mechanics on a global, set-wide scale. But if you zoom in closer, Magic Developers also spend a lot of time fixing and improving individual abilities on individual cards. I've written about a lot of large-scale, macrocosmic topics in Shadowmoor development, so today I'm zooming in to a microcosmic topic: guiding you through the changes and challenges of an individual Shadowmoor card.

Since we update our sets in a top-secret database called "Multiverse," we have a record of all the changes a card traversed, and all the comments designers and developers made on the card along the way. Ironically, a set's development team members are the least likely to type in comments for their own set. After all, they can just convey their suggestions and complaints in the development meetings in person. The Multiverse comments are primarily used for people not on the team to communicate their feedback to the development team, and for the set's lead developer to convey the development team's response to that feedback.

The Shadowmoor development team was the crew reading these comments and using the feedback to make changes. The team was Aaron Forsythe (lead), Doug Beyer, Alexis Janson, Devin Low, Matt Place, and Steve Warner (with contributions from Mark Gottlieb and Jake Theis). 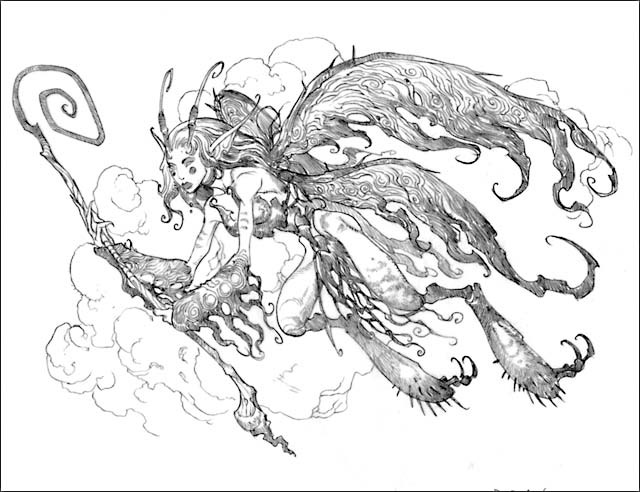 This faerie was born fifteen months ago on March 22, 2007, as a very different card:

CB11_JEL
Cremator
2B
Creature - Elemental
2/2
B, Sacrifice CARDNAME: Remove target card in a graveyard from the game.

Here's the version of the card at this point in development:

Many reasons combined to lead us to move "Cremator" from "Sacrifice me: ~" to "Discard me: ~" Certainly the big similarity to Heap Doll is one of them, although we could also have just changed Heap Doll.

The big graveyard mechanic in Shadowmoor is persist, and Cremator was originally intended to be an anti-persist weapon. But the "Sac me: ~" version of Cremator doesn't play very well against persist at all. Say the 3/3 vanilla persist creature Gravelgill Axeshark went to your opponent's graveyard, and you had Cremator with "Sacrifice CARDNAME: Remove target card in a graveyard from the game" on the table. Would it be worth it to you to sacrifice your 2/1 flying Cremator just to RFG the enemy Gravelgill Axeshark before it persisted back as a vanilla ground 2/2? Probably not.

Heap Doll is a better fit for the "Sac me: RFG target card in a graveyard" ability because players will more often be willing to sacrifice their one-mana 1/1 Heap Doll to prevent a persist creature from coming back, rather than sacrifice a 2/1 flier for which they already paid three mana.

With Heap Doll already in place, the Development team expanded their focus for the Cremator anti-graveyard slot. Changing Cremator from "Sacrifice me: ~" to "Discard me: ~" would move it from a Limited-format graveyard hoser to a Constructed-viable one. After all, the "Discard me: ~" version would cost zero mana to achieve the effect, whereas the "Sacrifice me: ~" version costs three mana. Beyond improving the card for Standard, bringing the total cost to use Cremator down to zero mana also gave the card a good shot to be useful in Constructed formats beyond Standard. In Extended and Eternal formats, you can't afford to pay three mana for a graveyard hoser, but you can afford to pay zero.

KEN 8/13: I like this nice Spikey common. This guy is a zero mana nonDuress-able hose to a turn 0 Kiki-Jiki Flash kill. A bit late to the party, but he's here!
MJ 8/15: this very narrow & powerful sideboard card could show up in ANY format, so it should be given a little extra love on the art/FT/etc.

These comments show people outside the development team noticing that the new Cremator could be a contender in all kinds of old formats, as well as Standard. Zero mana is priced to move!

sw 8/20: The number of times I have thought this was an in play sac ability has been huge. Is it going to read discard

Oh noes! Despite all the merits of "Discard me: Remove target card in a graveyard from the game," Cremator now changed to move in a new, third direction. It became this:

This third version of Cremator was actually phenomenal at stopping persist in Shadowmoor Limited. It stays on the board, flies overhead for 2 damage a turn, and whenever that pesky enemy Gravelgill Axeshark tries to persist, you just pay 1 life and remove the offending Axeshark from the game, without losing any cards yourself.

KEN 10/4: I see this as a Tarmogoyf hose, but black has Shriekmaw and Extended Dredge can kill on turn 2.
Del 10/9: Dev has requested that "Discard CARDNAME: Remove up to two target cards in graveyards from the game." replace the ability above
Del 10/9: Dev change is waiting on a templating discussion.
Del 10/9: We've never had an effect that removed multiple, specific cards from multiple graveyards at once. My guess is that the template is just confusing enough that the clarity of "in a single graveyard" was worth the loss of functionality. Confirm that it's worth it here?
Del 10/10: I'm doing it. Enough templates have been tweaked for 2HG that this doesn't seem as odd as it once would have.
Del 10/10: I put in the change. Activation cost was "Pay 1 life" and the ability was active in play.

Yes! Personally, I liked the "Discard me: Remove target card in a graveyard from the game." version best of all. Magic has a long history of powerful graveyard mechanics. Since most spells can't affect the graveyard, it's important to make cards that can provide interactivity against graveyard shenanigans. And instant-speed surprises are among the best ways to promote interactivity.

Similar arguments carried the day in development meetings, and the team decided to move back to Cremator #2, a

2/1 flier with "Discard me: Remove target card in a graveyard from the game." (By this time, the card had also received its final name: Faerie Macabre.) But the team only agreed to move back to the "Discard me: ~" version under one condition: that we make the card more powerful. Since we wanted some Constructed potential here, we decided to give the card a little more gas in the tank.

First, that meant bringing Faerie Macabre up from the

2/2 flying. Second, that meant making its discard ability more powerful, discarding from your hand for zero mana to remove two cards from graveyards instead of one.

Based on our internal Future Future League results and our data from real world Standard up through Future Sight, what were the powerful graveyard strategies available in Standard? Some of the most prominent included Makeshift Mannequin, Reveillark, Tarmogoyf, Epochrasite, Mystical Teachings, Dread Return, Torrent of Souls, and persist.

That brought us to the final version of "Cremator" you see in packs today:

One more benefit of the "Discard me: ~" version over the two "Activate me while I'm in play" versions is that the final Faerie Macabre can be used as an anti-graveyard weapon in any deck, not just black decks, since you never need to have black mana to use it.

It's always interesting to see our development meeting theories play out in the real world, so it was fun to see Marijn Lybaert earning thousands of dollars in the Top 8 of last month's Standard-format Pro Tour–Hollywood partially because he had one Faerie Macabre in the sideboard of his red-green mana ramp deck to tutor up with Primal Command against Reveillark decks.

Even with fifteen options, Firespout and Flame Javelin each pulled about a quarter of the votes. In many Standards of the past, the lower mana cost of Pyroclasm would make it a more important sweeper than Firespout. But in modern-day Standard, Firespout usually get the nod because so many key creatures boast 3 toughness, from Wren's Run Vanquisher, to some combination of two Lord of Atlantis and/or Merrow Reejerey, to Reveillark, to a lot of Tarmogoyfs. Firespout also allows red-green decks to sweep the ground without killing their own Birds of Paradise, sweep the air without killing their own ground troops, or just sweep everything away.

It will be interesting to see which cards on this list change places as the post-Shadowmoor metagame continues to develop.

Posted in Latest Developments on December 26, 2008