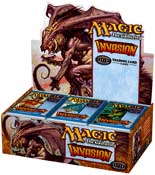 nvasion seems like a lifetime ago to me. I have now contributed to the development of 21 consecutive Magic sets, but Invasion was my very first. When development work for Invasion began I still hadn't played my last Pro Tour. I accepted a job at Wizards of the Coast in October of 1999 and when I arrived in town, my very first project was Invasion development (which had been running for about a month by then).

The biggest highlight of the whole process for me was the prerelease. Watching players rip into booster packs and thumb through the cards while smiling and showing off their trophies to their friends was awesome. There had been a lot of hype leading up to that prerelease and no one was disappointed. As a fan of the game, it made me feel really good to know I had helped create that experience and those cards.

But that would be getting ahead of the story. Aaron asked me to pinch-hit because he knew he didn't have any Invasion development war stories and he thought I might. (He still had both his Pro Tour Top 8's ahead of him as of late 1999 and he wouldn't take his job at Wizards for a couple of years yet.)

One of the first things I remember is the creation of the "Future Future League." When I got here, I learned that the developers had recently started up a "Future League." Every Wednesday night they met to play Standard constructed 6 months into the future. The idea was supposed to be that this helped them understand what the environment would be that new sets would get released into. The problem was that the set currently in development wouldn't come out for about 10 months. What good does it do to figure out how good Rishadan Port is if the set has already left R&D? I argued that we really ought to include the cards we still had the ability to affect in our constructed playtesting. Sure the file would be in constant flux and that would make it a challenge for our playtesters to keep up, but it was worth it. So we moved an extra 3-6 months into the future of the Future League, and the "FFL" has been running ever since.

I went digging through Multiverse while writing this article and I believe I found the first comments I ever entered into this legendary database. The card I was writing about was Fires of Yavimaya:

RB 11/11: I still doubt whether this will see enough constructed play to justify printing a super sealed card. recommend 2RG.

I had just finished smashing someone in Limited with this card and I don't like it when we print Limited "bombs" that have no constructed value. (In retrospect, this isn't so ridiculous in Limited that the anti-bomb argument should apply, but that's not my point here.) Well, I didn't think Fires would have any constructed value, so I was suggesting that we raise the cost to something that would be more fair in Limited.

Any readers who were playing back then are probably at least smiling right now, if not openly laughing at me because it turned out that Fires was one of the single most important cards to constructed in the entire set. In combination with the fading cards Saproling Burst and Blastoderm, the haste granted by Fires turned that red-green deck into a beast and for several months it was the consensus best deck in Standard.

So was the card Fires of Yavimaya actually too good? I got ignored anyway, but did I recommend the right course of action, but for the wrong reasons? I don't think so. Fires did turn out to be much better than we realized, but I think it wound up in a very good spot. Even in my comment above, I was arguing to add mana only because I did not think it was good enough for Standard constructed. If I had known it would be interesting in constructed, I would have been happy to print it at

. The thing is, something is always the best deck in Standard. Over the years, I think Fires is one of the more fair and interesting decks that has ever held that crown.

I'd like to think I would have realized what was up except that Nemesis was in my personal "black hole." I took the job at Wizards right after the Mercadian Masques Prerelease and then started working on Invasion. Thus I never truly experienced Nemesis or Prophecy as either a player or a developer. If I had, maybe I would have noticed the synergy between Fires and Saproling Burst. Or maybe not. Either way, I now think I am happy that that deck existed.

Another funny story involves Void. It was initially costed at

and no one was even thinking about playing it. We thought it was a potentially interesting card so we decided to lower the mana cost. With no one even considering Void at 5 mana, we decided to go all the way down to

. That experiment lasted about an hour. We moved up to

, but that version was still pretty crazy so we concluded that the original

cost was actually the right cost and that we should have been playing it all along.

A couple of my favorite stories about Invasion have already been told in this column. Way back in Latest Developments #11 ( "Fact, Fiction, or None of the Above") I admitted that I was the guy that argued that we should trim a mana off of Fact or Fiction and print it at

. Based on the poll results from that week, most readers agreed that the card mechanic was pretty cool and I still don't regret "pushing" it.

Twenty articles later, I told the story of my first day on the job, when I proposed the exact multilands that would end up being printed as uncommons in Invasion. Starting from day 1, I have argued that good multilands make Magic more fun and I've tried to make sure that every block gives players the tools they need to play 2+ color decks. At the time, those lands were considered very very good. Nowadays, we realize how big a drawback "comes into play tapped" can be and we're making lands that are even better. In fact, if it wasn't for the Reserved List, I'd be arguing for us to reprint the original dual lands.

Another crusade that I began during Invasion development was to make big creatures actually good enough to play in constructed tournaments. Before I got there, R&D took Serra Angel out of the core set because she was "above the curve." Somehow, she rotated out for being too good despite not being good enough for anyone to play with! As deck builders got better and tournament decks got more and more focused, the big creatures that R&D was printing just weren't making the cut any more. To be fair, R&D recognized that they were losing touch with the cutting edge of deck development and that's why the company went to the Pro Tour to start hiring new developers. So when I argued that Kavu Titan really wasn't going to get played at 3 mana for a 2/2 or 6 mana for a 5/5 trampler, they listened. Similarly, when I argued that the Dragons wouldn't break anything if they were 6/6's for 6 mana, they went with that change as well. In the years since then, I think the Standard environment has seen many more large monsters stomping across many more tables and I'm pretty happy about that.

I hope you've enjoyed Invasion week. I know I enjoyed revisiting the beginning of my career and reminiscing with you. Until Aaron needs a pinch-hitter again … enjoy dreaming of gold cards.