My Love of Eggs

Posted in Latest Developments on December 15, 2006

off, I got some great mail in response to last week’s B&R article. The two most commonly repeated concerns were that Gifts Ungiven should be restricted in Vintage and that either Goblin Lackey or Aether Vial should be banned from Legacy. Both items will be discussed for the next round of changes, although there is no guarantee that either will actually occur. Just want to be clear that we are, in fact, listening.

But as a lifelong fan of the game – someone who enjoys fanning through a fresh booster or a rousing game of casual Online Classic as much as the next guy – I simply love the stuff that our Creative people do, especially the hidden gems. As someone who was sucked into the world of Magic from my first glance at a card, I feel that every in-joke, sideways reference, and subtle homage is there for me and me alone, and I can’t help but think, “That is so freakin’ cool” when it finally dawns on me that the name “Thick-Skinned Goblin” was stolen right out of the flavor text of Keeper of Kookus. A card that I helped develop and a card I played with in multiplayer games in my college apartment, now all part of the same lineage. Super awesome.

Allow me to gush a little more. Check out these two paintings of red cards by two of my favorite Magic artists: 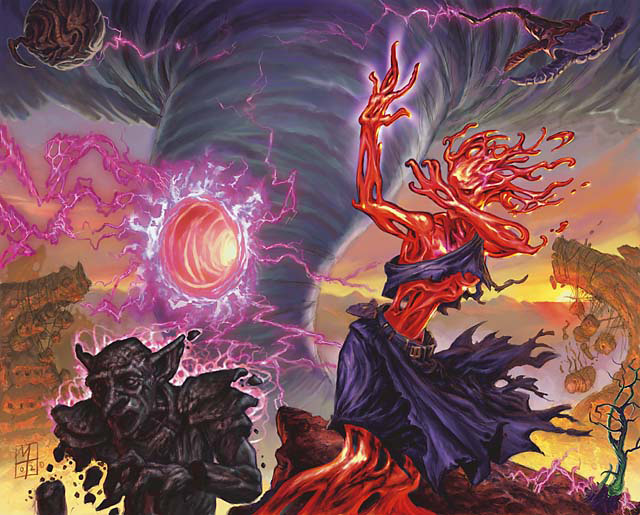 Grip of Chaos by Mark Tedin 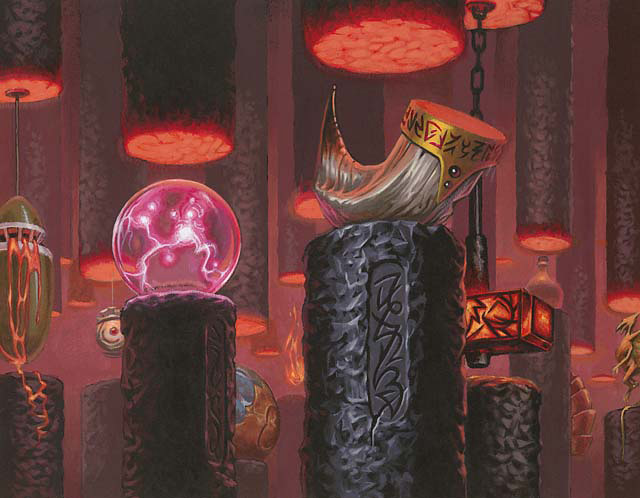 Are either of these cards in Time Spiral? No. Are either of these cards good? Not hardly. But these two red enchantments have art that tickles me to no end. Grip of Chaos features two of Tedin’s prior creations – Tetravus and Dark Sphere – flying about in the chaos, and Cavotta’s Shrine shows off many old school red favorites, including Ball Lightning, Chaos Charm, the Hammer of Bogardan, and the claw of the infamous Shivan Dragon. As Doug Beyer said in his feature article this week, “They [Easter Eggs] give back to you, the dedicated player, as a bonus for the time you've spent on Magic. They congratulate you on your hard work and promise you another special tidbit if you look just a tiny bit closer. They reward your fandom.”

I just love being rewarded for my own fandom.

When I started working here, I was the content manager for magicthegathering.com, and one of my duties was making the daily Magic Arcana. In the time since, that particular responsibility has fallen to Doug, and he and I have made a life’s work out of highlighting Easter Eggs. He linked to several in his column, and I dug through the archives to find several of my own favorites. Here’s a non-comprehensive list, worthy of a bunch of clicks and the next few minutes of your life.

A kind of Easter Egg that I always enjoyed as a player was the discovery that two pieces of art fit together to make a larger whole. Perhaps you’ve noticed that Akroma, Angel of Wrath and Phage the Untouchable have art that links up. Or that all of the Kamigawa basic lands link up to make five small murals. Here are some more such art-sharing Arcana that you may or may not have discovered on your own:

As designers and developers, Time Spiral presented a unique opportunity to use nostalgia as a way to get our own “Easter Eggs” into the game. The set is riddled with plenty of “Did you realize?” surprises, and not just in names, art, and flavor text. The mechanics of several cards are often links to older cards – some overtly, others more subtly.

The rare morph cycle (Weathered Bodyguards, Vesuvan Shapeshifter, Liege of the Pit, Fortune Thief, and Thelonite Hermit) is another very obvious set of throwbacks, as are the five members of the Magus cycle (Magus of the Disk, Magus of the Jar, Magus of the Mirror, Magus of the Scroll, and Magus of the Candelabra), but did you know that the rare Sliver cycle (Pulmonic Sliver, Psionic Sliver, Plague Sliver, Sedge Sliver, and Fungus Sliver) were also direct copies of older cards? Check out Avenging Angel, Psionic Entity, Juzam Djinn, Sedge Troll, and Fungusaur.

Those may be all the cycles, but they’re hardly all the little morsels we threw in as a wink and a nod to our long-time players. I hope all of you enjoy the search through the set for more such nuggets.

This coming Monday is the zero-hour for our three remaining Great Designer Search contestants. They’ll be arriving here in Renton for some interviews, and then the winner will be announced at an exclusive club soiree at a hot night spot in the shadow of the Space Needle.

We’ll have all kinds of goodies from that shindig – pictures, video, the whole nine yards, including the formal announcement of the deserving winner – up on our site on Friday, December 22. You’ll want to make sure to check out who will be joining our team after weeks of grueling competition. Plus, you may catch some video of our celebrity DJ for the party – Efren Ramirez, Napoleon Dynamite’s Pedro. Mark your calendars, and check back on the 22nd to put yourself in the middle of the party! I’ll be seeing you again with fresh content in 2007. Happy Holidays!

Remember, check back on the 22nd to see if you were right!

Posted in Latest Developments on December 15, 2006