Posted in Latest Developments on December 7, 2007

Hakim, Loreweaver comes out on Magic Online this week, which takes me back more than ten years down memory lane, strolling past Auras I have Aura of Silence, Dingus Staffs I have decoded, and Bubbles I have Bubble Matrix. In the summer of 1997 when Weatherlight arrived, I was enjoying my final high school summer, getting ready for college, and summoning a hell of a lot of Hakim, Loreweaver. I was a very dedicated casual player, playing tons of Magic every week, but having played only one sanctioned tournament in my life. It was still months before I would be swept away by the Magic tournament crowd I would encounter at Harvard. Looking over Weatherlight today brings back a lot of very specific memories of awesome Weatherlight decks I built and enjoyed back then. The memories are so vivid that I'd like to show you some of the supercool combos the decks revolved around, just like I'd show you back then.

As a bonus section at the end, I'll explain the reasons for the recent shift in tournament-legal dates for new Magic sets.

First of all, it's worth taking note how far the design technology of Weatherlight had advanced since the small sets in the previous couple of years. Don't get me wrong, I love those early Magic sets, and the newness, creativity, and accuracy of their ideas is incredible. Alpha is my favorite Magic set of all time, and the one I most admire, because of the astounding number of elements Richard Garfield got so perfectly right before there was any foundation on which to build. With only superficial changes all the way from then until now, I find Garfield's original Alpha color pie to be truly a work of art.

Having said that, you can see that Mirage block is dramatically more advanced in modern Magic design and development theory than anything before it. And of the Mirage block sets, Weatherlight most of all. Here's a quick metric to show what I mean. Let's compare Visions and Weatherlight to the preceding four small sets in how many cards each set happens to have had promoted to Tenth Edition, ten years later. The Tenth Edition designers and developers had dozens of sets to choose from when putting the new core set together, so any particular card getting in to Tenth Edition had to pass a high standard of quality, simplicity, interesting gameplay, appropriately curved numbers, and purity of concept. So how do the sets stack up?

The Dark
Fountain of Youth
(1)

The Dark, Fallen Empires, and Alliances all have their merits, but many of the cards lack simplicity (having tons of extraneous text), and tons of the cards are terribly weak in power level. Mirage, Visions, and Weatherlight design and development had evolved past all of that. You really see the proof when you notice only one card each from The Dark, Fallen Empires, Homelands, and Alliances meeting the right standards to be promoted into Tenth Edition, whereas Visions provides seven cards, and Weatherlight an incredible thirteen. (Mark Gottlieb was the first to point this out.) My hat is off to the Mirage block teams for bringing design and development theory such a huge leap forward in the space of just one year—one of the largest single years of advancement in the history of the game.

Here are the Weatherlight decks I remember playing most fondly. They weren't high power level, they weren't cut-throat, and it didn't matter. They were incredibly fun, and they kept me in Magic head over heels. Perhaps somewhere in the last ten years you can even find a card that makes some of these combos better!

This is a classic Johnny card, having no obvious application, and in those days I was a classic Johnny. My Teferi's Veil deck was blue-red featuring Ball Lightning and Thalakos Seer. If Ball Lightning went unblocked, Teferi's Veil saved it before the end-of-turn sacrifice. When Thalakos Seer attacked (and was almost never blocked), the phasing rules of the era said that while "comes into play" effects didn't trigger from phasing, "leaves play" effects did trigger. Card drawing galore! That drew me into the blue-red Dracoplasm, which was a great way to gobble up Ball Lightnings into a more useful, more permanent form. Because I had Dracoplasm, I had some other guys with very high power and drawbacks to eat. Because I had those high-power guys and Ball Lightning, I had at least one Phyrexian Dreadnought to eat 12 power of temporary creatures or 12 power of creatures with drawbacks, and combine them into one unstoppable 12/12 Dreadnought. Those were the days.

Two Weatherlight cards plus an Alliances rare equal... total opponent destruction! Aether Flash was powerful on its own for the way it locked out all opponents' creatures with toughness 2 or less. My combo was to get Aether Flash, Dingus Staff, and Varchild's War-Riders in play all at once. In my upkeep the War-Riders's cumulative upkeep would pop out an ever-increasing number of 1/1 Survivors for my opponent. The survivors would all pop on arrival due to Aether Flash, causing Dingus Staff to deal ever-increasing damage to my opponent. Bam!

Alliances' Varchild's War-Riders stands as one of my favorite cards of all time to this day. It is such a great top-down concept, and it's such a great execution. The perfect finishing detail on the design is the way it has a very intentional trample AND rampage 1, so that the growing number of angry 1/1 Survivors it leaves in its wake can never ever defeat Varchild's War-Riders in a fight, or even slow it down, no matter how many there are. The 1/1 Survivor tokens can only cower in terror when the War-Riders stomp through, then hope to take revenge by hitting the War-Riders' controller while the War-Riders are tapped. It's a rare jewel when a card's concept and the execution are both so creative and so perfect.

Bubble Matrix was another puzzle for me to try to solve creatively, a bizarre symmetrical card that affected both players, just like Aether Flash and Dingus Staff. "Prevent all damage that would be dealt to creatures." How could I break the symmetry to my advantage? When you have this artifact out, the board stalls out like crazy. Size doesn't matter in creature combat anymore—everything that blocks just bounces off unharmed. So I wanted lots of small creatures so that Bubble Matrix could let them block forever and be unburnable... and they had to be small so that it benefitted them that Bubble Matrix canceled creature combats... but they had to do something useful even though they couldn't fight through opposing creatures either. Eureka! The deck I played was Bubble Matrix + Zuran Spellcaster + Prodigal Sorcerer + Clone + Norrytt + probably Pirate Ship. With the Bubble Matrix out, all the Tims blocked all day and shot their pings over the top. When I didn't draw the Bubble Matrix, I had to settle for using all the Tims to kill all the enemy creatures.

I believe that Regionals 2007 may have been my second lifetime sanctioned tournament, and I think I played a deck with Aura of Silence, Howling Mine, Gerrard's Wisdom, and Gaea's Blessing. My opponent sideboarded in a Forsaken Wastes and played it, turning off the lifegain of my Gerrard's Wisdom. I was low on life already, and I ticked below 5 life before I drew Aura of Silence. Argh. Forsaken Wastes's "Lose 5 life" clause had locked me into certain death.

If I disenchanted Forsaken Wastes with Aura of Silence I would lose 5 and die. Was there any way out? Think think. Oh I see! If I can destroy Forsaken Wastes with Aura of Silence, I'll lose 5 life and go to -3 life, but if I can cast Gerrard's Wisdom during the same phase, I can go back up to 8 life and survive. In those days, you could go below 0 life and survive as long as you went up to a positive number before the phase ended, at which time the game checked your pulse and declared you dead or alive. Sadly, I could not cast both the Aura and the Gerrard's Wisdom in time, and I lost the match. It was later in the week that I realized that you lose 5 life when you target Forsaken Wastes with a spell, but that Aura of Silence isn't a spell when you sacrifice it to destroy something, so I wouldn't have lost any life at all, and I have could have just destroyed the Forsaken Wastes as soon as possible. And probably won. To have had the opportunity to make such a cool play ("Aha! Aura of Silence trumps Forsaken Wastes's Trump-Disenchant clause!") and to have missed it was exquisitely frustrating. It's one of those misplays you carry around with you forever. 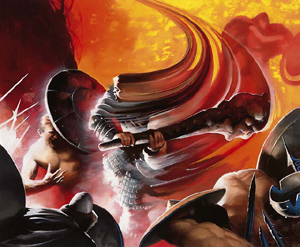 That's all for Weatherlight Week. Now for something completely different: There is an interesting tidbit attached to the recent announcement of evolutions to the Magic Online Prismatic and Magic Online Singleton formats made last Saturday here. Here is that part of the announcement if you missed it:

In other words, from Morningtide forward: As soon as you can buy cards, you can play them. Sounds pretty simple doesn't it? Here are the reasons for the policy change:

We will try hard to avoid scheduling big Constructed events on release weekends. We're not going to have Worldwide Regional / Provincial Championships happen on the same day a new set is released if it can be avoided.

With over ten thousand votes cast, this one was a squeaker. I have to admit, I had thought they would both put up at least 40% , but that the Goblins would win by a good 15%-20%. But the Elves pull out a heroic victory at the buzzer. Maybe the recent tournament success of Lorwyn-fueled Elves put them over the top.

Posted in Latest Developments on December 7, 2007